Accessibility links
Swarthmore Fraternities Disband Over Leaked Documents That Detailed Misogyny "We were appalled and disgusted by the content of these minutes, which led us to question our affiliation with an organization," current members of Phi Psi said in a statement Tuesday night. 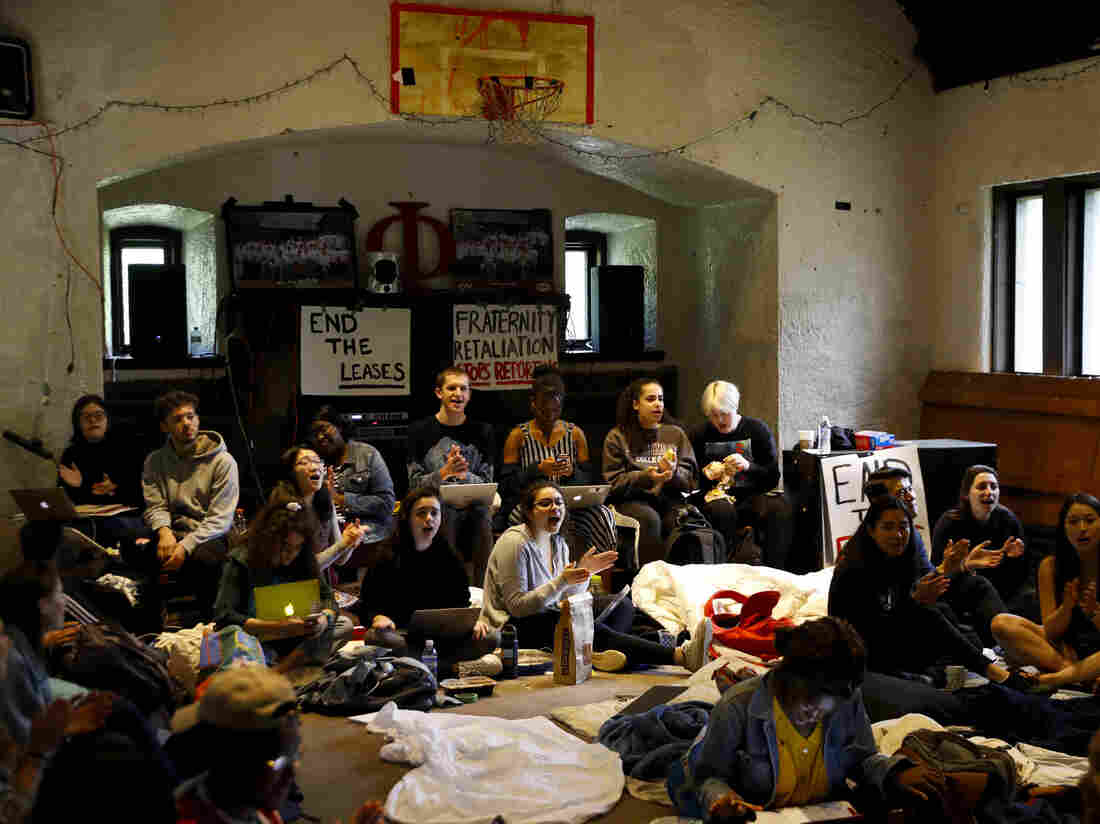 Swarthmore College students held a four-day sit-in at the Phi Psi fraternity house that ended Tuesday night after the organization said it had voted to disband. Delta Upsilon, the only other fraternity on campus, made a similar decision about an hour later. AP hide caption 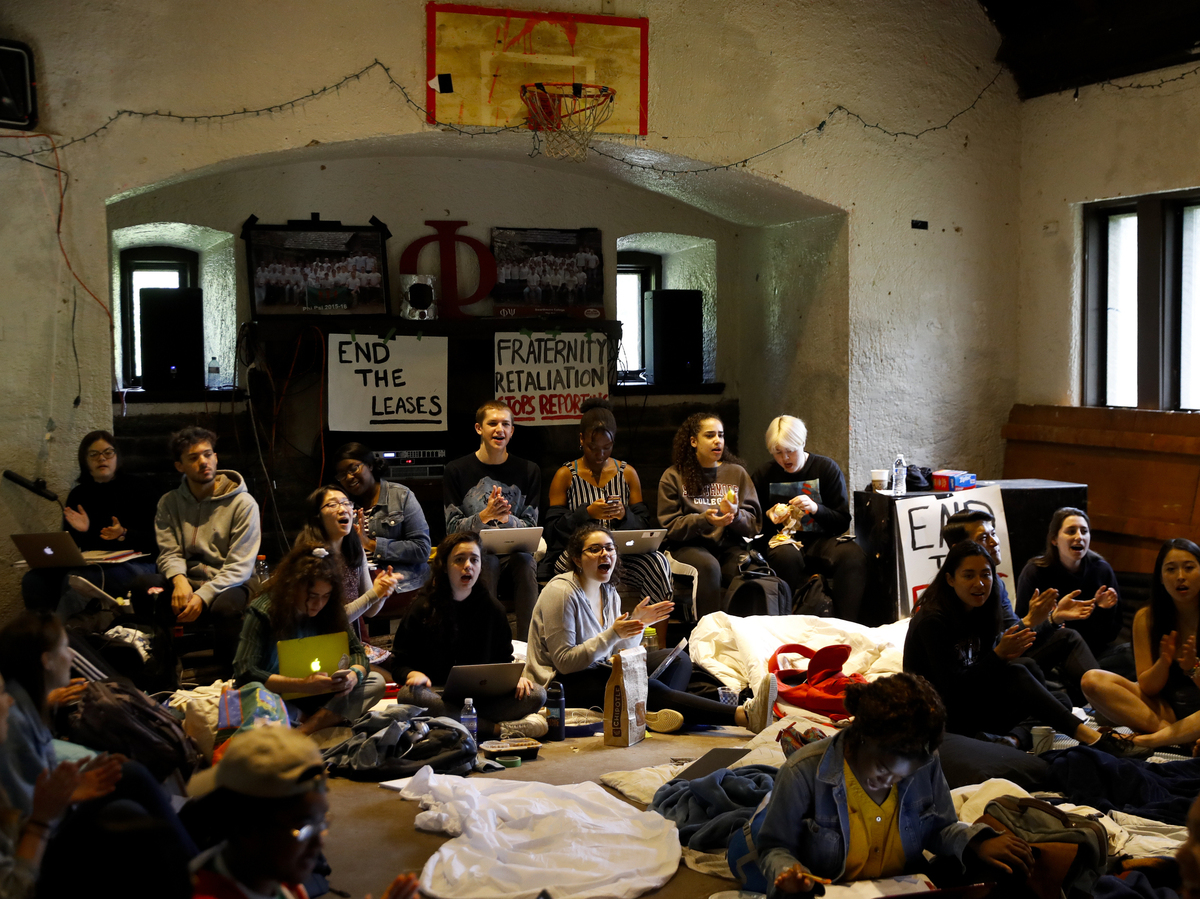 Swarthmore College students held a four-day sit-in at the Phi Psi fraternity house that ended Tuesday night after the organization said it had voted to disband. Delta Upsilon, the only other fraternity on campus, made a similar decision about an hour later.

The only two fraternities at Swarthmore College have unanimously agreed to disband and give up their houses, ending a four-day sit-in and weeks of protest by outraged students after the publication of documents chronicling years of misogynist, racist and homophobic remarks, as well as jokes alluding to sexual assault by members.

The decisions to dissolve Phi Psi and Delta Upsilon were announced on Facebook on Tuesday night, after what both said were weeks of deliberation.

The controversy began last month, after campus publications Voices and The Phoenix released anonymously leaked internal documents from Phi Psi, dating from 2010 to 2016.

The trove of files included minutes, detailing graphic sexual encounters with female students, lists of fraternity hazing challenges, and intimate videos and photographs of women that appear to have been taken without their consent. (In most instances, the papers report, the women have their backs to the camera.) One entry refers to an alleged "rape tunnel" and a "rape attic" in one of the fraternity headquarters.

Current members of both fraternities have noted that the actions described in the stories predate their association with the groups.

"The current members were in high school and middle school at the time of the writing of these documents," Phi Psi's statement reads. "We were appalled and disgusted by the content of these minutes, which led us to question our affiliation with an organization whose former members could write such heinous statements. We cannot in good conscience be members of an organization with such a painful history."

"Unfortunately, the wounds are too deep to repair, and the best course of action for all those involved is to disband the fraternity completely and give up the fraternity house," the statement said.

Similarly, Delta Upsilon said that after "much discussion," members had unanimously agreed that "disbanding our fraternity is in the best interest" of the university.

"We hope that our former house will provide a space that is inclusive, safe, and promotes healing," the statement said.

The Tumblr page contained anonymous accounts of sexual assault, including some that allegedly occurred in what some students refer to as the "rape attic," a second-story bedroom in one of the fraternity houses.

The reaction on campus was one of jubilation.

"It was earsplitting. People were screaming and singing and laughing," Amal Haddad, a freshman and a member of a group called Organizing for Survivors, told NPR.

Haddad is one of several student activists who organized the sit-in on the lawn and inside the stone house in the middle of campus that serves as Phi Psi's headquarters and is where dozens of students have said they experienced some type of unwanted touching, groping or sexual assault.

"There was also crying because a lot of work still has to be done to heal and transform. So much violence has happened here," she added.

Haddad disputes the fraternities' assertion that the misogynist and sexually aggressive behaviors described in the 117-page document are a thing of the past, calling it "nonsense."

"I know countless people who have been groped or assaulted this year alone," she said, adding the general attitude of fraternity members on campus is of "complete entitlement." 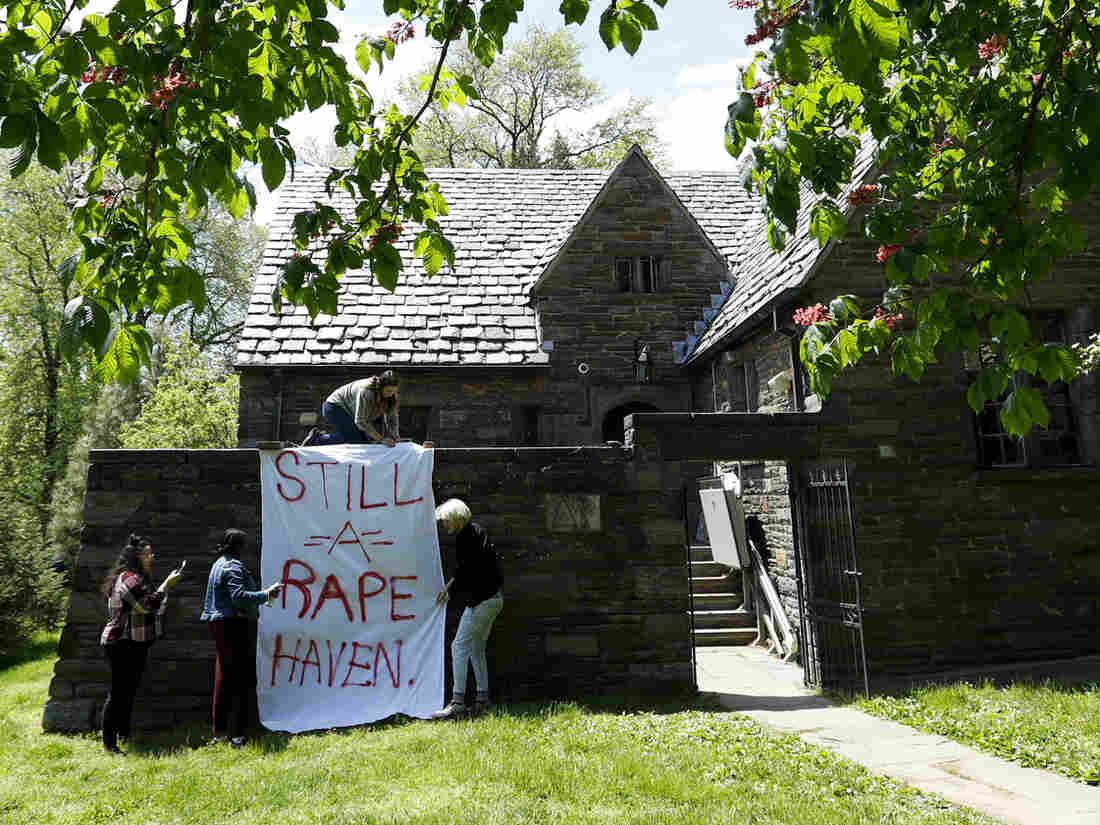 Swarthmore College students hung banners near the Phi Psi fraternity house during a sit-in on Monday. Demonstrators had been protesting after the publication of fraternity documents containing sexist, racist and homophobic comments. AP hide caption 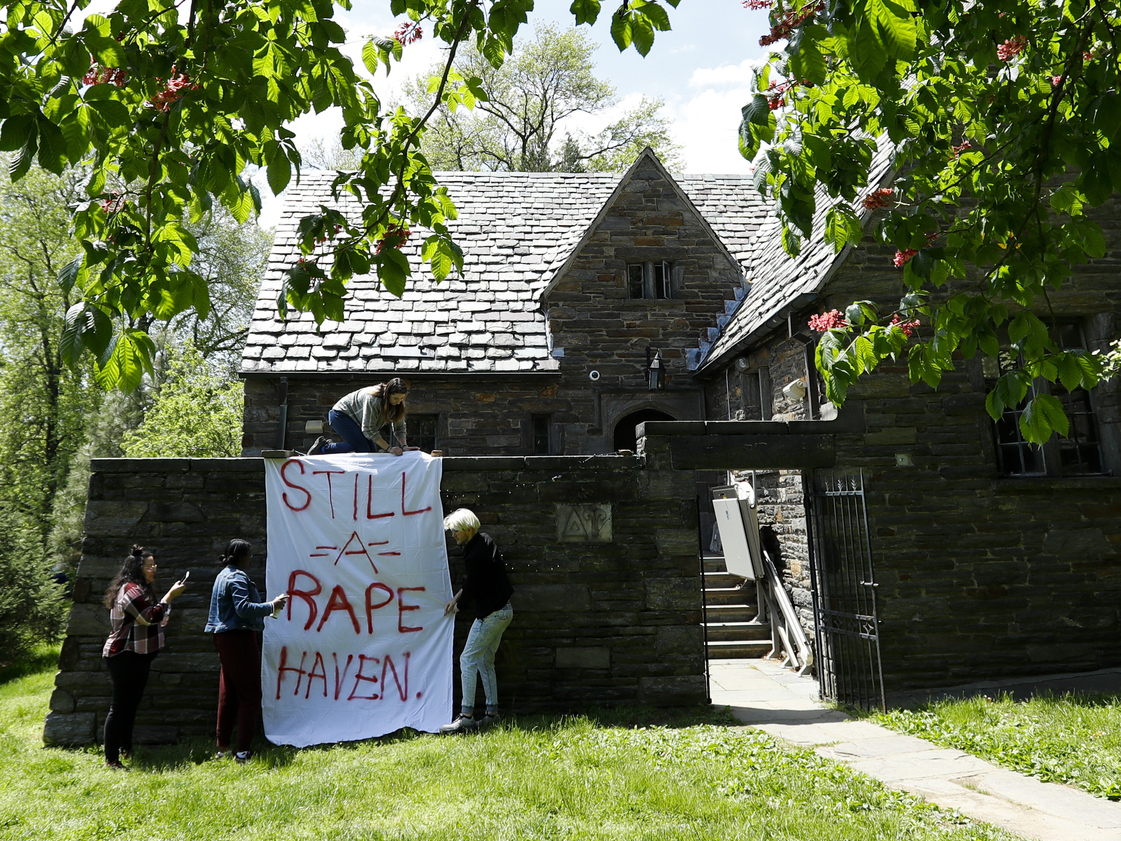 Swarthmore College students hung banners near the Phi Psi fraternity house during a sit-in on Monday. Demonstrators had been protesting after the publication of fraternity documents containing sexist, racist and homophobic comments.

In one entry from 2013, written shortly after a referendum to close the fraternities failed, said: "Like is there a hotter organization on campus right now than the Phi brotherhood? ... We just took a nice sloppy poop on that referendum and we control the social scene."

The writer then urged the group to create a sex trafficking ring, adding, "God that would be hot."

Another entry relays an anecdote about a Phi Psi member who took a walk around campus one night. "On Saturday he decided to take one of these strolls and came across a chick passed out faced first in front of trotter. We weren't given any real details as what occurred after he found her."

After reading through the documents, Haddad, who lives in the same hall as many fraternity members, said, "It's clear they haven't changed."

Frustration with the school's perceived inaction grew at the small liberal arts college after the documents were posted, and demonstrators began gathering in and around Phi Psi's building on Saturday. Four days of protests eventually prompted Swarthmore College President Valerie Smith to suspend fraternity activities pending the outcome of an external investigation.

Following the fraternities' announcements on Tuesday, Smith issued a statement saying, "We respect these students' decision to take this action, and we appreciate their strong condemnation of behavior described in the 2013-16 materials that have recently come to light."

The university plans to continue work by the Task Force on Student Social Events and Community Standards that began last spring, Smith said.

Last year, Smith rejected the task force's recommendations on changes to Greek life on campus, including the suggestion to end leases to Phi Psi and Delta Upsilon.

"We have heard heartbreaking stories from students who feel unwelcome to the point of wanting to transfer out of our community," Smith said this week. "Those stories have come from across the spectrum of our student body — from student protesters to fraternity members.

"Stories such as these reflect our failure to realize the values we so often espouse," she said, adding that there is "no evidence that any current student participated in the behaviors documented in the unofficial 'minutes.' "

A previous version of this story incorrectly said the fraternity involved was Phi Kappa Psi. The Swarthmore fraternity Phi Psi is not affiliated with that national group.