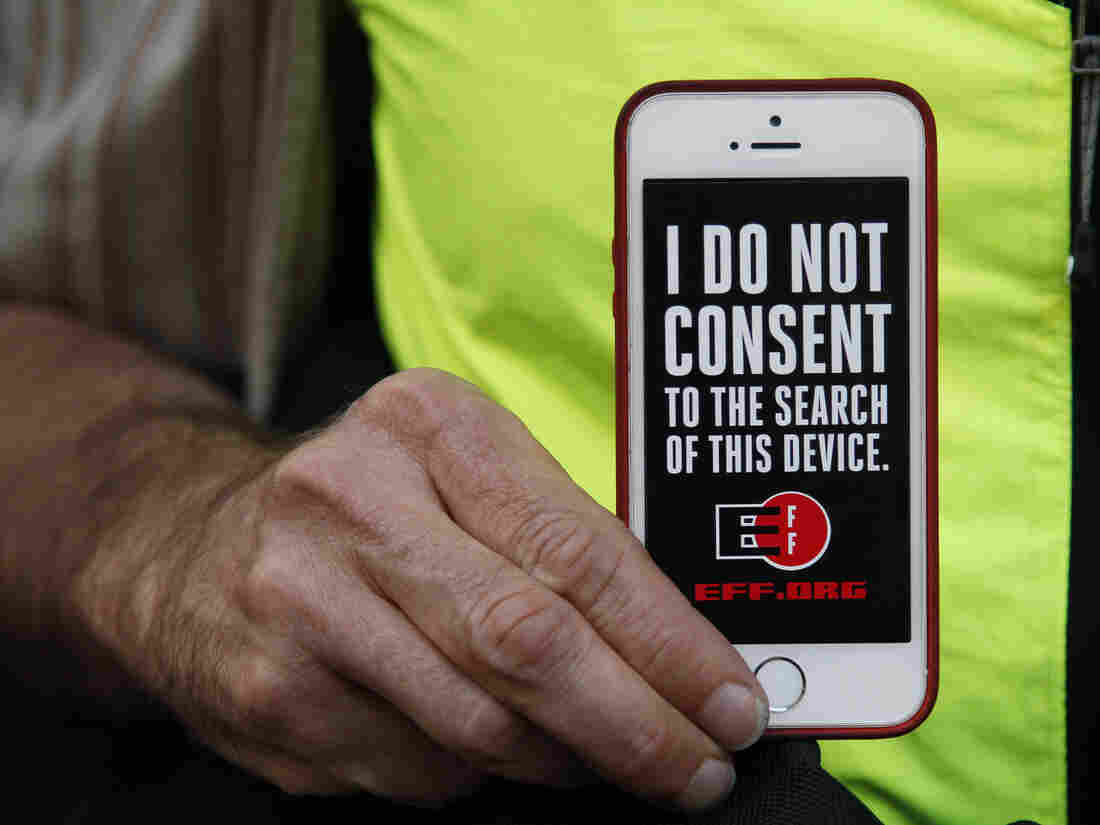 In this 2016 photo, a man holds up his iPhone during a rally in support of data privacy outside the Apple store in San Francisco. Watchdog groups that keep tabs on digital privacy rights are concerned that U.S. Customs and Border Protection agents are searching the phones and other digital devices of international travelers at border checkpoints in U.S. airports. Eric Risberg/AP hide caption 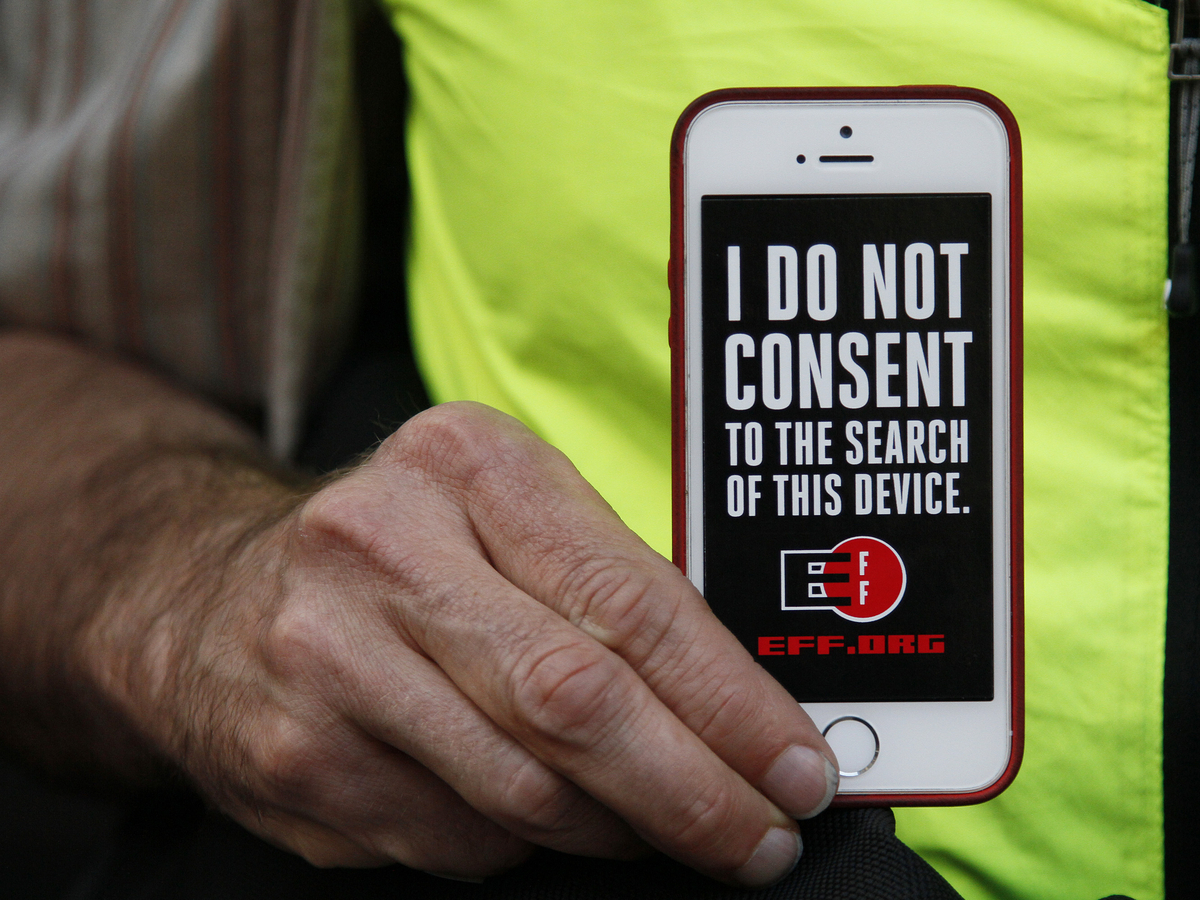 In this 2016 photo, a man holds up his iPhone during a rally in support of data privacy outside the Apple store in San Francisco. Watchdog groups that keep tabs on digital privacy rights are concerned that U.S. Customs and Border Protection agents are searching the phones and other digital devices of international travelers at border checkpoints in U.S. airports.

The American Civil Liberties Union says it has uncovered new evidence that federal border agents are violating the Constitution when they search travelers' electronic devices.

The ACLU, along with the Electronic Frontier Foundation, sued the federal government in 2017, alleging that its "warrantless and suspicionless searches" of electronic devices at the U.S. ports of entry violated the First and Fourth amendments. Lawyers now say that, through depositions of border agents, they have learned that the scope of the warrantless searches has expanded far beyond the mere enforcement of immigration and customs laws.

Border officers have the authority to search belongings for contraband, or to determine who is admissible into the U.S., the ACLU said. But agents now "claim authority to search travelers' devices for general law enforcement purposes, such as looking for potential evidence of illegal activity beyond violations of immigration and customs laws," plaintiffs wrote.

These practices violate the Fourth Amendment's protection against unreasonable search and seizure, the ACLU wrote. They also violate the First Amendment, attorneys said, because people traveling to the U.S. might censor themselves, knowing that a border agent might look through their phone.

In a filing this week in the U.S. District Court in Massachusetts, the lawyers asked the government to rule in their favor without a trial.

"Let's get one thing clear," the ACLU said in a statement. "The government cannot use the pretext of the 'border' to make an end run around the Constitution."

The government has said its searches are necessary to protect the country. The Department of Homeland Security did not respond to an Associated Press request for comment; ICE and CBP said they would not comment on pending litigation.

The case was filed on behalf of 11 defendants, including a limousine driver, two journalists, and a NASA engineer. Ten of the plaintiffs are U.S. citizens, and one is a lawful permanent resident.

More Travelers Entering U.S. Are Being Asked For Their Cellphones And Passwords

Searches of international travelers' electronic devices have spiked in recent years. According to the lawsuit, border officers searched the smartphones and laptops of more than 33,000 international travelers in 2018 — an increase of almost 400% from three years earlier. Those searches, the complaint says, violate the Fourth Amendment's protections against unreasonable search and seizure.

"Border searches of electronic devices intrude deeply on the private lives of all travelers and raise unique concerns for the journalists, lawyers, doctors, and others who carry particularly sensitive information about their news sources, clients, and patients," the attorneys wrote. They argued that the warrantless searches "turn the border into a digital dragnet."

A Customs and Border Protection policy implemented in 2018 permits two kinds of searches: basic and advanced. In a basic search, an officer looks through an electronic device manually. In an advanced search, the officer connects external equipment to the device in order to review and sometimes copy its contents.

CBP policy allows basic searches without any suspicion of wrongdoing; advanced searches require a "reasonable suspicion of activity in violation of the laws enforced or administered by CBP" or a "national security concern." U.S. Immigration and Customs Enforcement has a similar policy permitting both basic and advanced searches.

In a legal filing, the agencies said their searches were "a crucial tool for detecting evidence relating to terrorism and other national security matters" and "can also reveal information about financial and commercial crimes."