Accessibility links
WikiLeaks' Julian Assange Begins A Battle To Fight Extradition To The U.S. The WikiLeaks founder said he did not wish to surrender himself "for doing journalism that has won many awards and protected many people." The extradition case could take many months, the judge said. 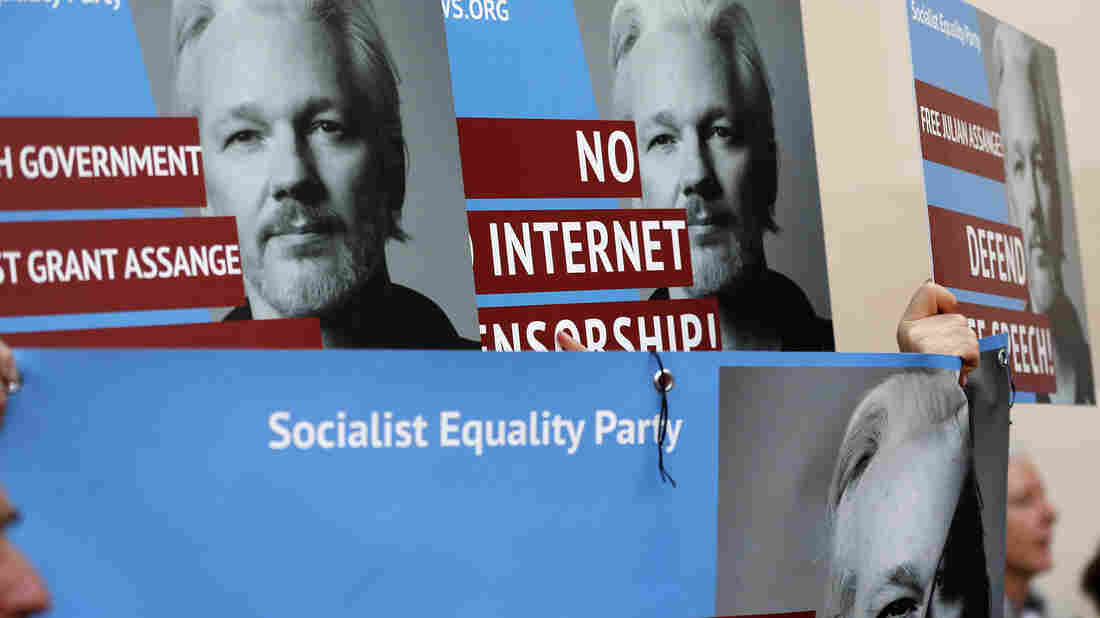 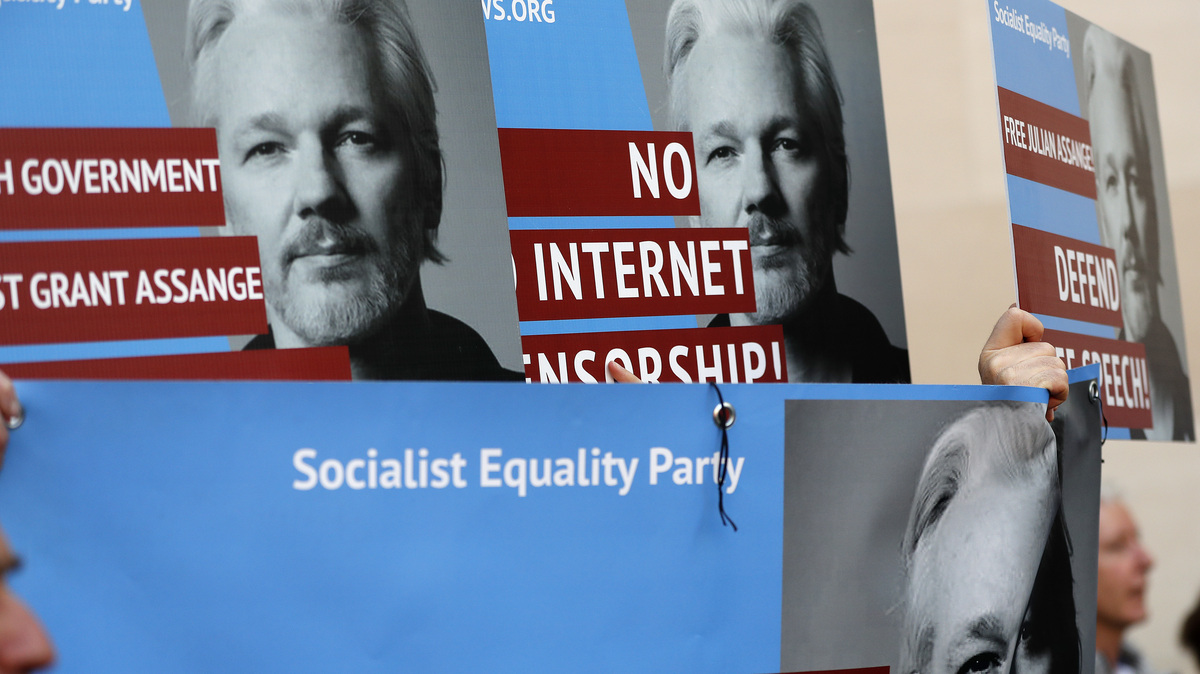 Protesters carry posters depicting Julian Assange outside Westminster Magistrates Court in London on Thursday where the WikiLeaks founder appeared by video link from prison for an extradition hearing.

Julian Assange has vowed to fight extradition to the United States, in what could become a long and complicated legal battle.

At a court in London, Judge Michael Snow told Assange Thursday that he could consent to being extradited to the United States, as his supporters gathered inside and outside the courtroom, chanting and holding signs demanding his freedom.

"I do not wish to surrender myself for extradition for doing journalism that has won many awards and protected many people," Assange told the court from prison through a video link, according to media reports.

The founder of WikiLeaks was arrested in April. The Ecuadorian Embassy in London essentially evicted the 47-year-old after giving him nearly seven years of refuge. Assange was seen being pulled out of the embassy doors and into a police vehicle. And so began a new era for the controversial figure.

In what the U.S. Justice Department recently called "one of the largest compromises of classified information in the history of the United States," Assange is accused of helping Manning access thousands of documents and communications on the wars in Iraq and Afghanistan, as well as diplomatic cables and briefs on Guantanamo Bay detainees. WikiLeaks published many of those documents in 2010 and 2011.

Thursday's extradition hearing followed a court appearance Wednesday in which a court sentenced Assange to 50 weeks in prison for jumping bail. That judge described Assange's actions as a deliberate effort to postpone justice. Assange had been wanted in Sweden for questioning over sexual assault allegations, which he has denied.

Ben Brandon, the lawyer representing the U.S. government, told the court on Thursday that Assange could face a maximum prison sentence of five years if he is convicted, according to media reports. Investigators based their allegations on exchanges between Assange and Manning in chatroom communications, Brandon said.

Two more hearings were reportedly scheduled for May 30 and June 12, after Assange's lawyers receive the full contents of the U.S. extradition request. The judge predicted the case will take "many months."

Prosecutors in Sweden have left open the possibility of resuming an investigation into rape allegations against Assange, a move that could force British officials to weigh competing extradition requests from both countries.

Bradshaw added that Assange's lawyers have already expressed concern over whether he could receive a fair trial in the United States. They may argue that the extradition request was made for a political purpose or on impermissible grounds, she said.

London was not the only place where Assange's supporters congregated. They also gathered in front of the U.S. Embassy in Berlin. There, one devotee read a statement written by former National Security Agency contractor Edward Snowden who leaked classified information.

"It is not just one man who stands in jeopardy but the future of the free press," the document quoted Snowden saying.

Chinese dissident artist Ai Weiwei told NPR that he was "very disappointed" by the U.S. position.