Accessibility links
Mystery Skype Helps Some Educators Teach Geography Teachers are using a game called Mystery Skype to teach geography and connect with classes around the country and world. 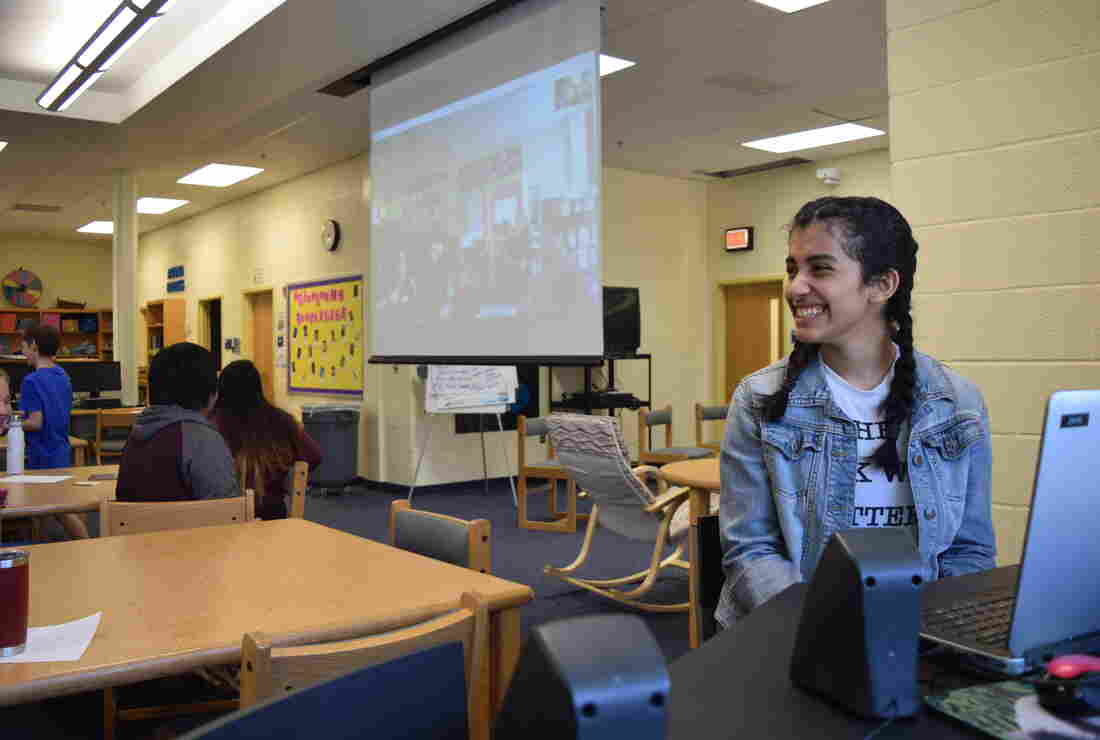 Rawan Nasir speaks to another classroom over video chat during a game of Mystery Skype at Glasgow Middle School. Amanda Morris/NPR hide caption

The rules for playing Mystery Skype are simple: Students can only ask "yes" or "no" questions, and whichever class guesses the other's location first wins.

At Glasgow Middle School in Alexandria, Va., an eighth-grade class plays through video chat with another classroom.

"Are you north of Virginia?"

"Do you border an ocean?"

"Is your state one of the original 13 colonies?"

After about 45 minutes of back-and-forth, the students think they have it.

A chorus of replies comes out of the computer speakers: "They found us! Yes we are!"

Across the country — and even around the world — teachers are using this educational game to improve students' comprehension of geography, a subject students in this country struggle with.

According to a 2014 study (the most recent data available) from the National Assessment of Educational Progress, 73% of eighth graders are less than proficient in geography. 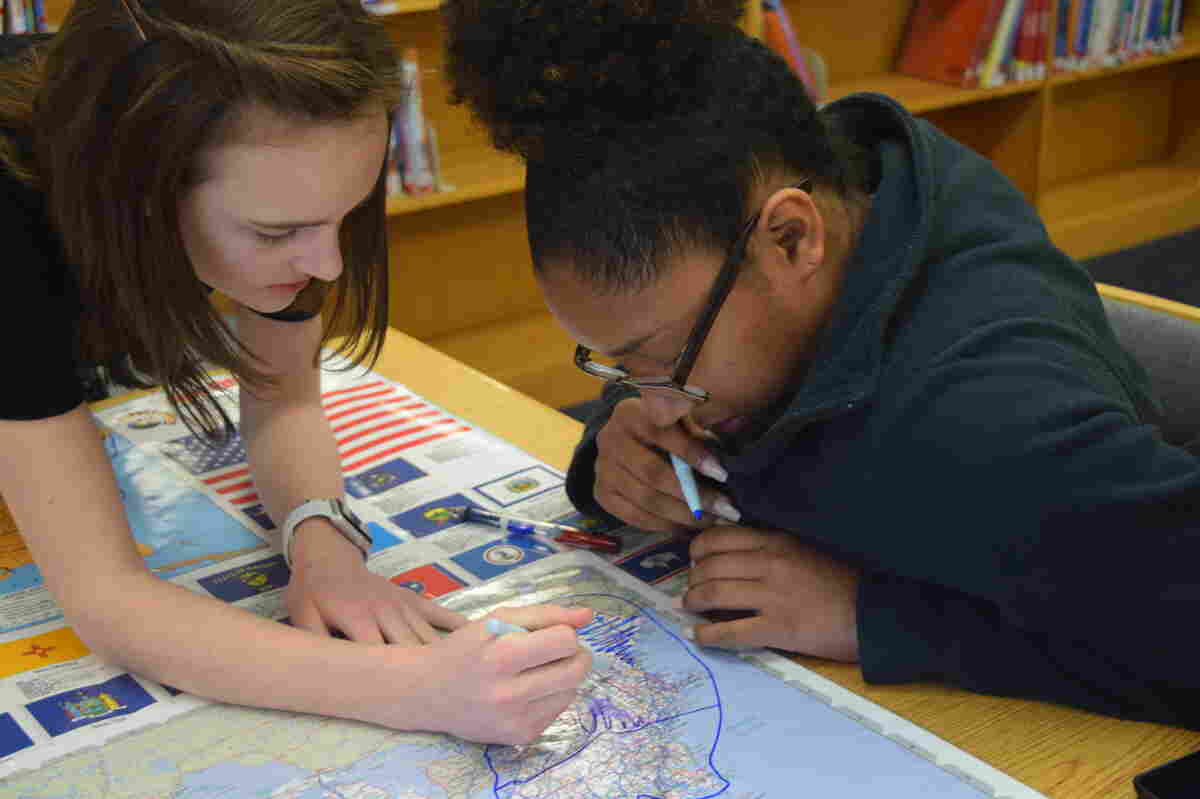 Glasgow Middle School students Sarah Hoffmann, left, and Sophia Turay scribble on a map during a game of Mystery Skype while they try to narrow down another class's location. Amanda Morris/NPR hide caption 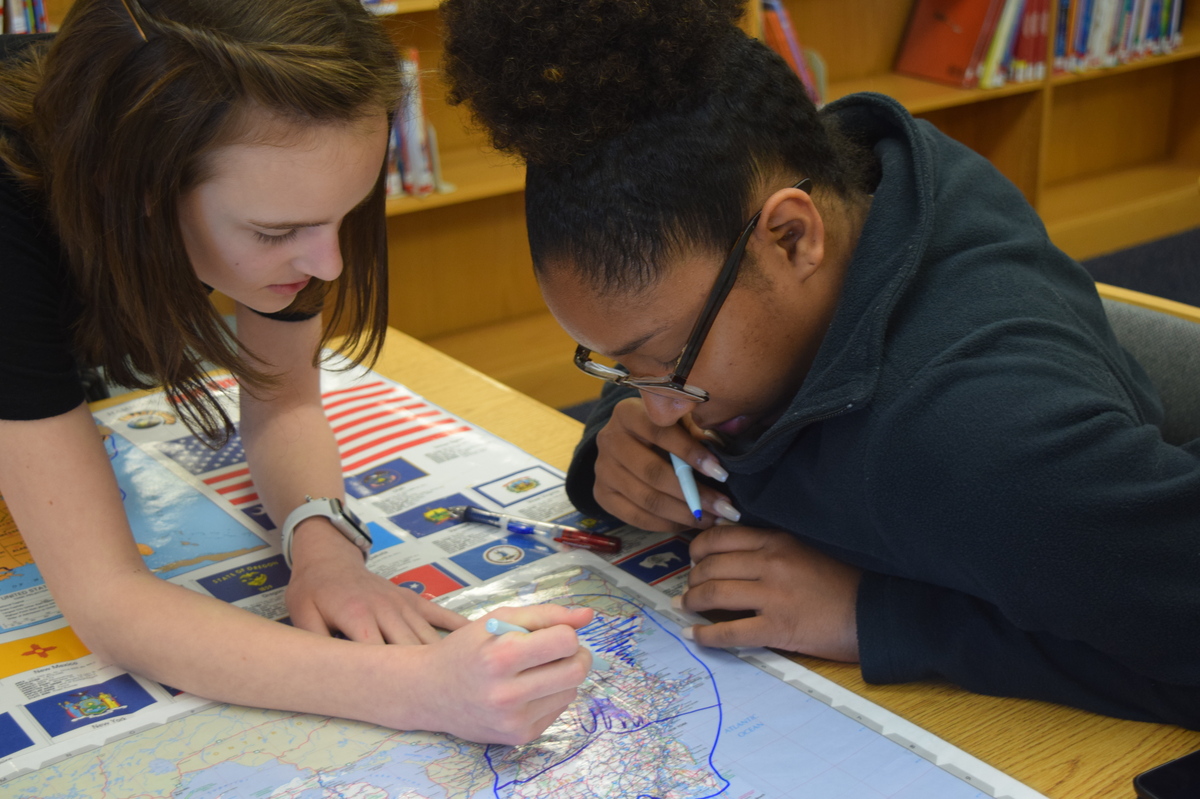 Glasgow Middle School students Sarah Hoffmann, left, and Sophia Turay scribble on a map during a game of Mystery Skype while they try to narrow down another class's location.

Part of the problem, according to Audrey Mohan, the former president of the National Council for Geographic Education, is that students don't spend enough class time on the subject. She looked at data from the 2014 assessment and estimated that educators only spend about 20 minutes a week teaching geography.

When teachers do focus on geography, Mohan said students are often taught to memorize names on a map — but that doesn't work. She compares it to trying to learn chemistry by memorizing the periodic table.

"If you had just memorized the periodic table and then thought you knew chemistry... you don't know chemistry. You don't know how any of those things interact with one another," she said. "The same is true for geography. If you just memorize all the capitals of the United States, you're just skimming the surface of what geography is really about."

That's where Mystery Skype comes in. The origins of the game are unclear, but after the idea started to spread, Microsoft asked a group of six teachers to write an online guide to the game.

Teaching 2.0: Is Tech In The Classroom Worth The Cost?

In addition to teaching students geography with context, Mohan believes the game can help them develop skills such as critical thinking, leadership and collaboration.

It also gives them a chance to meet people around the world — albeit only those who have access to the right technology.

In rural Mondamin, Iowa, fifth grade teacher Gina Ruffcorn has been playing the game with her class for years.

There are only 27 kids in the entire fifth grade at West Harrison Elementary School and Ruffcorn says that many of those children don't have a lot of exposure to the world outside Mondamin.

"Our area offers almost no ethnic diversity whatsoever," Ruffcorn said. "Everybody that my kids run into on a daily basis...pretty much looks just like them."

Mystery Skype has connected Ruffcorn's students to classrooms from all over the world — India, Russia, Japan, Kenya, Croatia and Mexico, to name a few. 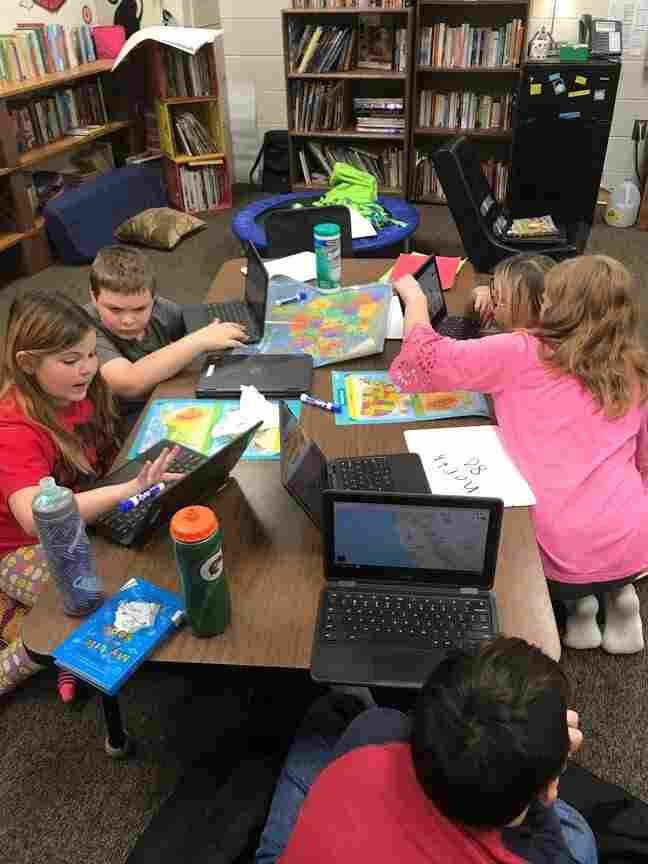 Ruffcorn says that learning about other places gives her students a perspective on their own hometown.

For example, it sometimes takes her students' parents about an hour to get to the grocery store. But, when they spoke with a class in New York City, they learned that some of the students' parents didn't even know how to drive.

The game has improved her students' performance on geography tests, Ruffcorn said, but she also believes Mystery Skype has better prepared her students for an increasingly global workforce.

At Wallenpaupack South Elementary School in Newfoundland, Penn., teacher Michael Soskil has created variations of the game, including Mystery Animal: Instead of guessing location, fifth-graders in his science class must guess the other class's chosen animal.

This way, the game fits into his science curriculum and his students can video conference other classes more than once.

"You get to build relationships and those relationships allow learning to happen in a different way," he said. "That's really where empathy and compassion get built... when you have a long term relationship with another class."

These are relationships that Soskil's students wouldn't build otherwise — about 60% of his students live below the poverty level, so opportunity for travel is often limited.

But with Mystery Skype, his students get a chance to meet people from all over the world.