Accessibility links
StoryCorps: Kids Of Holocaust Survivors Learned Their Parents' Life Philosophy At StoryCorps, Abe and Esther Schuster remember their parents' joyful outlook, even as Holocaust survivors. "They never were kids," Abe said. "So sometimes you can make up for things later." 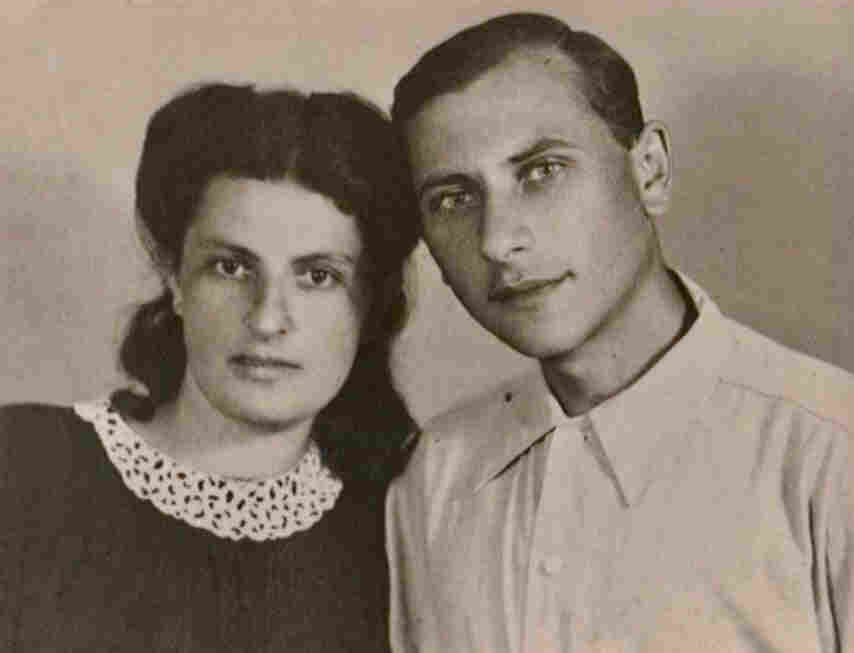 Pauline and Judel Schuster on their wedding day in Stalingrad in April 1945. Judel died in 1997; Pauline died in 2011. Courtesy of Esther and Abe Schuster hide caption 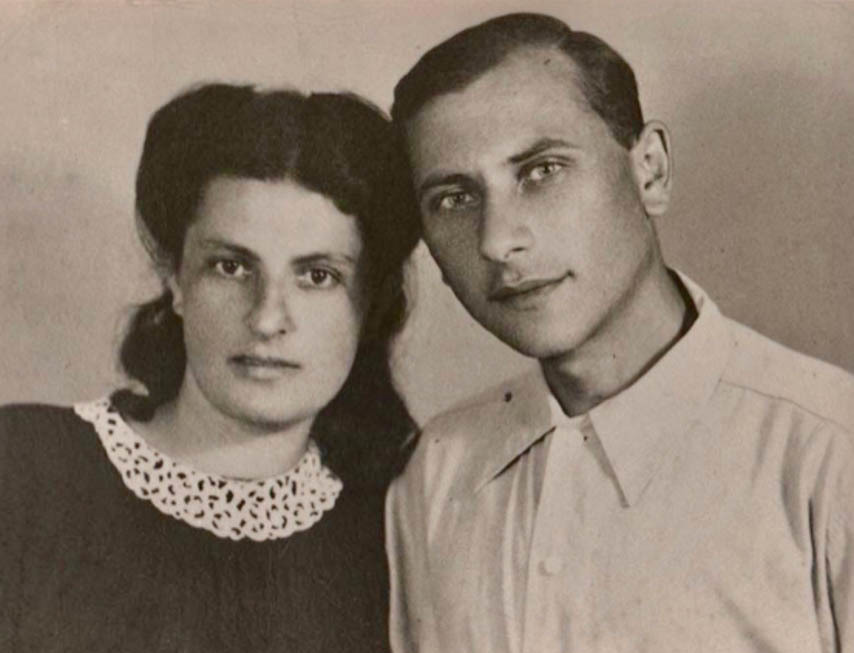 Pauline and Judel Schuster on their wedding day in Stalingrad in April 1945. Judel died in 1997; Pauline died in 2011.

Courtesy of Esther and Abe Schuster

After surviving the Holocaust, Judel and Pauline Schuster resettled in Buffalo, N.Y., to start a family.

This Holocaust Remembrance Week, two of their children, Abe and Esther Schuster, reflect on their parents' joyful view of life in a recent StoryCorps conversation.

Abe said that one evening when he was in high school, he introduced his parents to his calculus teacher and her husband at a neighborhood restaurant.

"Dad said, 'So, Mrs. Dinwoodie, how is mine Abey doing in the math class?' " Abe, now 60, recalled in a fond imitation of his father.

Mrs. Dinwoodie didn't hold back, Abe said. "She said, 'Well, he sleeps a lot in class, he stares out the window, he doesn't do his homework and he doesn't seem to be paying attention very well.' "

But Judel Schuster was unfazed. 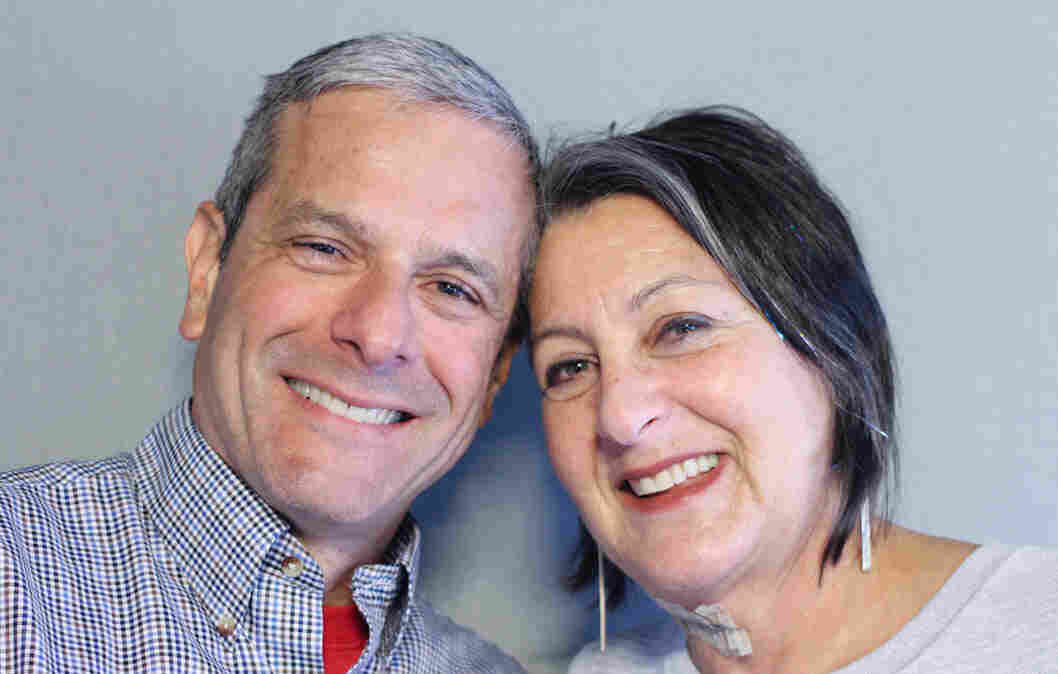 Siblings Abe and Esther Schuster in Birmingham, Ala., for StoryCorps in February, where they remembered their parents, Holocaust survivors Judel and Pauline Schuster. Jacqueline Van Meter for StoryCorps hide caption 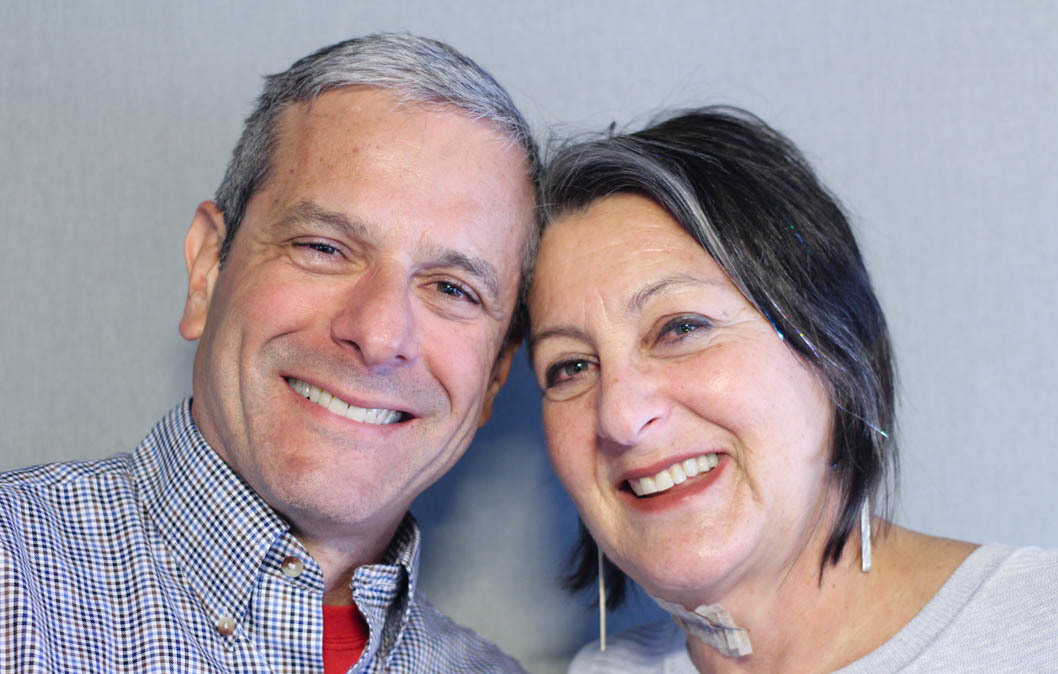 Siblings Abe and Esther Schuster in Birmingham, Ala., for StoryCorps in February, where they remembered their parents, Holocaust survivors Judel and Pauline Schuster.

"Dad said, 'You know, Mrs. Dinwoodie, you should be ashamed of yourself,' " Abe said. " 'My Abey has jobs, he works after school, he knows a lot of friends and has fun in the evenings, so of course he's going to be sleepy. And probably you are boring him.' "

Esther, now 67, knew no different. "We could do no wrong in their eyes," she said.

Like when Esther got upset about falling short of an A grade.

"And they'd go, 'Eighty-nine! That's wonderful — you did the best you could,' " Esther said. "The other thing they would always say to us was, 'The only thing that's important is you learn how to do something that you can make a living at.' Because, really, they knew that that was survival."

Abe said he first realized that he and his sister were children of Holocaust survivors around middle school.

"I knew they were from Europe. I knew they'd lost their family," he said. "But I think the first time, Esther, I really figured it out was in eighth grade."

In history class, he remembered being shown films depicting the horrors of concentration camps. "I think that's the first time I actually realized what happened to our grandparents and aunts and uncles," Abe said.

Esther said she'd known that their names alone revealed some of their family history.

'Time Is Running Out': Museum Curator In Florida Races To Preserve Holocaust Items

"We knew we were named after people who died too soon — who there was a lot of pain about," she said.

Esther is named after Pauline's mom. For their parents, the siblings said, being named after their deceased relatives was a way of "re-creating" the dead.

As a result, she said, "I think that we had this vision of life and death that was maybe different from other kids our age."

Their parents missed out on the joys of childhood, Abe said. "They never were kids, they never played, so sometimes you can make up for things later."

According to the Schuster children, that meant their parents found pleasure in the little things. For their mom, a short trip to Crystal Beach in Ontario, Canada, involving a pit stop for orange soda, evoked pure excitement.

"You would've thought somebody bought her a diamond ring," Esther said.

Abe remembered how the neighborhood pool brought out the little kid in their dad. He would go down the water slide while the other kids watched.

"We were lucky," Esther said. "We were very lucky to have them as parents — despite their suffering, despite their pain. They were able to teach those lessons of 'Live now, love hard and appreciate everything.' "