Accessibility links
Facebook Bans White Supremacists And Anti-Semites From Platform The social media platform said it was banning the high-profile individuals for engaging in hate. Jones called it an "authoritarian" move. 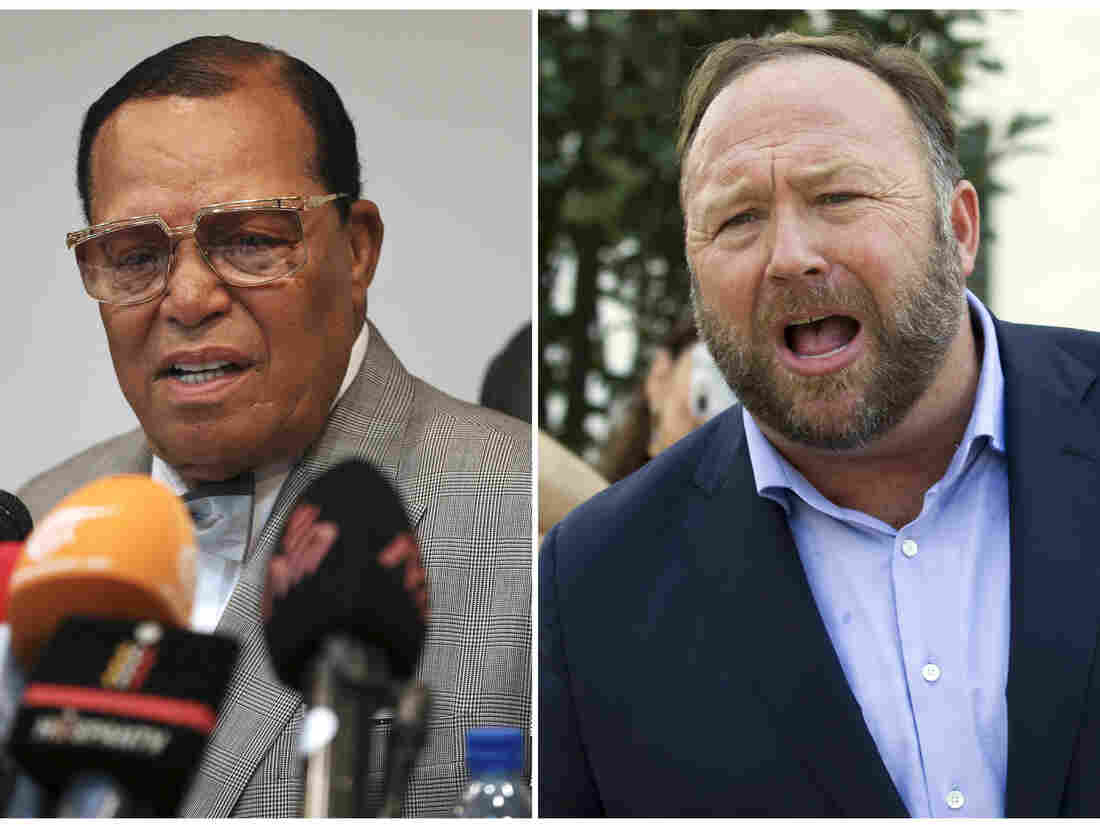 This combination of 2018 file photos shows minister Louis Farrakhan, the leader of the Nation of Islam, and conspiracy theorist Alex Jones. Facebook has banned their accounts for violating its rules against hate speech. AP hide caption 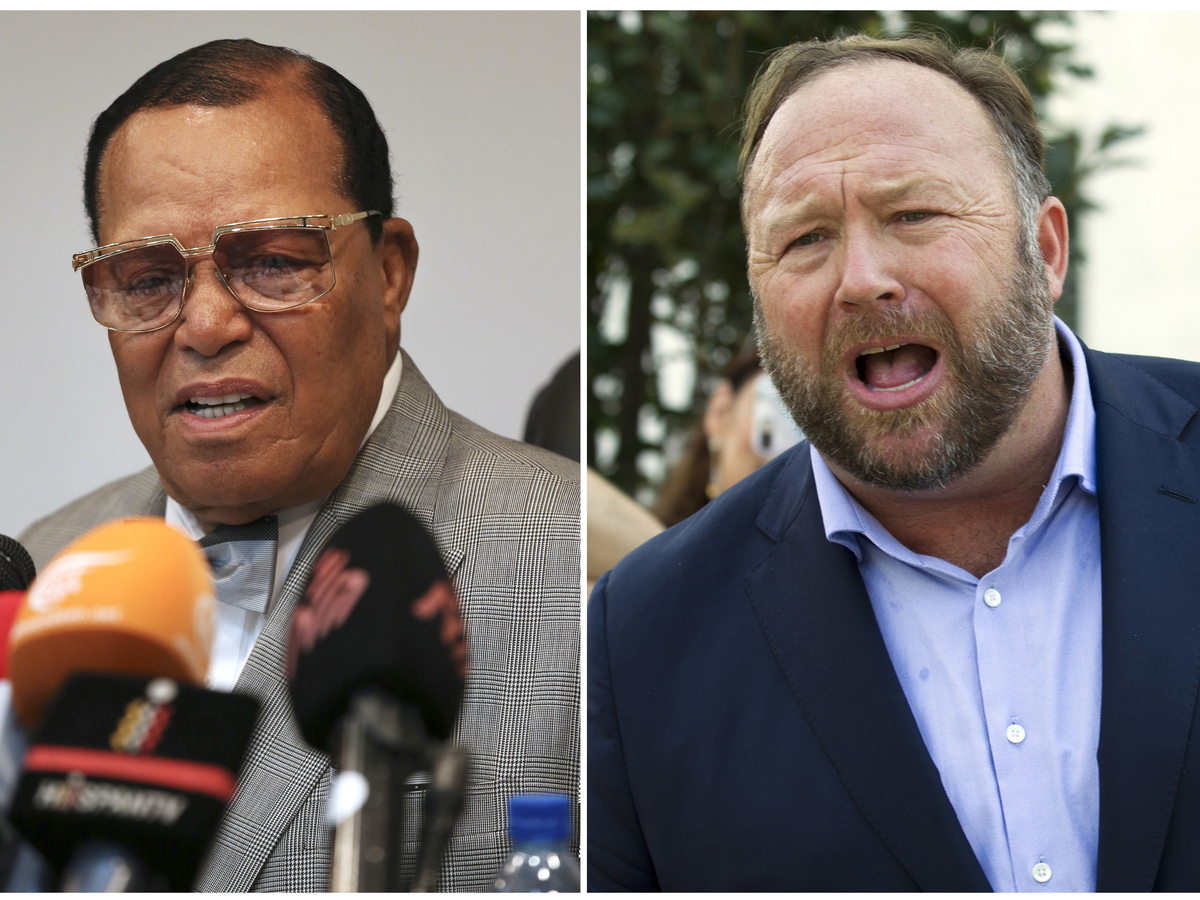 This combination of 2018 file photos shows minister Louis Farrakhan, the leader of the Nation of Islam, and conspiracy theorist Alex Jones. Facebook has banned their accounts for violating its rules against hate speech.

Right-wing conspiracy theorist Alex Jones and Nation of Islam leader Louis Farrakhan are running out of places to espouse their views online.

Facebook banned these high-profile personalities and several others from its social media platforms Thursday, becoming the latest tech company to officially declare them persona non grata. Many of them have already been banned from Twitter, YouTube and Apple's Podcasts app.

In addition to Jones and Farrakhan, Facebook also kicked out right-wing extremists Milo Yiannopoulos, Laura Loomer and Joseph Watson, who works for InfoWars; white supremacist Paul Nehlen, who unsuccessfully ran for Congress in 2016 and 2018; and Jones' company, Infowars. The groups will also lose their accounts on Instagram, which is owned by Facebook.

"We've always banned individuals or organizations that promote or engage in violence and hate, regardless of ideology," Facebook said in a statement, according to The Verge. "The process for evaluating potential violators is extensive and it is what led us to our decision to remove these accounts today."

Facebook bans "dangerous individuals and organizations" that engage in violence or have an ideology that attacks individuals based on race, religion, ethnicity, or sexual orientation. A Facebook spokesperson told CNN that the company undertakes a lengthy review process before a ban, looking at factors such as whether someone has called for violence, and whether they use hateful slurs to describe themselves in their "About" section.

Jones told The Washington Post that Facebook's actions were "authoritarian," saying that they never gave him any direct notice that they found his posts "dangerous."

The social media network has come under pressure for allowing hate to spread online. Its move comes not long after the shootings in Christchurch, New Zealand, in which the killer livestreamed a video that was viewed more than 4,000 times on Facebook before it was taken down.

"The timing is never an accident," Angelo Carusone, president of the liberal organization Media Matters, told the Post. "The reality is, people are getting killed. There are mass shootings and mass murders that are clearly being connected to ideas like white genocide, which are fueling radicalization. The conditions have changed. When you have these massive catalyzing moments that are connected to real-life consequences, it puts pressure on Facebook and others to look in the mirror."

Some free speech advocates have cautioned that Facebook's attempts to police hate speech could lead to unintended consequences. When Facebook announced in March that it was upping its efforts to ban white nationalism from its platform, ACLU staff attorney Vera Eidelman cautioned that "every time Facebook makes the choice to remove content, a single company is exercising an unchecked power to silence individuals and remove them from what has become an indispensable platform."

Eidelman told NPR nothing is stopping Facebook or other platforms from using that same power to censor content on other topics, such as abortion rights or climate change. "For the same reason that the Constitution prevents the government from exercising such power, we should be wary of encouraging its exercise by corporations that are answerable to their private shareholders rather than the broader public interest," she said.

In posts on other platforms, the banned individuals expressed their displeasure at the decision. "Reports are true. I have been banned by Facebook," Watson wrote on Twitter. "In an authoritarian society controlled by a handful of Silicon Valley giants, all dissent must be purged."

Because it took longer than expected for Facebook to purge the accounts, the banned individuals were able to let followers know which other platforms they'd be moving to. Loomer was pessimistic about her chances of being heard in the future. "Looks like you guys will probably never hear from me again. It's only a matter of time before they ban me here too," Loomer wrote on Instagram. "Thank you for all your support. But I guess it's time for me to go to the gulag." She added "#StopTheBias," a hashtag she has embraced to protest what some conservatives perceive as bias on the big social media platforms.

Was given no reason. I broke none of their rules.

In an authoritarian society controlled by a handful of Silicon Valley giants, all dissent must be purged.

Last month, Facebook temporarily banned comments by President Trump's social media director, Dan Scavino, after his postings were flagged by an algorithm. A Facebook spokesperson apologized, explaining that Scavino was banned because he had tagged so many people in his comments that automated bots thought he was a spammer. "I will be looking into this!" Trump tweeted about Scavino's ban, adding: "#StopTheBias."