Accessibility links
U.S.-Mexico Border Detention Facilities Open In Texas The Department of Homeland Security is expanding its detention facilities in response to an influx of migrants from Central America arriving at the southern border. 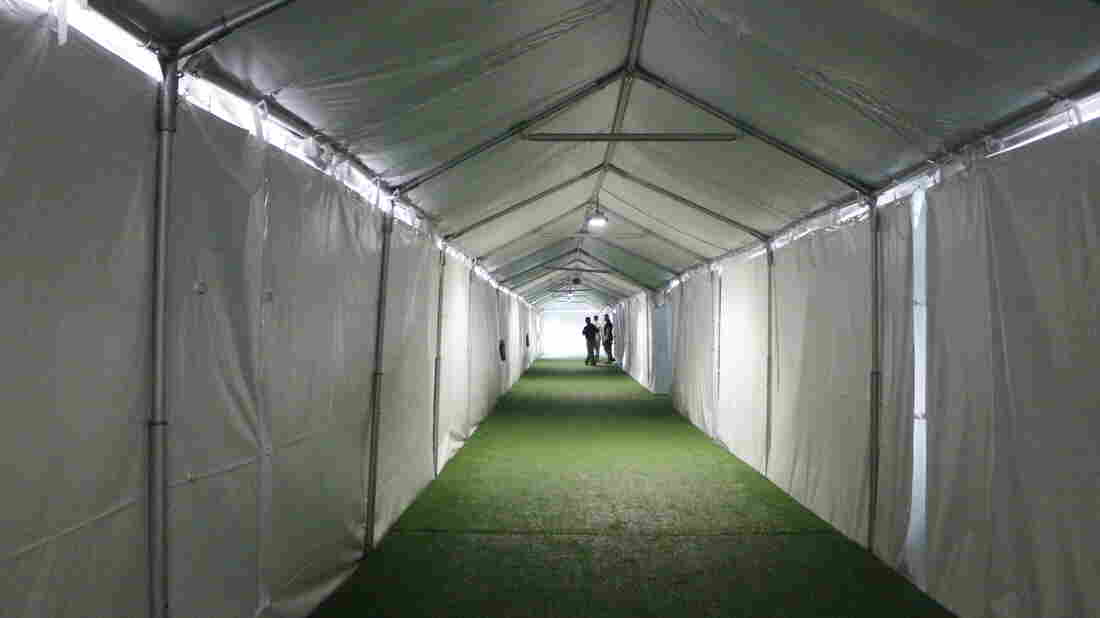 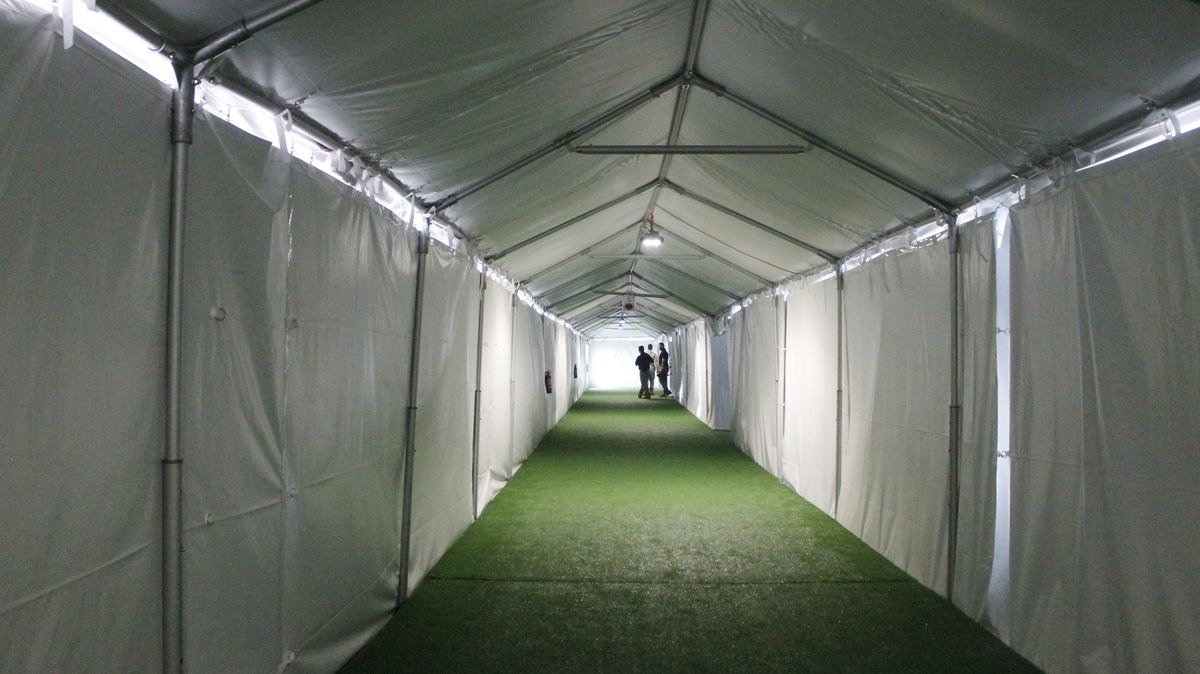 The new tent facility in Donna, Texas, is divided into four color-coded "detention pods." There is a separate intake and processing area.

Giant tent structures have been erected in Texas to serve as short-term detention facilities to process a huge influx of families and unaccompanied minors from Central America arriving at the U.S.-Mexico border.

The facilities are open Friday in El Paso, Texas, and in the state's Rio Grande Valley next to the Donna-Rio Bravo International Bridge.

The white tent structures were built to detain migrants when they are apprehended at the border or turn themselves in to border officials. Migrant families and unaccompanied children are supposed to be detained at the facilities for no longer than 72 hours.

Media gathered inside the 40,000-square-foot facility in Donna, Texas, for a press briefing and tour Thursday evening.

The structures are part of a $36.9 million contract awarded to Deployed Resources LLC, a New York company chosen to construct them. 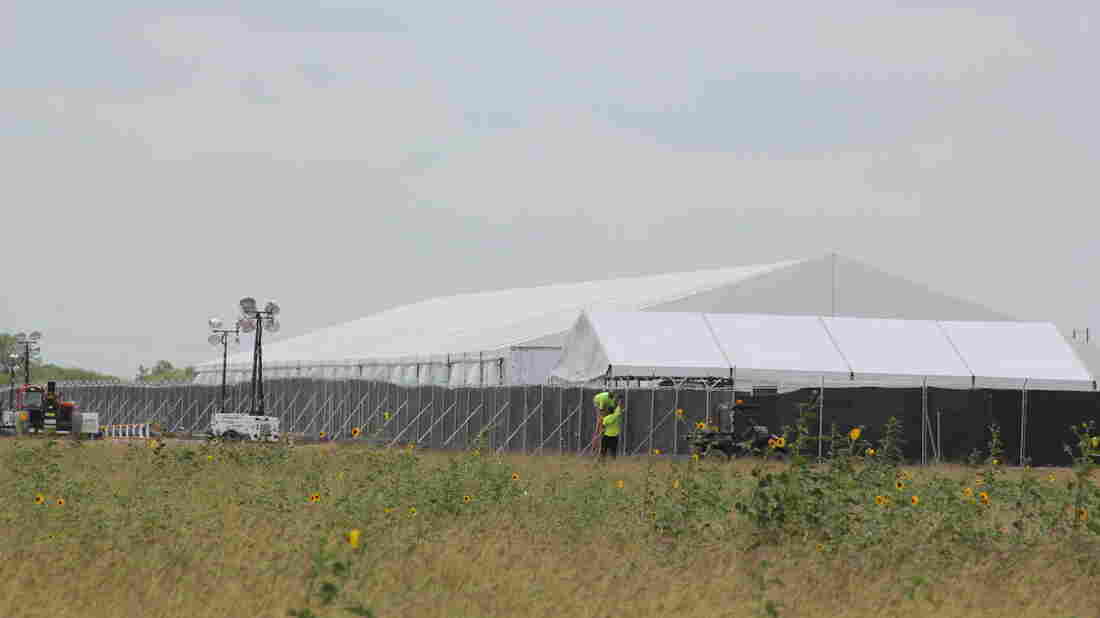 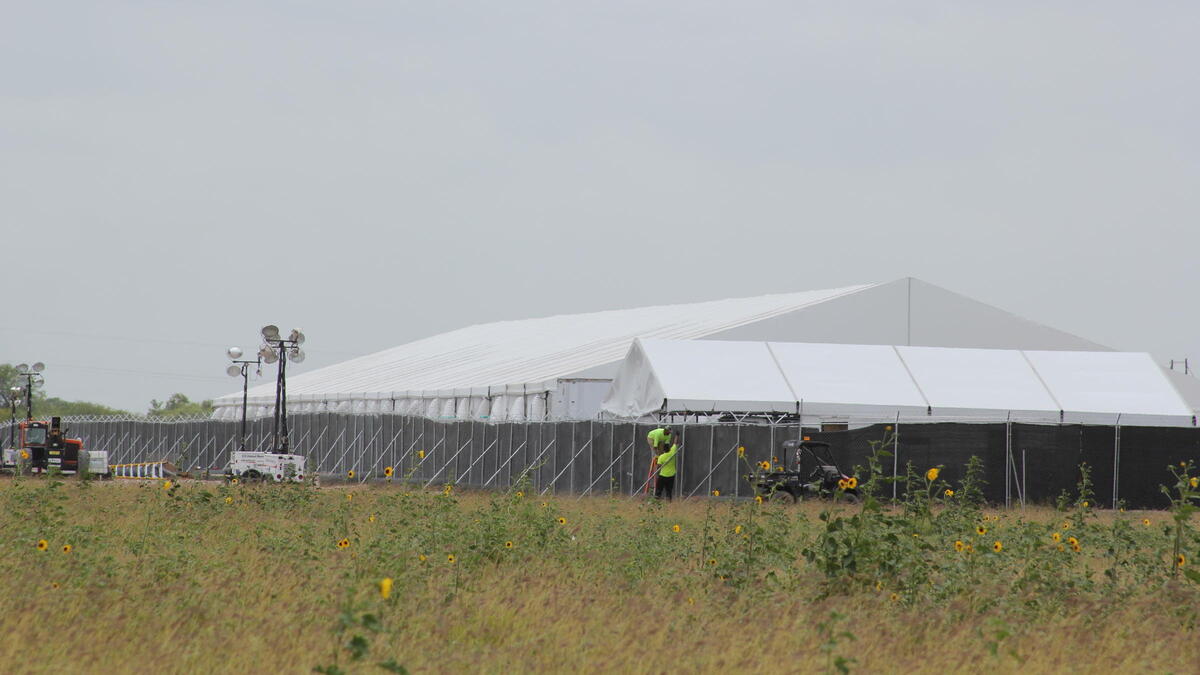 The migrant facility in Donna, Texas, was constructed in 13 days.

The pod had high ceilings with tarplike walls and was nearly empty. Stacks of thin-black-plastic mattresses were pushed against one wall. Qualia said the pods are also color-coded.

At the intake center, there were rows of black benches and border officials behind computers.

A public information officer also showed shower areas — 18 for women and 18 for men.

The facility is meant to hold 500 people but could hold even more if necessary. Qualia said the facility was needed.

"We as small cities are not equipped to handle two-, three-, four-thousand people coming over, and we don't have those kinds of funds," he said.

The new tent structures will be temporary — four months to start with four one-month options. Morales said they need more.

Morales added that it's important to treat the arriving migrants humanely.

"We have to do the right thing. We're America. If we turn these people away and not take care of them properly, where else will they go?" he asked.

Temporary holding facilities aren't new for Donna. In late December 2016, during the final days of the Obama administration, a similar facility opened in the city, but it was operational for only a couple of weeks.

Back then, the detention center raised concerns among residents, immigration advocates and community leaders.

Carlos Moctezuma Garcia, an immigration attorney in the Rio Grande Valley, said in 2016 migrants didn't have access to legal representation at the holding facility, and he's worried that same thing will happen this time.

"This is the first contact they're having with law enforcement officials, and the information that they give here can later be used in whatever court proceeding that these people are going to have," Garcia said.

Garcia was also concerned about oversight and accountability issues that may arise and migrants' access to medical care, which has historically been an issue at detention facilities.

An ACLU report from 2014 found another tent structure in Texas, which was managed by a private prison company, had problems with bug infestations in the sleeping quarters, overcrowding, sewage overflows, extreme temperatures and spoiled food.

In the end, Garcia said he'd like to see border officials find alternatives to detention.

"The majority of these people are presenting themselves to a border patrol official as soon as they see them. Why? Because they want help. They're not looking to evade. So that to me tells me they will continue showing up to immigration court," he said.

The agency said migrants detained in these facilities will be released under 72 hours either to Immigration and Customs Enforcement or, if they are unaccompanied minors, to Health and Human Services for placement in a shelter or with sponsors.

CBP said they don't provide legal services to migrants at the temporary holding facility because the facility is not meant for long-term detention.

The first migrants are arriving Friday at the facility.