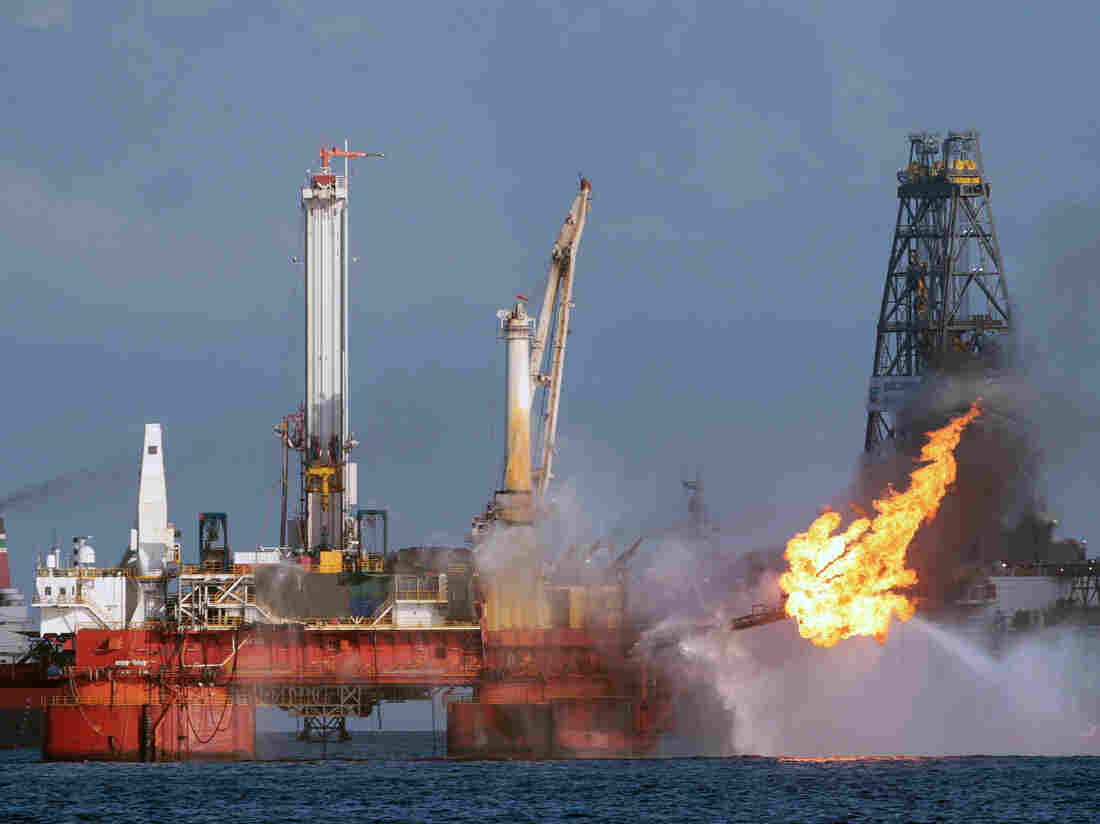 The area of the Deepwater Horizon oil rig is seen here in July 2010, shortly before the Macondo well was capped after spilling oil for 87 days. The Trump administration has proposed revisions to Obama-era rules that aimed to prevent similar disasters. Dave Martin/Associated Press hide caption 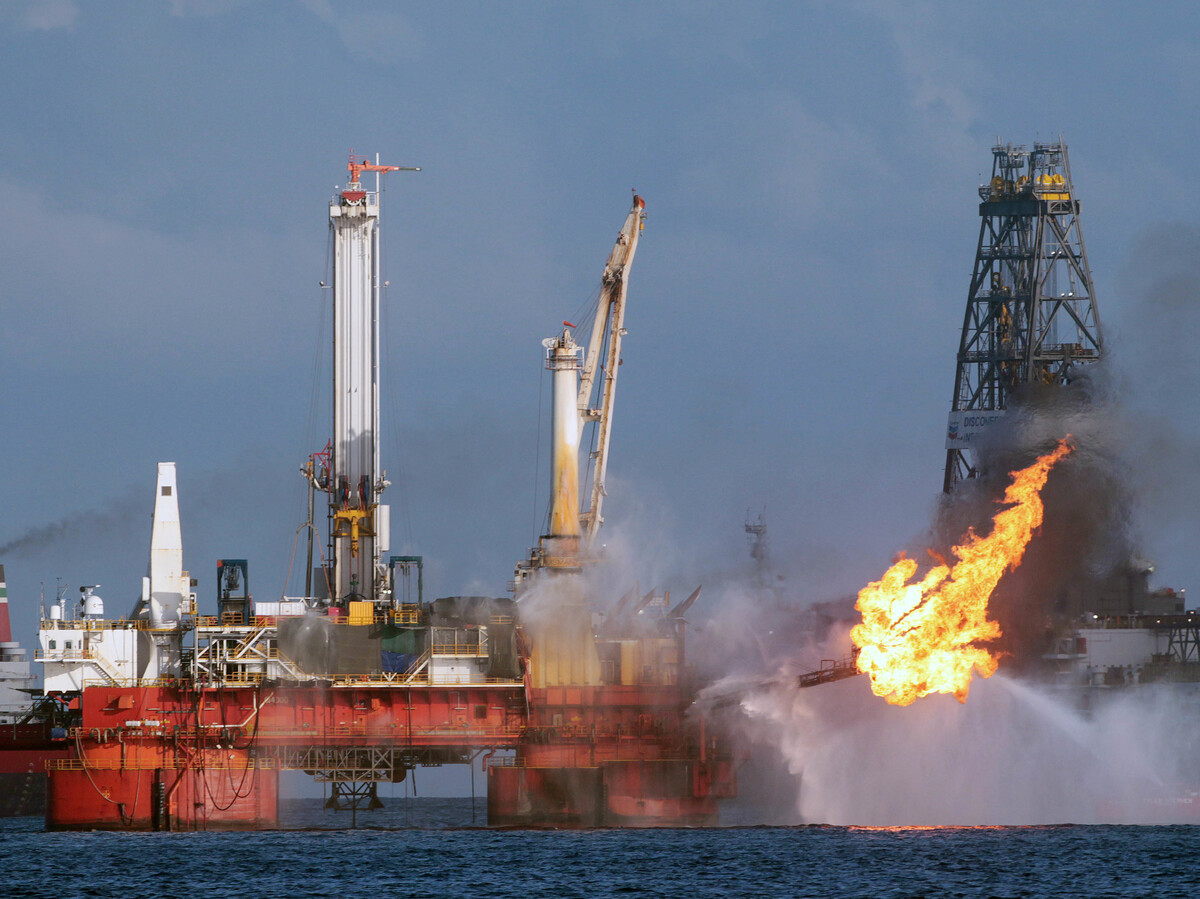 The area of the Deepwater Horizon oil rig is seen here in July 2010, shortly before the Macondo well was capped after spilling oil for 87 days. The Trump administration has proposed revisions to Obama-era rules that aimed to prevent similar disasters.

The Trump Administration is rolling back some of the Obama-era safety regulations for offshore drilling that were meant to prevent a repeat of the 2010 Deepwater Horizon explosion, the worst offshore oil spill in U.S. history.

The change pertains to rules aimed at keeping offshore oil and gas wells from "blowing out" – a sudden and uncontrollable release of crude oil.

In its summary of the rule changes, the Bureau of Safety and Environmental Enforcement says the "revisions modify regulations pertaining to offshore oil and gas drilling, completions, workovers, and decommissioning ... to ensure safety and environmental protection, while correcting errors and reducing certain unnecessary regulatory burdens imposed under the existing regulations."

The rule will be published in the Federal Register next week. The move comes just after the ninth anniversary of the Deepwater disaster, in which 11 workers were killed and 4 million barrels of oil flowed into the Gulf of Mexico over 87 days.

The BSEE was created within the Department of the Interior in 2011, in the wake of the Deepwater disaster. In 2016, the last year of the Obama administration, the BSEE issued new rules governing offshore drilling, including requirements for design of well components as well as monitoring and inspection.

Several of those rules targeted devices called blowout preventers; the failure of such a device contributed to the Deepwater explosion. The oil industry opposed those rules. And now, along with other actions by the Trump administration to ease regulations on oil and gas companies, the BSEE is weakening the federal safety requirements for offshore drilling.

The BSEE is proposing revisions to 59 of the 342 provisions in the 2016 rule, saying that it wants to address safety concerns while also reducing the burden on operators. One revision in the proposed rule reduces the time of a safety test from 30 minutes to 5 minutes. Another limits the number of connection points to a blowout preventer, to reduce potential failure points. Other revisions correct citations in the original rule.

8 Years After Deepwater Horizon Explosion, Is Another Disaster Waiting To Happen?

Interior Secretary David Bernhardt announced the revised rule in Port Fourchon, La., where he touted the changes as a "common sense" approach to safety.

"Incorporating the best available science, best practices and technological innovations of the past decade, the rule eliminates unnecessary regulatory burdens while maintaining safety and environmental protection offshore," he said. "Under President Trump's leadership, America is a leader on energy resulting in greater security and economic prosperity."

The oil and gas industry's trade group and lobbying arm, the American Petroleum Institute, praised the revisions as protecting workers and the environment. "The revision strengthens the rule and enhances a robust regulatory framework to ensure updated, modern, and safe technologies, best practices, and operations," API's Vice President of Upstream and Industry Operations Erik Milito said in a statement.

But environmental advocacy groups are decrying the changes.

Weakening offshore drilling standards would mean it's more likely that another Deepwater-style disaster could occur, according to the Natural Resources Defense Council.

"The well control rule was one of the most important actions we took, as a nation, in response to the BP-style disaster at sea," NRDC spokesman Bob Deans said. "The rule draws directly from lessons learned from that debacle. It creates tools to help reduce the risk of these dangerous industrial operations at sea."

The NRDC and other groups say the proposal goes too far in accommodating the oil and gas industry.

"The Trump administration is putting industry cost savings ahead of safety just weeks after the anniversary of the worst oil spill in U.S. history," Diane Hoskins, campaign director for conservation group Oceana, told Reuters. "We should be implementing new safety reforms, not rolling back the too-few safety measures currently in place."