Accessibility links
Federal Court Throws Out Ohio's Congressional Map The court says the state's map is an "unconstitutional partisan gerrymander" and must be redrawn by the 2020 election. 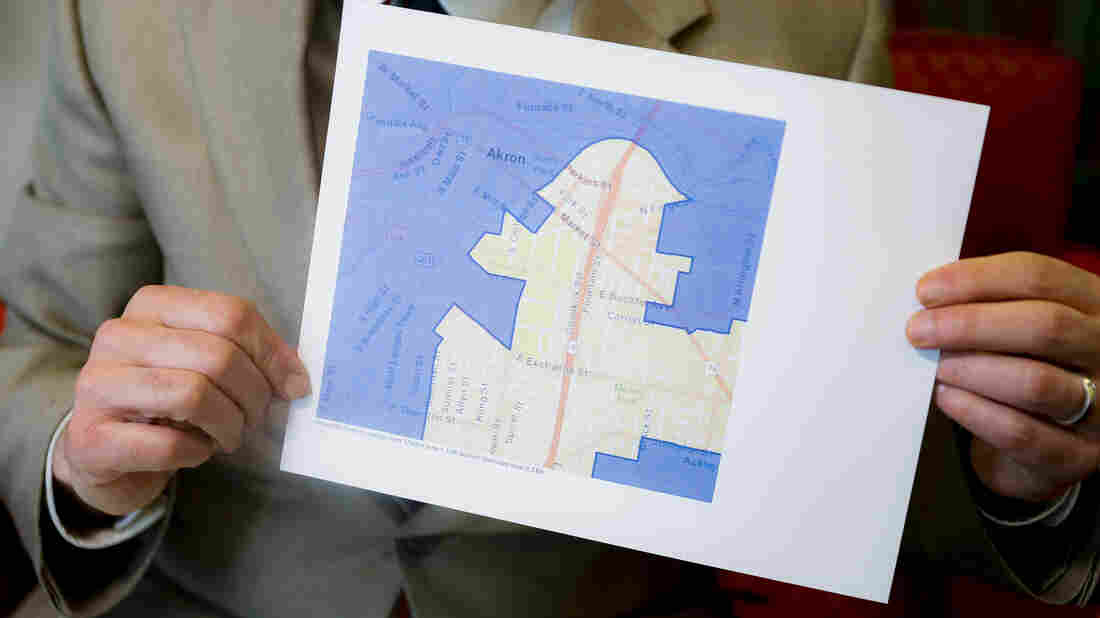 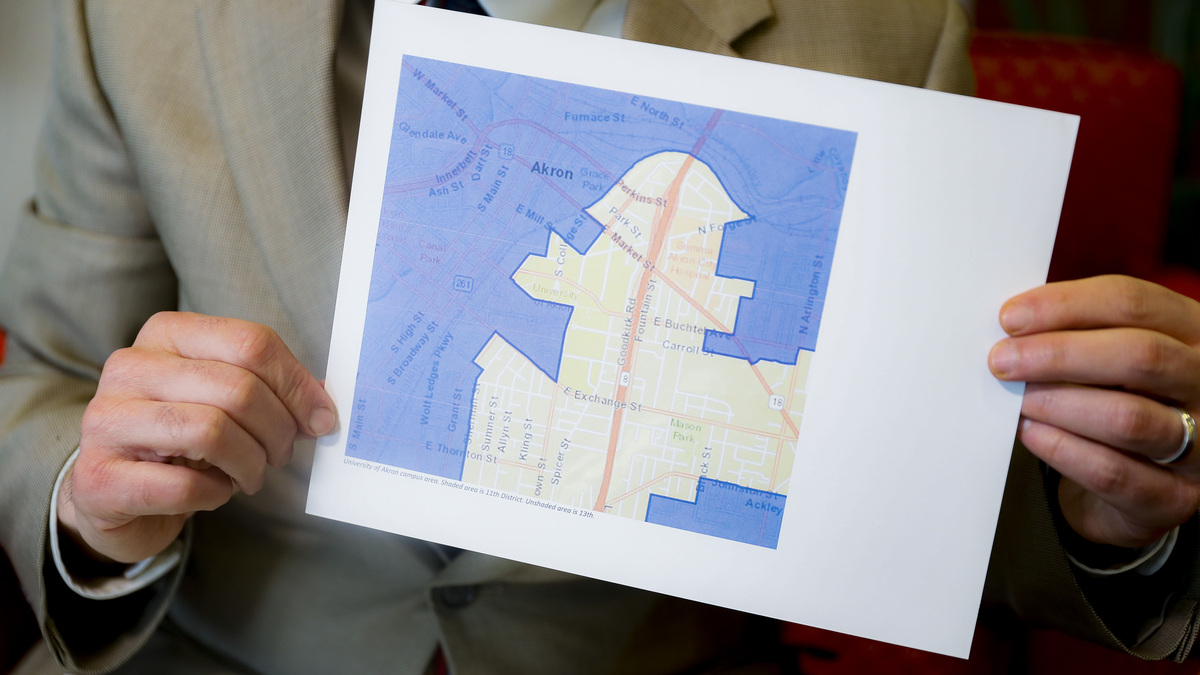 David Niven, a professor of political science at the University of Cincinnati, holds a map depicting a gerrymandered Ohio district.

A federal court has ruled that Ohio's congressional map is an "unconstitutional partisan gerrymander" and must be redrawn by the 2020 election.

In the ruling Friday, a three-judge panel from the U.S. District Court for the Southern District of Ohio argues that the map was intentionally drawn "to disadvantage Democratic voters and entrench Republican representatives in power." The court argues the map violates voters' constitutional right to choose their representatives and exceeds the state's powers under Article I of the Constitution.

"Accordingly, we declare Ohio's 2012 map an unconstitutional partisan gerrymander, enjoin its use in the 2020 election, and order the enactment of a constitutionally viable replacement," the judges wrote in their decision.

The decision is likely to be appealed to the U.S. Supreme Court, which is currently deliberating challenges to congressional maps from Maryland and North Carolina.

The League of Women Voters, ACLU and other voting rights groups sued Ohio last year, saying Republicans redrew the state's congressional map in 2011 with intention of maintaining their 3-to-1 advantage. Since the map came into effect in 2012, Ohio's congressional delegation has been locked in at 12 Republicans and four Democrats.

The judges agreed with voting rights groups in their argument that Ohio's districts were "intended to burden Plaintiffs' constitutional rights, had that effect, and the effect is not explained by other legitimate justifications."

Ohio's current map was drawn in 2011 by Republican state lawmakers, with input from party consultants in a Columbus hotel room. Democrats argue they were shut out of the process completely.

"These national Republicans generated some of the key strategic ideas for the map, maximizing its likely pro-Republican performance, and had the authority to approve changes to the map before their Ohio counterparts implemented them," the judges wrote. "Throughout the process, the Ohio and national map drawers made decisions based on their likely partisan effects."

The judges also ruled that Ohio's map has proven to advantage Republicans in every election. The decision says experts "demonstrated that levels of voter support for Democrats can and have changed, but the map's partisan output remains stubbornly undisturbed."

A ballot issue overwhelmingly passed in May 2018 to place new requirements on Ohio's map-drawing process, but the new map wouldn't be created until after the 2020 census. No congressional election would be affected until 2022.

Under the amendment, a congressional map that lasts 10 years must win 50 percent support from the state's minority party. If it fails to do so, the map would be drawn instead by a bipartisan commission. If that map doesn't get enough support, a 10-year map could then pass with just one-third of the minority party's support, or a four-year map could be passed without minority support but with stricter rules.

The ruling against Ohio comes just over one week after a federal court in Michigan struck down that map as unconstitutional. The judges said Republicans drew the map to unfairly disadvantage Democrats and that the state must redraw its district lines by Aug. 1.

You can view the complete ruling below or at this link.