Accessibility links
NPR Review: 'A Prince On Paper,' By Alyssa Cole This third volume in Alyssa Cole's Reluctant Royals series of romances features a shy but determined heroine and a prince who wants people to think he's a playboy — and all their emotional baggage. 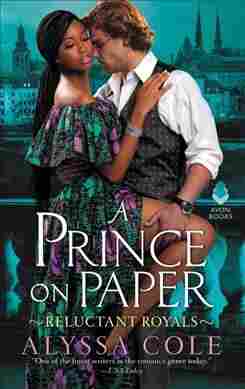 A Prince on Paper

Alyssa Cole's A Prince on Paper, the third novel in her Reluctant Royals series, is brimming with emotion, humor, and sensuality. It's a sweet, engaging story, the kind of thing that might happen in a mythical place like Camelot or Florin, all wrapped up in a contemporary romance — though in this case, our fictional countries are called Thesolo and Liechtienbourg.

Don't worry if you haven't yet read all the novels and novellas in the series. Cole deftly pulls the reader into A Prince on Paper with an opening that offers one of the cutest meet-cutes in romance.

But after that meet-cute, it's a rough road to love for Nya Jerami and Johan von Braustein, with the risk of a broken heart at every turn. Traveling alongside them is a string of tabloid reporters and bloggers with the scent of royal blood in their noses. And that's not all — there's also Nya's incarcerated father, who's still trying to manipulate her, even from behind bars. And Johan's teenaged stepbrother, the heir to the throne of Liechtienbourg, is very angry at his big brother (whom he calls Jo-Jo).

But for Johan and Nya, the epitome of reluctant lovers, the biggest obstacle to falling in love is ... Johan and Nya.

Nya is repressed, sheltered, and inexperienced with life and love. She also carries a barrel-load of self-esteem woes courtesy of her father, who could make a hungry lioness curl into a ball of self-doubt. But Nya does have some steel inside her. She left her home in Thesolo to experience life in New York City and forged some unbreakable friendships. As the story begins, she is returning to Thesolo for her cousin's royal wedding, determined to avoid the pitfalls that have robbed her of her sense of worth.

Johan, on the other hand, is not shy; he brims with confidence and bravado. Or at least, that's the mask he wears. Outwardly, he appears to relish the role of the infamous playboy prince of Liechtienbourg. Called Bad Boy Jo-Jo by the tabloids, his shady reputation is self-made and self-nourished. Of course, he's not all that bad. He chooses to live a lie when in the limelight, seeking the gossip mongers and tabloid headlines; it's how he's protected his heart since his mother's death, years earlier.

These characters are both super self-aware, almost to a fault. Their internal monologue leaves no doubt as to why they can't open their hearts to love, so much so that for a few chapters, I couldn't decide who was hauling the bigger load of emotional baggage — but eventually I gave the prize to Johan. He hides his true nature, the good man Nya believes in, to such an extent that he bristles whenever Nya calls him "nice." And he does this so often it borders on frustrating.

Then, of course, he rebounds with one of his many nice guy moments, (reserved exclusively for Nya), which are SO nice — plus his serious Prince Harry vibe is SO on point — that just like Nya, I couldn't help but forgive him.

While Johan puts up a slick, suave front, Nya is a nerd in the best ways possible. She doesn't whine (too much) about her nonexistent love life or her father's crimes. Instead, she pushes envelopes and boldly tries new things — like dirty-talking to Johan, no matter how nervous or inexperienced she might be (or how hilarious she sounds).

Cole's world-building is almost too believable. I searched for Thesolo, dreaming of a week's vacation, hanging out with friends, old and new, or at least playing 'One True Prince' on my phone for hours.

Furthermore, she's a gamer, addicted to a dating game called One True Prince that sends her fictional texts from cartoon princes she must romance — and whom Johan mistakes for real rivals. The game's title, by the way, is a delightful play on the phrase "one true pairing," or OTP, which came into everyday usage from the world of fan fiction, where I first found it.

Throughout, Cole deftly manages a large supporting cast. Some of the most memorable scenes feature Johan's stepfather King Linus and his brother Lukas, who offer a very contemporary subplot that flows smoothly into the larger love story.

A downside: Cole's world-building is almost too believable. I searched for Thesolo, dreaming of a week's vacation, hanging out with friends, old and new, or at least playing One True Prince on my phone for hours. But alas, like Camelot, I couldn't find a roadmap — or the game — online. And believe me, I looked.

Denny S. Bryce writes historical fiction and urban fantasy. Her first novel, Wild Women and the Blues, is coming in 2021. In addition to NPR, she writes for Washington Independent Review of Books and Frolic. You can follow her on Twitter @dennysbryce