Accessibility links
Texas Legislators Consider Bills That Could Sanction LGBT Discrimination Texas legislators are considering a bill that would allow professionals to deny service to people based on religious beliefs. Critics say the law would sanction discrimination against LGBT Texans. 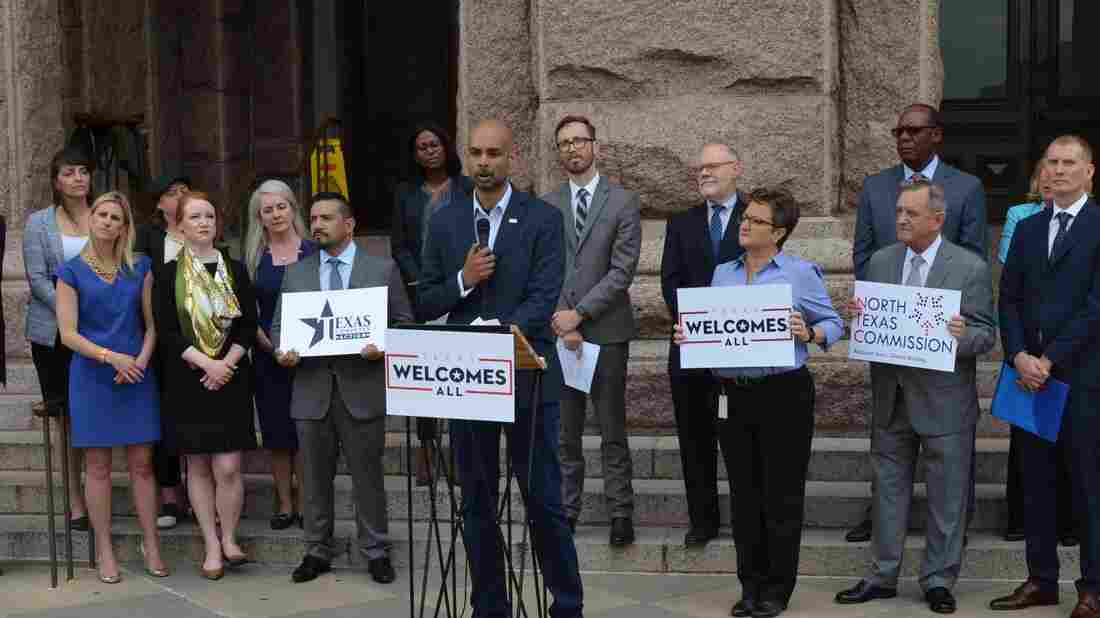 Mike Hollinger of IBM joined a group of business leaders at a news conference on the steps of the capitol in Austin, Texas. The business leaders oppose the so-called religious refusal laws currently under consideration in the Texas legislature. Susan Risdon/Red Media Group hide caption 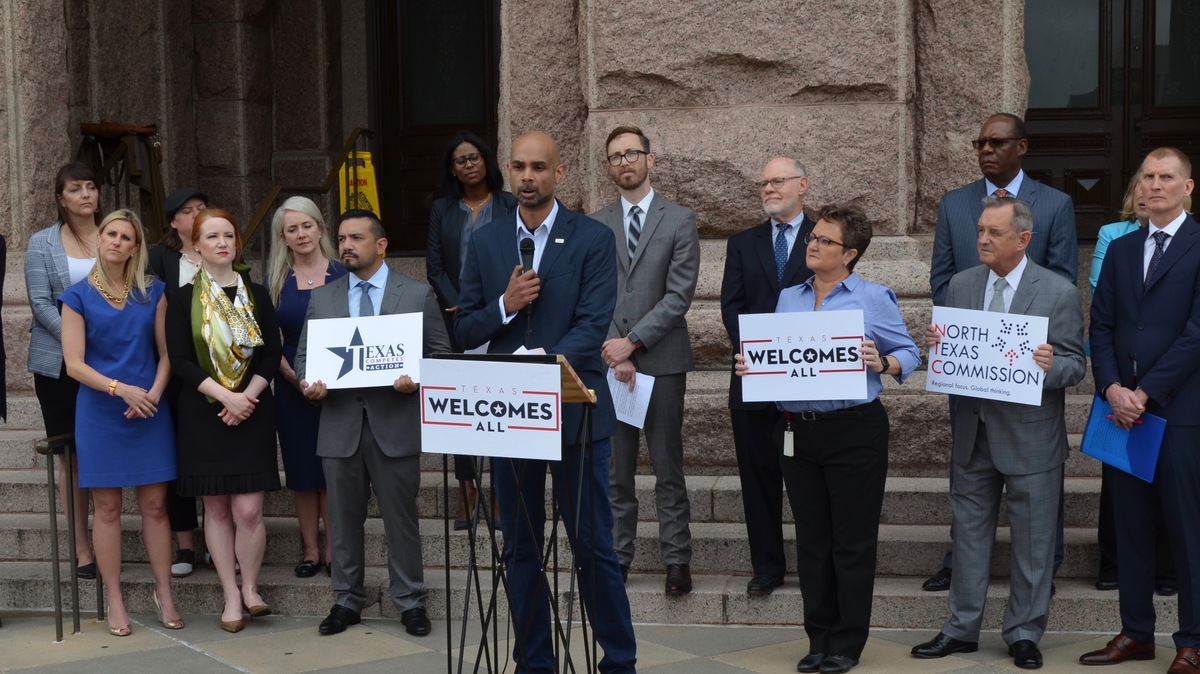 Mike Hollinger of IBM joined a group of business leaders at a news conference on the steps of the capitol in Austin, Texas. The business leaders oppose the so-called religious refusal laws currently under consideration in the Texas legislature.

In Austin, Texas, a new raft of anti-LGBT legislation is working its way through the state legislature. One of the bills would allow state licensed professionals of all stripes — from doctors and pharmacists to plumbers and electricians — to deny services on religious grounds. Supporters say the legislation is needed to protect religious freedoms. But opponents call them "religious refusal bills" or "bigot bills."

Last week, on the steps of the capital in Austin, business leaders gathered to announce their opposition to the series of bills which they say would sanction discrimination against their LGBT employees.

This license to discriminate will damage the state's reputation and prevent people ... from wanting to live and work here.

Mike Hollinger, an executive at IBM, tried to warn the legislature against the legislative efforts. "I'm proud to speak on behalf of IBM, a company with an 80-plus year legacy in Texas and a workforce of around 10,000 here in the Lone Star State. This license to discriminate will damage the state's reputation and prevent people, including IBMers from wanting to live and work here."

A coalition of more than 1,000 Texas and national businesses called Texas Competes are also lobbying against the bills. It includes many of the nation's biggest tech companies including Facebook, Google and Amazon.

One of the bills, Senate Bill 17, specifically allows licensed professionals to discriminate based on sincerely held religious beliefs. Dale Carpenter, a constitutional law professor at the Dedman School of Law at Southern Methodist University, says the bill would allow licensed service providers to discriminate without worrying that their state occupational license might be threatened by their actions.

Carpenter says the list of professionals included is prodigious: "There are literally hundreds of them in Texas ... They include athletic trainers, doctors, nurses, surgeons, dentists, orthodontists, physical therapists, counselors of all kinds, accountants, engineers, landscape architects, real estate agents, tax consultants, air conditioning repair personnel, electricians, on and on and on it goes."

While the legislation might be designed mainly for Texas Christians to withhold their services from LGBT people, Carpenter says it would allow discrimination against anyone as long as the motive is a sincerely held religious belief.

The word "discrimination" gets used by both sides of this political fight.

Supporters of the legislation say this is about safeguarding religious freedoms and ensuring that those who wish to exercise these freedoms aren't discriminated against as a consequence. Jonathan Saenz is the president of Texas Values, a religious liberty organization which is lobbying in favor of passage. He says the legislation has broad support.

"Texans are very concerned about the attacks on religious freedom and people of faith, particularly people that believe in marriage and sexuality as it's defined in the bible," Saenz says. "Senate Bill 17 just makes it clear that you can't force someone to choose between their work and their faith. You can't use the government to punish people that have to get a certain license or authorization just because of some of the personal religious beliefs that they have."

For Republican legislators, this type of legislation puts them in a tough spot. Two years ago a bathroom bill, which singled out transgender public school students and other transgender Texans, tore the Texas GOP in two.

The business community and chambers of commerce hated it. San Antonio was about to host the NCAA Men's Final Four Basketball Tournament and the city was terrified the NCAA would pull out if the bathroom bill became law. It passed the Senate but then Speaker of the House, San Antonio Republican Joe Straus, killed it.

A hero to business but loathed by his party's powerful evangelical wing, Straus retired from politics not long after.

I've got a hundred million dollar's worth of business that's currently at risk, if this legislation were to pass.

The convention and travel industries in particular tend to be the canaries in the coal mine when it comes to these types of bills. Phillip Jones, president and CEO of VisitDallas, says they'd be the first to keel over if the controversial 'religious refusal' legislation passes.

"One in ten trade shows held in America are held in Texas. I've got a hundred million dollar's worth of business that's currently at risk, if this legislation were to pass," says Jones. "Based on our experience with the bathroom bill they have a provision in their contracts that spells out that, should Texas pass any form of discriminatory legislation, then they can cancel their meeting in Texas or in Dallas without any penalties."

Rural communities are most vulnerable if doctors or pharmacists refuse service because alternatives are usually scarce or non-existent. Moreover, opponents of the legislation worry that municipal non-discrimination ordinances in Dallas, Fort Worth, Austin, El Paso and San Antonio could be rendered unenforceable if the bill were to pass.

SMU's Carpenter says that other than the city ordinances, state law provides no safeguards. "It is already perfectly legal to decline service and to do so on a discriminatory basis in the state of Texas," he says. "In fact the law in the state of Texas is that rights of conscience are already protected against state regulation for private citizens and professionals and businesses."

Carpenter says that federal civil rights laws passed in the 1960s provide less protection from discrimination than many might imagine. Race, religion and national origin are protected from discrimination in public accommodations only, such as restaurants, hotels and theaters.

Carpenter believes that, given the already generous legal right to discriminate in Texas, the latest round of bills are merely a way for the Republican-dominated legislature to demonstrate to its evangelical base that they're on the ball.