Accessibility links
Boeing Discovered Problem With Warning Light But Didn't Notify For A Year Engineers at the company discovered a problem with a key safety indicator light within months of the first deliveries of the 737 Max. But it didn't inform airlines or regulators for another year. 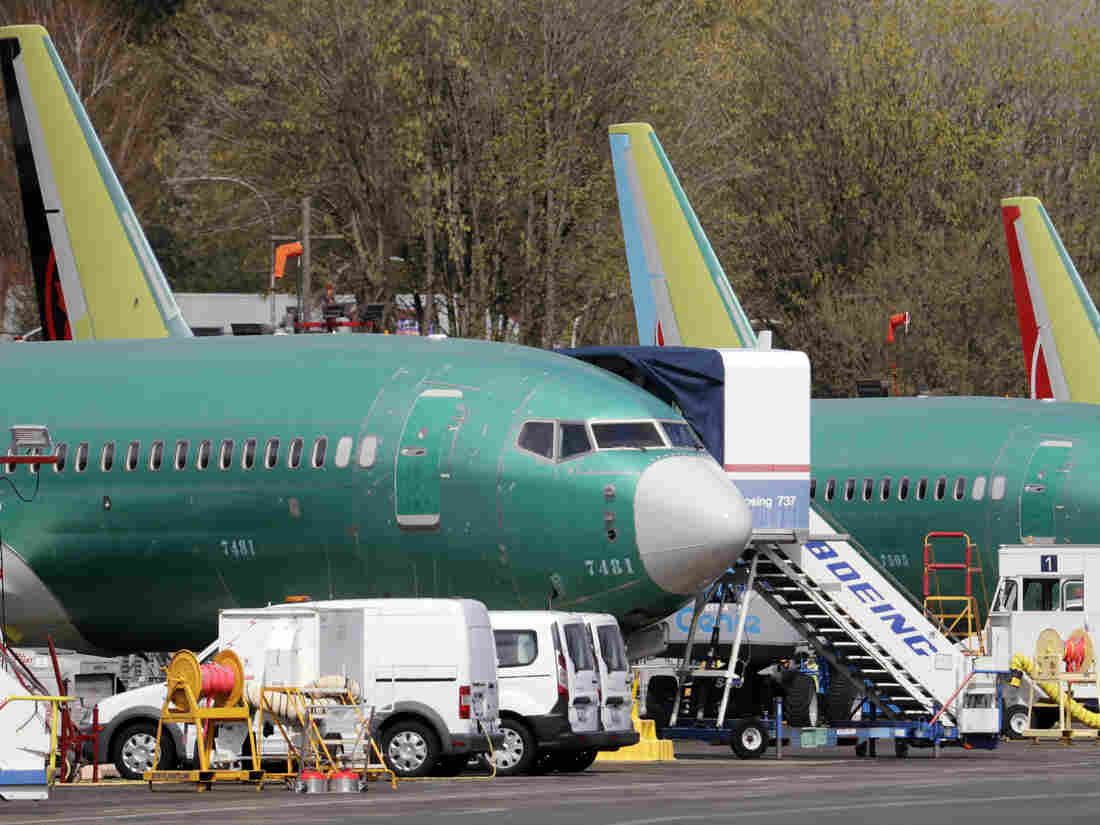 Boeing said on Sunday that it was aware of problems with a key safety indicator in 2017, but it didn't inform airlines or the FAA until after the Lion Air crash a year later. Here, 737 Max jets built for American Airlines (left) and Air Canada are parked at the airport adjacent to a Boeing production facility in Renton, Wash., in April. Elaine Thompson/AP hide caption 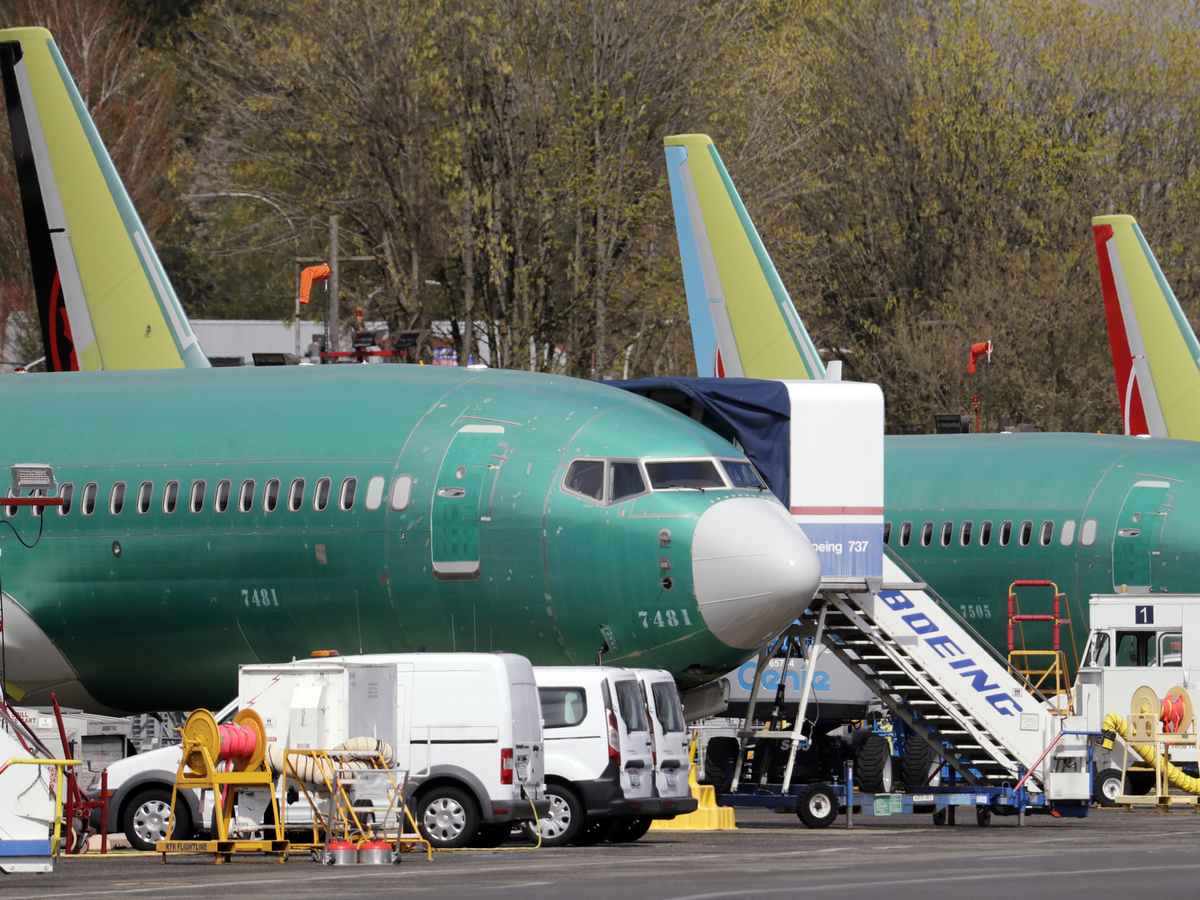 Boeing said on Sunday that it was aware of problems with a key safety indicator in 2017, but it didn't inform airlines or the FAA until after the Lion Air crash a year later. Here, 737 Max jets built for American Airlines (left) and Air Canada are parked at the airport adjacent to a Boeing production facility in Renton, Wash., in April.

Boeing knew that there was a problem with one of the safety features on its 737 Max planes back in 2017 – well before the Lion Air crash in October 2018 and the Ethiopian Airlines crash in March. But it did not disclose the issue to airlines or safety regulators until after the Lion Air plane crashed off the Indonesian coast, killing all 189 aboard.

In a statement Sunday, Boeing said its engineers discovered a problem with a key safety indicator within months of Boeing delivering the first 737 Max planes to airlines. The indicator, called an angle of attack disagree alert, is designed to warn pilots if the plane's sensors are transmitting contradictory data about the direction of the plane's nose.

Boeing intended for the indicator to be standard on the 737 Max, in keeping with the features available on previous generations of 737s. But its engineers discovered that the sensor worked only with a separate, optional safety feature. Boeing said the faulty software was delivered by a vendor, which it didn't name.

When it learned of the issue in 2017, Boeing says it conducted a safety review and concluded that the nonworking alert did not affect airplane safety or operation. The review also concluded that the indicator could be decoupled from the optional indicator at the time of a future software update.

Boeing says its senior leadership wasn't aware of the problem until after the Lion Air crash. Boeing says it discussed the indicator problem at that point with the Federal Aviation Administration — a year after the company knew about the problem. The company then convened another safety review, which concluded once again that the absence of the alert was not a safety issue. It shared the analysis with the FAA.

The FAA said in a statement that its review board "determined the issue to be 'low risk' and would be required to be a part of Boeing's overall enhancement announced after the Lion Air [crash]. However, Boeing's timely or earlier communication with the operators would have helped to reduce or eliminate possible confusion."

A spokesperson for Southwest Airlines, the largest operator of the 737 Max, told The Associated Press that Boeing had informed it of the indicator issue in November, following the Lion Air crash. Southwest then added the optional feature so the angle-of-attack disagree indicator would work.

But only 20% of customers had purchased the optional feature, and neither Lion Air nor Ethiopian Airlines had functioning angle of attack disagree indicators on their 737 Max fleets, The New York Times reports.

"Investigators of the Lion Air plane crash ... say a faulty sensor fed the system erroneous data, and the system forced the nose of the plane down repeatedly. The pilots may not have known the system even existed and engaged in a futile struggle to regain control of the aircraft."

Boeing maintains that the 737 Max was safe to fly even without the alert, which it says provides only "supplemental information." But the new disclosure raises questions about how forthright the company has been about issues with the planes.

"We thought [the disagree light] worked," Jon Weaks, the president of the Southwest Airlines Pilots Association, told the Times. "If they knew it in 2017, why did we get to nearly the end of 2018 until the manual was changed?"

The 737 Max, the fastest-selling plane in Boeing's history, has been grounded around the world for almost eight weeks. The company is working on a software fix it hopes will get the planes flying again this summer, as it faces congressional scrutiny and lawsuits by family members of those who died in the crashes.