Accessibility links
Amid Measles Outbreaks, States Consider Revoking Religious Vaccine Exemptions More than 10 states are considering tightening their vaccine laws in response to what health officials say is the worst year for measles in 25 years. The bills are spurring passionate opposition. 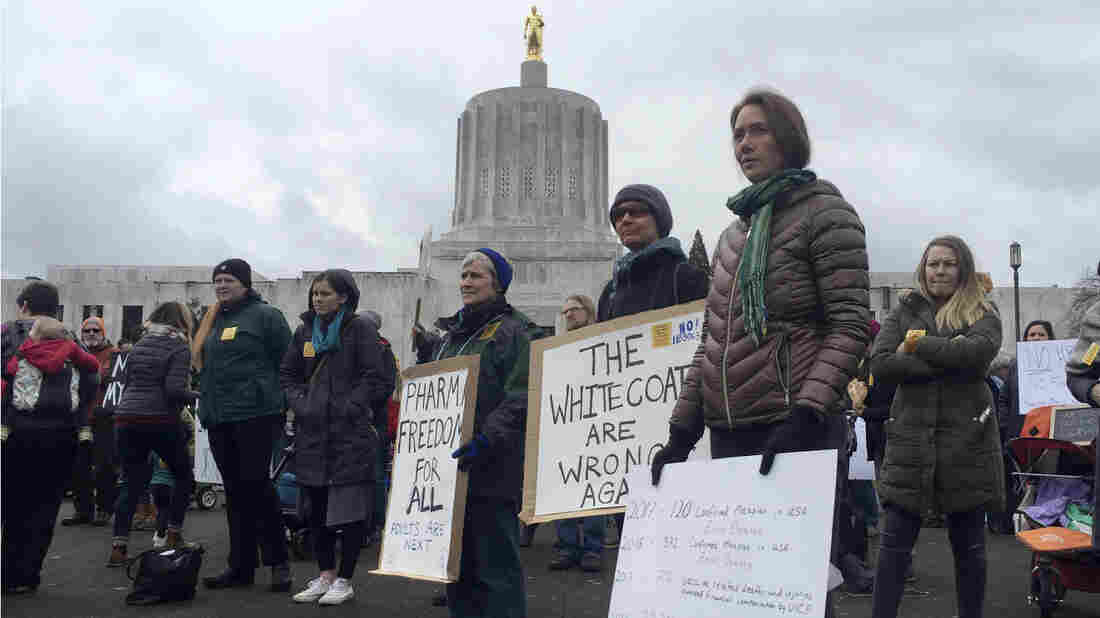 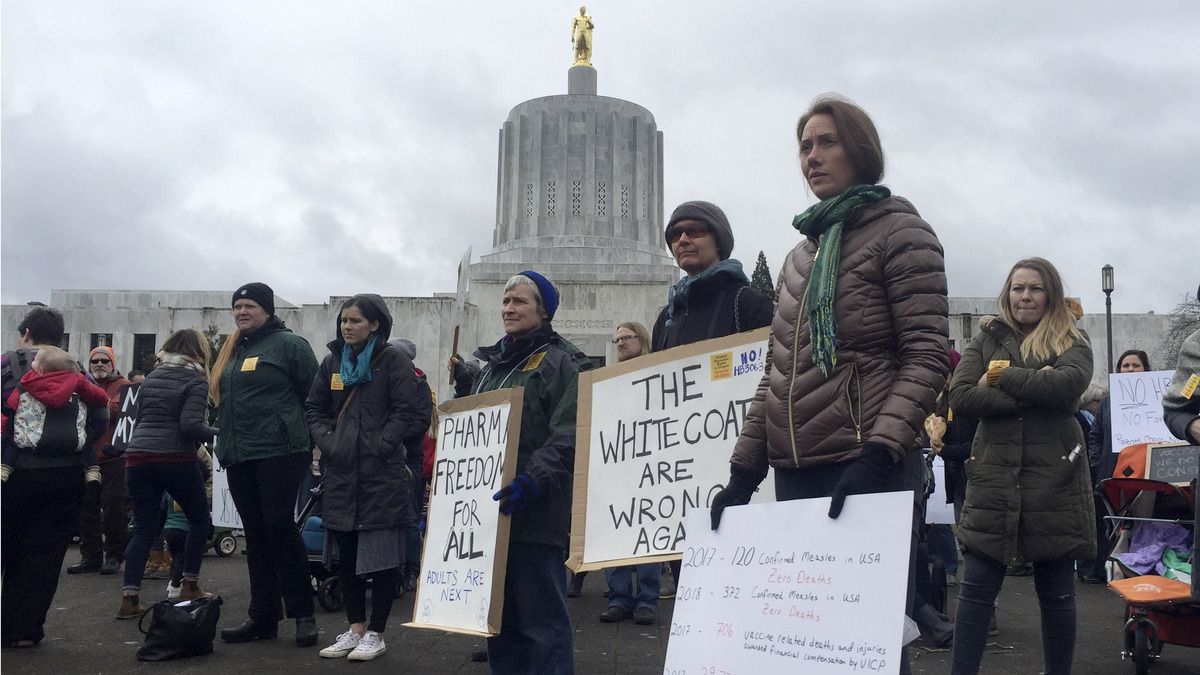 Hundreds of people rally in March at the Oregon State Capitol in Salem, protesting a proposal to tighten school vaccine requirements Similar rallies were held in April.

On a Tuesday afternoon last month — a work and school day — more than 1,000 parents and children made their way to the state Capitol in Salem, Ore., bearing signs reading, "hands off our rights" and chanting "we do not consent!"

Like activists around the country this year, they had been mobilized by what for many is a noncontroversial fact of life: vaccines.

"We are done with the government's recommendations, done with their guidelines, done with their selling our children to the pharmaceutical companies," said Jaclyn Gallian, an activist who spoke at the event. "Who do we turn to when the corruption and capture are happening at the highest levels? What's left except revolution?"

Oregon is one of more than 10 states considering tightening their vaccine laws this year. It's a reaction to what health officials say is the worst year for measles in 25 years — nearly two decades after the disease was labeled "eliminated" in the U.S.

According to the Centers for Disease Control and Prevention, the U.S. has seen more than 700 cases of the highly contagious disease since January. There are ongoing outbreaks in New York and Michigan, among other places.

Earlier this year, the first major outbreak occurred about an hour's drive from the Oregon capital, in southwest Washington. That outbreak has since been declared finished, but it infected more than 70 people before it had run its course.

It also led to the legislation that has caused such a stir in Salem.

Currently, parents in Oregon and most other states can cite religious or philosophical reasons if they don't want to vaccinate their kids. According to the CDC, Oregon kindergartners claim vaccine exemptions at the highest rate in the nation.

But a bill in the state Legislature would do away with those nonmedical exemptions. Parents who didn't secure a doctor's permission would face a choice between vaccination or not sending their kids to school.

This issue has been one of the most emotional issues that I've seen in all my years on the Legislature.

If passed, Oregon would become the fourth state to eliminate nonmedical exemptions. Opponents are keen on preventing that. In the two months since the bill was filed, it has spurred thousands of letters and phone calls, and hours of passionate testimony.

"This issue has been one of the most emotional issues that I've seen in all my years on the Legislature," said state Sen. Lee Beyer, who has served as a lawmaker for nearly two decades.

Similar debates are being held all over the country.

States such as Colorado, Maine and New York have considered bills this year to tighten vaccine laws, with varying outcomes. Colorado's effort reportedly stalled when it failed to pass the state's Senate, while Maine recently pared back a bill that would have eliminated all nonmedical exemptions.

Washington lawmakers have focused on strengthening requirements for the vaccine against measles, mumps and rubella, leaving rules for other shots untouched.

In Oregon, doctors and other health care professionals have come out overwhelmingly in favor of the vaccine bill, which is among the broadest proposed nationwide. They point out that vaccines have been proved safe for the vast majority of the population and effective at stopping the spread of disease.

"Vaccines are one of the few things I recommend without hesitation," said Alanna Braun, a Portland pediatrician, at one of the bill's lengthy hearings. "I am speaking here today on behalf of my patients."

Opponents are far less trusting. Many are parents who worry that their children could be harmed by vaccines. Though rare, some claim their kids have already been injured by the shots.

They also make an overarching argument: that lawmakers are taking away their medical choice.

Scientology Cruise Ship Heads To Curaçao After St. Lucia Quarantines It For Measles

"I specifically believe that no government should tell me what goes into my child's body," said Nikki Kraus, a mother of five who showed up at the recent rally at the Capitol. "That would be like the president of the United States standing at my dinner table and telling me I have to eat mashed potatoes and gravy and fried chicken."

That would be like the president of the United States standing at my dinner table and telling me I have to eat mashed potatoes and gravy and fried chicken.

Evelyn Wakimoto told lawmakers in a hearing she would even consider swapping parties if the Democrats who dominate Oregon's Legislature pass the law. "This bill has seriously made me consider switching my alliance for the first time in my life," Wakimoto said. "The Democratic view has always been about choice — my body, my choice. Choice in medical care for my child is no different."

Still, it's not only Democrats supporting the legislation. The bill has two Republican sponsors, including freshman Rep. Cheri Helt, who says the health of schoolchildren outweighs liberty concerns.

"We don't have many people in the current generation that have experienced polio or the mumps or rubella or the measles and so this is presenting a new conversation," Helt said. "But we can't leave out what the diseases have done to the society and how many people's lives the vaccines have saved."

Helt wasn't around in 2015, the last time Oregon considered stricter vaccine laws. That year, outspoken opposition killed the bill. This year, the question is whether the growing measles outbreak might be enough to drown it out.