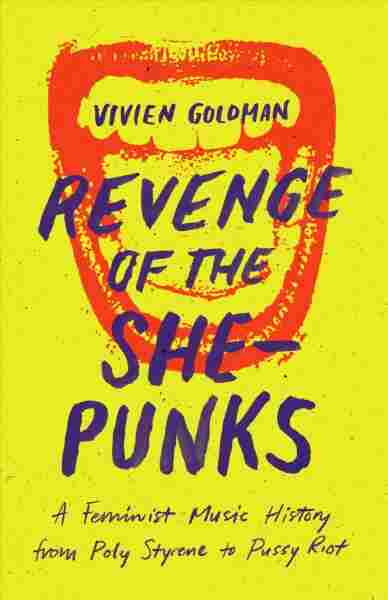 A Feminist Music History from Poly Styrene to Pussy Riot

Punk rock might be a relatively young genre, but the legend of its history has already become more or less solidified.

Ask what makes punk punk and you'll probably get a story that starts in 1970s London, or maybe New York; you'll get The Sex Pistols, The Ramones or The Clash; counterculture, anti-establishment and leather jackets.

Would you hear about bashing the wage gap? Shutting down slut-shaming? Or even Patti Smith? If not, veteran punk (and punk scholar) Vivien Goldman has news for you. In Revenge Of The She-Punks, Goldman sets out to rectify this gendered imbalance, tracing the formation, rise and global reach of punk rock and demonstrating women's central place within it. A self-proclaimed "feminist music history from Poly Styrene to Pussy Riot," the book doesn't just retell the story of punk with an added woman or two; it centers the relationships between gender and the genre, showing how, through the right lens, the story of punk is a story about women's ingenuity and power.

In the manifesto that opens She-Punks — sorry, that's the "Womanifesto" — Goldman places the book's origins in 1976. She was fresh out of college and working as a journalist at the British rock publication Sounds when she saw, for the first time in her life, a woman onstage playing rock music. It led her to publish her first article about women in rock. By the '90s, Goldman says, this type of article had become "a predictable annual staple of rock magazines," fueled by lifeless cliches — but at the time, it was an exhilarating angle and, as this book attests, fertile ground for her lifelong dedication to the topic.

Since writing that 1976 article, Goldman has built a reputation as a punk lifer in every conceivable role: She's worked as a publicist, author, editor and biographer; she's recorded and performed her own music; she's been a producer and a back-up singer. She's taught at NYU's Clive Davis Institute of Recorded Music long enough to earn the title "the punk professor." And throughout her five decades as a punk, she has paid careful attention to female musicians and fans — "she-punks," as she affectionately calls them — from the groundbreaking work of X-Ray Spex and The Slits through contemporary artists like Fea and Big Joanie. Goldman is driven by a true passion for the music's transformative potential: "For this writer," she writes in She-Punks, "punk's most enduring and significant achievement will always be its liberating impact on the less-privileged sex."

She-Punks' chapters are divided not chronologically but by themes, and each section opens with a playlist of the songs Goldman cites throughout the chapter. In "Girly Identity," she explores self-knowledge and self-image within punk, including the impact of '60s and '70s feminist movements and the riot grrrl movement. "Money" focuses on the way she-punks have contended with the pressures of global capitalism. "Love/Unlove" combines songs about love and lust with those about sexual violence, positing the latter category as the former's opposite; it's a vexing choice and might perhaps serve the subject matter better to analyze them separately. Finally, "Protest" considers how she-punks have pushed back against repressive political regimes, gendered expectations, class privilege and more.

Throughout She-Punks, Goldman maintains a global view; while the majority of the book focuses on British and American music, it also includes punk bands from Japan, India, Colombia, Indonesia and the Czech Republic (among others). Goldman has worked extensively on reggae — she was, after all, Bob Marley's first U.K. publicist — and is especially attuned to the impact of Jamaican music on the development of punk. And in keeping with her ethos that our traditional notions of punk can cut important voices out of the story, Goldman's book takes a wide view of what the genre comprises and who deserves to fall under its umbrella, featuring stories about the Afropunk scene, supermodel and new wave queen Grace Jones and poet and activist Jayne Cortez.

Goldman's tone throughout She-Punks mixes her years of research with larger cultural observations and her own personal history (she's thrift shopping with Patti Smith in one chapter; attending Ornette Coleman's birthday party in another). The approach is both disarming and purposeful — supporting the feminist notion that women's lived experiences constitute a valid form of knowledge — yet there are moments when her more casual word choice can be distracting (her claim that punk singer Poly Styrene's biracial identity makes her representative of a "future breed," for example, or her passing reference to homosexuality as a "subculture," are disappointing).

There's a thread of messiness that runs throughout She-Punks: songs that could easily slip from one of the book's chapter-defining themes to another; thoughts on race and LGBTQ identity that deserve to be more thoroughly developed. But attempting to encompass the entirety of this broad view of punk — and the diversity of women's lives — in one volume is an ambitious mission. And for it to succeed, that messiness is inevitable; it only further underscores Goldman's central argument that women's contributions to punk are too important and varied to fit neatly into a clichéd article or two about "women who rock"; that womanhood is too complex and rich to be so easily categorized.

The reality of women's lives, Goldman and her playlists argue, can be brutal, rule-breaking and paradigm-redefining — and, after all, what's more punk than that?