Accessibility links
Charitable Foundations Are Funneling Millions To Anti-Muslim Groups In a new report, called "Hijacked by Hate," the Council on American-Islamic Relations says nearly $125 million was funneled to anti-Muslim hate groups, some from mainstream foundations. 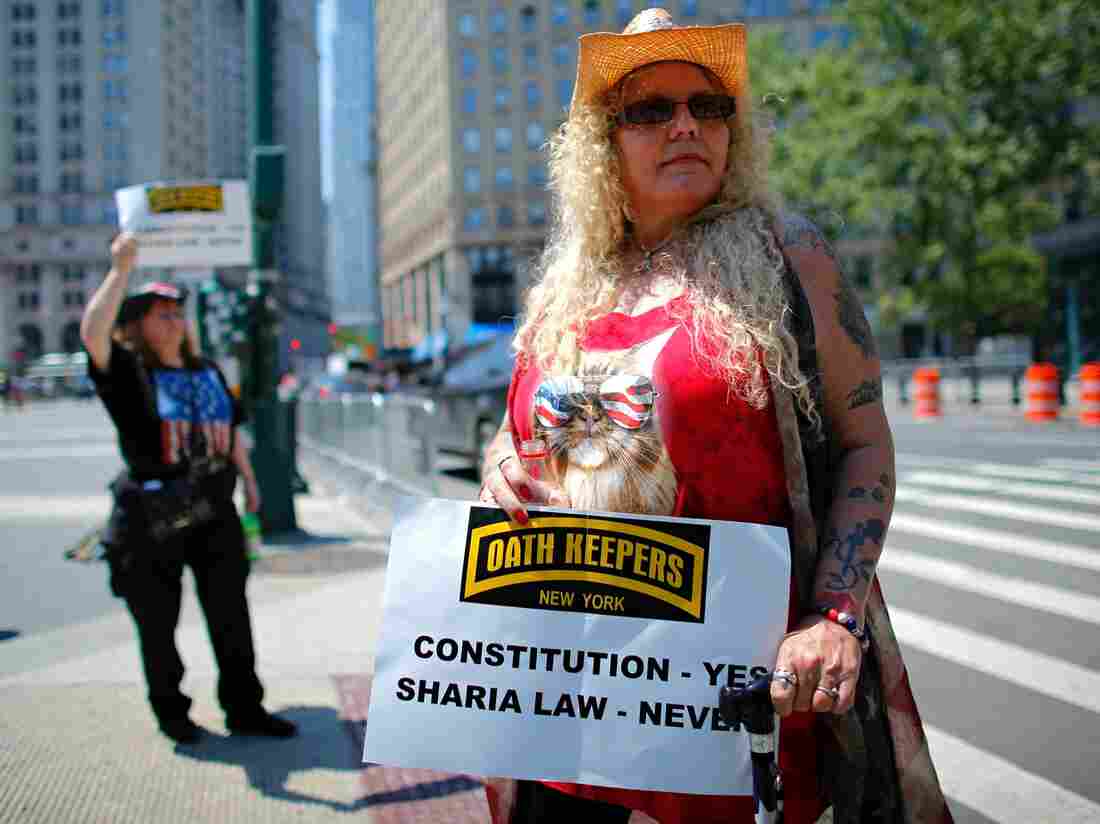 A Trump supporter holds up a sign during an anti-Sharia law rally organized by ACT for America. A new report finds that mainstream philanthropies are unknowingly funneling donations to anti-Muslim groups such as ACT for America. Kena Betancur /AFP/Getty Images hide caption 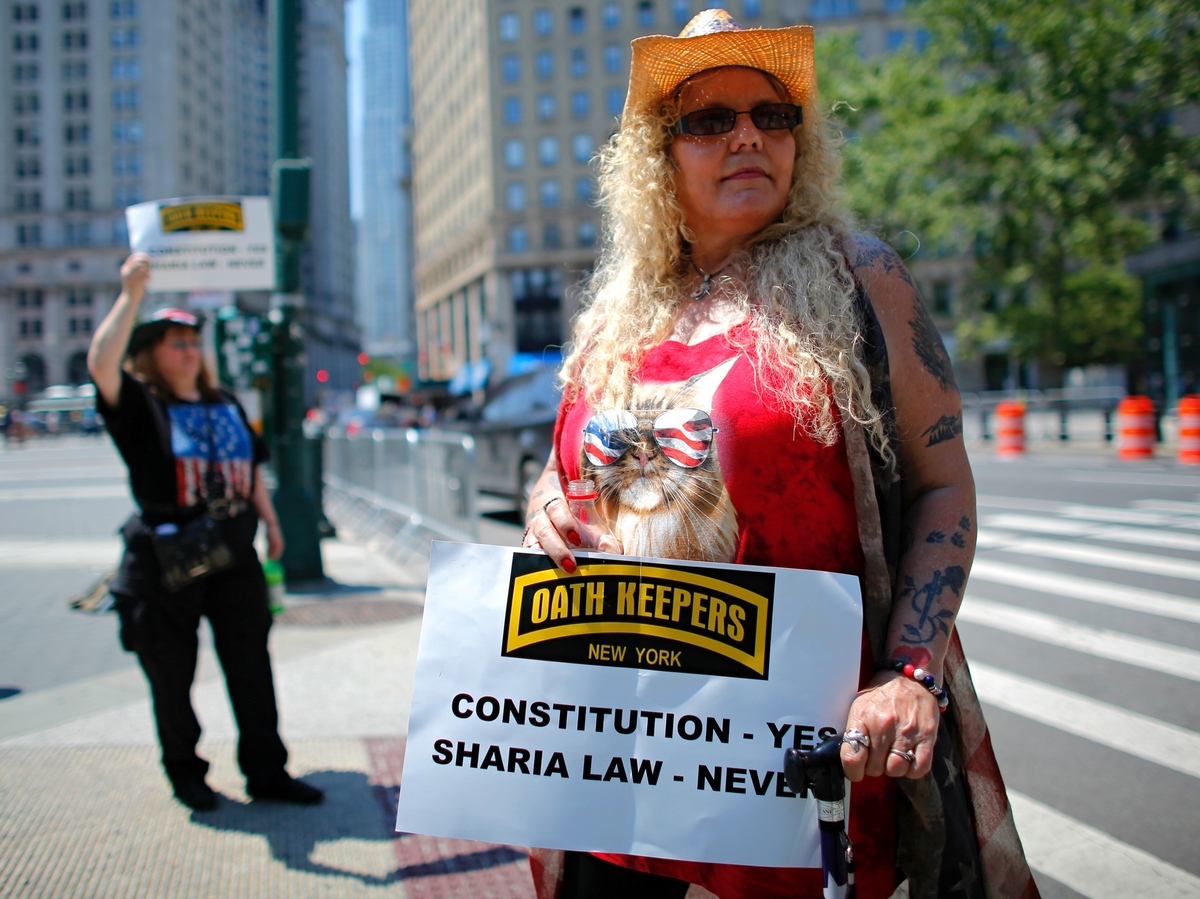 A Trump supporter holds up a sign during an anti-Sharia law rally organized by ACT for America. A new report finds that mainstream philanthropies are unknowingly funneling donations to anti-Muslim groups such as ACT for America.

The Council on American-Islamic Relations looked at the money trail from 2014 to 2016 from over 1,000 largely mainstream charities to 39 anti-Muslim groups that it calls the "Islamophobia Network." The report, called "Hijacked by Hate," was released Monday. It found that nearly $125 million was funneled to these groups. That includes money that was anonymously given through the charitable foundations of wealth management groups like Fidelity Charitable and Schwab.

The hate groups benefiting include ACT for America, the largest anti-Muslim group in the country and a registered nonprofit. The group is described by the Anti-Defamation League as an organization that stokes "irrational fear of Muslims." Others, like CAIR, call it a hate group for its spreading of misinformation about Islam and fearmongering around the principles Muslims live by.

So, he said, a wealthy donor can give to a credible institution like Schwab, through a donor-advised fund. Then that money will be donated to these anti-Muslim organizations, which are registered as nonprofits or social welfare organizations, through the wealth management group. The donor gets a tax deduction and can make the contribution anonymously.

In a statement to NPR, Schwab Charitable said that it is an independent public charity that "facilitates grants on behalf of individuals to [501(c)(3)] charitable organizations of their choice. Grants that are recommended by our clients in no way reflect the values or beliefs of Schwab, Schwab Charitable or its management."

Schwab added that it "does not condone hate groups and we take concerns about illegitimate activity by grant recipients seriously." It encouraged anyone with these concerns to contact the IRS or state charity regulators about the activities of charitable organizations.

The organization's "policies and procedures have always required that grants recommended by its donors are made only to qualified charitable organizations, and that funds are used exclusively in furtherance of charitable purposes. Fidelity Charitable reviews its granting practices regularly and doesn't hesitate to implement changes that it believes ensure better grantmaking to IRS-qualified, 501(c)(3) public charities for exclusively charitable purposes."

But, it added, ultimately it is the responsibility of the IRS to determine which organizations are qualified nonprofits.

In many cases, CAIR's Barzegar said, the same foundations contributing to after-school programs and homeless shelters are also unknowingly, he believes, giving to hate groups. He blames the Trump administration for legitimizing some of these anti-Muslim groups. For example, the head of ACT for America was welcomed at the White House.

"The Trump administration has embraced these institutions and allowed this stuff to become mainstream," Barzegar said. "And we're simply asking the philanthropic sector and the charitable sector people who control hundreds of millions of dollars to take a stand and help us reclaim our public space."

The report links the increased funding of activities of these anti-Muslim groups to real-life negative impacts that range from hate crimes to suicide as a result of intense bullying because of religion.

"Together, the expansive funding network revealed in this report demonstrates that the Islamophobia Network cannot be considered a marginal or passing phenomenon in American society. Rather, it is a prominent and shameful institutional feature of American philanthropy," the report said. "These foundations have donated across a wide range, from the [minuscule] amount of $20 to the staggering sum of $32 million."

The report also tracked money coming from mainstream faith-based charities and private family foundations. It found that the total revenue capacity of the 39 anti-Muslim groups reached $1.5 billion during the 2014-2016 period.

CAIR is calling for more accountability to stop donors from not only giving to these anti-Muslim groups but from getting a tax break for the donation. Arain said she hopes the report will lead to more oversight in the charitable world.

A previous Web version of this story incorrectly referred to Fidelity Charitable as Fidelity.