Accessibility links
Reuters Journalists, Arrested While Reporting On Rohingya, Are freed "I'm really happy and excited to see my family and my colleagues," Wa Lone told reporters as he left the prison after more than 500 days. "And I can't wait to go to my newsroom." 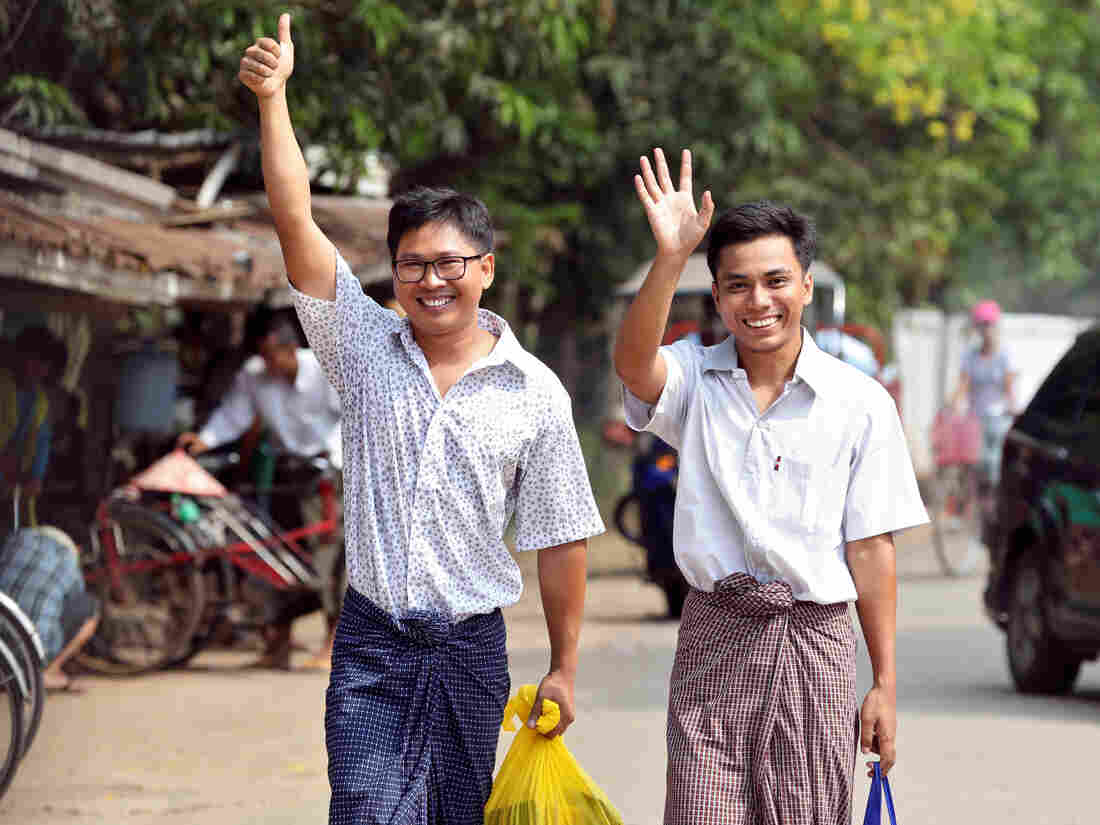 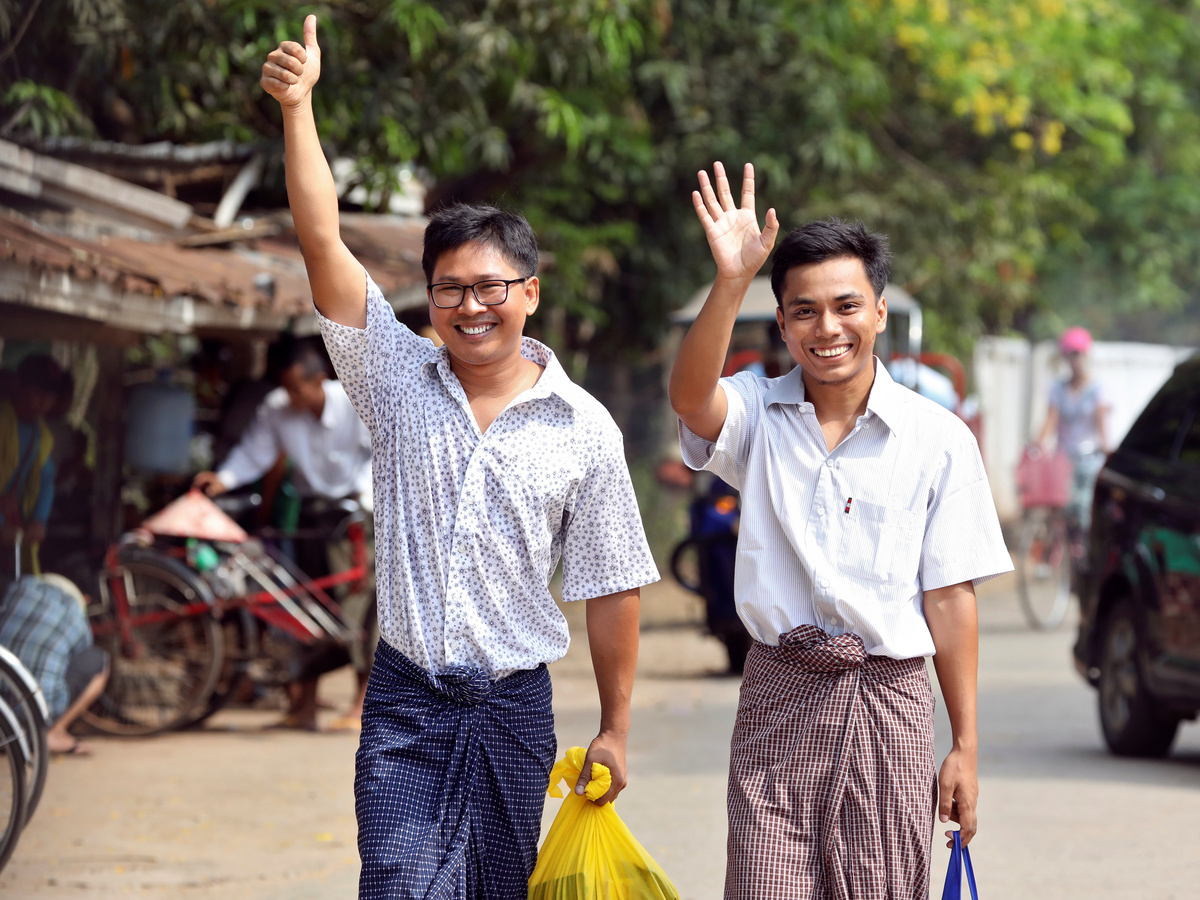 Reuters reporters Wa Lone and Kyaw Soe Oo after being freed from Insein prison, after receiving a presidential pardon in Yangon, Myanmar, on Tuesday.

After more than 500 days in prison, two Reuters journalists convicted of breaking Myanmar's Official Secrets Act have been released from prison.

The two men, Wa Lone, 33, and Kyaw Soe Oo, 29, were pardoned by President Win Myint as part of New Year's amnesty custom in which thousands of people were released from the country's overcrowded prisons.

Throngs of supporters and members of the press greeted the men as they walked out the gates of Insein prison near the city of Yangon, smiling broadly.

"I'm really happy and excited to see my family and my colleagues," Wa Lone told reporters as he left the prison. "And I can't wait to go to my newsroom."

The two were arrested in December 2017 outside a restaurant in Yangon. At the time, they had been working on an investigation of a massacre of 10 Rohingya men in Myanmar's Rakhine state. That reporting won a Pulitzer Prize last month.

In court, as Reuters reported, Wa Lone described the night of their arrest, when they were apparently the targets of a setup. A policeman called Wa Lone to meet. The Reuters bureau chief suggested he bring a second reporter along — Kyaw Soe Oo, a new hire visiting from Rakhine. They went with two police officers for a drink and snack at a beer garden, and as they were leaving, one of them handed Wa Lone a newspaper with documents inside. Men in civilian clothes then surrounded them, and one yelled, "These are secret documents!" Wa Lone and Kyaw Soe Oo were handcuffed and thrust into cars.

Reuters has maintained the innocence of the two as it fought for their release.

Wa Lone and Kyaw Soe Oo were sentenced to seven years in prison in September, convicted of breaking a 1923 law that relates to possessing official documents that "might be or is intended to be, directly or indirectly, useful to an enemy." Two weeks ago, the journalists lost their appeal before Myanmar's Supreme Court, exhausting their avenues for legal appeals.

Their wives wrote to the government asking for an appeal, Reuters said, so the men could be reunited with their families. Wa Lone's wife discovered she was pregnant with their first child shortly after his arrest; he saw his daughter rarely while in prison. Kyaw Soe Oo has a 3-year-old daughter with his wife. Both reporters came from provincial backgrounds. 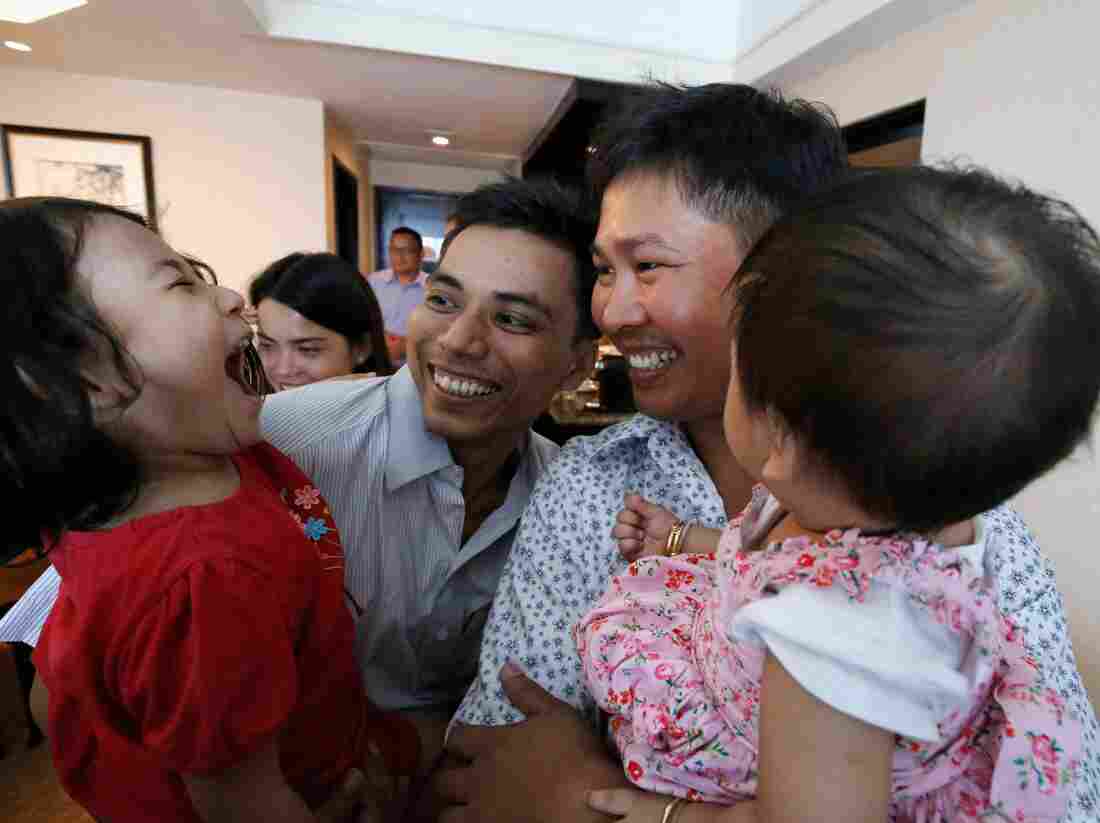 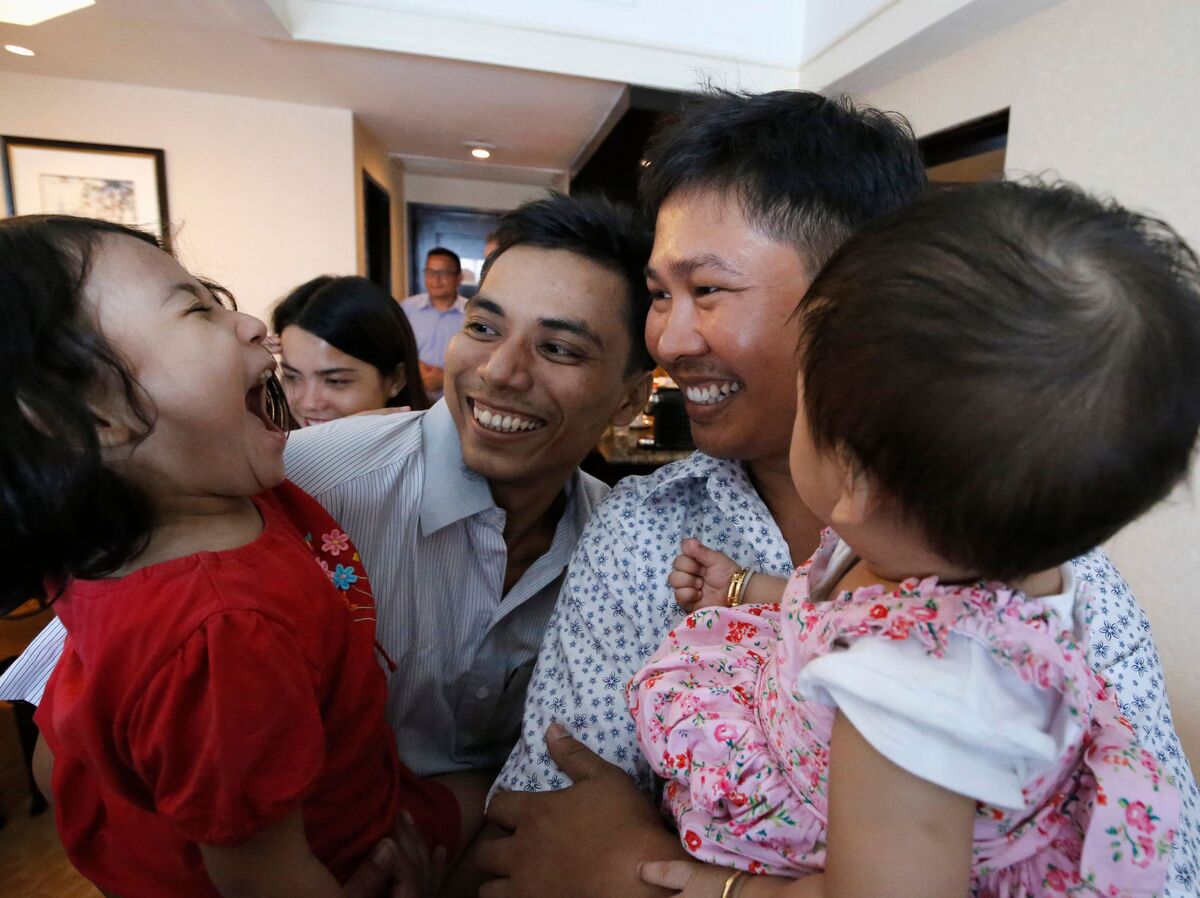 Reuters journalists Kyaw Soe Oo, left, and Wa Lone, right, with their children after being released from prison on Tuesday.

The reporters were released to Lord Ara Darzi, a British surgeon who has served as a member of an advisory board to Myanmar's government as well as a representative of Reuters. He was involved in the pardon discussions and said their release "shows that dialogue works, even in the most difficult of circumstances."

News of the release brought relief to those who had worked to secure their freedom.

"We are enormously pleased that Myanmar has released our courageous reporters, Wa Lone and Kyaw Soe Oo," Reuters Editor-in-Chief Steve Adler said in a statement. "Since their arrests 511 days ago, they have become symbols of the importance of press freedom around the world. We welcome their return."

The United Nations said it welcomed their release and considered it "a step toward improving the freedom of the press and a sign of Government's commitment to Myanmar's transition to democracy. The UN stands ready to continue to support Myanmar in its complex transition process."

Human rights lawyer Amal Clooney served as counsel to the journalists and Reuters. She had high praise for the persistence of their employer.

"It is inspiring to see a news organization so committed to the protection of innocent men and the profession of journalism," Clooney said in a statement. "It has been an honor to represent Reuters and the two journalists in this case, and I hope that their release signals a renewed commitment to press freedom in Myanmar."