Accessibility links
In 'Rough Magic,' A Young Woman Competes In The Mongol Derby The real drama in Lara Prior-Palmer's memoir is the interplay of power and powerlessness; she is at once dominant and entirely at the mercy of the horse, the weather, the landscape and the reader.

In 'Rough Magic,' A Young Woman Competes In The Mongol Derby

In 'Rough Magic,' A Young Woman Competes In The Mongol Derby 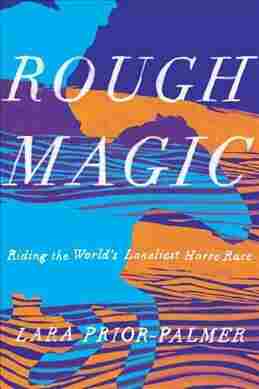 Like many of us, the British writer Lara Prior-Palmer wasn't sure what to do with herself when she turned 18. Unlike nearly everyone else, she decided to fill the next empty months of her life by competing in the Mongol Derby, a 1,000-km wild pony race across Mongolia.

Prior-Palmer had grown up with horses, and had an aunt who had been one of England's best riders. More importantly, she was obstinate, competitive and fanciful in equal measure — "a bundle of urges, a series of plunges." When her application to participate in the Derby was accepted, she became instantly determined to ride, and to succeed.

In her debut memoir, Rough Magic, Prior-Palmer describes her ride in all its pain, boredom, and ultimate glory. "Somehow," she writes at the beginning, "against all the odds, I won a race labeled the longest and toughest in the world — a race I'd entered on a whim — and became the youngest person, and first female, ever to have done so."

It's a good story, but one that, in the hands of a less talented or more self-glorifying writer, could easily have become an unbearable book. It's easy to imagine an endurance-racing memoir filled with nutrition-gel meals and competitive fury, capped by a bit of victorious gloating. It's equally easy to imagine an overly sanitized book, all landscape description and no saddle sores. Thanks to Prior-Palmer's excellent prose and rigorous honesty, Rough Magic is neither. Instead, it's an unusual pleasure to read.

Prior-Palmer never skirts the fact that competing in the Mongol Derby was foolhardy. Nor is she ashamed to admit it was dull. For much of the book, she and her ponies — 25 in all, a new horse every 40 km — drag arduously across a landscape that resists Prior-Palmer's gaze. She considers this the result of a "void in [her] history. Where British culture has not forced its influence, we tread carefully... England was crafted by roads and fields, flooded by a web of happenings with which I was familiar. The steppe would strip all of this away."

And yet her descriptions of the steppe are very beautiful. Prior-Palmer writes with a dash and boldness few writers possess; her language seems sui generis. She's especially gifted with metaphor — when it rains, "there appears a gliding trail behind us, as though the earth is water and we have been fish, until now," and the clouds are "piled high as if lining up for a funeral" — but she remains wary of the "travel writer's habit to compare her surroundings to where she has come from." At once, Prior-Palmer delights in describing the landscape and remembers that her descriptions cannot fully succeed. "There's something about the landscape my mind isn't quite able to re-create," Prior-Palmer writes. The steppe has "an orientation that tears apart my mind map."

Even if Prior-Palmer believes she can't quite conjure the steppe on the page, she vividly conjures herself. She picks apart her cheer on the race, as retroactively puzzled by it as the American TV crews who keep asking, "Why do you always look so happy? Is that your strategy?" For every gorgeous metaphor, there's a pair of wet riding breeches or a toilet that's only "a stinking hole in the ground with wet boards above to stop you from slipping into it." And when she finds herself about to win, in competition only with a bleakly determined Texan named Devan Horn, she simultaneously revels in advancing and tries to understand why, exactly, she cares. She's disliked Horn from the start of the race, and by the end, she's "too incensed by her to reply. Is this half-rude or fully rude? Who's worse, Devan or Lara?"

It's impossible not to side with Lara, and to cheer her on. Her narrative alchemy is remarkable; in every chapter, she turns boredom to suspense and back again. The Derby is at once heart-stoppingly close and a miserable slog to which we already know the ending. That shifting — heroism to comedy, glamour to stinking holes in the ground — creates a tension far more interesting than the question of who's going to win the race, or how. The real drama in Rough Magic is the interplay of power and powerlessness. As a writer and a rider, Prior-Palmer is at once dominant and entirely at the mercy of the horse, the weather, the landscape, and the reader.

This understanding comes from the steppe. By the end of Rough Magic, Prior-Palmer is awed by the land around her. "Living in desertion," she writes, "the land knows what I don't: no one can etch a story into earth or sky. The wind sprints the clouds away, the stage clears for another day." Knowing that, it's no wonder she doubts her own competitive spirit. Yet she keeps competing, even while trying to persuade herself to be more patient, and humbler. Her final hope is not to win the race — though she wants that, too — but to let the race make her free.

Rough Magic seems to stand as proof that she succeeded. And as I read it from the skyless comfort of my couch, I briefly felt a bit freer, too.

Lily Meyer is a freelance writer and translator living in Washington, D.C.