Accessibility links
Sandra Bland's Phone Video Of Her Own Arrest Surfaces, Reviving Calls For New Inquiry "Open up the case, period," Bland's sister, Shante Needham, said after seeing a video that Bland made with her cellphone, recording the traffic stop that put her in jail and led to her death. 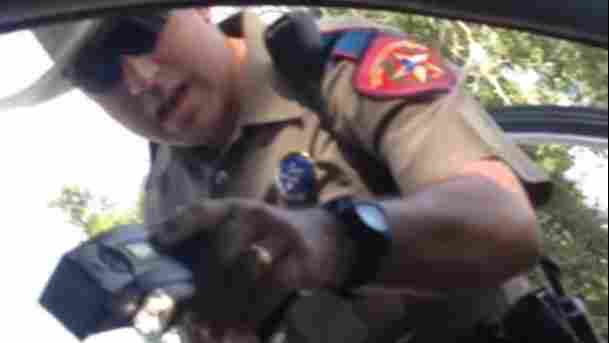 Cellphone footage shot by Sandra Bland and made public Monday night shows her encounter with state Trooper Brian Encinia that led to her arrest in 2015. Days later, Bland was found dead in her jail cell. Investigative Network/Screenshot by NPR hide caption 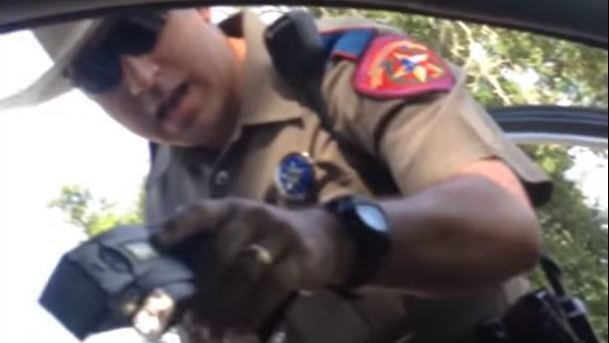 Cellphone footage shot by Sandra Bland and made public Monday night shows her encounter with state Trooper Brian Encinia that led to her arrest in 2015. Days later, Bland was found dead in her jail cell.

Nearly four years after Sandra Bland was pulled over by a Texas state trooper, arrested and put in a jail cell where she was found dead days later, a cellphone video that Bland took of her traffic stop has surfaced.

"Open up the case, period," Bland's sister Shante Needham said after seeing the video, according to TV station WFAA in Dallas. The family's former lawyer says the state never turned over the footage, which Texas officials dispute.

The main record of Bland's controversial arrest had been dashcam footage captured by a state trooper's SUV in Prairie View, Texas. But that changed Monday night with the release of Bland's recording, which was acquired by reporter Brian Collister of the Investigative Network and broadcast on WFAA.

"What this video shows is, it's almost literally through Sandra Bland's eyes," Collister tells member station Houston Public Media, in an interview Tuesday for the Houston Matters show.

The newly released video shows 39 seconds of the roadside encounter that sharply escalated after state Trooper Brian Encinia pulled Bland over for failing to signal a lane change.

In the footage, Encinia is heard ordering Bland out of her car. She asks why — and Encinia responds by drawing his Taser, pointing it directly at Bland and yelling at her, "I will light you up!"

"Wow," Bland says as she gets out and moves around the back of the car with the officer. "You're doing all this for a failure to signal."

Encinia then orders Bland to put down her phone, prompting her to say she has the right to record what is happening. It ends moments later.

The video, which had not been seen publicly, prompted the Bland family's former attorney, Cannon Lambert, to accuse the Texas Department of Public Safety of not divulging the footage's existence during the civil case over her death. In an email to Houston Public Media, the state agency responded by saying the phone video "is not newly discovered and has in no way been concealed by the department."

The statement Tuesday adds that "the video from Ms. Bland's cellphone has been treated as public information and made available upon request."

Bland's death by hanging was ruled a suicide — a finding that her family and their advocates have questioned. Bland's mother and sister have also said that regardless of how her death was classified, the 28-year-old should not have been jailed for three days over a traffic stop.

Bland died in Waller County, northwest of Houston. In late 2016, her family reached a $1.9 million wrongful-death settlement with the county and the Texas Department of Public Safety. But Bland's relatives have also pushed for criminal charges against Encinia, who was fired by the Texas DPS.

The only criminal charge filed in Bland's case was one of perjury against Encinia. He was accused of lying on his official report about what happened during the traffic stop. But prosecutors dropped that charge after he agreed to forfeit his license and not work in law enforcement again.

As Collister sees it, the new video undermines a key assertion by Encinia and his defense lawyer — that he was in fear for his safety.

"He clearly is not acting as though he was in jeopardy," Collister says. "He sees the phone in her hand — in fact, he tells her to put it down."

Street Where Sandra Bland Was Arrested Renamed In Her Honor

The reporter says Darrell Jordan, who was one of the special prosecutors who worked on the criminal inquiry into the case, confirmed that prosecutors had received the cellphone video. But Jordan, who has since become a judge, was not able to say whether a grand jury had seen the footage, citing secrecy rules around grand juries.

Bland's family believes the video was intentionally not made public, Collister says. According to Houston Public Media, the reporter first obtained the video in 2017, but it wasn't used in a story at the time. It was only after Collister realized Bland's family had not seen the recording that he decided to make it public.

Collister says the video should raise questions for state Attorney General Ken Paxton's office, which represented the Department of Public Safety in the federal wrongful-death lawsuit. Collister says he had been seeking information on whether prosecutors from that office complied with a discovery order and turned over the video during the civil suit.

"We have not gotten a word, and we've been trying for a week," he says.