Accessibility links
In Hungary, Most Media Back Government. These Outlets Strive For Independence A handful of news websites are struggling to change the narrative from the dominating, pro-government media conglomerate one analyst calls a "centralized propaganda machine."

Listen · 5:01 5:01
Outlets Strive For Independence In Hungary, Where Most Media Back The Government 5:01 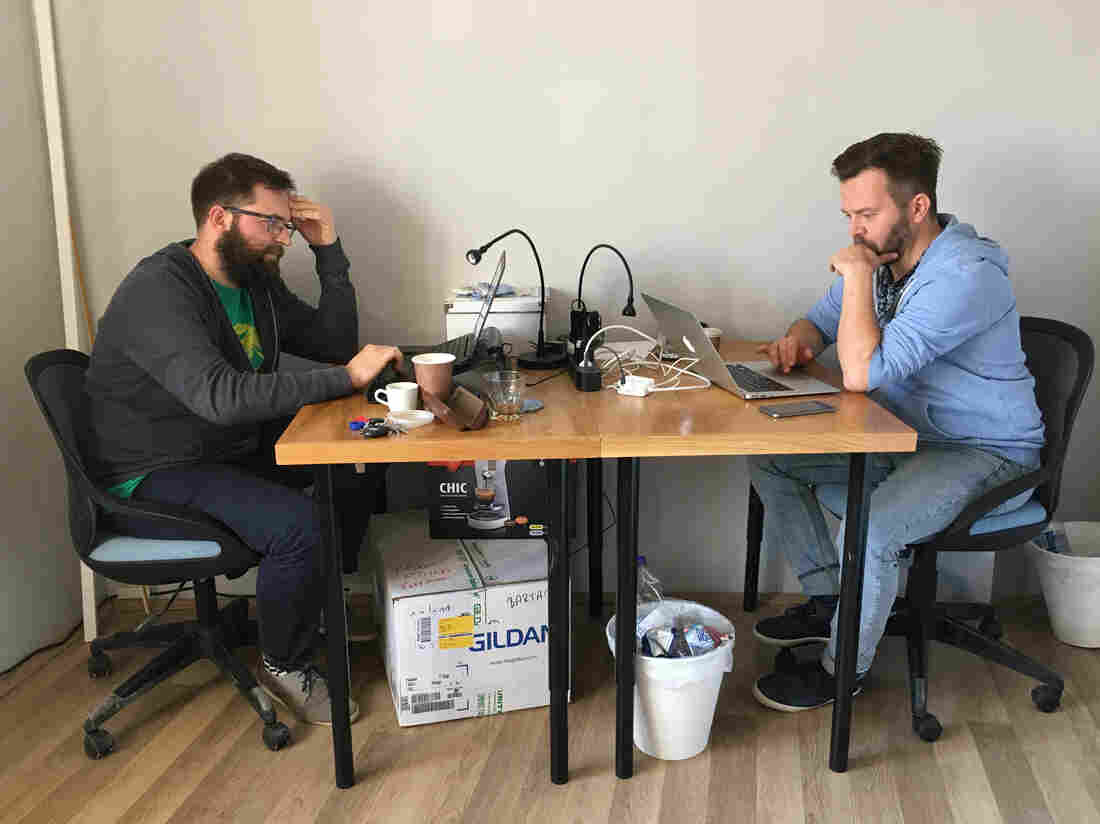 Journalists Ervin Guth (left) and Ferenc Nimmerfroh work out of a small office in downtown Pecs, a city in southern Hungary. They and colleague Attila Babos started the independent news site Szabad Pecs (Free Pecs) after the local newspaper where they worked was purchased by a pro-government media company. Joanna Kakissis/NPR hide caption 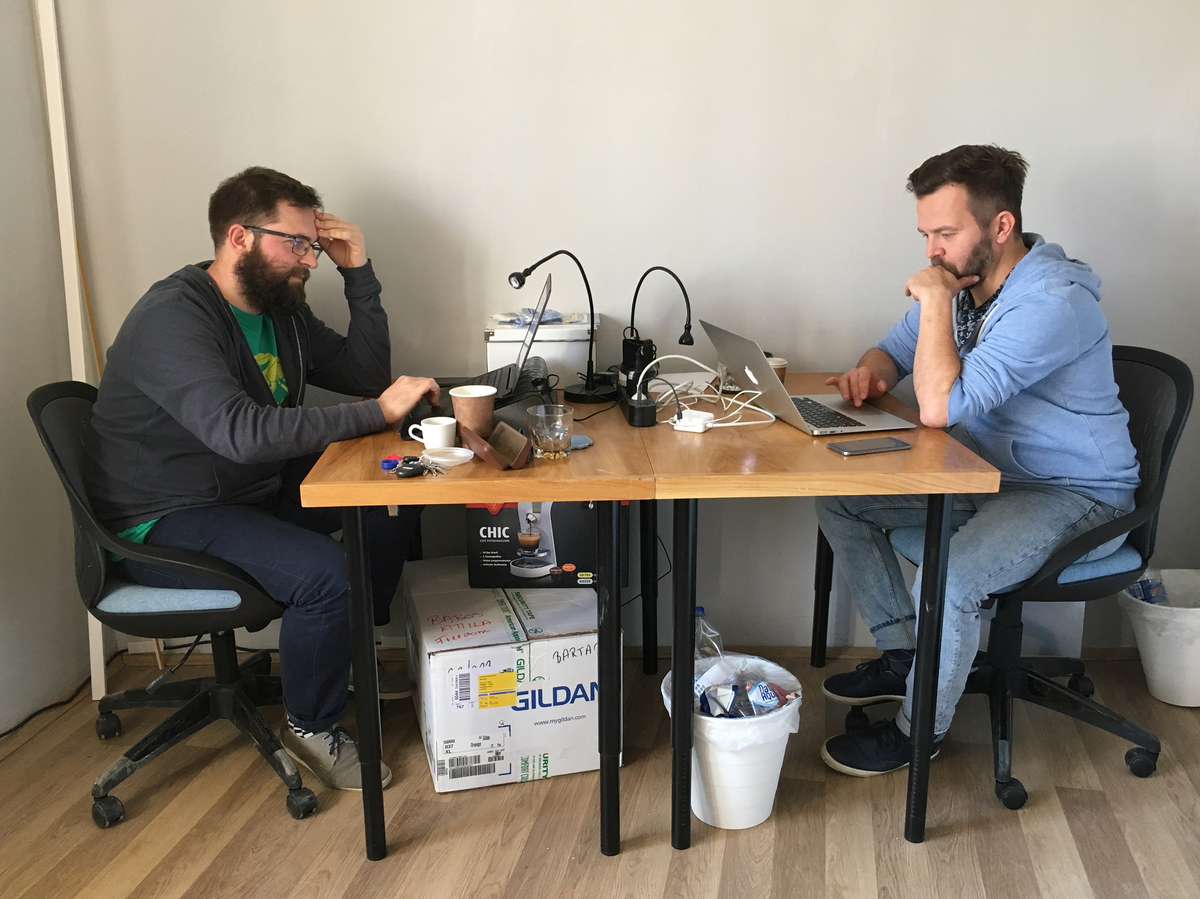 Journalists Ervin Guth (left) and Ferenc Nimmerfroh work out of a small office in downtown Pecs, a city in southern Hungary. They and colleague Attila Babos started the independent news site Szabad Pecs (Free Pecs) after the local newspaper where they worked was purchased by a pro-government media company.

Just three years ago, the daily Dunantuli Naplo was considered a reliable source of news in southern Hungary wine country.

Its name means Trans-Danube Journal. Based in Pecs, a cobblestoned university city that once thrived on coal mining, the newspaper's journalists were known for digging into important local issues and holding politicians accountable.

"We pushed back when politicians tried to interfere in our work," says Ferenc Nimmerfroh, a bearded 45-year-old dad of three, who worked there for more than two decades. "We took really reporting seriously and tried not to take sides.

Then, in 2016, there was a series of ownership changes at Dunantuli Naplo, where Nimmerfroh was the managing editor. The new owners of the publisher Mediaworks attracted key investors considered close to Hungary's nationalist prime minister, Viktor Orban. When Mediaworks has bought shares in news outlets, it has either shut them down or fired editors seen as critical of Orban.

Anticipating the worst, many of Nimmerfroh's colleagues at Dunantuli Naplo quit in protest. He needed the income to support his family. So as Christmas approached, he hung on. 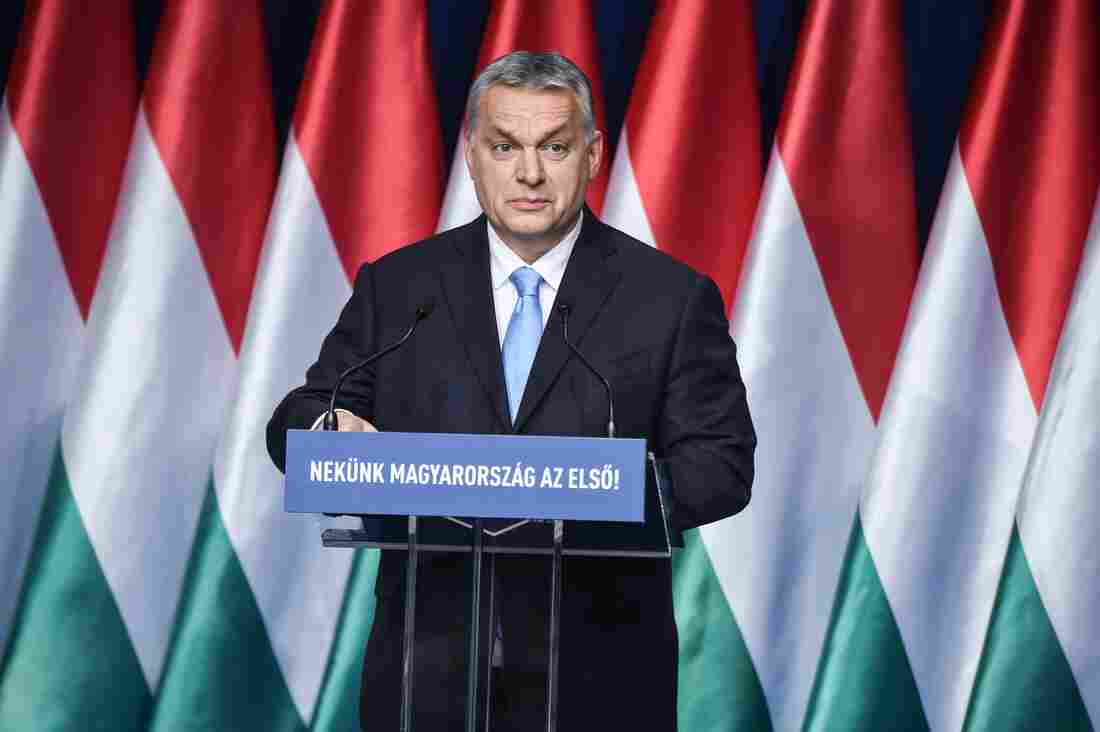 Hungarian Prime Minister Viktor Orban delivers his state of the nation speech in front of his party members and sympathizers at a cultural center in Budapest, Hungary, on Feb. 10. Attila Kisbenedek/AFP/Getty Images hide caption 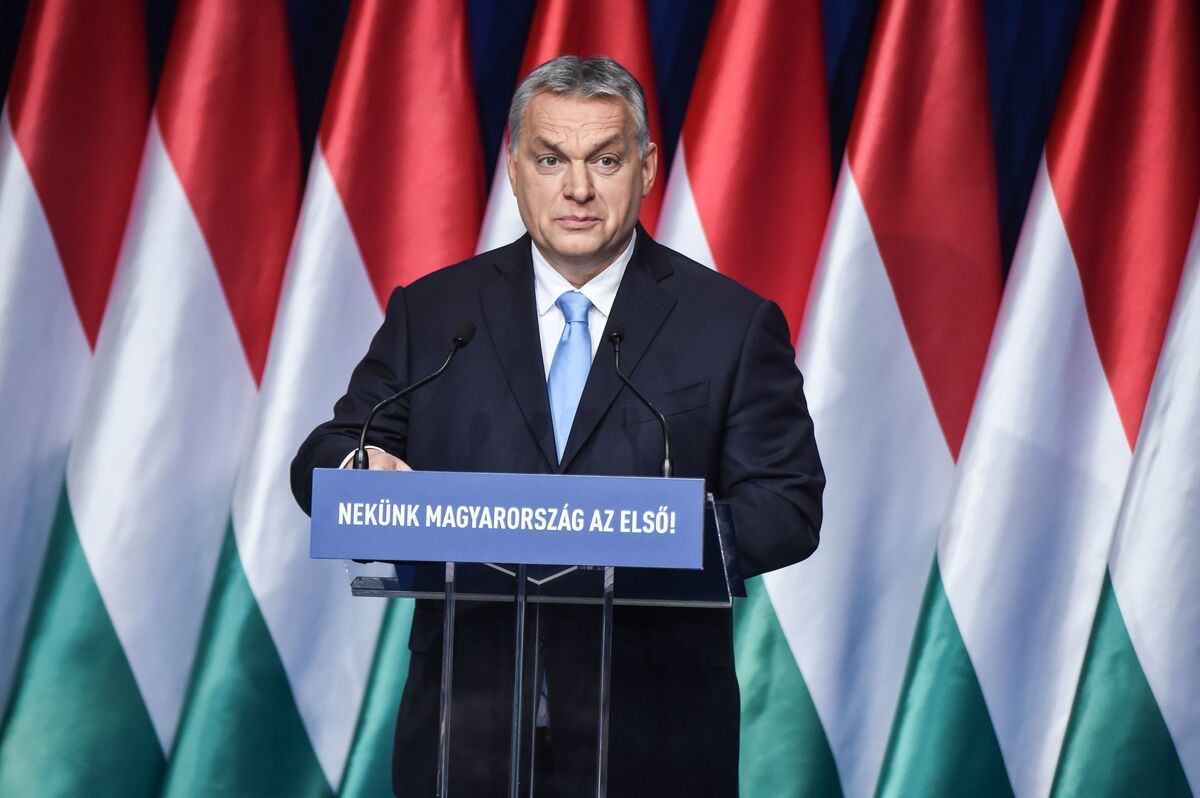 Hungarian Prime Minister Viktor Orban delivers his state of the nation speech in front of his party members and sympathizers at a cultural center in Budapest, Hungary, on Feb. 10.

"Those of us who remained expected the new owners would interfere with our work, so we were trying to figure out what we could do about it," Nimmerfroh says. "And then they summoned us to Budapest and fired us. I thought I'd never work in journalism again."

President Trump and other leaders around the world, including presidents Jair Bolsonaro in Brazil and Rodrigo Duterte of the Philippines, slam critical media coverage as "fake news."

But in Hungary, Orban has done more than complain. Over the past decade, his government and its allies have systematically taken control of roughly 90% of media outlets here. That much control over key sources of information and commentary in the country could prove crucial ahead of European Parliamentary elections May 23-26, when Orban allies will try to increase the clout of anti-immigrant nationalists in Brussels.

"They have achieved the highest level of controlling the media across Europe," says Marius Dragomir, the director of the Center for Media, Data and Society at Central European University in the Hungarian capital of Budapest

He explains what that means: "You have media regulators under your control, giving licenses to TV stations . You have control over a public broadcaster that has nationwide coverage. ... And you have control over 60-70% of the commercial media outlets." 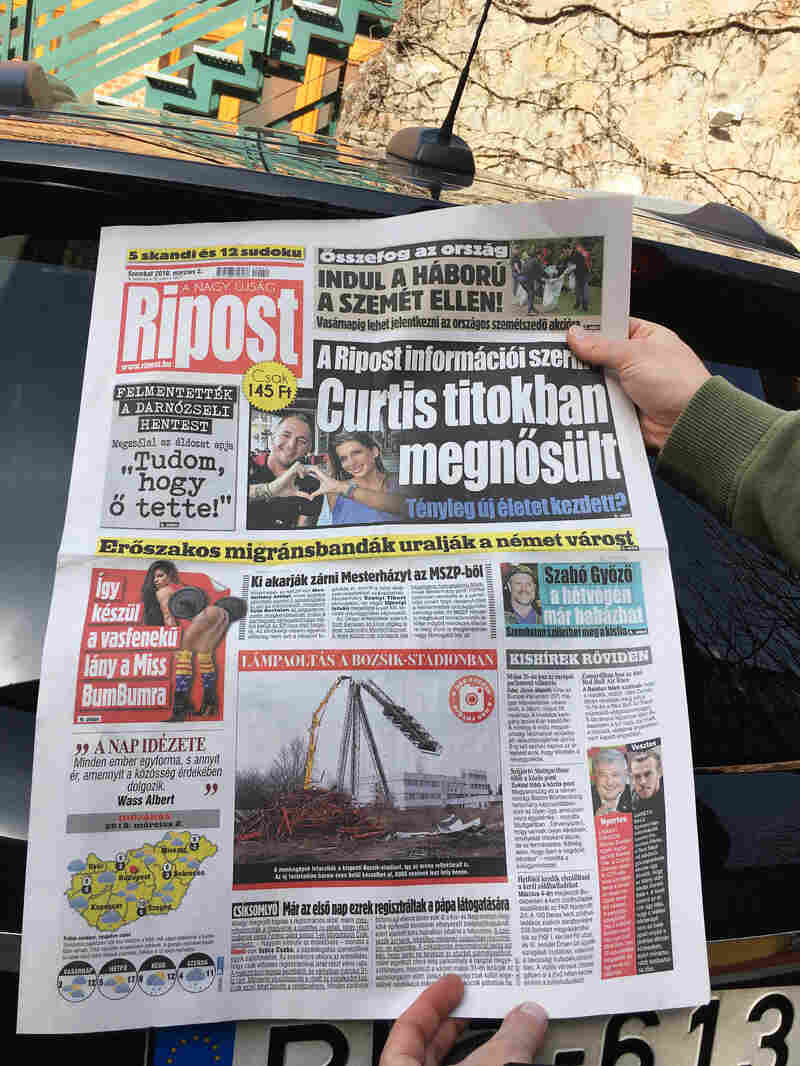 Anti-migrant news is on many front pages of pro-government newspapers in Hungary. Joanna Kakissis/NPR hide caption 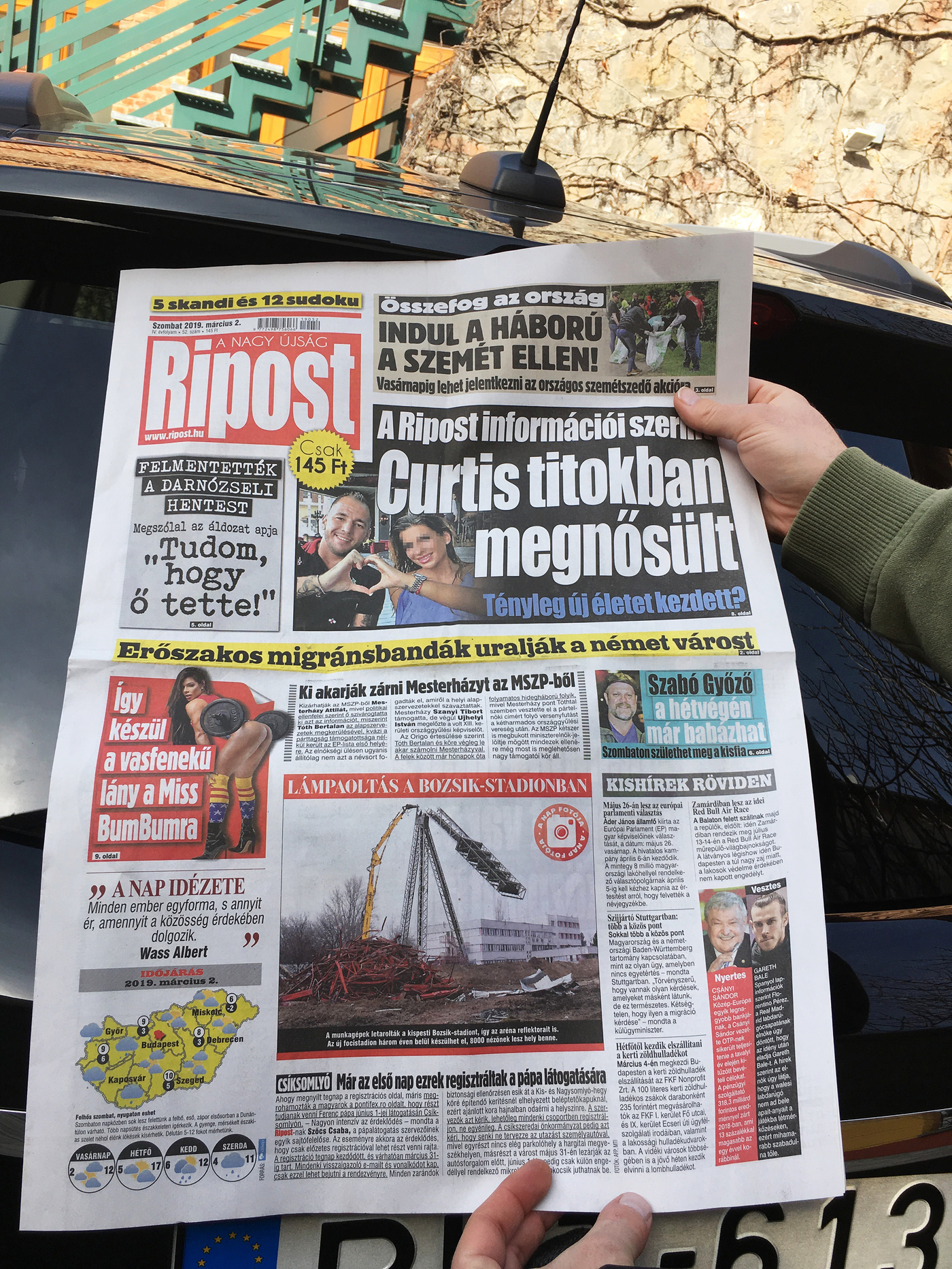 Anti-migrant news is on many front pages of pro-government newspapers in Hungary.

"It's unimaginable in a democracy," he says. "In the U.S., it would be like The Wall Street Journal, the National Review, Rupert Murdoch, the Mercers and Breitbart all saying, OK, I'm voluntarily giving up my media empire and turning it over to a private foundation that is de facto controlled by the government."

The EU is poised to investigate this media conglomerate, after reports that it receives money from the Hungarian state.

But in the meantime, Dragomir, the media scholar, says the network of outlets is churning out narratives praising Orban for holding back "migrant invaders" and vilifying his government's critics.

"The propaganda seems to be very, very powerful," Dragomir says. "People tend to believe many of these things simply because they hear them from so many sources."

Popular targets include George Soros, the Hungarian-American financier whom Orban falsely claims is trying to flood Europe with migrants, and EU leaders, whom the Hungarian leader calls "elites" that have "lost touch with reality."

But even teenagers have found themselves in the crosshairs. After Blanka Nagy, a 19-year-old student, spoke at an anti-government protest, one pro-Orban newspaper falsely claimed she was a delinquent who was flunking out of school. Several other media outlets reprinted the lie.

"You can theoretically ask for a correction, but no one reads those," says Nagy, who sued the newspaper and won, though the case is now on appeal. "So the lie just becomes public knowledge." 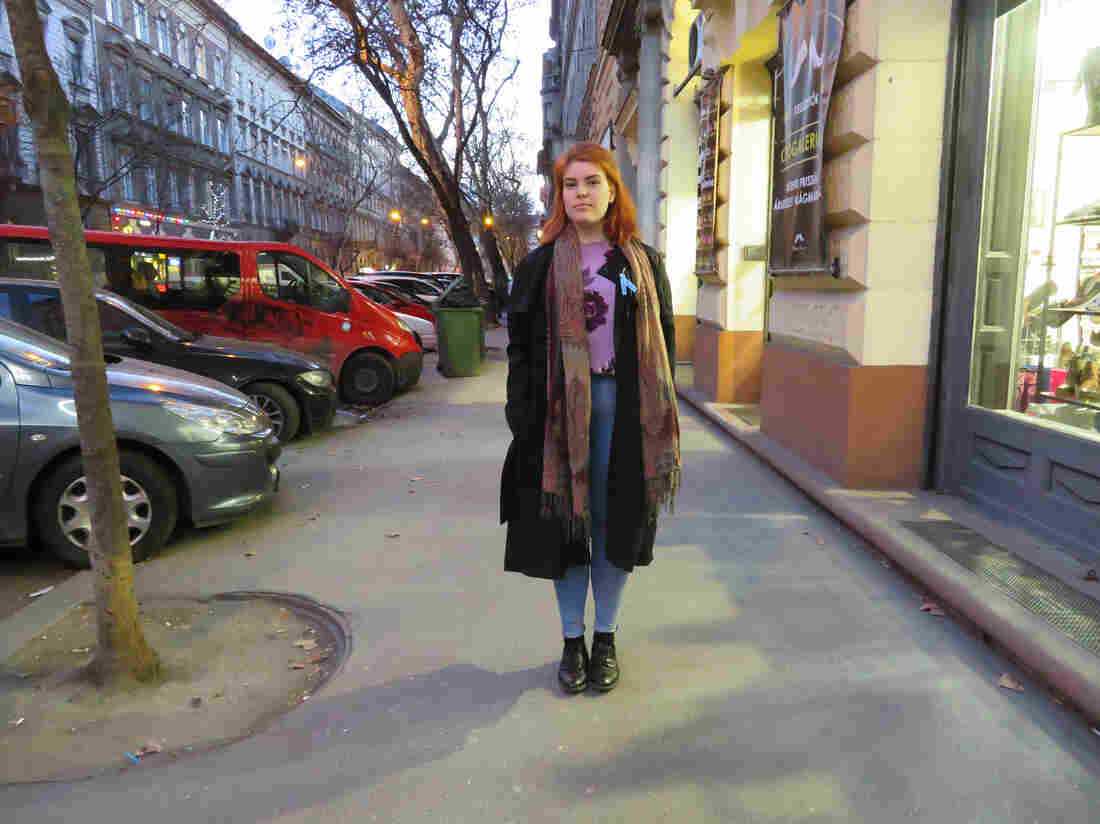 News outlets that back Hungary's nationalist government sometimes try to smear critics. Blanka Nagy, a 19-year-old student, was falsely portrayed as a delinquent flunking out of school after she spoke at an anti-government protest. She sued and won, though the newspaper is appealing. Joanna Kakissis/NPR hide caption 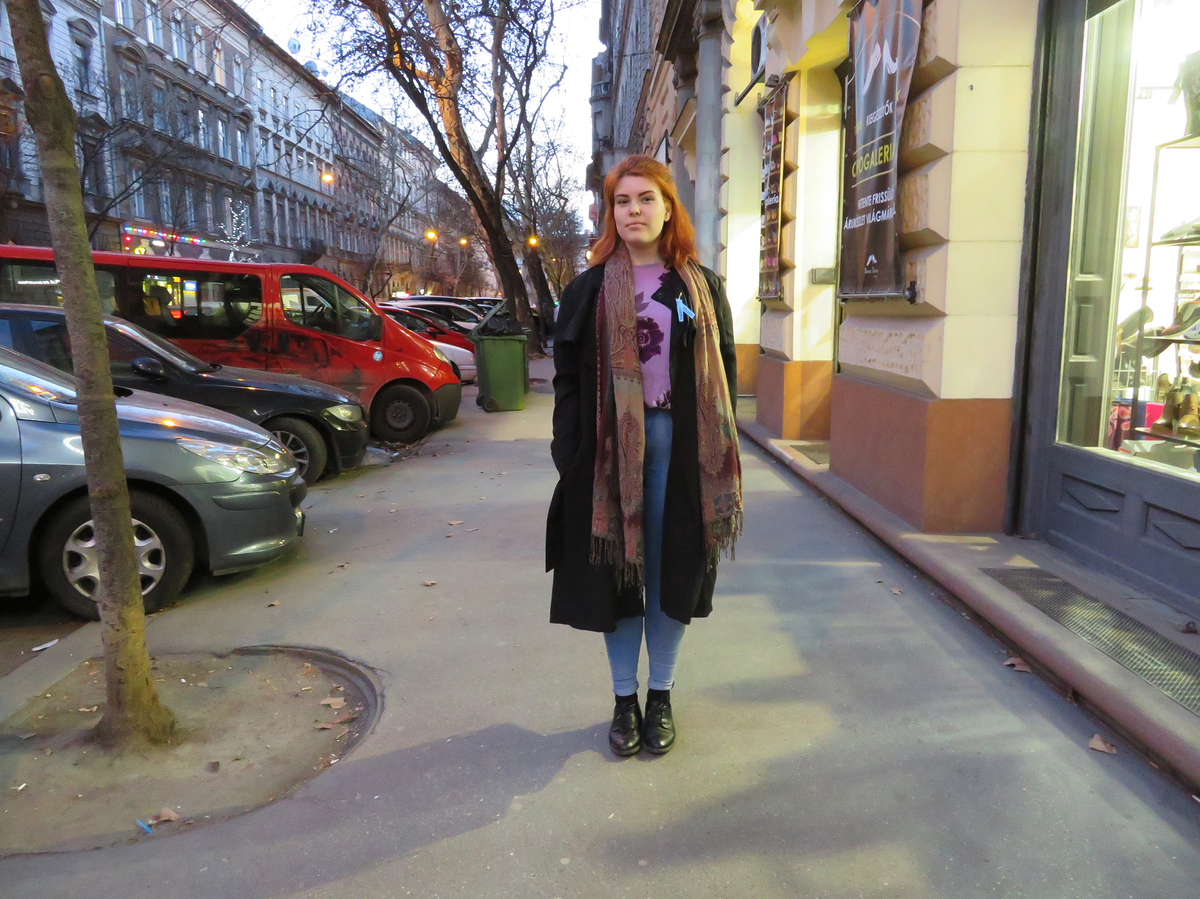 News outlets that back Hungary's nationalist government sometimes try to smear critics. Blanka Nagy, a 19-year-old student, was falsely portrayed as a delinquent flunking out of school after she spoke at an anti-government protest. She sued and won, though the newspaper is appealing.

In Pecs, Nimmerfroh, the editor who lost his job after an Orban-allied media company took over his old newspaper, Dunantuli Naplo, wanted no part of such personal smears. So he signed on to work with a startup founded by his former boss at the paper, who had left after the Mediaworks takeover. The new online newspaper, Szabad Pecs (Free Pecs), bills itself as the city's only source of independent news.

"I've been a reporter my entire adult life," Nimmerfroh says. "I didn't want to stop."

Szabad Pecs is a staff of three. Nimmerfroh and his two colleagues work out of a closet-sized office a few flights up in a building in downtown Pecs. There is barely enough room for two small tables and a coffee machine. It is all they can afford on the money they've raised from crowdfunding, foundation grants and advertising revenue from a local hotel.

"We can only plan a few months at a time," says Nimmerfroh's colleague, Ervin Guth, 37.

Ahead of a deadline, Nimmerfroh and Guth sit across from each on a small corner table and clack away on their laptops. Guth runs through the stories they've covered recently: underfunded schools, suspicious funding of some defective street lights, and the increasing use of surveillance cameras in Pecs.

"We're not trying to topple the government," Nimmerfroh insists. "Nothing like that. We just want to report the facts and do it freely, without interference."

Foreign funding brands them "enemy of the state"

Independent media do exist in Hungary though most are based in Budapest, where Orban has vocal opposition. There's the popular news site index.hu and the TV channel RTL Klub, as well as the investigative reporting outlets Atlatszo and Direkt36.

Outside the big city, it's harder to find funding because few Hungarian donors want to challenge Orban, Dragomir says.

"And if you secure foreign funding, it's even worse, because you are branded an enemy of the state," he adds.

The government denies that it has taken over the country's media. "That's a lie," says Balasz Hidveghi, spokesman for Orban's party, Fidesz, and a candidate for European Parliament. "We have TV channels that are open toward our values and who share the government views. But it has nothing to do with domination. It's a balanced situation. I think the press in Hungary is still dominated by left-wing views."

Journalists who work in pro-government media also insist that they're free to report what they want.

One of Nimmerfroh's former colleagues from Dunantuli Naplo, Mate Boka, now runs the newspaper financed by the Pecs municipality. He resents that journalists who work for pro-government papers are painted as bad guys "just because we have different political views." He says his newspaper and the rebooted Dunantuli Naplo cover themes that unite Hungarians, such as strengthening patriotism or the economy. (The new Mediaworks-backed editor of Dunantuli Naplo declined to speak to NPR.)

"There's no such thing as censorship in media," says Boka, who is in his 40s. "No one tells us what to do, what to write and what not to write. It doesn't matter if you support the government or not."

Though Boka is not a fan of Szabad Pecs, he does read it. Readership for independent media outside Budapest is limited.

NPR spoke to 10 Hungarians in the majestic downtown square of Pecs, where tourists take selfies surrounded by an Ottoman-era mosque and Baroque-style architecture.

Only three locals had heard of Free Pecs, and none had read it.

"I'm not sure if I should bother," says Tunde Batori, a 56-year-old housewife on a lunchtime stroll with her husband. "I don't trust any Hungarian outlets to tell me, objectively, what's really going on."

She has convinced herself that only media outside Hungary sees facts instead of opinion.

"If I want to find out what's happening in Hungary," she says, "I call my daughter in Ireland."