Accessibility links
North Korea's Newest Missile Appears Similar To Advanced Russian Design Experts say the missile, tested on May 4 as part of a "strike drill," could be a new and destabilizing weapon on the Korean Peninsula. 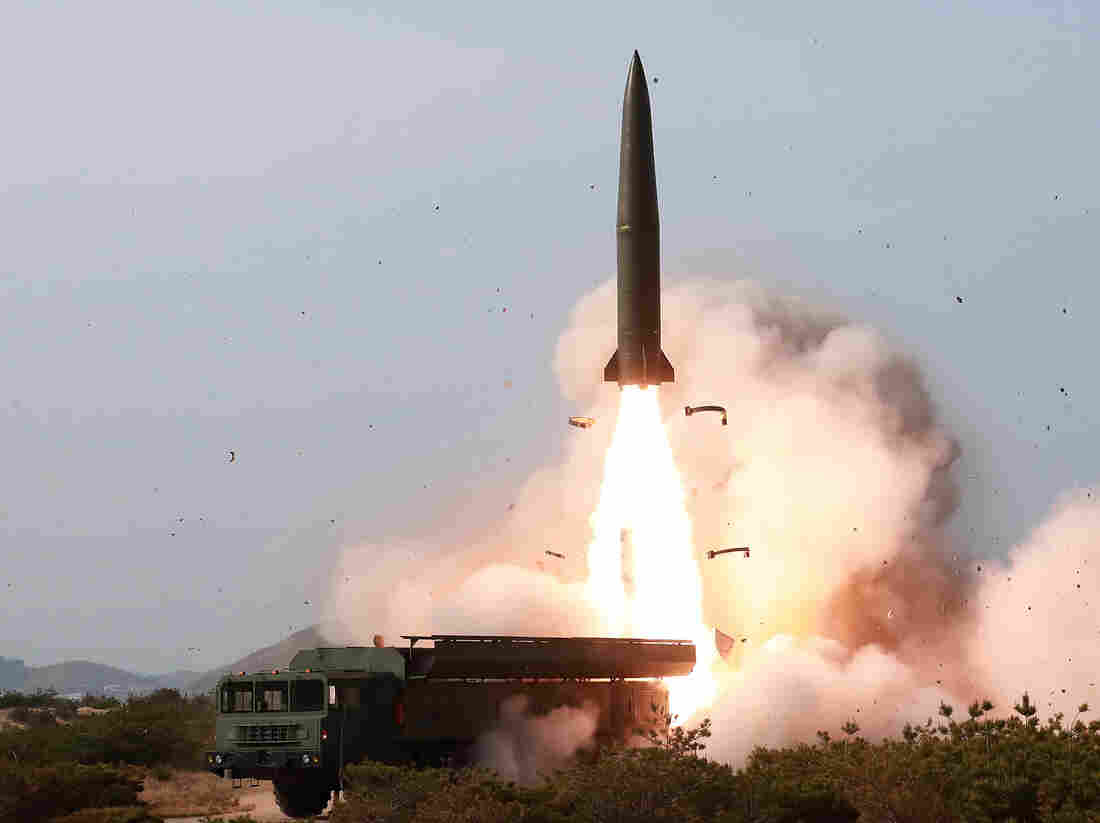 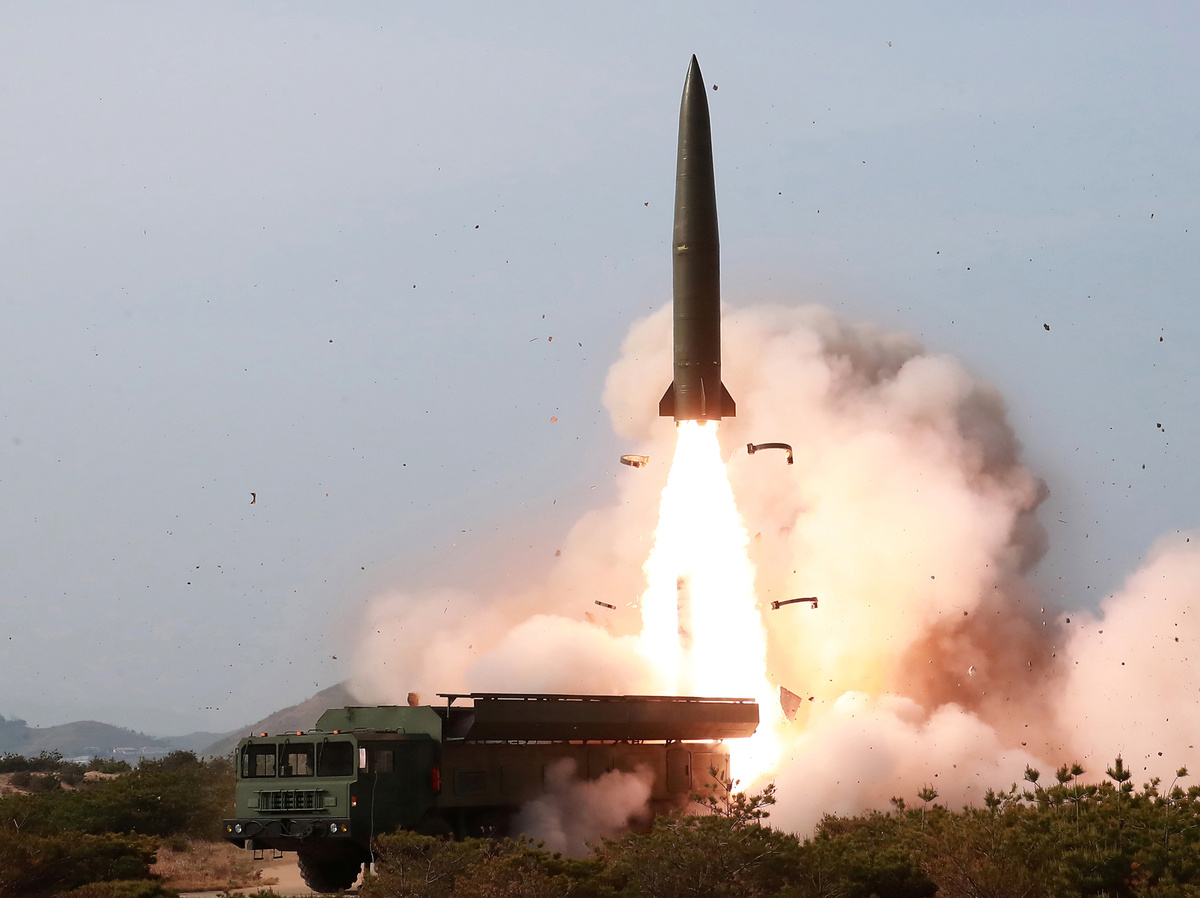 North Korea's newest missile has a striking resemblance to an advanced Russian design, according to experts analyzing images from a test of the weapon on Saturday morning.

The missile, which North Korea describes as a "tactical guided weapon," appears superficially to be nearly identical to Russia's Iskander missile — a highly accurate short-range weapon capable of striking targets more than 150 miles away.

Such a system has the potential to challenge missile defenses in South Korea and further escalate tensions in the region. It also shows that North Korea is developing new weapons systems, even as President Trump expresses optimism about a future deal with North Korean leader Kim Jong Un.

"This Iskander-style missile is a thing we need to start worrying about," says Melissa Hanham, a weapons expert at One Earth Future.

North Korea tested the weapon on May 4 as part of a "strike drill" that included the use of other weapons such as rocket artillery. It was the first publicized test of a missile since North Korea declared a voluntary moratorium on long-range intercontinental missile tests in April 2018. The new missile appears to be short-range, meaning it doesn't violate the moratorium.

Anything in this very interesting world is possible, but I believe that Kim Jong Un fully realizes the great economic potential of North Korea, & will do nothing to interfere or end it. He also knows that I am with him & does not want to break his promise to me. Deal will happen!

President Trump on Twitter downplayed the test. "I believe that Kim Jong Un fully realizes the great economic potential of North Korea, & will do nothing to interfere or end it," he tweeted.

Nevertheless, the new missile does appear to be more advanced than some of North Korea's previous designs. Unlike the North's longer-range missiles, this new short-range missile appears to be solid-fueled, Hanham says. That means the fuel is already in the rocket before it leaves its fortified shelter. It can launch quickly with very little warning, Hanham explains. 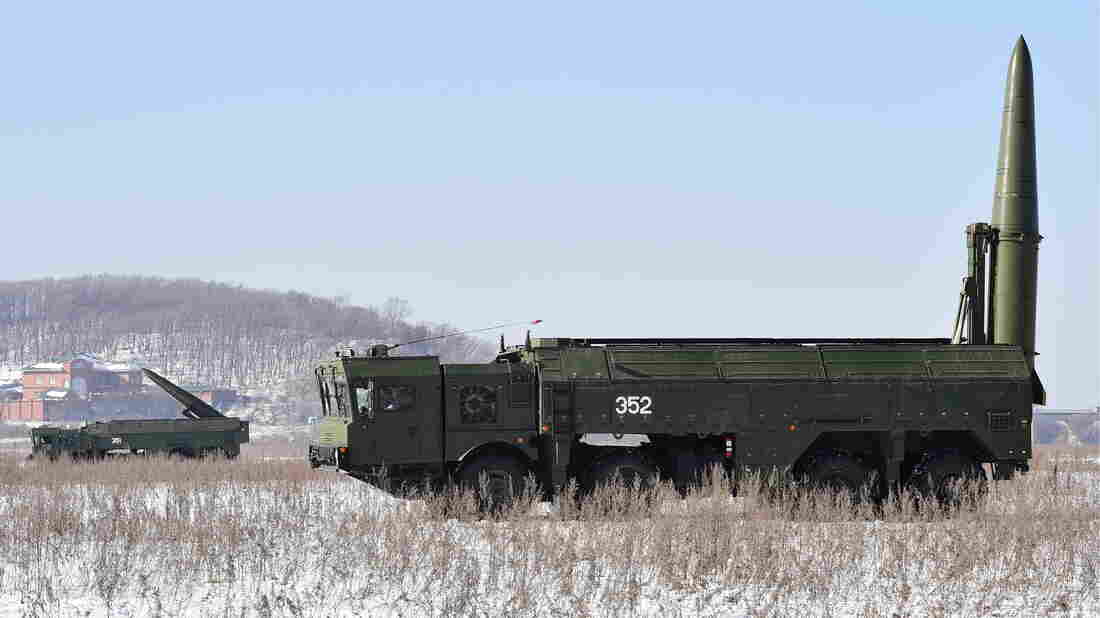 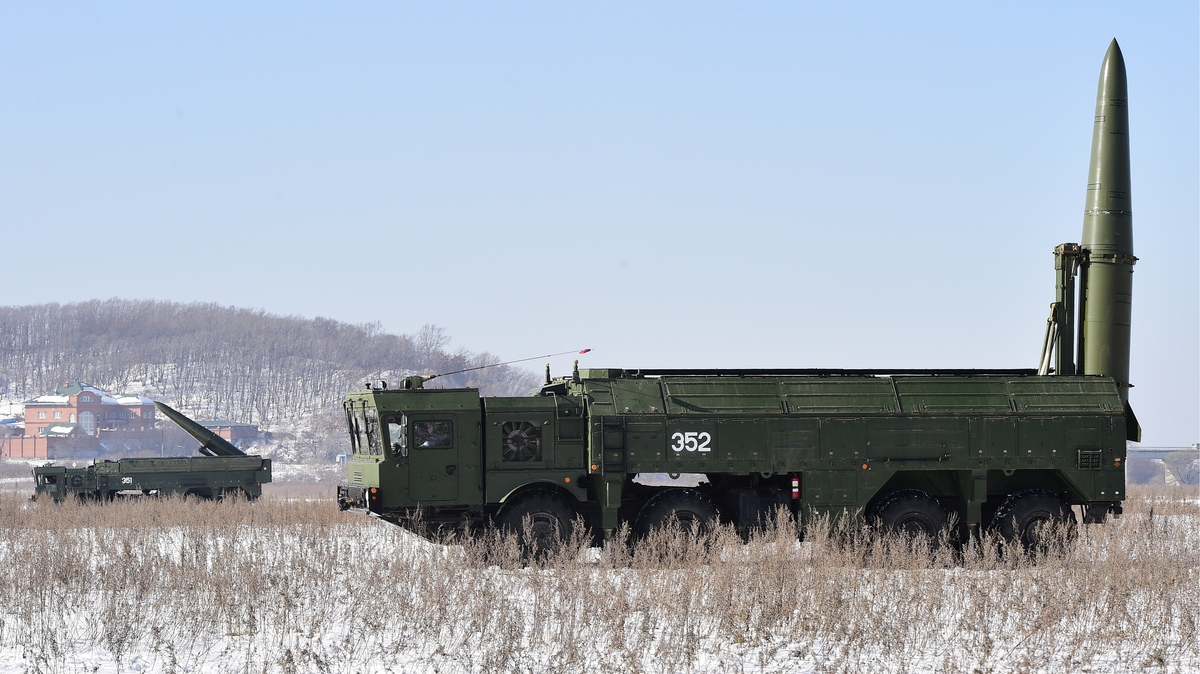 Moreover, if it is an Iskander-like missile, this new weapon will fly at altitudes that will make it hard to intercept, according to Michael Elleman, a physicist and senior fellow for missile defense at the International Institute for Strategic Studies. The Iskander flies at an altitude of roughly 30 miles, Elleman says, too high for U.S. Patriot surface-to-air missile interceptors, but too low for THAAD, a system capable of intercepting longer-range missiles.

Assuming the North Korean version operates in a similar way to the Iskander, "it poses a serious challenge to theater missile defense," Elleman says.

The missile's true capabilities are somewhat murky. Although it appears superficially similar to the Iskander, Hanham and Elleman both note there's no way to know whether it's an imported Russian system, a North Korean knockoff or something else entirely.

"Clearly the North Koreans want us to think it's an Iskander," Hanham says. "The question is, is it really an Iskander?"

There are several other short-range missiles that this new weapon also resembles, adds Jeffrey Lewis, a scholar at the Middlebury Institute of International Studies at Monterey in California. Ukraine's Grom-2 and South Korea's Hyunmoo-2 also look like the new North Korean weapon. "This is just kind of what this class of short-range missiles looks like," Lewis says.

But Lewis adds that regardless of where North Korea drew its inspiration, this new missile is indeed something bigger and better than anything it had in the past. The new weapon is roughly 3 feet in diameter and is capable of carrying a 1,100-pound payload between 217 and 280 miles, according to his team's analysis.

The May 4 test was likely meant to send a message to South Korea, says Jenny Town, a fellow at the Stimson Center and managing editor of the website 38 North. North Korean leader Kim Jong Un is reportedly unhappy with the lack of progress between North and South Korea following a series of summits last year. "I think it's a very deliberate move that is targeted towards the South Koreans," Town says. Kim may hope that the new weapons test will jolt the South into further talks over economic cooperation.

But Town fears the test may have the opposite effect. Because the new solid-fueled missile is clearly a new capability, it will increase the pressure for South Korea to hold military drills of the sort the North hates.

"It actually makes it more difficult for the U.S. and South Korea to postpone military exercises," she says. 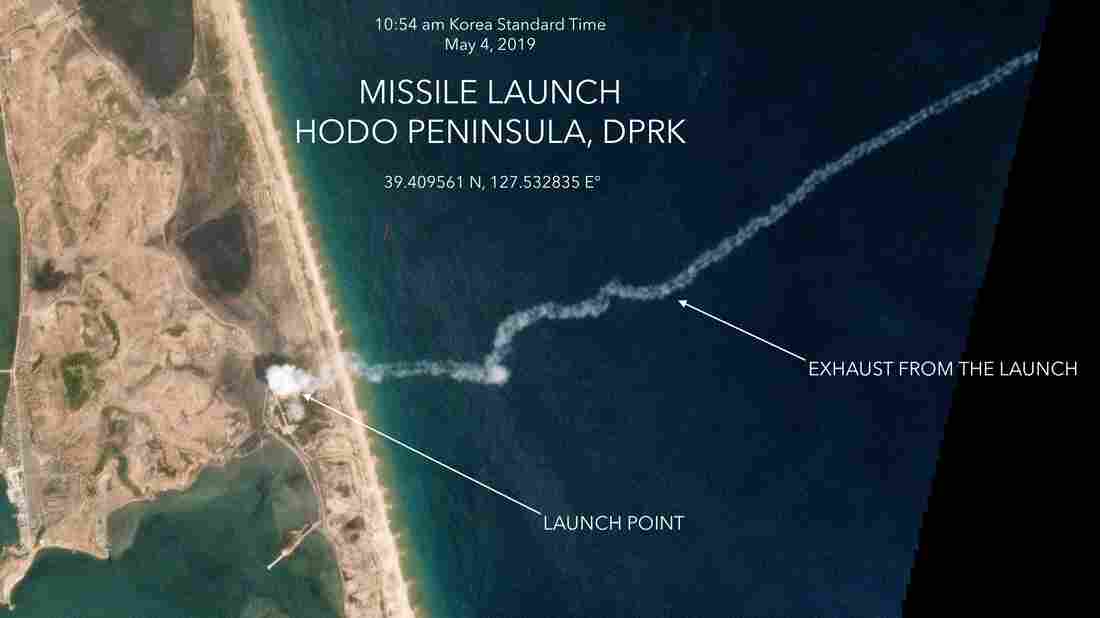 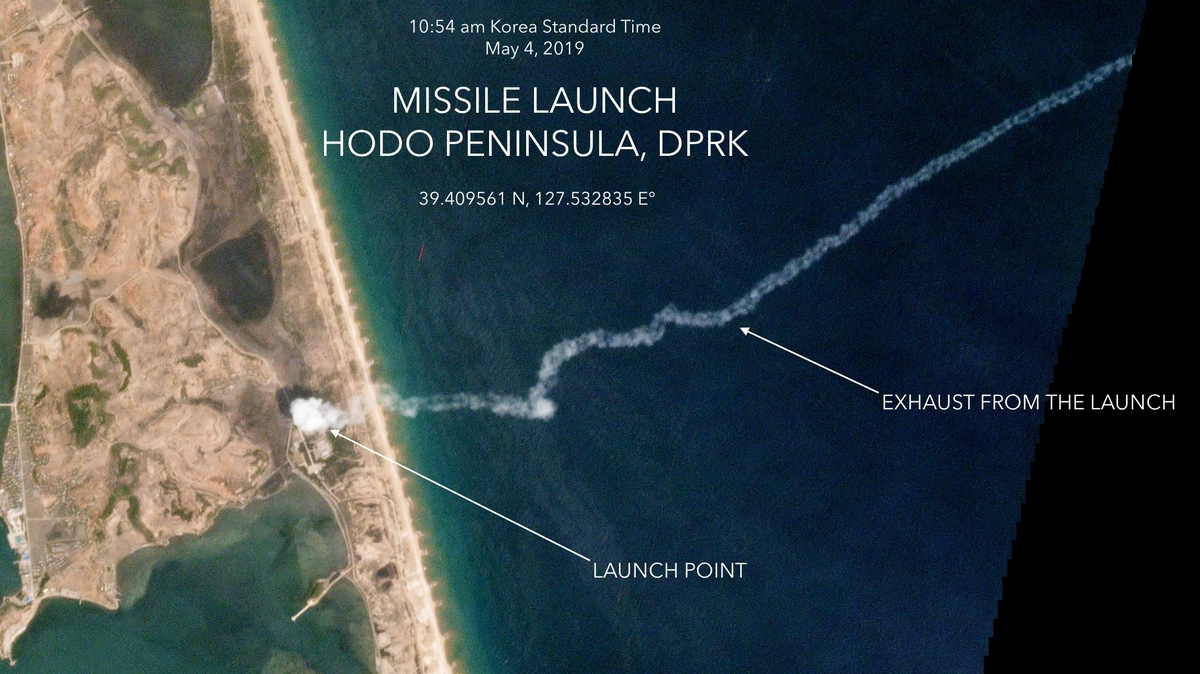 Russia's Iskander possesses one more key capability — it can carry both conventional and nuclear weapons. North Korea has not said whether its new missile is similarly nuclear capable. But based on images of North Korean nuclear weapons, Elleman believes it could be.

"It's possible that their hydrogen bomb could fit into an Iskander-type missile," he says.

Lewis agrees: "The missile is powerful enough to take a nuclear-weapon-sized payload to Camp Humphreys," he says. "Do they want to deploy these weapons with nuclear weapons or not? I don't know."

If it does carry nuclear weapons, then this new missile could be highly destabilizing, Hanham warns.

"A solid-fueled short-range nuclear missile is really bad news for the region," she says. It would be difficult to catch before it launched and could be used to quickly escalate a conflict between North Korea and U.S. and South Korean forces.

"The [scenario] that leads to ICBM usage," she says, "will begin with these smaller missiles."