Accessibility links
Ride-Hailing Companies Uber And Lyft Snarl Traffic, Study Says Researchers compared data from fall 2010 — before the companies made inroads in the city — and fall 2016. They found that the companies are to blame for more than half of a big increase in traffic. 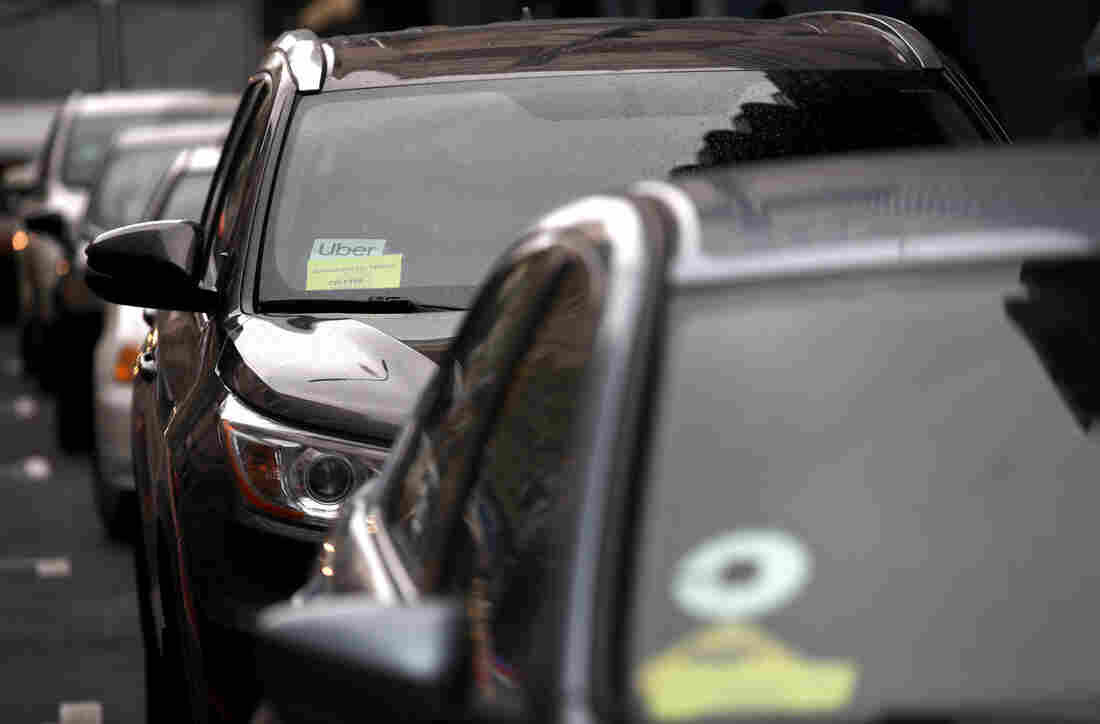 Researchers also found that congestion on the roads in San Francisco also was exacerbated because of where the ride-hailing cars were and at what time of day. Justin Sullivan/Getty Images hide caption 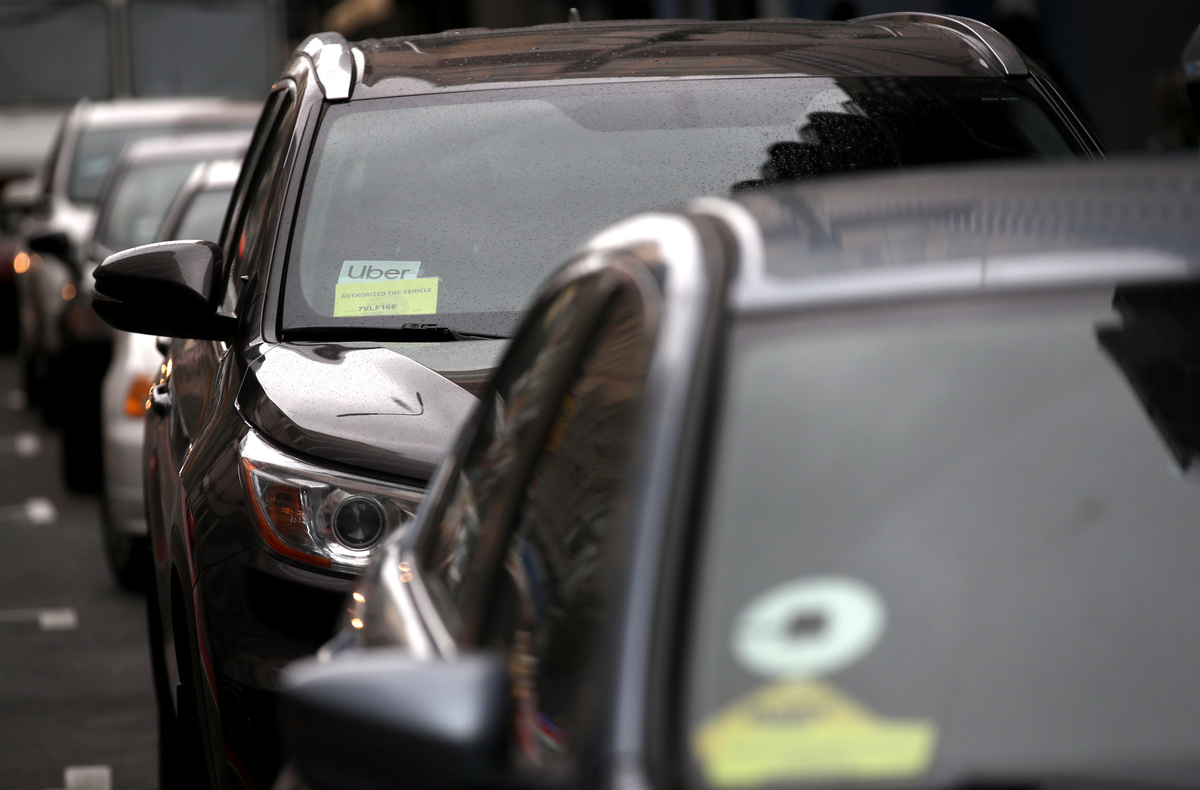 Researchers also found that congestion on the roads in San Francisco also was exacerbated because of where the ride-hailing cars were and at what time of day.

Do ride-hailing companies like Uber and Lyft make a city's traffic worse or better?

In San Francisco at least, the answer is decidedly worse, according to a newly published study in the journal Science Advances.

"It's by far the most detailed look that's been done in any given city," says Bruce Schaller, a transportation expert and former New York deputy commissioner for traffic and planning who was not involved in the study. "And it's certainly consistent with what we're seeing in other places."

University of Kentucky researchers worked with researchers from the San Francisco County Transportation Authority to compare the city's traffic during a six-week period in 2010 — before companies had started major operations in the city — to a similar period in 2016 after they became transportation powerhouses.

They also modeled how traffic would have been in San Francisco in 2016 without Uber and Lyft on the roads, controlling for factors such as population growth and construction.

The amount of time it took to get to a place in traffic versus no traffic "went up by about 60% between 2010 and 2016," says Gregory Erhardt, a civil engineering professor at the University of Kentucky and co-author of the study. More than half of that increase, he adds, is attributable to the two ride-hailing companies. The researchers' model shows that without the presence of Uber and Lyft, congestion would have increased by a more modest 22%.

"To me it was quite surprising to see a change of this magnitude, this quickly," says Erhardt. "I've been doing transportation analysis for a long time and I'm used to seeing small changes of a few percent, not anything of this magnitude. I think it really goes to show sort of the scale at which these have come onto the scene and how rapidly they've grown and made an impact."

The study's findings run counter to some of the rhetoric Uber and Lyft themselves have put forward about the impact of their shared-ride services in cities.

Lyft responded to the study in a statement to NPR. "We're investing deeply in products and new infrastructure for bikes, transit and shared rides to contribute to the greater solution," the company said. "The study in question overlooks notable contributors to congestion including increased freight and commercial deliveries, and tourism growth."

Lyft has also said it aims to "provide the most reliable and sustainable shared ride offerings to improve efficiency and density of the marketplace and reduce congestion on city roads."

Uber did not respond to a request for comment.

The company has said that with lower prices offered through its shared-ride service, "people can move past car ownership, as taking Uber becomes less expensive than using and maintaining a personal vehicle." It added: "And that impact on congestion can be powerful."

But the researchers say that most people don't actually share their cars with other riders. And overall, "about 2/3 of the [ride-hailing] vehicles that are on the road are new vehicles that otherwise would not have been there," says Erhardt. "What matters is what the passenger would have otherwise done."

In general, the researchers say many passengers taking Uber or Lyft rides would have otherwise taken public transportation and not used private cars.

The congestion also is exacerbated because of where the cars are and when, says study co-author Joe Castiglione, the deputy director for technology, data and analysis at the San Francisco County Transportation Authority.

The researchers say they would expect to see similar results in other big, dense cities — but in smaller cities that are more spread out, adding a few more cars to the road probably does not have the same kind of impact on congestion.

One of the challenges the researchers faced in compiling the San Francisco study was "the complete absence of data" from the ride-hailing companies themselves, says Castiglione.

The companies are required to report extensive information about trip details to the California Public Utilities Commission, the state body that regulates them. But Castiglione says the CPUC has not made that data available to cities because it would be "against the public interest." CPUC did not immediately respond to NPR's request for comment.

The data set used in the report, the researchers say, was scraped off the ride-hailing companies' application programming interfaces by Northeastern University researchers. They spent six weeks in 2016, when Uber and Lyft were well-established, sending pings every few seconds from locations all over the city to gather information about what ride-hailing cars were doing around them.

So if Uber and Lyft are indeed dramatically increasing traffic in San Francisco, how should policymakers respond?

The researchers aren't making specific recommendations. Castiglione says they simply intend "to really bring some objective analysis so that more informed choices can be made by our decision-makers."

But Schaller, who has done extensive research on Uber and Lyft nationwide, has warned that "without public policy intervention, big American cities are likely to be overwhelmed with more automobility, more traffic and less transit — and drained of density and diversity, which are indispensable to their economic and social well-being."

Schaller tells NPR that to him, the implication of the San Francisco study is clear:

"The policy outcome needs to be to put some limits on the number of vehicles on the street, just as was done for taxi cabs a century ago in most of these cities and for basically the same reasons."