Accessibility links
Appeals Court Rules That Asylum-Seekers Can Be Made To Wait In Mexico A Ninth Circuit panel overturned a lower court's injunction on the administration's policy requiring asylum-seekers to remain in Mexico as they await court proceedings in the U.S. 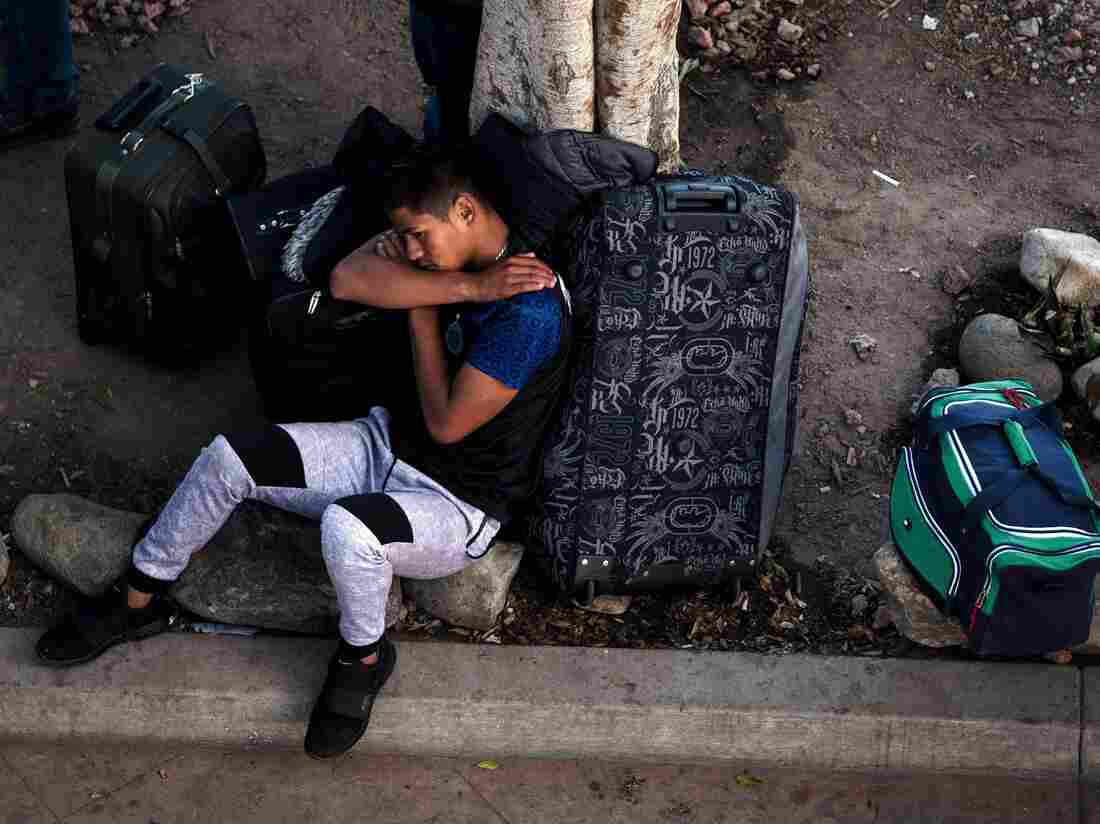 An asylum-seeker rests outside El Chaparral port of entry while he waits for his turn to present himself to U.S. border authorities to request asylum, in Tijuana, Mexico, last month. A federal appeals court has granted the Trump administration's request to temporarily allow the government to continue to return asylum-seekers to Mexico while it appeals an ruling that blocked the policy. Guillermo Arias/AFP/Getty Images hide caption 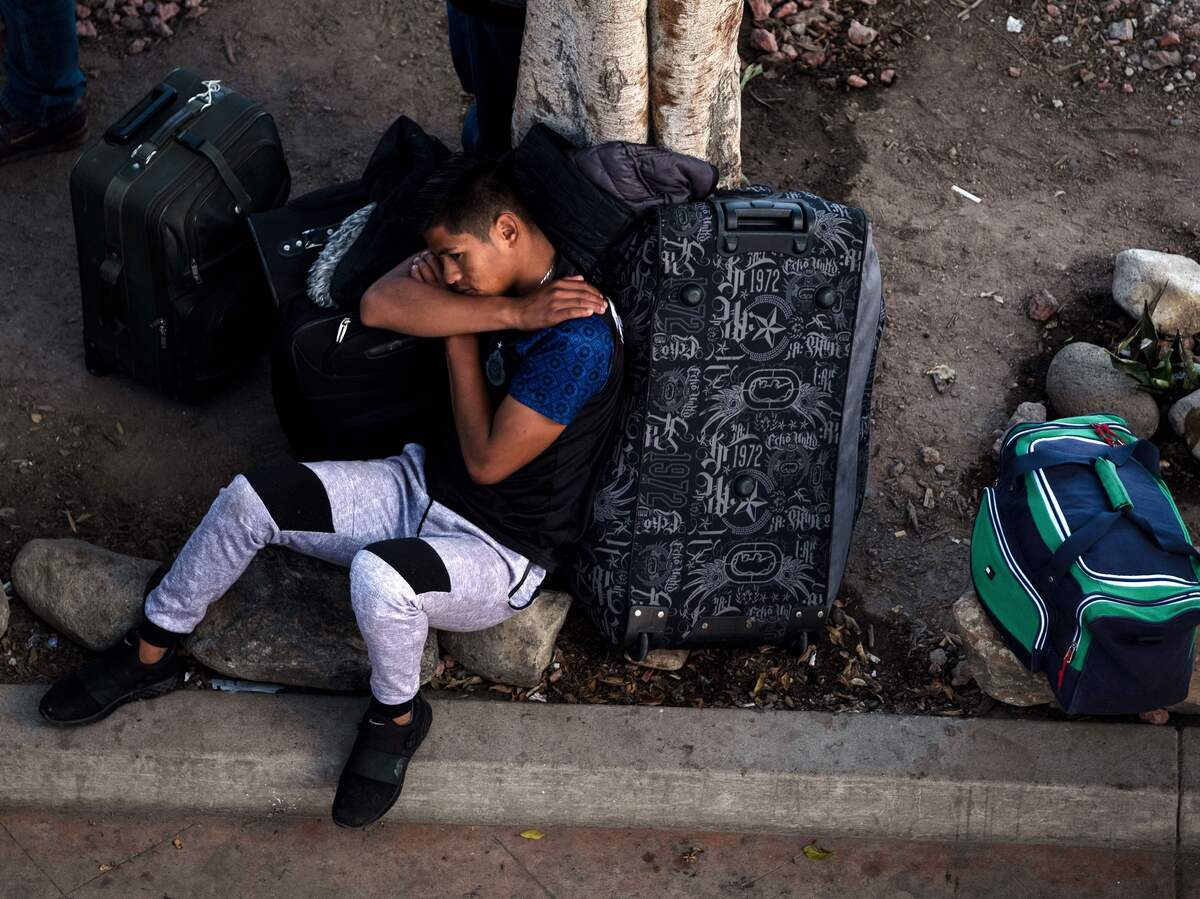 An asylum-seeker rests outside El Chaparral port of entry while he waits for his turn to present himself to U.S. border authorities to request asylum, in Tijuana, Mexico, last month. A federal appeals court has granted the Trump administration's request to temporarily allow the government to continue to return asylum-seekers to Mexico while it appeals an ruling that blocked the policy.

A federal appeals court has ruled that the Trump administration may continue requiring asylum-seekers to remain in Mexico as they await court proceedings in the United States. It might be seen as a victory for Trump, though a temporary one.

A three-judge panel of the Ninth Circuit Court of Appeals overturned a lower court's injunction on the administration's policy officially known as the Migration Protection Protocols. The policy, better known as "Remain in Mexico," was first announced in a December 2018 memo by former Secretary of Homeland Security Kirstjen Nielsen.

"Aliens trying to game the system to get into our country illegally will no longer be able to disappear into the United States, where many skip their court dates. Instead, they will wait for an immigration court decision while they are in Mexico," Nielsen wrote.

A lower court in San Francisco must still rule on merits of the case, which may end up before the Supreme Court. President Trump has routinely criticized the Ninth Circuit, but with the recent confirmation of his appointees, the court has a larger conservative wing.

The legal challenge was brought by 11 Central American asylum applications who were returned to Mexico, and six organizations that provide asylum-related legal services. They argue that the policy endangers asylum-seekers by returning them to Mexico while they await their removal proceedings, in violation of the humanitarian protections to which they are entitled under U.S. and international law.

A district judge in San Francisco ruled in April that the "Remain in Mexico" program lacked sufficient safeguards ensuring that people are not returned to dangerous places. But the judge delayed implementing his injunction to give the government time to appeal.

In the order filed Tuesday, the appellate court concluded that the Department of Homeland Security would likely suffer irreparable harm without a stay "because the preliminary injunction takes off the table one of the few congressionally authorized measures available to process the approximately 2,000 migrants who are currently arriving at the Nation's southern border on a daily basis."

The judges also said that the migrants' fear of danger is reduced by Mexico's commitment to keep migrants safe. "The plaintiffs fear substantial injury upon return to Mexico, but the likelihood of harm is reduced somewhat by the Mexican government's commitment to honor its international-law obligations and to grant humanitarian status and work permits to individuals returned," the judges wrote.

Comments by two of the panel's three judges were critical of Trump Administration policies.

Judge William Fletcher, who was appointed by President Clinton, disagreed with the ruling. He wrote that he is "hopeful that the regular argument panel that will ultimately hear the appeal, with the benefit of full briefing and regularly scheduled argument, will be able to see the Government's arguments for what they are—baseless arguments in support of an illegal policy that will, if sustained, require bona fide asylum applicants to wait in Mexico for years while their applications are adjudicated."

The ACLU is one of the groups that is challenging the policy.

"Asylum seekers are being put at serious risk of harm every day that the forced return policy continues," Omar Jadwat, director of the ACLU's Immigrants' Rights Project, said in a statement. "Notably, two of the three judges that heard this request found that there are serious legal problems with what the government is doing, so there is good reason to believe that ultimately this policy will be put to a halt."