Accessibility links
Iran To Resume Higher Uranium Enrichment If Not Shielded From U.S. Sanctions President Hassan Rouhani announced that Tehran will start keeping larger amounts of enriched uranium and heavy water. Iran's economy has been damaged by the return of U.S. sanctions. 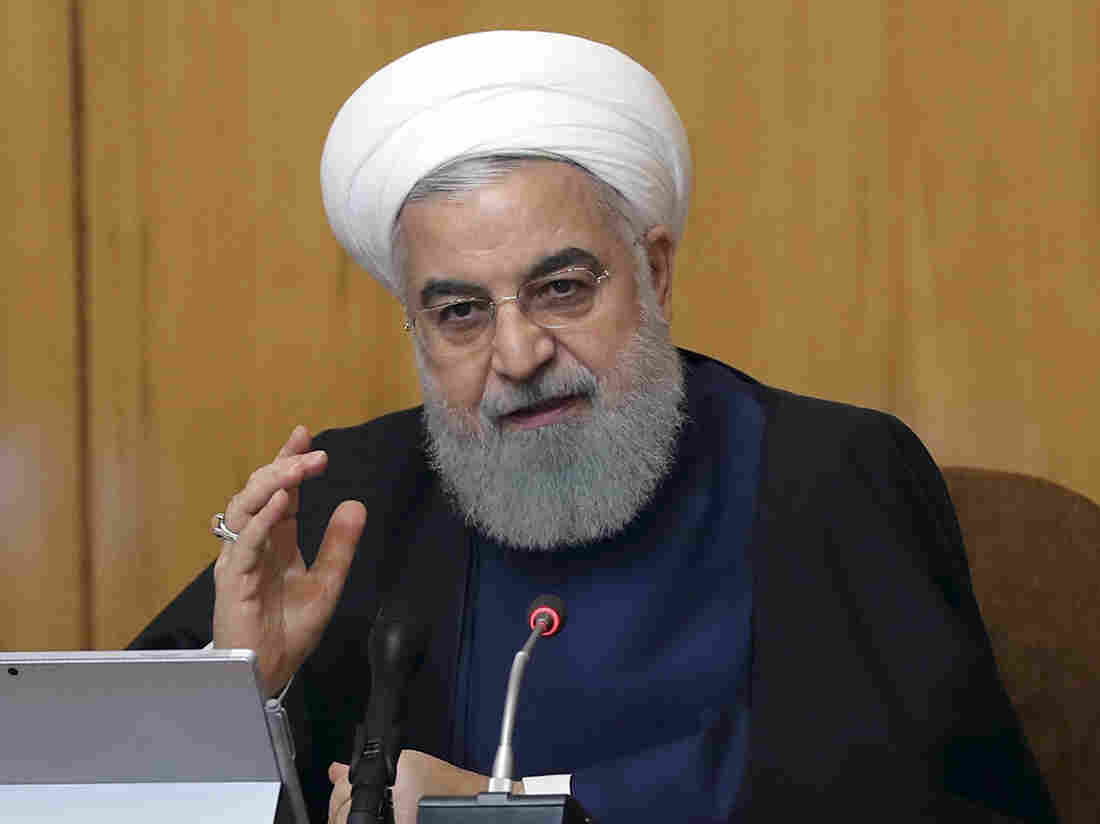 Iranian President Hassan Rouhani says Iran will begin keeping its excess uranium and heavy water, and he set a 60-day deadline for new terms to its nuclear deal before the country will resume higher uranium enrichment. Rouhani is seen here at a cabinet meeting in Tehran on Wednesday. Iranian Presidency Office/AP hide caption 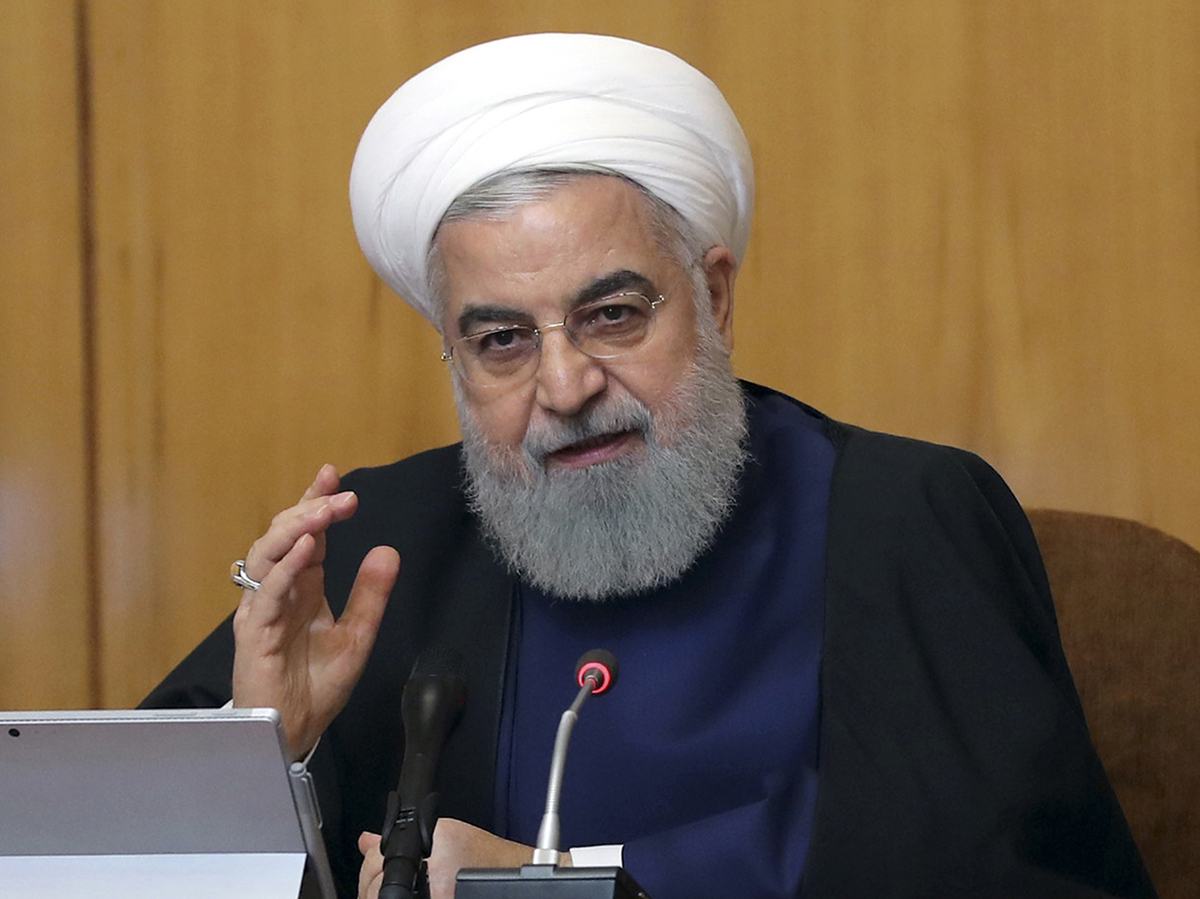 Iranian President Hassan Rouhani says Iran will begin keeping its excess uranium and heavy water, and he set a 60-day deadline for new terms to its nuclear deal before the country will resume higher uranium enrichment. Rouhani is seen here at a cabinet meeting in Tehran on Wednesday.

Iran's president says increased uranium enrichment will begin in 60 days if world powers don't shield it from U.S. sanctions, under the terms of the 2015 nuclear agreement. The move is a signal to the world that Tehran is losing patience with U.S. efforts to punish Iran economically.

The news comes exactly one year after President Trump pulled the U.S. out of the 2015 Joint Comprehensive Plan of Action, calling it "a horrible one-sided deal." In August, the Trump administration restored some of the sanctions that were lifted as part of the deal.

And on Wednesday, Trump announced that he has authorized new sanctions against Iran, targeting the iron, steel, aluminum and copper sectors of the country's economy.

Starting today, Iran does not keep its enriched uranium and produced heavy water limited. The EU/E3+2 will face Iran's further actions if they can not fulfill their obligations within the next 60 days and secure Iran's interests. Win-Win conditions will be accepted.

President Hassan Rouhani announced that Tehran will start keeping larger amounts of enriched uranium and heavy water, instead of selling the excess to other countries, as the deal requires.

And he said that if the other countries in the accord haven't figured out how to shield Iran's oil and banking industries from U.S. sanctions, Iran will begin enriching uranium to higher levels, ending a commitment made under the deal. The return of U.S. sanctions has been damaging to Iran's economy.

"If the five countries came to the negotiating table and we reached an agreement and if they could protect our interests in the oil and banking sectors, we will go back to square one," Rouhani said, according to Reuters.

The Iran deal was negotiated by the Obama administration with the U.K., China, France, Germany and Russia. It paused sanctions in exchange for curbs and checks on Tehran's nuclear program.

Rouhani said the announced actions are in line with the deal's requirements.

U.S. national security adviser John Bolton released a statement Sunday night that said the U.S. "is deploying the USS Abraham Lincoln Carrier Strike Group and a bomber task force to the U.S. Central Command region to send a clear and unmistakable message to the Iranian regime that any attack on United States interests or on those of our allies will be met with unrelenting force."

Iran said the aircraft carrier was simply being rotated in as scheduled and called Bolton's announcement "psychological warfare." The Pentagon confirmed the move was a scheduled rotation but said it had been "expedited," Reuters reports.

Brian Hook, a State Department adviser on Iran, told NPR's Morning Edition that "we had indications of heightened Iranian readiness to conduct offensive operations against U.S. forces and or interest in the Middle East. So after we received these multiple credible threats by Iranian regime forces, we repositioned our military assets accordingly."

"We obviously are not looking for war with Iran," Hook said, "but we are postured and ready to defend U.S. forces and interests in that region."

"If US and clients don't feel safe, it's because they're despised by the people of the region — blaming Iran won't reverse that," Iranian Foreign Minister Mohammad Javad Zarif said on Twitter.

"I think Brian Hook is right that the United States does not want war, and I think the Iranians also don't want war," Ariane Tabatabai of RAND told NPR's All Things Considered. "The challenge, though, is that we don't currently have an off-ramp — official channels of communication that would allow us to de-escalate and avoid miscalculation that could actually lead to conflict."

In a statement Wednesday announcing the new sanctions, Trump said that it will impact the metals sectors that are worth 10 percent of the country's export economy. The restrictions put "other nations on notice that allowing Iranian steel and other metals into your ports will no longer be tolerated," he added, and warned that Iran "can expect further actions unless it fundamentally alters its conduct."

Iran's actions seem to have put other signatories of the deal in a difficult position. As NPR's Michele Kelemen reports, the U.K., France and Germany are urging Iran to reconsider enriching uranium to higher levels.

"This is a very serious moment and we strongly urge them to reconsider what they said in the letter," said British Foreign Secretary Jeremy Hunt.

"Our opinion is and remains: We want to preserve the agreement, in particular to prevent Iran from coming into possession of nuclear weapons," German Foreign Minister Heiko Maas told reporters, according to The Associated Press. "We don't need further escalation in the region."

China's foreign ministry said Wednesday that the U.S. had "further aggravated" tensions with Iran and called on all parties to exercise constraint, the AP reports. Russian Foreign Minister Sergey Lavrov, who was meeting with Zarif on Wednesday, said the accord had been complicated by Washington's "irresponsible behavior."