Accessibility links
'The Pioneers' Dives Deep Into Lives Of Northwest Territory Settlers Like David McCullough's other books, this one succeeds because of the author's strength as a storyteller; it reads like a novel and is packed with information drawn from painstaking research.

'The Pioneers' Dives Deep Into Lives Of Northwest Territory Settlers

'The Pioneers' Dives Deep Into Lives Of Northwest Territory Settlers 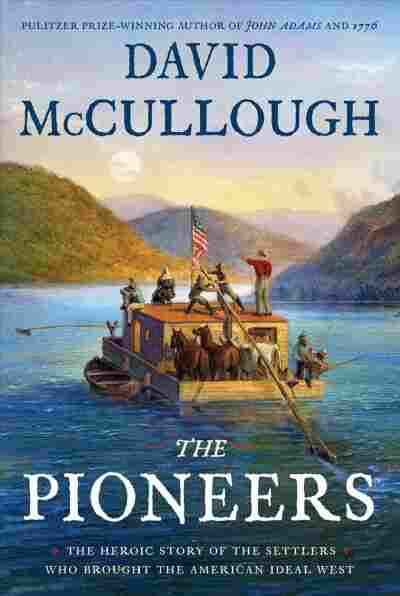 David McCullough is best known to most readers for his popular biographies of some of the most prominent names in American history — Theodore Roosevelt, Harry S. Truman, John Adams and the Wright Brothers have all been subjects of his meticulously researched volumes.

Occasionally, though, he delves into the lives of historically significant people whose names likely aren't familiar to most Americans. That's the case with his latest book, The Pioneers, which tells the story of the 17th- and 18th-century settlers who set out to start lives in the Northwest Territory, the region of the country that is now Ohio, Indiana, Illinois and much of the Upper Midwest. It's a fascinating look at a chapter in American history that's been somewhat neglected in the country's popular imagination.

The Pioneers begins with the story of a man named Manasseh Cutler, a New England pastor who played a key role in the passage of the Northwest Ordinance of 1787, which created the Northwest Territory and prohibited slavery anywhere within it. The anti-slavery language in the ordinance had been far from a sure thing, and Cutler had lobbied hard for its inclusion. The resulting ordinance, McCullough writes, "stands alongside the Magna Carta and the Declaration of Independence as a bold assertion of the rights of the individual."

Not long after, the first pioneers set out to the new territory. Manasseh Cutler, citing obligations at home, declined to join the settlers, but his 19-year-old son, Jervis, did. McCullough recounts the first voyage by New Englanders to the Northwest Territory beautifully, detailing the sometimes difficult but ultimately successful trip to what's now Marietta, Ohio: "As long and arduous as was so much of the journey, there had been no loss of life, nor, as plainly evident, no loss of spirit."

Obviously, the pioneers weren't "settling" an unoccupied land. Several tribes of Native Americans, including the Delawares and Wyandots, called the Northwest Territory home, and while they initially greeted the New Englanders, relations between the two groups quickly strained. A series of battles between the Native Americans and the U.S. military ensued; hundreds would die before the Treaty of Greenville, which further displaced the local tribes, was signed in 1795.

McCullough's book is told from the point of view of the pioneers, of course, and doesn't focus much on the Native Americans whom they displaced. The stories he tells also center mostly around the male settlers, which he explains in the text:

"In contrast to the many surviving letters and journals by the men who came west, first-person accounts by the pioneer women are disappointingly scarce, and even they record little of the struggles and hardships faced. There was, it would seem, widespread reluctance on the part of women to subject those they loved back home to any of their troubles or fears or regrets."

He also makes the narrative choice to tell the story of the pioneers through several specific people, which lends the book a more personal and intimate feel. Readers learn about people like Ephraim Cutler, Manasseh's oldest son, an Ohio state legislator who was instrumental in keeping slavery out of the state, as well as in establishing Ohio University.

McCullough also introduces readers to less savory characters, like Harman Blennerhassett, the owner of a mansion and island on the Ohio River. Other pioneers viewed Blennerhassett and his wife with suspicion, which proved to be justified — the couple were not just husband and wife, as it turned out, but also uncle and niece. The two were forced to flee their luxurious home after Harman was implicated in the Burr conspiracy, in which former Vice President Aaron Burr was accused of establishing a country of his own in the Texas Territory.

Like McCullough's other books, The Pioneers succeeds because of the author's strength as a storyteller. The book reads like a novel, with a cast of fascinating characters that the average reader isn't likely to know about; while history textbooks use broad strokes to paint the picture of the early settlers to the Northwest Territory, McCullough takes a deep dive, and does so with assured, unshowy prose.

The result is an excellent book that's likely to appeal to anyone with an abiding interest in early American history. Both readable and packed with information drawn from painstaking research, The Pioneers is a worthy addition to McCullough's impressive body of work.

Read an excerpt of The Pioneers