Accessibility links
South Africans Cast Votes For President And Parliament The governing African National Congress saw its reputation tarnished in the wake of scandals and high unemployment. The election is largely seen as a referendum on the political party. 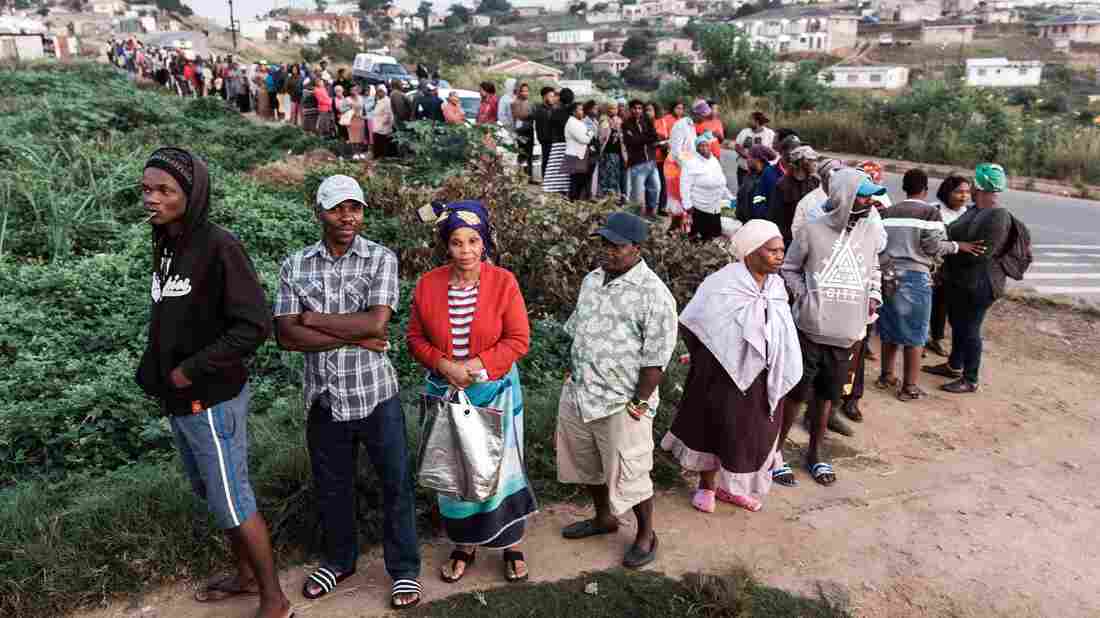 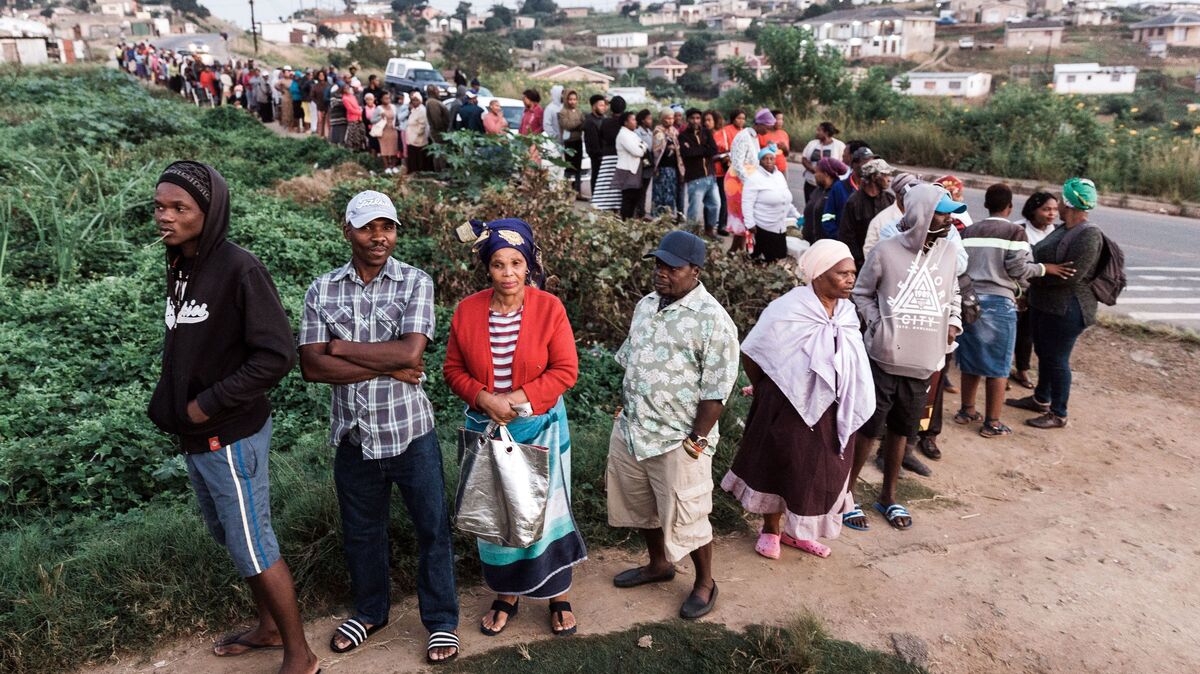 Hundreds of South African voters wait in long lines outside of a polling station in Durban on Wednesday.

Votes are being counted with results expected in the coming days after South Africans went to the polls Wednesday in what's being seen as a referendum on the party that's governed the country for 25 years, since apartheid ended.

Local outlets report that turnout in townships appeared low on the public holiday, especially compared with the 1994 elections, the first time citizens from every race could participate. That year, Nelson Mandela was sworn in as South Africa's first democratically elected, and first black, president to lead a hopeful nation.

His party, the African National Congress, is expected to retain a majority, but its margin for victory and sway on South Africa's provinces remain to be seen.

Despite the ANC's storied past as the liberation movement that brought freedom and an end to apartheid, its reputation has suffered in recent years from rampant corruption, influence-peddling scandals and accusations that it failed to deliver on a promise to end inequality for black South Africans who suffered in the times of institutionalized segregation.

Jacob Zuma resigned as president in 2018 amid widespread allegations of graft. He was succeeded by his deputy, Cyril Ramaphosa, Mandela's original chosen successor. President Ramaphosa promised to "continue to improve the lives of our people."

At a recent ANC campaign rally, he also apologized for his party's mistakes.

As part of his bid to be elected, which would secure him a five-year presidential term, Ramaphosa vowed to fight corruption. "The era of impunity, comrades, is over," he said.

The party is reportedly banking on "Ramaphoria," voters' loyalty to Ramaphosa, despite senior leaders' skepticism of what his reforms could mean in practice. Voters appear to be prepared to give Ramaphosa a chance.

He has faced off against Mmusi Maimane, who leads the country's main opposition party, the Democratic Alliance. Maimane accused the ANC of endemic corruption and failing to fully deliver on housing, jobs, land distribution and other basic needs.

Another opposition candidate, Julius Malema, was ousted from the ANC in 2012 and founded the Economic Freedom Fighters the next year. His party is expected to gain support, according to poll predictions.

Malema, once a protege of Zuma, supports the expropriation of white-owned land without compensation for owners.

And with Ramaphosa's tepid support, the ANC is now looking into amending the Constitution to allow such land seizures. Ramaphosa said the reform would happen "in a manner that takes the interests of all into account," according to The New York Times.

Many young South Africans chose not to participate in Wednesday's elections. "We have the lowest voter registration among young people than we have ever had," South Africa-based social analyst Tessa Dooms told NPR. "So the uptake for young people aged 18, 19 and 20, which is definitely first-time voters, is below 20% of that cohort."

Lerato Lekoale, a 31-year-old voter, says it's a pity so many young South Africans decided not to register to vote, after Mandela and many other anti-apartheid stalwarts risked or gave their lives so that future generations could vote in a free South Africa.

"I'm standing there and thinking, does anyone else get emotional about voting anymore?" she said. "Young people don't seem to understand what it took to afford us this privilege, this right," she added.

Another voter, Nkosikhulule Nyembezi, told NPR that South Africa is a young democracy that needs to be given a chance. "The troubling thing is that the gap between the haves and the have-nots is widening," he said.

Despite being Africa's second-largest economy, South Africa has an unemployment rate of about 27%, and the growth in gross domestic product per capita has been "close to nil since 2014," according to the World Bank. Inequality has persisted despite the end of apartheid, the financial institution added. In 2015, the richest 10% of South Africa's population held about 71% of net wealth, while the bottom 60% of the population held 7%.