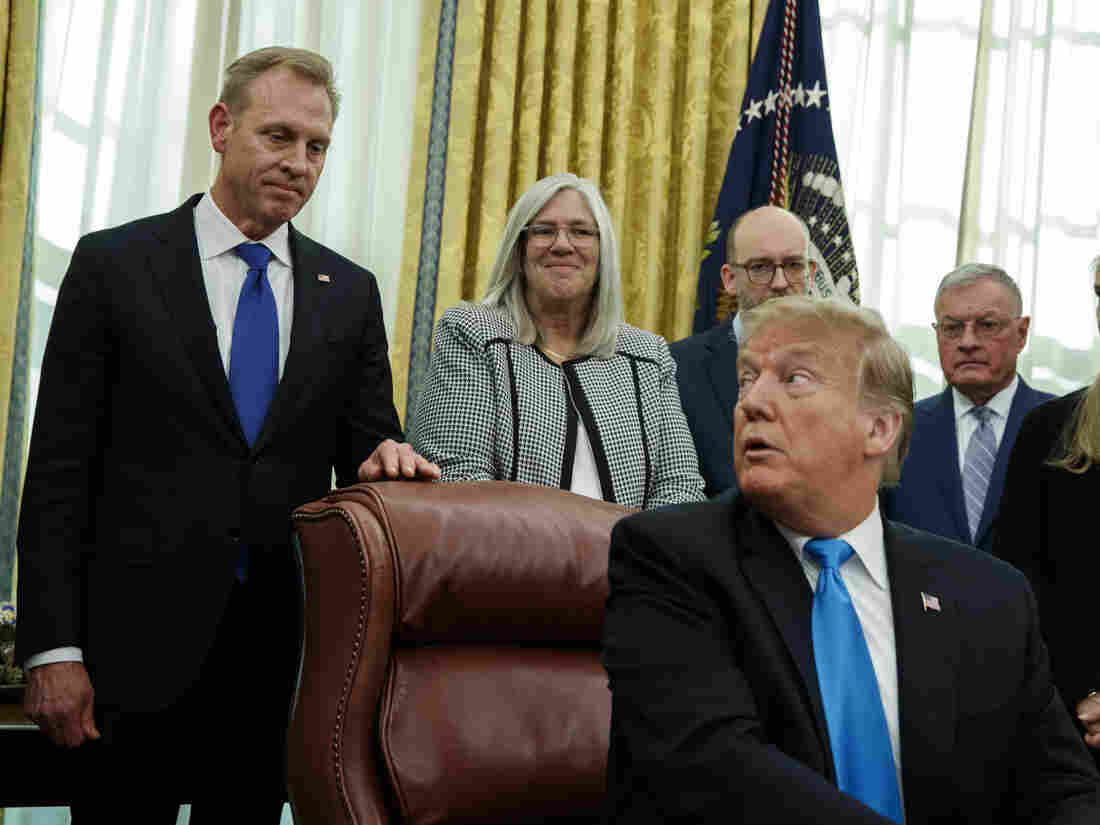 Acting Secretary of Defense Patrick Shanahan listens as President Trump speaks during a signing event for "Space Policy Directive 4" in the Oval Office of the White House in February. Evan Vucci/AP hide caption 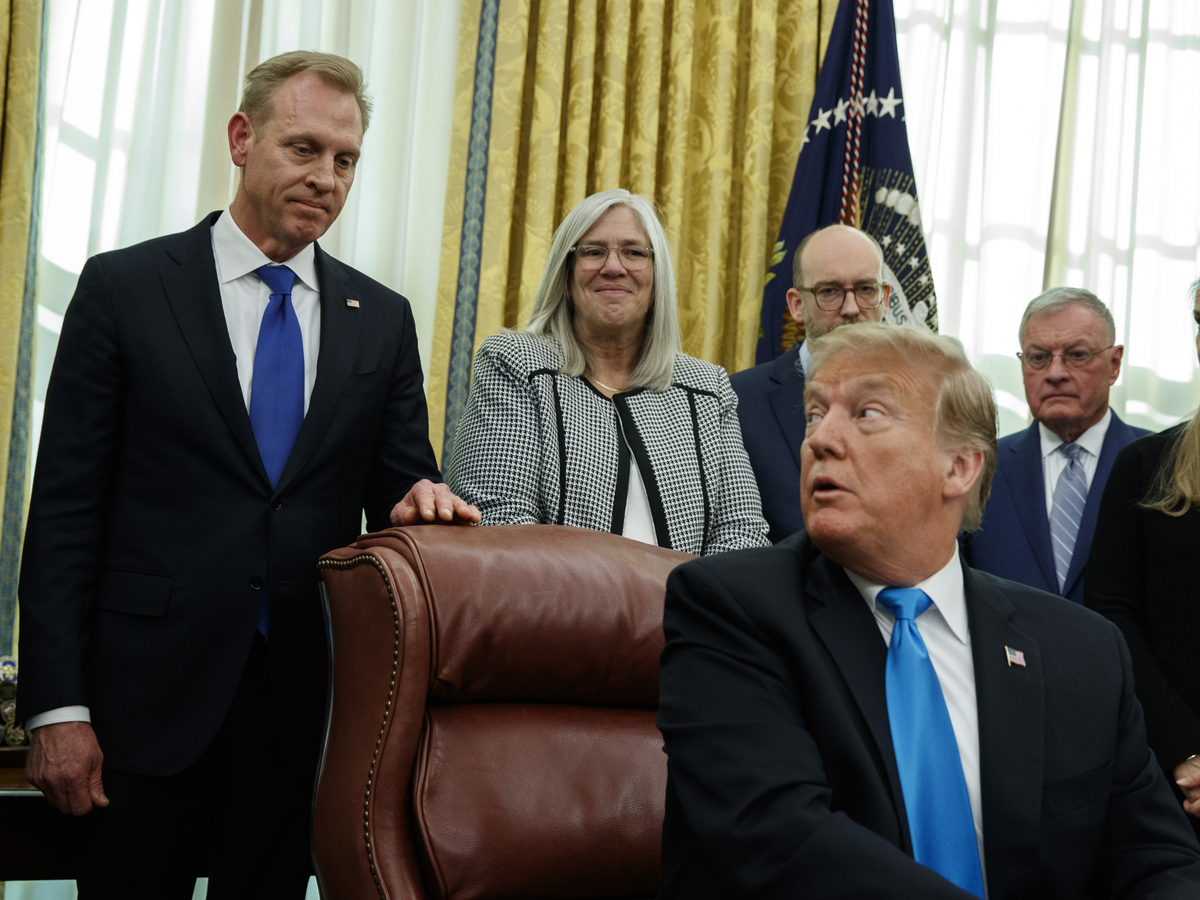 Acting Secretary of Defense Patrick Shanahan listens as President Trump speaks during a signing event for "Space Policy Directive 4" in the Oval Office of the White House in February.

"Acting Secretary Shanahan has proven over the last several months that he is beyond qualified to lead the Department of Defense, and he will continue to do an excellent job," Sanders tweeted.

He joined the Trump administration as deputy defense secretary in 2017. When Defense Secretary Jim Mattis abruptly resigned last year over Syria policy, Shanahan was immediately thrust into the top job.

"I spent the better part of 18 months, if you will, sitting in the right seat of the cockpit with Secretary Mattis in the left seat," Shanahan said in January at his first — and so far only — meeting with the press in the Pentagon briefing room, appropriately using an aircraft metaphor when asked how he was doing in his new job.

"So most of the material, the subject matter and the interactions are with people and subjects that are very, very familiar," he said.

Shanahan brings less government experience to the position than any defense secretary since the department's creation in 1947, with the exception of Neil McElroy, who served on the White House Conference on Education during the Eisenhower administration after a career at Procter & Gamble.

A congressional aide told NPR that Shanahan, during an office visit earlier this year, seemed overwhelmed by his new job of acting secretary.

The White House reached out to others for the top defense post, including Sen. Lindsey Graham, the South Carolina Republican, and retired Army Gen. Jack Keane. Both turned it down.

But recently, says a source close to the White House, Trump "got used to [Shanahan]."

Some Pentagon officials have said Shanahan is neither a forceful presence nor well-versed in foreign or defense policy. Shanahan himself suggested as much during his Senate confirmation hearing as deputy defense secretary in 2017.

"I believe my skill set strongly complements that of Secretary Mattis," Shanahan said. "He's a master strategist with deep military and foreign policy experience. ... I bring strong execution skills with a background in technology, development and business management."

As acting secretary, Shanahan has been a contrast to Mattis, who challenged the White House on policy decisions ranging from the use of torture to allowing transgender service members to remain on duty to keeping U.S. troops in Syria.

Trump used to note approvingly that Mattis' nickname was "Mad Dog." But over time their relationship cooled. In a 2018 interview, Trump even said Mattis was "sort of a Democrat."

Shanahan is very much in charge when it comes to program management, such as creation of the Space Force. More complex military issues, like North Korea, Syria and Afghanistan could fall to others, principally Secretary of State Mike Pompeo and national security adviser John Bolton.

During his time as deputy defense secretary, Shanahan had a hard time finding his footing and needed a lot of direction from Mattis, senior Pentagon aides say. They add that Shanahan was more involved in weapons systems and projects, almost like a project manager rather than a No. 2 Pentagon official who must step back and see the big picture.

At a recent hearing before the Senate Armed Services Committee to discuss the administration's proposed Pentagon budget, Shanahan seemed most comfortable talking about the way ahead for military programs, focusing on how the Pentagon will counter the growing military power of China and Russia.

"China's defense spending approaches that of the United States, when we take into account purchasing power and the portion of our budget going to military pay and benefits," Shanahan told senators.

Shanahan went on to talk about the need for a space force, a pet project of the president's.

He told senators about the "vulnerability of space" and how the U.S. must be prepared to respond to any kind of attack. And he went on to talk like the engineer he is about the need for "large scale systems engineering" and an "architecture" to make sure the U.S. is dominant in the space realm.

"There will be a double-digit increase," Shanahan said, to Pentagon "investments in both space and cyber, modernization of our nuclear triad and missile defense capabilities."

Pentagon officials familiar with the internal debate say Shanahan clashed with Air Force Secretary Heather Wilson — who was also mentioned as a potential defense secretary candidate — over the Space Force, believing she was undermining the plan or was pushing to keep it within the Air Force as opposed to creating a separate military service.

Wilson recently announced her resignation to become president of the University of Texas, El Paso.

One potential hurdle for Shanahan at a Senate confirmation hearing could revolve around his previous job at Boeing and questions about whether as a defense official he was promoting Boeing products over rival Lockheed Martin. Some Republicans on the committee are reportedly concerned about his strong corporate ties.

The government watchdog group Citizens for Responsibility and Ethics in Washington has asked the Pentagon's inspector general to investigate the issue. It involves a Pentagon decision to buy more Boeing-made F-15X aircraft, even though the Air Force did not request them.

The complaint alleges that Shanahan "made numerous statements promoting his former employer Boeing and has disparaged the company's competitors before subordinates at the agency."

"Secretary Shanahan has at all times remained committed to complying with his ethics agreement, which screens Boeing matters to other DOD officials and ensures no conflict of interest."