Accessibility links
In 'Upheaval,' Jared Diamond Examines Crisis Resolution Through A Personal Lens The Pulitzer prize-winning author draws from history and psychology, theorizing that nations in crisis can learn from the experiences of people in crisis — and looks for a path forward for the U.S. 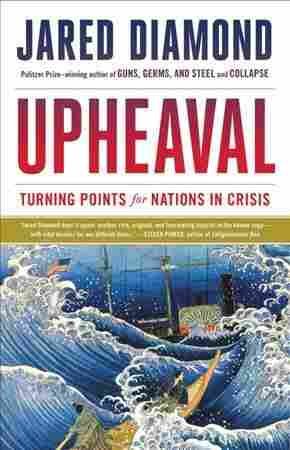 Turning Points for Nations in Crisis

If the past nine years have had you feeling on edge, Jared Diamond has good news and bad news for you.

The bad news, which we'll get to later, is that things could, and might, get a whole lot worse unless the nation goes through some serious changes. Diamond, whose popular book Guns, Germs, and Steel won the author a Pulitzer Prize, doesn't appear to have the highest of hopes for the fate of the U.S., but that's no reason to skip Upheaval, his fascinating look at how countries have dealt with nationwide crises, and what we might be able to learn from them.

The idea behind Upheaval is a captivating one that draws from both history and psychology. Diamond theorizes that nations in crisis can learn from the experiences of people in crisis, and the therapies that have been used to treat them. "There is a large body of research and anecdotal information, built up by therapists, about the resolution of personal crises," he writes. "Could the resulting conclusions help us understand the resolution of national crises?"

He lists 12 factors related to the success of people in navigating their own life upheavals, and adapts them to apply to nations. Some of these include "national consensus that one's nation is in crisis"; "honest national self-appraisal" and "situation-specific national flexibility." In the following chapters, he looks at several nations who have dealt with their own crises to varying degrees of success, including Japan, Indonesia, Finland and Germany.

Perhaps most interesting — and chilling — is Diamond's chapter on Chile, a country with "a long history of democratic government" until 1973, when its government was seized by its armed forces in a coup. Diamond writes that the coup was the result of "increasing polarization, violence, and breakdown of political compromise." That might sound familiar to you, and it certainly does to Diamond.

"Despite Chile's strong democratic traditions, Chile's political polarization and breakdown of compromise culminated in violence and a dictatorship that few Chileans had foreseen. Could that happen in the U.S.?" he asks. "Yes, the U.S. is indeed different from Chile. Some of those differences, reduce, and some of them increase, the risk of an end of democracy in the U.S. If democracy does end in the U.S., it won't be through an uprising led by the heads of the armed forces; there are other ways to end democracy."

Toward the end of the book, Diamond takes a look at what crises the United States, and the world in general, might be forced to reckon with in the coming years. All nations are facing crises involving nuclear weapons, inequality and climate change, he writes, while the U.S. must deal with our issues of "political polarization, low voter turnout, obstacles to voter registration, inequality, limited socio-economic mobility, and decreasing government investment in public goods."

Although its subject matter is intrinsically distressing, Upheaval is not a gloomy or pessimistic book. Diamond is neither a cheerleader who promises that America, because it's somehow special, is incapable of dying, nor a doomsayer who's thrown up his hands and declared the inevitable end of the republic. While the country might be headed to a spot behind the eight ball, he writes, deliverance is possible if Americans don't give in to denial. He argues that Americans should develop "the sense that something important about one's current approach to life isn't working, and that one has to find a new approach."

Diamond is an endlessly engaging writer, and the experience of reading Upheaval is similar to taking a college course from a professor who's as charming as he is polymathic. He's gifted at explaining the context of various national crises, providing fascinating background information (and sometimes personal anecdotes) without ever getting distracted by tangents. Diamond has an impressive range of knowledge — he's an expert in a wide variety of fields, including physiology, geography and history, and his ability to draw from each of them in a way that makes sense to lay readers is extraordinary.

Anyone with an interest in history, psychology, or the future of the country will find much to admire in Upheaval, and Diamond's take on how our nation might navigate its path forward is fascinating reading for anyone anxious about the state of the republic today. "There is no way that China or Mexico can destroy the U.S," he writes, but then warns: "Only we Americans can destroy ourselves."