Accessibility links
'Remain In Mexico' Continues, While Lawyers And Migrants Face Challenges Immigrant advocates say the policy, known as Migrant Protection Protocols, is not protecting migrants. It is difficult for lawyers to reach clients and puts migrants in danger. 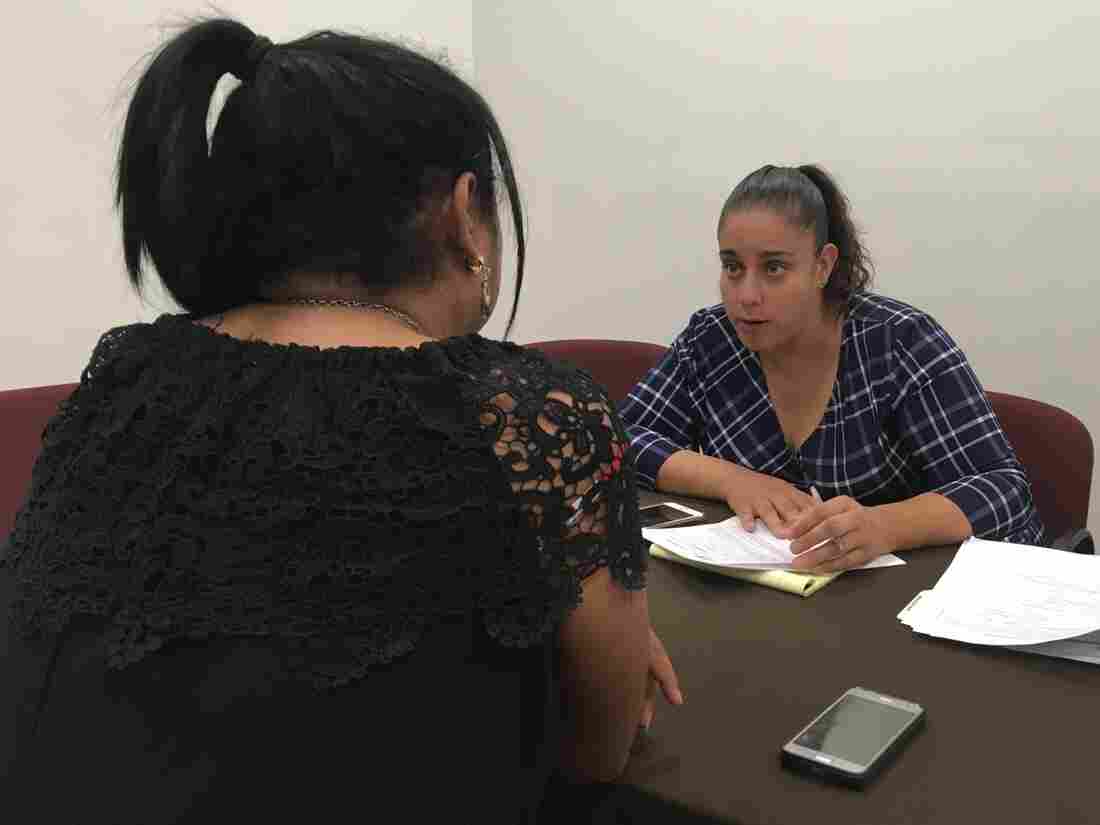 Attorney Linda Rivas (right) with the nonprofit Las Americas of El Paso meets with a transgender migrant woman sent back to Mexico as part of the Trump administration's "Remain in Mexico" policy. Monica Ortiz Uribe for NPR hide caption 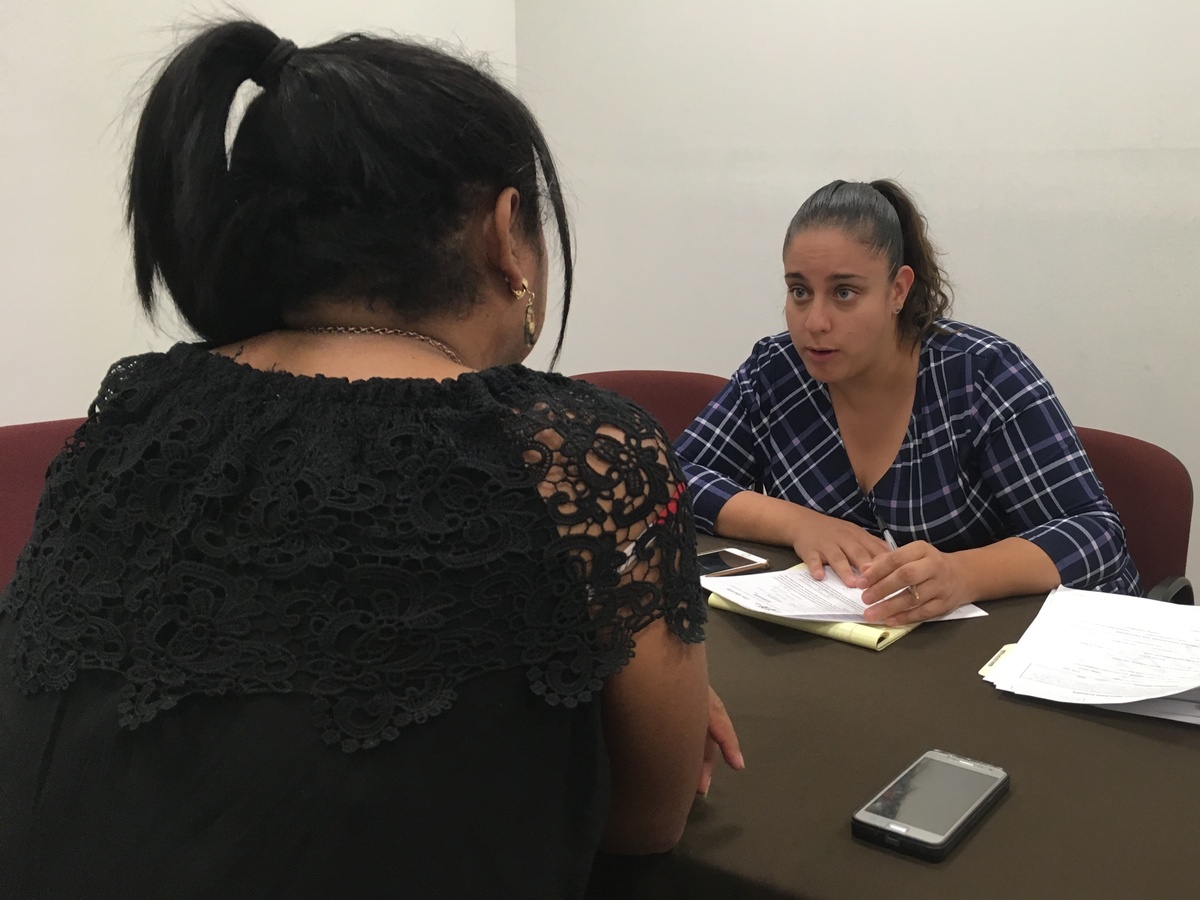 Attorney Linda Rivas (right) with the nonprofit Las Americas of El Paso meets with a transgender migrant woman sent back to Mexico as part of the Trump administration's "Remain in Mexico" policy.

A federal appeals court this week ruled that a Trump administration program that sends asylum-seekers back to Mexico may continue pending a final decision on a lawsuit that seeks to eliminate the program entirely.

The decision angered immigrant advocates, who say the policy, officially known as Migrant Protection Protocols, is having the opposite effect of what its name would suggest.

For the Trump administration, the ruling is a temporary victory for its hard-line enforcement strategy, which seeks to curb mass migration at the Southern border. According to figures provided by the Mexican government, close to 5,000 migrants have been sent back to that country since the MPP program began.

The Department of Homeland Security bills MPP as a way to clamp down on foreigners trying to game the U.S. immigration system. It comes at a time when a crush of Central American families has overwhelmed officials at and in between ports of entry. In April, border authorities stopped 109,144 migrants attempting to enter the U.S. without standard documentation. That's the highest monthly total this year and more than double the number of apprehensions in April of last year.

Acting DHS Secretary Kevin McAleenan defended the "Remain in Mexico" policy before Congress last month. "It allows us to take more people in at ports of entry who are presenting asylum claims because we can process them without the limitations in our capacity," he said.

On paper, DHS states that "vulnerable populations" may be excluded from MPP on a case-by-case basis and that Mexico will provide appropriate humanitarian care for those who are sent back. It also assures migrants that they will have access to legal help while in Mexico. But in reality, these claims aren't playing out so neatly.

On a recent morning Ivonne Ruiz made an unusual workday commute, trudging up the international bridge on foot toward Juárez, Mexico. She works for Las Americas, a small nonprofit in El Paso, Texas, specializing in immigration law. A month ago the MPP program, which originally began in January in California, expanded to include these sister cities along the west Texas border. Las Americas is one of six low-cost or pro bono legal offices listed on a handout given to migrants in court.

A lot of private-practice attorneys aren't touching [MPP] cases. Quite honestly, they would have to charge a fee that's just not able to justify their time out of office.

"We're literally having to go across the border to be able to provide intakes, consultations with people and see what we can do," Ruiz said. "[It's] something completely different, completely new. We never had to experience that before."

She crosses on foot hoping to avoid long wait times back into the States. Border crossers traveling by car report queues lasting up to four hours. Numerous resources, including customs officers who staff the ports of entry, have been redirected to help process the influx of families.

"A lot of private-practice attorneys aren't touching [MPP] cases," said attorney Imelda Maynard with Catholic Charities. "Quite honestly, they would have to charge a fee that's just not able to justify their time out of office."

In a borrowed office space in Juárez, a Honduran woman shared her story with one willing American attorney. Tears slid down the woman's cheeks as she pulled copies of police reports and news articles from a plastic grocery bag. She said she was targeted by gangs for testifying in court as a witness to her mother's murder.

The woman fled with her three young children in early April. They turned themselves in to U.S. authorities at the border in El Paso and were sent back to Mexico.

"This is an absolutely good, viable claim," said Linda Rivas, an attorney with Las Americas, who examined the case. "We would need several hours of legal work to ensure success in this case."

Initial hearings for migrants in El Paso's MPP court are scheduled as far out as November. In the interim, migrants — many who have relatives in the U.S. who can host them — have to compete for space at 12 Juárez shelters, all of which are at capacity.

Aide workers report women and children sleeping on the streets in Juárez. Getting court notices mailed to migrants without a fixed address is one of several challenges the MPP program has yet to sort out. Asylum-seekers in the U.S. are eligible for a work permit after six months. In Mexico that's not guaranteed, making it difficult for families to support themselves.

Violence is also a major concern. In Juárez this year there have been close to 500 homicides, a rising figure not seen since a deadly drug war a decade ago. Last Friday, a local newspaper reported three people carrying Honduran IDs were murdered.

Rivas has represented two migrant fathers who testified in court about being kidnapped and robbed in Juárez.

"There is no special funding for us to continue to do this work," she said. "As we continue to hear the numbers keep growing, we don't know how long we'll be able to do this."