Accessibility links
The Boston Red Sox Honored At White House Ceremony The 2018 World Series Champion Red Sox were honored at a White House ceremony on Thursday. Most players of color stayed away, leading one sportswriter to comment, "its the white Sox who'll be going."

With Some Players Bowing Out, Trump Hosts Red Sox At The White House

With Some Players Bowing Out, Trump Hosts Red Sox At The White House 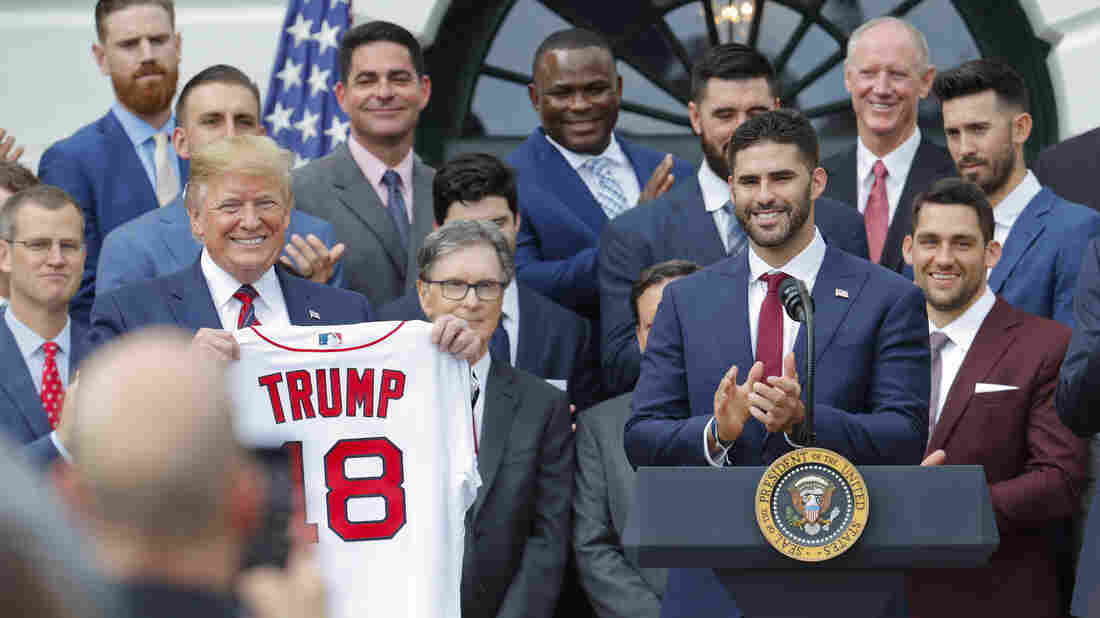 President Trump holds up a Red Sox team jersey that was presented to him by outfielder J.D. Martinez Thursday at the White House. Pablo Martinez Monsivais/AP hide caption 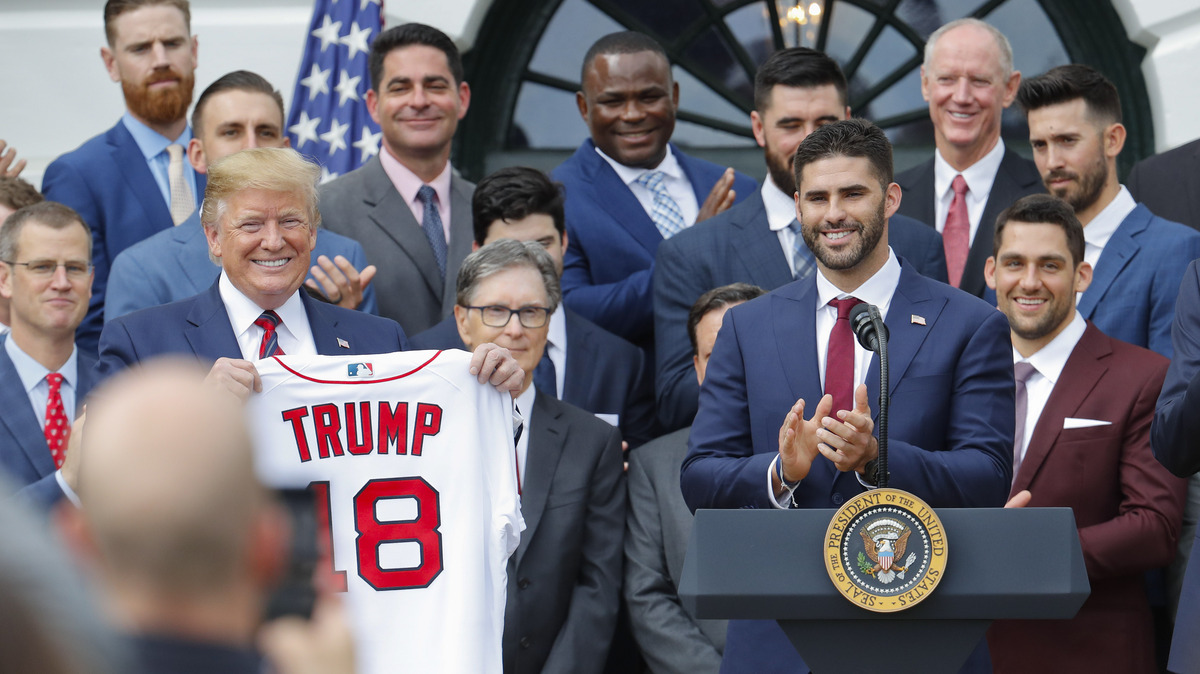 President Trump holds up a Red Sox team jersey that was presented to him by outfielder J.D. Martinez Thursday at the White House.

President Trump honored the 2018 World Series Champion Boston Red Sox at a White House ceremony Thursday, lauding the team as a "shining example of excellence" in "an American sporting tradition that goes back many generations."

But the tradition of an apolitical White House celebration has become something of a thing of the past, with the invitation from Trump becoming more of a loaded loyalty test, forcing players to pick sides. Roughly a third of the team skipped the event in protest.

The day began with many mocking the White House for its online gaffe welcoming the "Boston Red Socks."

"I need you to go to a store there in Boston and buy a package of red socks. Yes, that's right, red ones. Well the Sox aren't going to make it to the White House so I thought the President could welcome some actual red socks." https://t.co/lrIdi7Dj35

But the Sox are having their own awkward moment, as those who attended the White House celebration, and those who passed, are divided almost perfectly along racial lines. Every white player went, while almost every person of color who wears a Sox uniform opted out, including Mookie Betts, Jackie Bradley Jr., Xander Bogaerts and David Price.

Manager Alex Cora says it was the Trump administration's position on hurricane relief to his native Puerto Rico that was keeping him away, according to the English online version of the Puerto Rican newspaper El Nuevo Día.

"I've used my voice on many occasions so that Puerto Ricans are not forgotten," Cora told the paper. "And my absence [from the White House] is no different. As such, at this moment, I don't feel comfortable celebrating in the White House." 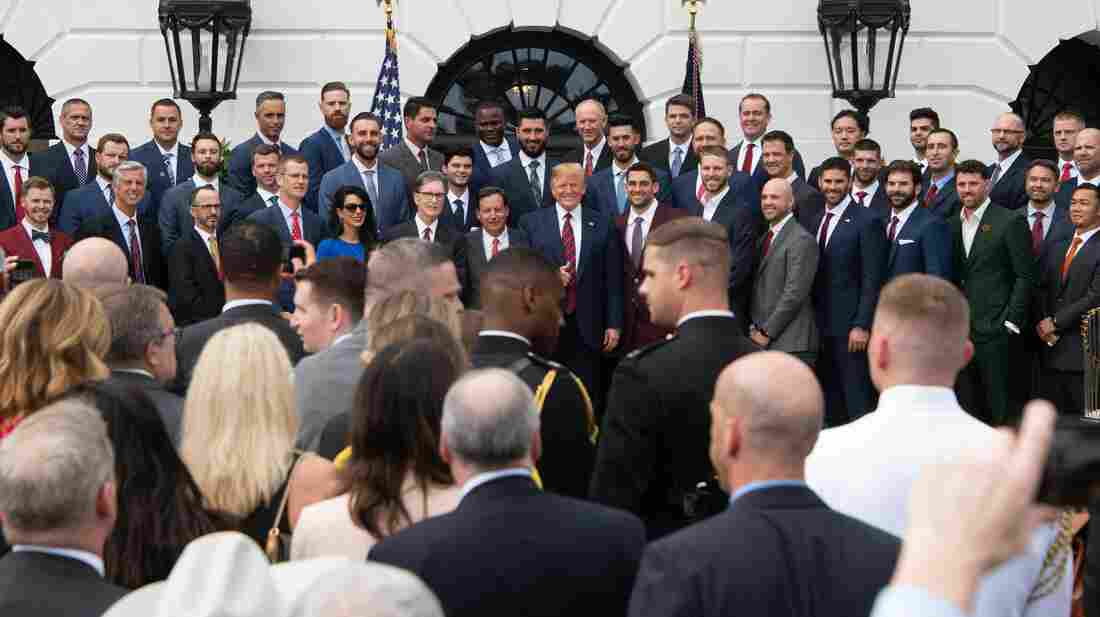 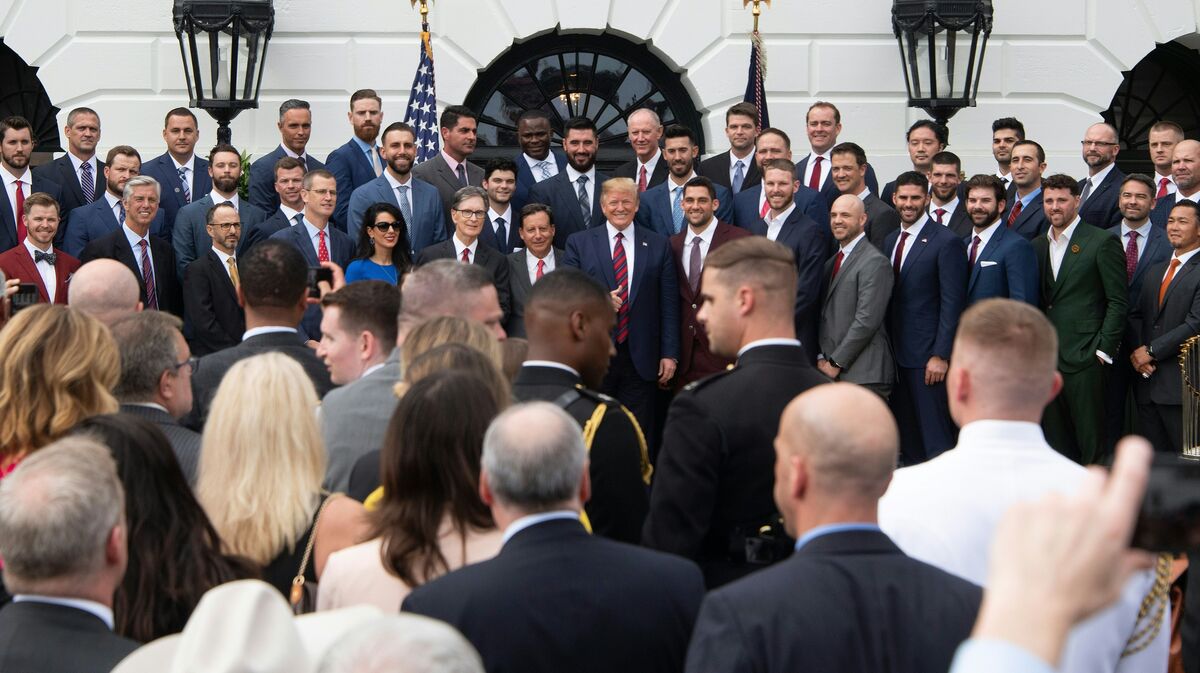 The Red Sox players are hardly the first to stay home to protest the Trump administration. But it comes as the ball club has been making great efforts to live down its reputation as a racist organization, a legacy that owner John Henry has said has "haunted" the team. Last year, the team successfully fought to change the name of Yawkey Street alongside Fenway Park to distance the team from its late former owner Tom Yawkey, who was known as much for his historically racist ball club as he was for his great philanthropy.

The team's current owners have also launched a program promoting inclusion called "Take the Lead," and they have taken a zero-tolerance stance against racist fans, banning offenders for life. Red Sox CEO Sam Kennedy says the team didn't want to make a political statement by snubbing the White House. But many say the Sox split decision is another kind of statement.

"It's basically the white Sox who'll be going," as one local sportswriter put it.

Alex Cora has confirmed newspaper report he will not make the trip to meet the president. So basically it’s the white Sox who’ll be going.

Many fans cringed at the optics and the message, tweeting "shame on you all" and calling out the players who went for not staying back in solidarity with their teammates.

The players who did attend beamed beside the president, as he praised their winning season. Red Sox starting pitcher Chris Sale called it "a very high honor ... that we appreciate."

Good for him! And shame on his disgusting teammates. Much love for JBJ and every @RedSox player who stands in solidarity with him and stays home https://t.co/dfqluQd312

Outfielder J.D. Martinez, of Cuban descent, was the only person of color to attend. He thanked the president for his hospitality and for "a once-in-a-lifetime opportunity to be honored ... at the White House."

The team has been trying to downplay any tensions in the clubhouse, and many players have declined to discuss their decisions. But former player David Ortiz was less circumspect, telling WEEI sports radio he would have definitely skipped the event, which he compared to "shak[ing] hands with the enemy."

"I'm an immigrant," said Ortiz, who became a U.S. citizen after arriving from the Dominican Republic. "You don't want to go and shake hands with a guy who is treating immigrants like [expletive]."