Accessibility links
Maria Butina Says She Was A 'Peace-Builder.' That's Not How The Feds See It The Russian agent gave an interview to NPR from the detention center where she has been in custody since last summer. She denies being a spy or taking part in election interference. 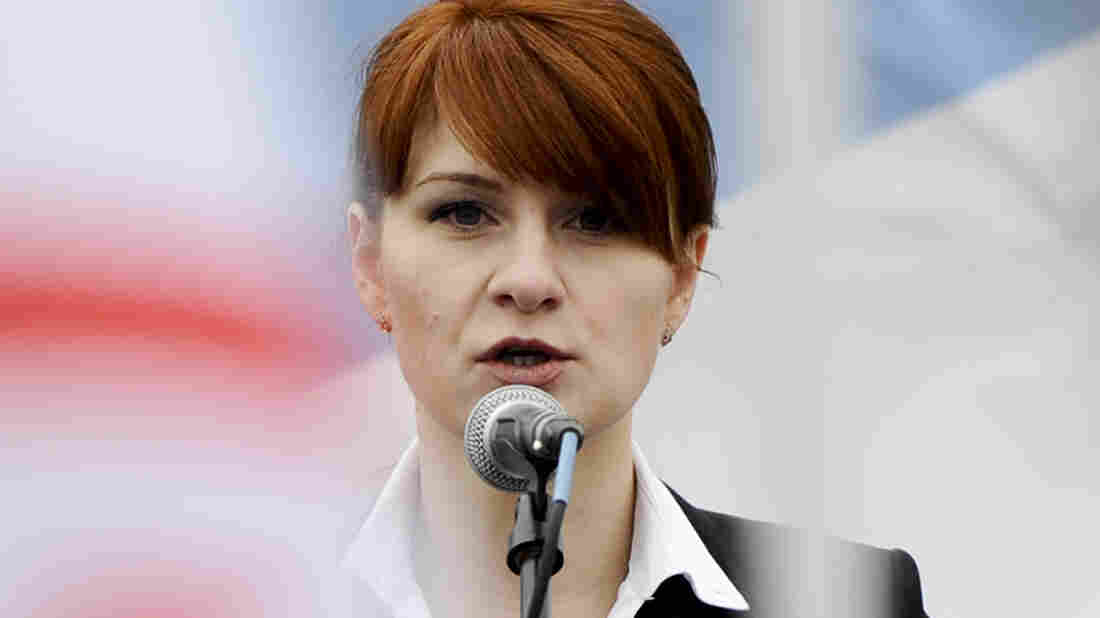 Maria Butina advocates for gun rights in Russia in 2013. Now sentenced to prison, she denies she had any intelligence assignment in the United States. AP hide caption 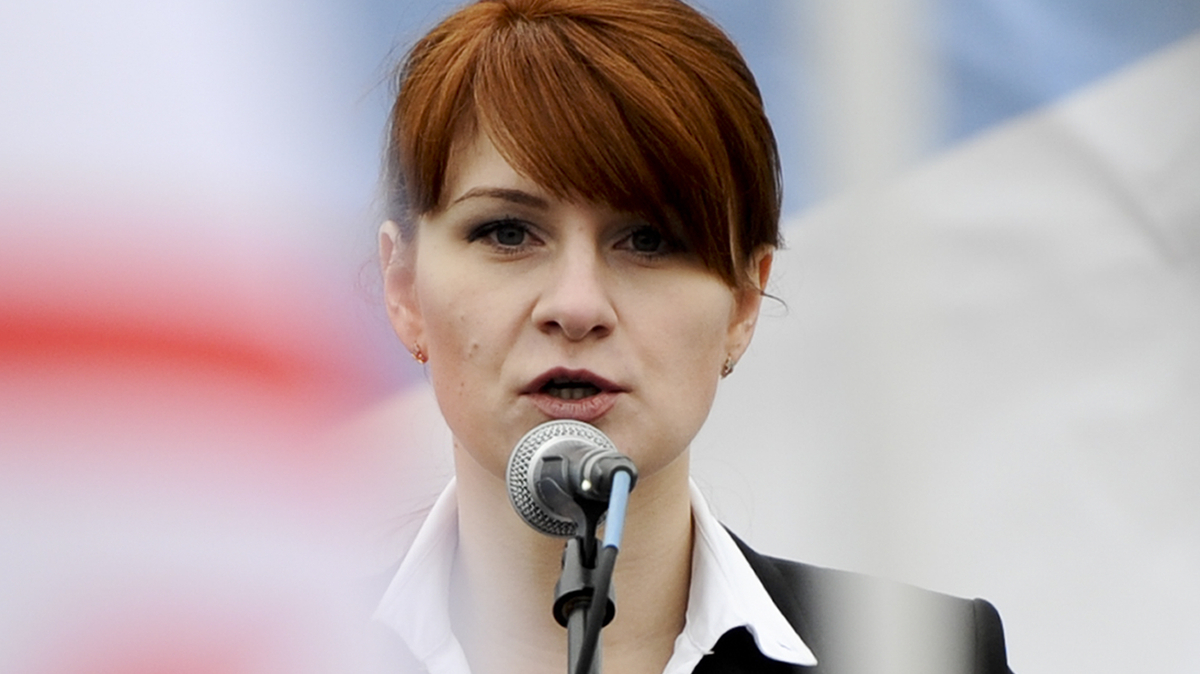 Maria Butina advocates for gun rights in Russia in 2013. Now sentenced to prison, she denies she had any intelligence assignment in the United States.

Maria Butina says this is all a big misunderstanding.

Was she part of the vast Russian government effort to influence politics within the United States?

"Absolutely not," she said.

The Russian woman who has pleaded guilty to conspiring to serve as a foreign agent inside the United States says she simply didn't know she was supposed to register.

As for being an intelligence operative, an agent provocateur or any of the other things of which she has been accused, Butina said those accusing her don't know her.

"It wouldn't be appropriate to say that this was all one grand giant plan and I'm a part of some grand giant plan," she said Thursday. "There is no proof of that. And I have no knowledge that there is a certain plan."

Butina spoke to NPR by phone in an exclusive interview from the detention center outside Washington, D.C., where she has been in custody since her arrest last summer.

She pointed out that she isn't mentioned in the redacted version of the report by special counsel Robert Mueller and said that she doesn't know anything about election interference beyond what she has seen in the press.

All she wanted, Butina said, was to be a "peace-builder" between Russia and the United States.

"I never hide my love to my motherland neither to this country ... I love both countries, and I was building peace."

The U.S. government has a different take on all this.

It says that Butina, even if she didn't set out to become one, wound up as a de facto intelligence asset, not only seeking to build clandestine connections between Russia's regime and influential Americans but also identifying potential subjects for follow-up by other spies.

Intelligence officers call it "spotting and assessing," and it can be nearly as important to espionage as actually stealing secret information — identifying who has it and who might be a good candidate for more attention from spies.

"Acquiring information valuable to a foreign power does not necessarily involve collecting classified documents or engaging in cloak-and-dagger activities," Justice Department prosecutors wrote before Butina was sentenced to 18 months in prison.

"Something as basic as the identification of people who have the ability to influence policy in a foreign power's favor is extremely attractive to those powers. This identification could form the basis of other forms of intelligence operations, or targeting, in the future."

In 2010, the FBI ejected a whole network of spies who had burrowed into American life seeking to identify suitable targets for recruitment. In that case, Russia's foreign intelligence service, the SVR, was responsible for deploying and running the network.

Butina was asked specifically whether she was part of a spot-and-assess effort, and she said she was not: "It feels for me that this is ... possibly a speculation which has no evidence."

Butina acknowledged working with her now-sanctioned mentor, Russian politician Alexander Torshin, but she denied that he "controlled" her or that he had an intelligence role.

Yes, Butina did send notes home to Torshin about what she was doing, she said, but she didn't know where the information she provided wound up, or whether it was any value to Russian leaders.

Yes, Butina said, she sought meetings with U.S. officials, conservative political leaders and others, but some of them were so unimportant that she couldn't remember the details and generally, she said, her aim was to build bridges between the United States and Russia.

"I believe that we should have peace between the two countries," she said.

"It has been my goal all the way. ... I believe that the relationships and their strength ... depends on people, depends on what they call civil diplomacy. On people who have similar interests. Similar hobbies. Similar minds, like people who, let's say ... who are Christians who share the faith — or people who share love to guns. That's exactly the point that I was addressing. I was building unofficial communication of civil diplomacy."

Guns were an important source of common ground in Butina's work.

Butina's boyfriend, Paul Erickson, emailed leaders on Donald Trump's presidential campaign in the spring of 2016 offering to serve as a back channel between them and Moscow via the National Rifle Association — a bridge that ultimately did not lead anywhere.

The clandestine nature of that outreach, however, was apparent all along to Butina and her mentor and handler. At one point, Torshin sent her a message likening her to one of the "illegals" who had been kicked out years before — the woman who has become known as Anna Chapman.

And when Butina attended Trump's inauguration, Torshin sent her a message hailing her as a "daredevil girl."

In her interview on Thursday, Butina acknowledged a note that investigators have discovered making references to Russia's intelligence service, the FSB. She said the reason she and Erickson had it was to anticipate any questions upon her return to Russia.

What if her "peace building" had been successful and the FSB asked her about it, she said.

"This is kind of a question that you don't ... ignore," Butina said. "So how do you respond to this question?"

Erickson is facing federal investment fraud allegations in his home state of South Dakota but has not been charged with any crime related to Butina or their political projects. He has pleaded not guilty in the South Dakota case, and his attorneys say he has done nothing wrong.

Meanwhile, Russia's government has been supporting Butina since her arrest.

Consular officials visited her in jail — which she said came as a surprise — and the Russian Ministry of Foreign Affairs turned her into a cause célèbre in its official channels.

Russian officials have also taken an American, Paul Whelan, into custody and have accused him of spying in a case that drew speculation that it might be a tit-for-tat response to Butina's arrest.

Discussion for a time centered on the idea that the Russian government might want to have an American to exchange for Butina when the time comes for her to be released and return home, although it still isn't clear whether an exchange may happen.

Whelan remains in custody in Russia.

Butina is on the verge of moving from her cell outside Washington, D.C., to a federal prison, where she will serve roughly nine more months, and then is expected to be deported.

The time in custody doesn't bother her as much as the stir caused by her story, she said.

"I am embarrassed that instead of creating peace, by not registering I created discord — that is what I'm going to carry for the whole my life," Butina said. "This is what makes me most upset, not the 18 months that I got, though it's painful for my family."

When Butina returns to Russia, she said, she'll go back to Siberia, where she grew up, and try to become a professor, although it isn't clear now what will happen when she arrives.

"I will probably need a sabbatical," she said, because the past few years "have been a pretty colorful emotional experience."