Accessibility links
Alabama Senate Postpones Vote On Nation's Strictest Abortion Ban Shouting broke out on the floor when a rape and incest exemption was removed without a roll call vote. "I want the people of the state of Alabama to know how we vote," said a Democratic state senator. 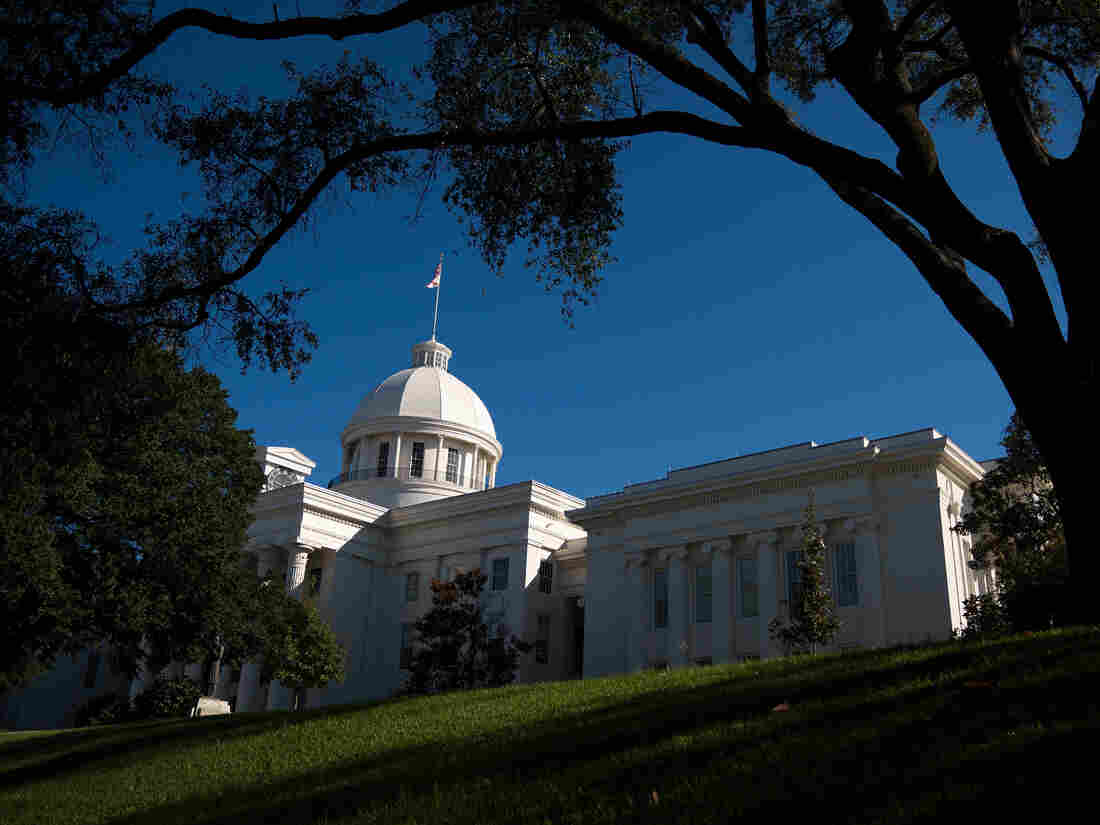 The Alabama Senate postponed a vote on a highly restrictive abortion bill after controversy over an amendment that would provide an exception in cases of rape or incest. Drew Angerer/Getty Images hide caption 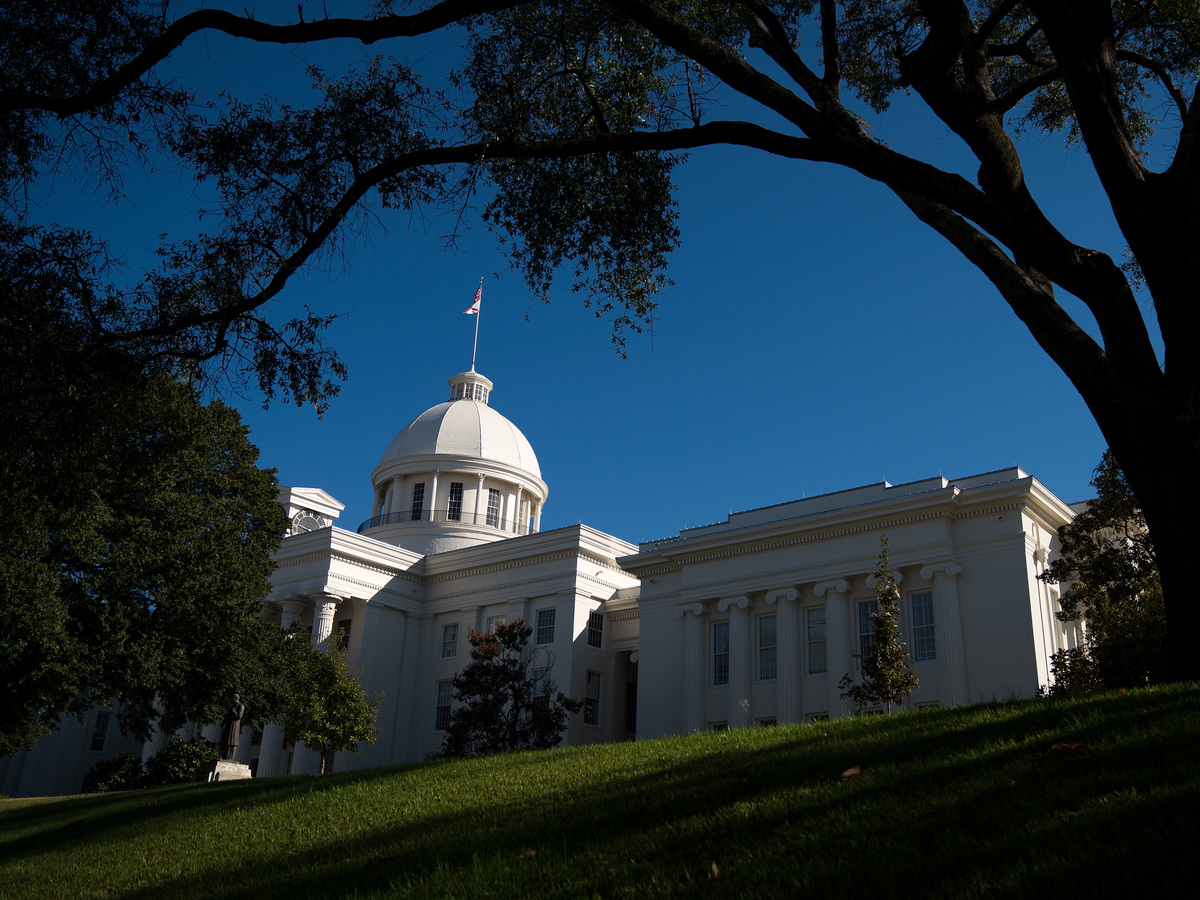 The Alabama Senate postponed a vote on a highly restrictive abortion bill after controversy over an amendment that would provide an exception in cases of rape or incest.

A vote on what would be the country's most restrictive abortion ban was postponed in the Alabama Senate on Thursday after chaos erupted over the stripping of an amendment to allow exceptions in the case of rape or incest.

Shouting broke out on the Senate floor when the rape and incest exemption was removed without a roll call vote. Troy Public Radio's Kyle Gassiott reports from Montgomery: "Democrats loudly challenged Republicans, saying blocking the amendment violates Senate rules. ... These exceptions were added by the Senate Judiciary Committee over the objections of the bill's sponsor, who proposed it with the eventual goal of challenging Roe v. Wade in the U.S. Supreme Court."

TAKE A LOOK: Lawmakers were discussing this bill that would have banned nearly all abortions. The Senate removed an amendment that added exceptions in cases of rape and incest. Right after a quick voice vote to strip the amendment chaos broke out. pic.twitter.com/rygpucN0s2

Democrats and some Republicans objected to the amendment being tabled so hastily.

"You've got 27 men over on the other side ready to tell women what they can do with their bodies," Democratic Sen. Bobby Singleton said, according to The Associated Press. "You don't have to procedurally just try to railroad us."

Republican Sen. Cam Ward agreed that there was no need to hurry. "If we're going to debate this issue in a serious manner that it should be debated, I will stand here and ask all of you to go bring your lunch, and your dinner, and your breakfast in," he said. "I am not going to move until we get a fair procedure in this process."

Democrats want a roll call vote so there is a record of the Republican lawmakers who support a bill without exceptions for women who were raped.

"I want the people of the state of Alabama to know how we vote," Singleton said, according to The Washington Post. "I think the people have a right."

Alabama's House passed the bill last week. As NPR's Debbie Elliott reported, the House version would mean a near-total ban on abortion: "The bill criminalizes abortion, meaning doctors would face felony jail time up to 99 years if convicted. The only exceptions are for a serious health risk to the pregnant woman, or a lethal anomaly of the fetus. There are no exceptions for cases of rape or incest. A woman would not be held criminally liable for having an abortion."

The bill is meant to force a challenge to Roe v. Wade, the landmark 1973 ruling that made abortion legal nationwide. In a statement following Thursday's uproar, Lt. Gov. Will Ainsworth makes that clear:

"It's important that we pass this statewide abortion ban legislation and begin a long overdue effort to directly challenge Roe v. Wade. ... Now that President Donald Trump has supercharged the effort to remake the federal court system by appointing conservative jurists who will strictly interpret the Constitution, I feel confident that the U.S. Supreme Court will overturn Roe and finally correct its 46-year-old mistake."

Alabama is among more than two dozen states seeking to restrict abortion rights this year, testing federal legal precedent that prevents states from banning abortion before the point at which a fetus could survive outside the womb. Mississippi, Ohio and Georgia have all recently passed legislation that bans abortions after a fetal heartbeat is detected, in about the sixth week of pregnancy. Federal judges in Kentucky and Iowa have blocked the laws or struck them down as unconstitutional.

The AP notes that state Rep. Terri Collins, the bill's sponsor, argued against any exceptions for rape or incest, "saying any exceptions could hurt the goal of creating a court case to weigh whether embryos and fetuses are people with rights of personhood. She has argued that lawmakers could come back and add exemptions if states regain control of abortion access."

Debate on the bill will reopen Tuesday, and it's expected to pass in the Senate and be signed into law by Gov. Kay Ivey, a Republican.

The ACLU of Alabama says it will sue if the abortion ban becomes law: "Passing bills that they know will be struck down in federal court are a waste of millions of taxpayer dollars that could be going to address the urgent needs in our communities, like schools, healthcare, infrastructure, prisons and so much more. ... If the full Senate and Governor insist on passing this bill, they will see us in court."