Accessibility links
Palestinian Artists Call For Eurovision Boycott; Israel Responds With PR Campaign The Eurovision Song Contest starts next week in Tel Aviv. A cultural collective in Gaza is calling for a boycott of the competition; Israel has responded with PR videos and a "BDS" website of its own. 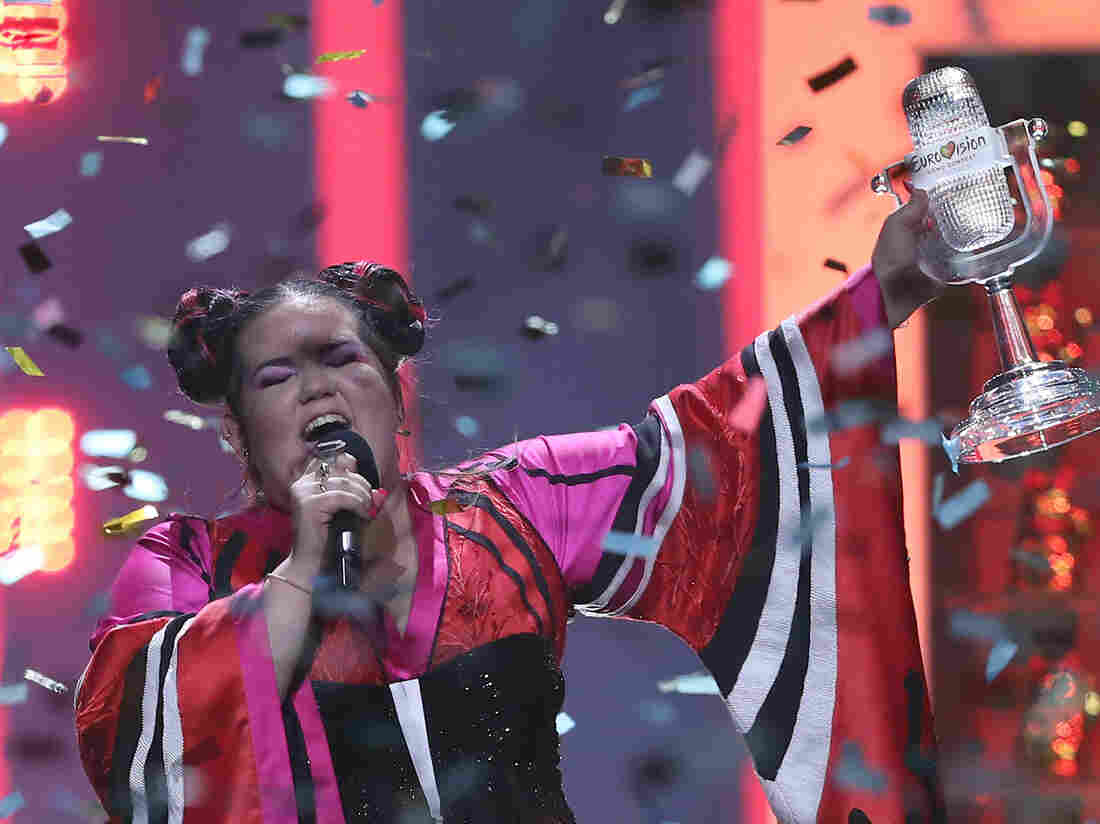 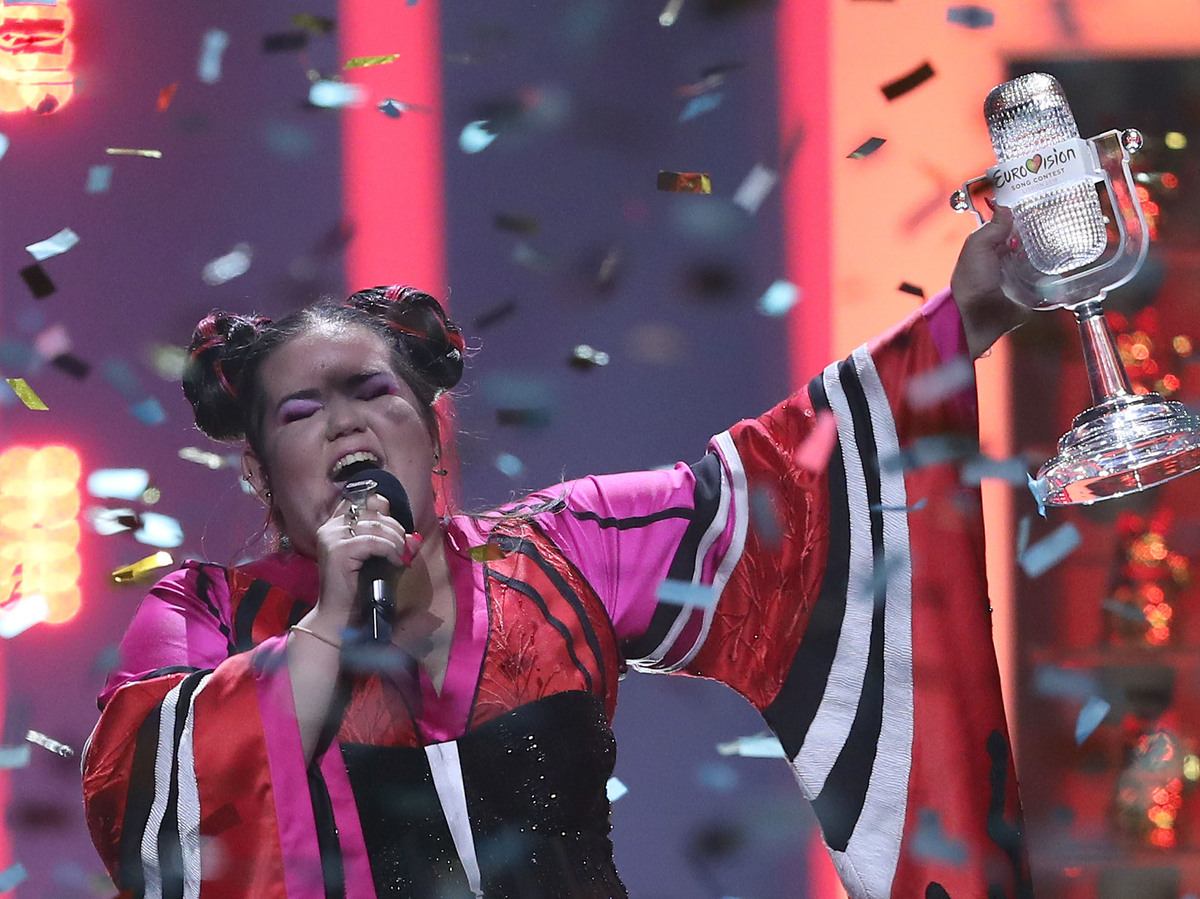 Israeli singer Netta performs after winning the 2018 Eurovision Song Contest in Lisbon, Portugal, in May 2018.

In an open letter published Thursday, a group of over 30 Palestinian cultural centers and organizations from Gaza called for a global boycott of the Eurovision Song Contest, the enduringly popular international singing competition that will be held May 14 to 18 in Tel Aviv, Israel.

"Even when Israel bombs us, imprisons our men, women and children, kills and maims thousands of Palestinian protesters ... and does everything to silence our voices, we will continue to sing. We ask for people of conscience around the world to heed our call for boycott, divestment and sanctions of Apartheid Israel just as they did to help bring down Apartheid in South Africa," the group writes.

The letter writers in Gaza also point to many musicians from outside the Middle East who have declined to perform in Israel, including Lorde, Lana Del Rey, Roger Waters, Annie Lennox, and Brian Eno, who wrote an opinion piece for The Guardian about boycotting Eurovision. (There are also many international artists who have happily toured Israel, including Radiohead, Madonna, Nick Cave and Metallica.)

The Palestinian artists' call comes following a fresh torrent of violence between Israel and Gaza. Israel's prime minister, Benjamin Netanyahu, ordered "massive strikes" against Gaza militants, including Hamas and Islamic Jihad targets, last Sunday; the BBC reported that according to the Israel Defense Forces, groups in Gaza launched nearly 700 rockets and mortars at Israel last weekend. Israel accused the militant group Islamic Jihad of instigating the violence after saying the group shot and wounded two Israeli military officers on May 3.

NPR correspondent Daniel Estrin reported for All Things Considered on Thursday that, among the roughly 2 million people living in the Gaza Strip, unemployment is now over 50 percent, and many Palestinians are fleeing abroad.

Israel has responded indirectly to the calls for a Eurovision boycott with a PR campaign that specifically targets people who may be curious about or sympathetic to the movement to boycott, divest from and sanction Israel, known as BDS. For example, visitors to the recently launched website BoycottEurovision.net are greeted with the headline "Welcome to the true story of BDS: Beautiful, Diverse, Sensational Israel." Israel's Ministry of Strategic Affairs and Public Diplomacy confirmed to Reuters on Friday that it was responsible for the site. The news wire also reported that Google searches using words like "boycott" and "Eurovision" were linking to ads to the ministry's site, through search engine optimization.

In a Eurovision teaser video released Thursday by Israel's KAN Broadcasting Corporation (the public, state-broadcast network, which is also carrying the singing contest), the two main performers — a man who introduces himself as Russian Jewish and the other a half-Jewish, half-Israeli Arab woman named Lucy Ayoub, one of the Eurovision hosts this year — sing to a pair of befuddled tourists: "I know just what you heard, that it's a land of war and occupation / But we're so much more than that. You'll see the prices and say, 'What?!' "

Per Eurovision tradition, Israel won the opportunity to host this year's contest after a singer from the country, Netta, won the 2018 edition with her campy tune "Toy."

This is not the first time that Eurovision's glitter has gotten swept up in geopolitics. Before the 2017 contest, held in Ukraine, Russia announced it would not broadcast the competition after the host country asserted that Russia's entrant, a singer named Yuliya Samoylova, would not be allowed to enter Ukraine, because she had previously toured Crimea. Russia annexed Crimea from Ukraine in 2014.

In 2015, Armenia's team sent the song "Face the Shadow" to the competition. It was interpreted as a criticism of the government of Turkey, which has continually rejected Armenians' claims that the atrocities of 1915 — in which as many as 1.5 million Armenians were killed or deported in a wave of violence spurred by Ottoman Turks — were a genocide against their people.

Worldwide, the Eurovision finals broadcasts continue to be a huge draw. They are broadcast in over four dozen countries, and the organizers anticipate that the global audience will be about 200 million viewers in 2019.