Accessibility links
NPR Review: 'With The Fire On High,' By Elizabeth Acevedo Elizabeth Acevedo follows up her National Book Award-winning The Poet X with this story of a young woman juggling high school, single motherhood, and work while dreaming of becoming a chef.

'With The Fire On High' Cooks Up A Powerful Message

'With The Fire On High' Cooks Up A Powerful Message 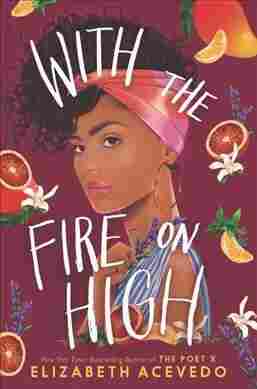 With the Fire on High

Title
With the Fire on High
Author
Elizabeth Acevedo

In With the Fire on High, Elizabeth Acevedo's follow-up to her National Book Award winning debut, The Poet X, she explores a different kind of creative talent through the story of a teenage girl, Emoni Santiago, who many would foolishly dismiss as a classic cautionary tale.

Emoni got pregnant her freshman year of high school, and now that she's a senior, she has to juggle parenting her Babygirl with passing her classes and holding down a fast-food job to take some of the pressure off her grandmother, whom she calls 'Buela, and who has raised Emoni since she was a baby herself. And even though all of that is enough for one person to handle, Emoni longs for something more.

Her true passion has always been cooking. In her hands, ingredients transform into something magical, transporting anyone who eats her food deep into their most precious memories. She has a rare talent, and everyone can taste it. But while she once dreamed of attending culinary school to nurture her skills and eventually working in a professional kitchen, Babygirl changed all that. Now Emoni's not sure that college is in the cards for her at all, let alone the fast-paced world of a professional chef — because how could anything be more important than being a good mother to her daughter?

It seems almost too good to be true when her high school announces a special cooking class. The students will get hands-on kitchen experience, culminating in a trip to Spain. Emoni probably doesn't have the time for an extra class, and she certainly doesn't have the money to go to Spain. But the thought of getting to learn from a real chef is too tempting to ignore, and Emoni decides to take a chance and invest in herself.

This book is boldly and gloriously subversive. In a world of after-school specials designed to scare teenagers into abstinence, With the Fire on High dares to make the assertion that it's possible to be a both a teen mother and a good mother. Emoni isn't perfect, but she bravely puts her Babygirl first and foremost while still pursuing her passions in life. That isn't to say that it looks fun or attractive — on the contrary, Emoni faces deep sacrifices to make her situation work, and there are times when she wonders how much easier her path would be if she only had herself to worry about. It's an open and honest representation of teen motherhood that shows its hardships and its joys without judgement.

It will also make you hungry. Unlike The Poet X, which was written in verse, With the Fire on High tells its story in straightforward prose. But the food feels like poetry. A different recipe introduces each section of the book, and Emoni is constantly cooking to understand her own feelings and to express them to the people around her. The description of each dish conveys the transportive quality of her cooking. I hesitate to call this magical realism because it feels more like straight-up realism, but the reactions that people have to Emoni's creations border on the supernatural.

In a world of after-school specials designed to scare teenagers into abstinence, 'With the Fire on High' dares to make the assertion that it's possible to be a both a teen mother and a good mother.

Food and love are so often entwined, both in fiction and in real life. Because of her mother's early death and her father's abandonment, Emoni struggles to feel worthy of love. She has her 'Buela and her best friend, Angelica, but has a hard time letting anyone else into the tight sphere that she's created to protect herself and Babygirl. It doesn't help that Babygirl's father has given her a less than stellar example of what it's like to have a boyfriend — to the point where it's hard for her to imagine wanting to love anyone romantically.

That makes it all the more moving when a boy in her cooking class steps up to court her. Their relationship feels like a real and honest teenage romance, from slightly awkward yet heady making out to navigating all the little boundaries that come with the territory. It's beautiful to watch as this gentle and tentative relationship helps Emoni open up her heart so that she can love herself enough to imagine a full and vibrant future.

I hope With the Fire on High finds a wide audience of teens and adults, who will all enjoy its candor, its hopefulness, and its delicious descriptions of food. But first and foremost, this is a love letter written for teens like Emoni, and its message is a powerful one: You can do this and thrive.

A previous version of this story identified Emoni's grandmother as Buela. It should be 'Buela, a shortened version of "Abuela," or grandmother.