Accessibility links
Ozzie Smith Plays 'Not My Job' On 'Wait Wait... Don't Tell Me!' We'll ask the Baseball Hall of Famer, known as "The Wizard" for his magical plays, to answer three questions about the 1939 movie The Wizard of Oz. 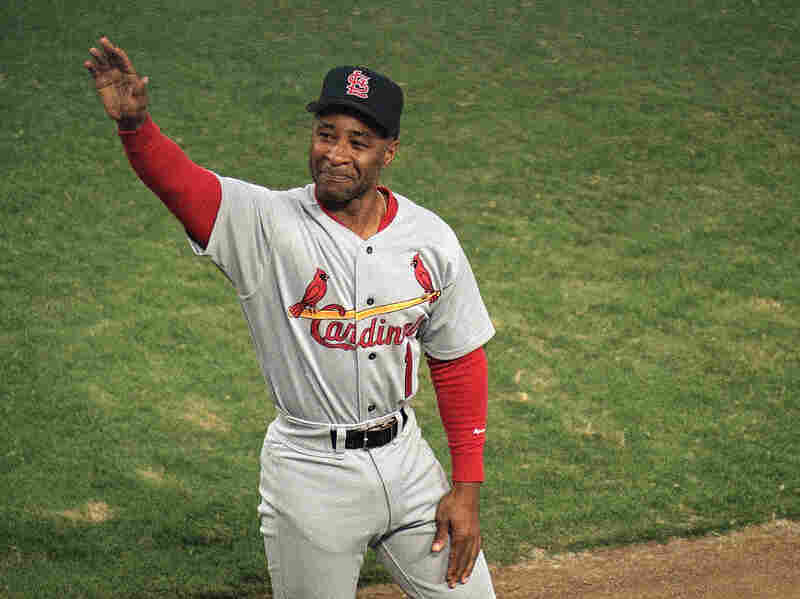 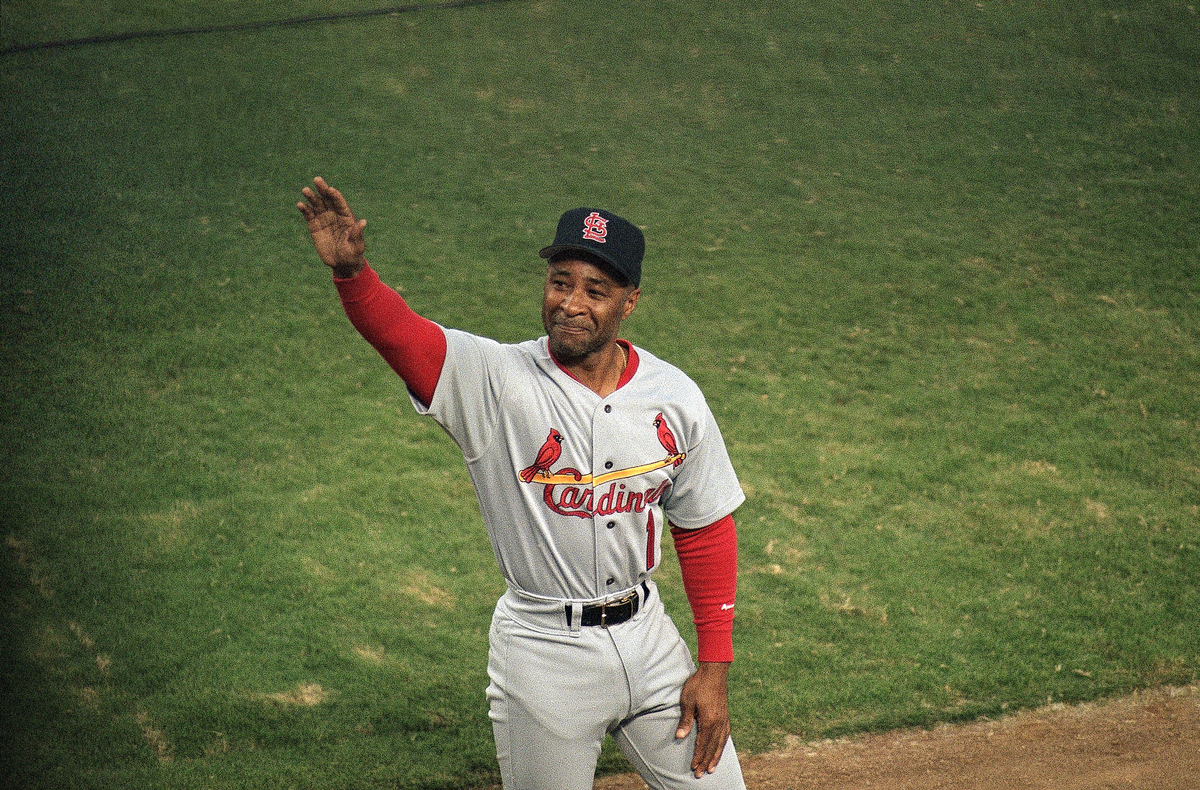 We recorded the show in St. Louis this week and invited former Cardinals shortstop Ozzie Smith to play our quiz. We'll ask the Baseball Hall of Famer, known as "The Wizard" for his magical plays, to answer three questions about the 1939 movie The Wizard of Oz.

And now the game where amazing people talk about pretty ordinary things - we call it Not My Job. Everybody in St. Louis loves the Cardinals, and there is no Cardinal more beloved than Hall of Famer Ozzie Smith...

SAGAL: ...Winner of 13 Gold Glove Awards, acclaimed as the best shortstop ever to play the game and known around these parts as the Wizard of Oz, or simply the Wizard. Go crazy, St. Louis. It's Ozzie Smith.

SAGAL: Now, Ozzie, you came here to St. Louis to join us from where you live now that you're retired, which is...

SAGAL: So you retired from the game back in the '90s, but you've never left St. Louis.

SMITH: Never left it, and this is why.

SMITH: Why would I leave?

SAGAL: I always wondered about that because there's a kind of cliche in sports that when somebody, you know, does something amazing for the local team - like, say, hits a homer to win the National League championship - they say, that guy will never pay for a beer in this town again.

SAGAL: So is it true that you can't pay for your own beer in this town again?

AMY DICKINSON: Oh, I love it.

SAGAL: You go - I mean, do you just walk into any bar and just say, you know, I'll have a beer, and just wait?

SAGAL: Yeah. But you do get recognized when you walk around town?

SMITH: I do. I never have to wait in line for dinner, either.

SAGAL: I bet not.

SAGAL: Do you still follow the game? Sometimes, I understand that retired players - they can't enjoy it because they're not playing anymore.

SMITH: Yes, I follow the game. I go to spring training.

SMITH: And I usually go when the pitchers and catchers report.

SMITH: I visit with the guys for, like, 10 days. And then, when they start playing games, I get out of there, and that way, I can't get blamed.

SAGAL: Do you do any, like, instruction to the shortstops? You're, like, all you need to do is leap 30 feet sideways, get the ball...

SAGAL: ...Of the guy coming into second base and throw it to first? Try that.

SAGAL: Do they come up to you and ask questions - the shortstops...

SAGAL: ...Who are playing the game? What kind of questions do they ask you?

SMITH: They ask, well, how do you get into the flow of it, you know? And the one thing that I always explain to people - and we learn this in physics, you know - what's in motion stays in motion.

SMITH: So the one thing that you don't want to do is - especially as a middle infielder - is be stagnated.

SAGAL: You're liquid. You're ready to go.

SAGAL: It's interesting because you mentioned, you know, the laws of physics because I was watching some of your highlights, and that was physically impossible - half of what I saw.

SAGAL: It just couldn't be done. And I always ask this question of elite athletes like yourself. How young were you when you knew that you were good at this?

SMITH: ...Of catching it before it hit the ground.

SAGAL: Did you do it?

SMITH: I never did.

SAGAL: You never did it.

SMITH: I never did. But it was that type of determination...

SMITH: ...That made me the player that I became.

SAGAL: Oh, I understand. Because I'm going to say, again, watching you play, it just seems pure magic. It just seems like natural ability that you could leap up in the air, both feet, three feet off the ground and peg the first baseman without hardly looking.

SMITH: Now, let me say this here. It's like Bill. I'm standing back there...

SMITH: And I'm listening to him talk.

SMITH: It just comes out.

KURTIS: It's a gift.

KURTIS: I'm sure yours is.

SMITH: It's a gift, you know? So what you do with the gift is you try and maintain it as long as you can.

SMITH: And you try and share it with as many people as you possibly can and never take anything for granted.

BRIAN BABYLON: I just want to say, just growing up in Chicago watching you on WGN, channel 9, I was always amazed on how you were just so cool 24/7. Even right now, you're, like, the coolest dude in this whole theater.

BABYLON: And it helped me understand - helped me be a better person. How do you keep that level of cool but still compete at that intensity?

SMITH: Brian, you know what? It's - you just be yourself, you know?

SMITH: When you're amongst friends...

SAGAL: If I was just being myself with a 230-pound guy barreling toward me trying to kill me with his feet, I would pee my pants. That would be...

SAGAL: ...My legitimate, honest being myself.

KURTIS: We're off to see the wizard.

SAGAL: You were known when you played as the Wizard of Oz or just the Wizard for your magical plays at shortstop, so we thought we'd ask you about the original "Wizard Of Oz" - the classic 1939 movie. Answer 2 out of 3 questions correctly, you'll win our prize for one of our listeners - the voice of their choice and their voicemail. Bill, who is the great Ozzie Smith playing for?

SAGAL: Ready to do this?

SAGAL: All right. First question - people say they don't make them like they used to, and it's true. The "Wizard Of Oz" is proof of that. Which of these is the real reason that the "Wizard Of Oz" as it was made could not be made today? A, the actors who played the munchkins were all paid a fraction of regular wages due to an old pay by height rule...

SAGAL: ...B, the Wicked Witch's broomstick, the Scarecrow's outfit and all of the fake snow were made of asbestos; or C, the 1994 Religious Freedom Act, which prevents witches or Wiccans from being presented in a negative light?

SAGAL: You're going to go for C.

DICKINSON: Well, can I tell an anecdote...

SAGAL: You may tell an anecdote.

DICKINSON: ...That's related? OK. So I read that, you know, the Tin Man with all the silver - that that makeup was so toxic that it sent the original actor to the hospital.

SAGAL: So you're basically just...

SAGAL: Yes. You got an assist.

DICKINSON: Woo. I did it.

SAGAL: Yeah. It was the asbestos. Like, remember all that scene in the poppy field where they're all sleeping, and all the snow...

SAGAL: ...Falls on their faces and wakes them up?

SMITH: That was asbestos?

SAGAL: All right. Next question. The "Wizard Of Oz" has been, of course, a pop culture treasure since its release in '39. Sometimes, things from the movie pop up in unexpected places, as in which of these? A, after Margaret Thatcher died in 2013, the song "Ding Dong! The Witch Is Dead" re-entered...

SAGAL: ...The British music charts at No. 2; B, Popeyes restaurant once offered something called the Gizzard of Oz...

SAGAL: ...Or C, Garth Brooks' 2003 Man Behind The Curtain tour, in which he sang his entire set in a booming voice from behind a curtain just like the wizard did?

SAGAL: They say A, but what do you say?

SAGAL: You're right. That's what happened.

SAGAL: All right. Let's see if you can be as perfect in this as you were in just about everything else.

SAGAL: There was a fair amount of acrimony on the set of "Wizard Of Oz" with a lot of the hate focused on one of the performers. Who was it? Was it, A, Scarecrow actor Ray Bolger, who walked around the set saying, actually, I'm very smart and mansplaining everything...

SAGAL: ...B, Vladimir Oskoff (ph), a Russian method actor who played the lead flying monkey and, well, decided to act like a monkey on the set, if you know what I mean; or C, Terry, who played Toto the dog, who was paid more per week than most of the human actors he worked with?

SAGAL: You're right. It was C.

SAGAL: Terry, the dog who played Toto, brought down, like, 150 bucks a week, which at the time was the equivalent to about $2,000 today. So he was a well-paid pup. Bill, was Ozzie as perfect as he was here as he was on the field?

KURTIS: That is a great score, Ozzie.

KURTIS: You zipped it.

SAGAL: Member of the Baseball Hall of Fame, the Cardinals legend, president of the Gateway PGA REACH Foundation, their 10th Annual Gala and Golf Tournament this September 22 to 23. Ozzie Smith, the greatest shortstop who ever played. Thank you so much for being with us.

(SOUNDBITE OF SONG, "LIFE IS A BALLGAME")

SAGAL: In just a minute, Bill asks for a schmear in our listener limerick challenge. Call 1-888-WAIT-WAIT to join us on the air. We'll be back in a minute with more of WAIT WAIT... DON'T TELL ME from NPR.