Accessibility links
A Muslim Woman Is Shaking Up Philippines' Senate Campaign Samira Gutoc, a women's rights advocate, is fighting an uphill battle in Monday's election. But she has already won a loyal following. 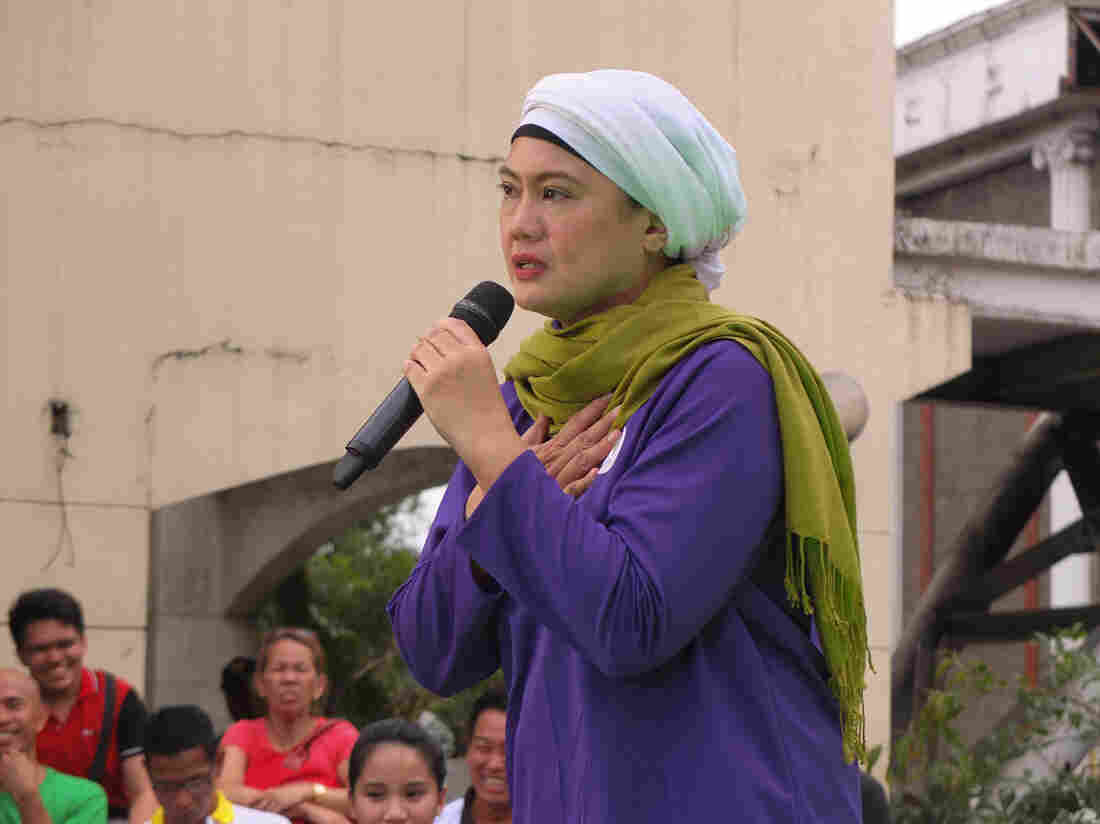 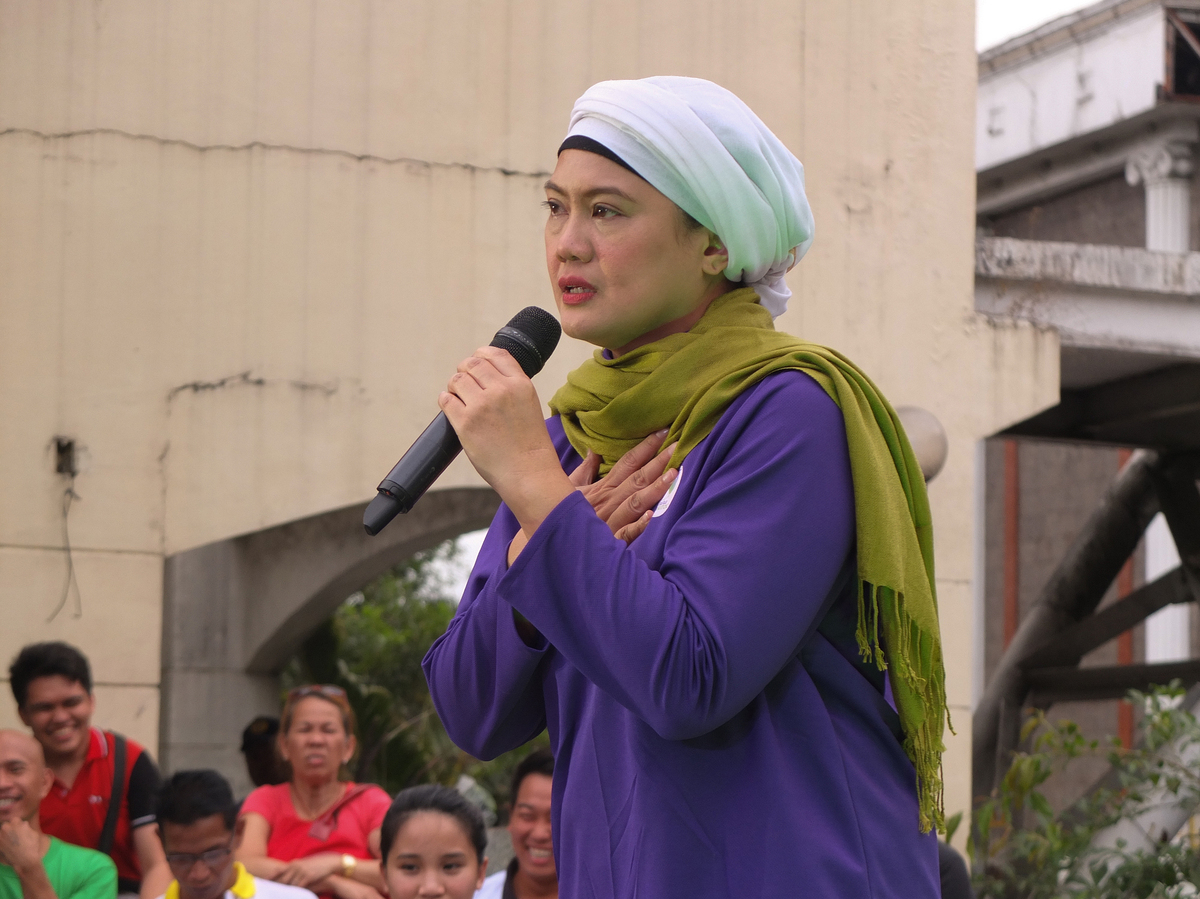 Samira Gutoc cannot help but stand out from the crowded roster of candidates in the Philippines' midterm elections. The ebullient 44-year-old is a Muslim, and the only woman among the opposition's slate of eight candidates running for the Senate.

Half of the 24 seats in the upper chamber and all of the 297 seats in the House of Representatives will be chosen in Monday's polling. The Elections Commission says 62 million voters have registered, and if history is any guide, more than 70% of them will turn out.

Rodrigo Duterte, the populist president whose off-color remarks equally repel and attract Filipinos, is not on the ballot. But the election is very much a verdict on his first three years in office. The 74-year-old president has crisscrossed the country for the Senate hopefuls of his coalition and promoted his signature policy on the campaign trail. In stop after stop, Duterte — who won the presidency on a tough law-and-order platform — rarely missed the chance to warn anyone in the illegal drug trade, "If you destroy my country, I will kill."

It's a promise he has made good on. Authorities say nearly 5,300 drug suspects have been killed in police operations since Duterte took office in July 2016. Rights groups believe the official figure is a gross understatement of the drug war's carnage. 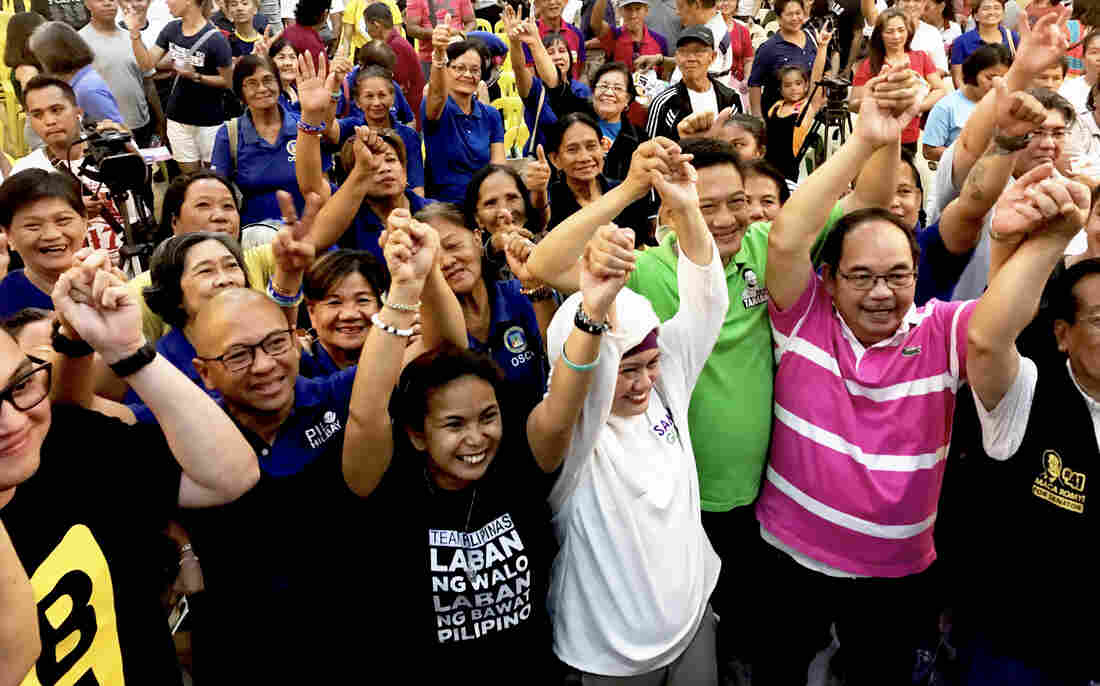 Opposition senatorial candidates known as "Otso Diretso" or the "Straight Eight" take a group photo with a crowd of civic leaders inside the St. Ferdinand Cathedral in Lucena, Philippines. Ella Mage/NPR hide caption 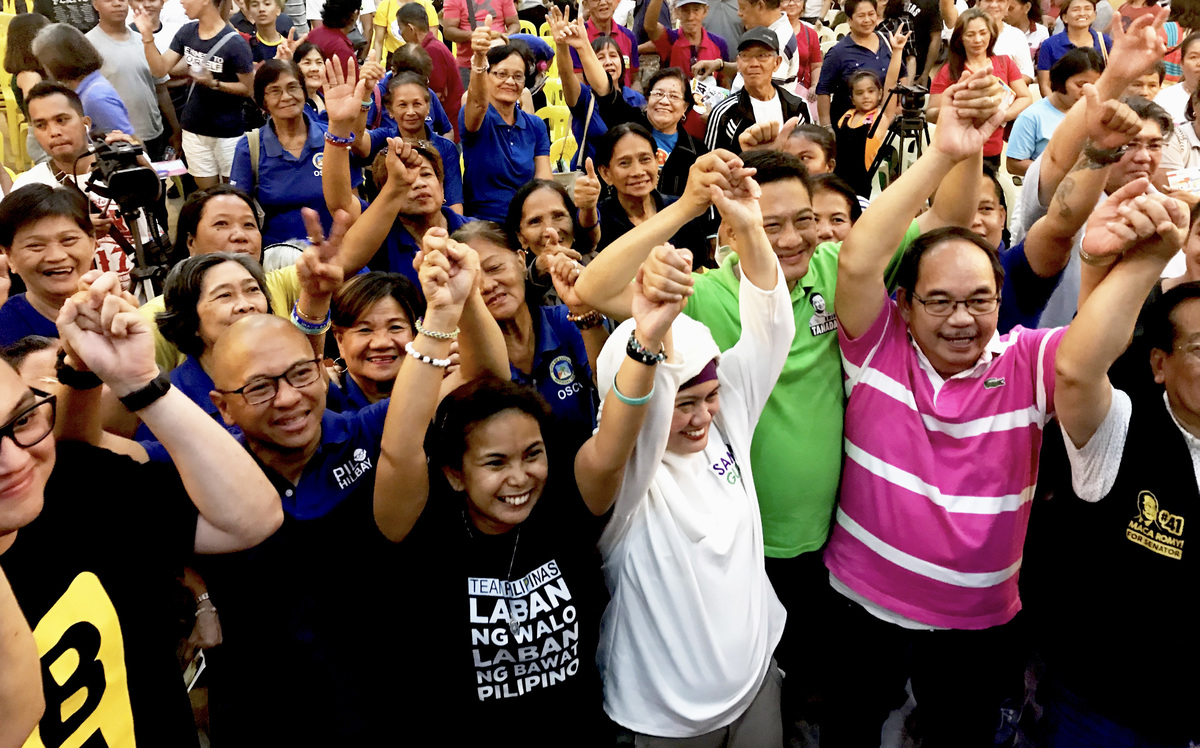 Opposition senatorial candidates known as "Otso Diretso" or the "Straight Eight" take a group photo with a crowd of civic leaders inside the St. Ferdinand Cathedral in Lucena, Philippines.

Gutoc herself is no anti-Duterte crusader. A women's rights advocate, she seems to have cultivated the ability to get along with the sometime-obstreperous president, and still challenge him.

Duterte has refrained from criticizing her in the campaign, while showing no such restraint for the rest of the opposition lineup. Gutoc's run is a bid to end a 20-year absence of a Muslim in the Philippine Senate. Senatorial candidates must run nationwide, and she's running in a country that is 92% Christian.

Again, she'll get no argument from Duterte. Born and raised a Catholic, he routinely attacks the church and its teachings. But he exhibits equanimity toward the Muslim community, which makes up 5% of the population, and he has often spoken of his own maternal grandmother's Muslim heritage.

Gutoc's faith does not appear to be an issue in the campaign. She generates more of a stir as the only woman among the male-dominated lineup of opposition senatorial candidates known as "Otso Diretso" or "Straight Eight," which is how they would like voters to mark their ballots.

Just days before Gutoc and her fellow opposition hopefuls close their six-week campaign, they careen between visits with coconut farmers and social service groups at a local cathedral and a serenaded lunch.

She sways to the music at campaign stops to the delight of the crowds in the Philippine song-and-dance political culture. She slurps noodles from a banana leaf with farmers and, in the next breath, chides Duterte.

Gutoc gently jabs him for not confronting China over its aggression in the South China Sea, which has hurt Filipino fishermen and which she calls a sellout.

"If you are bowing to China," she tells NPR, speaking of Duterte, "you should bow more to your own fisher folk or farmers. People who are prejudicing our future are [on] the other side."

Duterte has attacked her opposition Liberal Party, accusing it of plotting to oust him. He has tagged politicians of all stripes with involvement in the illegal drug trade, publishing a "narco list" of names of officials, mayors and other politicians who he says are involved in the drug trade. Human rights lawyers call it a violation of due process, and critics say it amounts to a political hit list.

Instead of making accusations at campaign rallies, Gutoc asks aloud, "Why don't you figure out issues like poverty?"

Her answer: "Election time [is] character assassination time." She says fear of retribution has kept local officials from endorsing the opposition.

Where Gutoc is willing to stand up to the president, whose attacks on free expression and women have done little to dent his high approval ratings, she has garnered a following. Her candidacy can be seen as part rejoinder to Duterte's demeaning rhetoric on women. 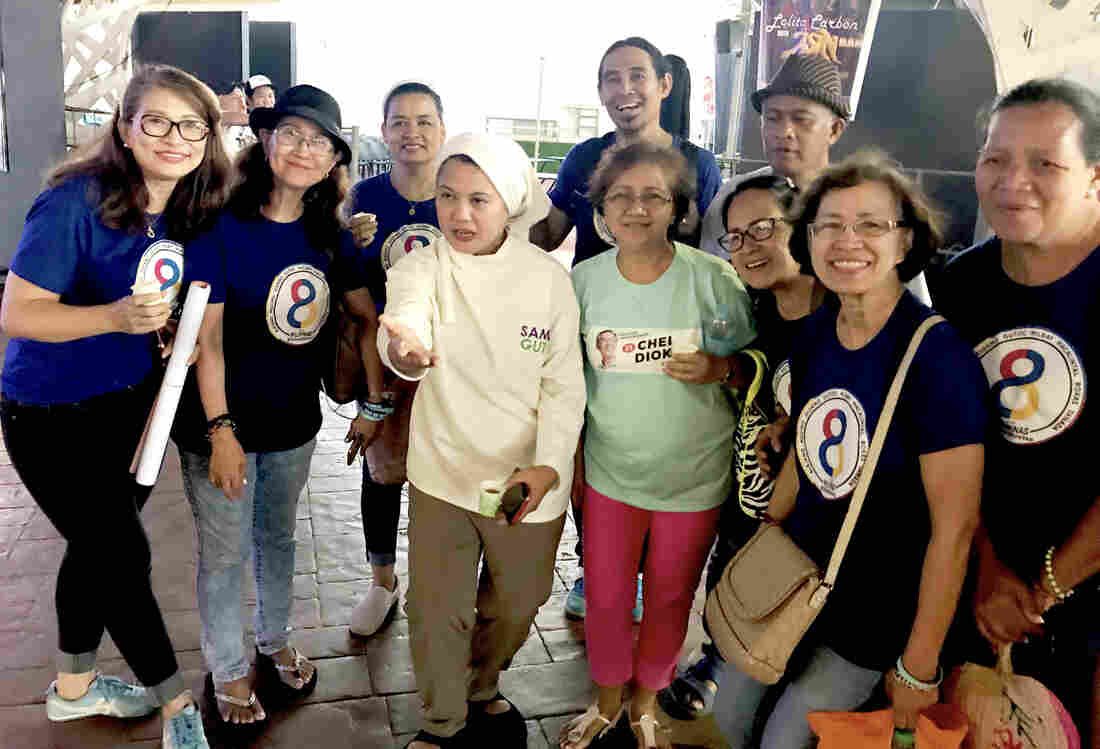 Samira Gutoc (center-left, in white) poses with a group of women who approached her after one of the Otso Diretso campaign rallies in Lucena. Ella Mage/NPR hide caption 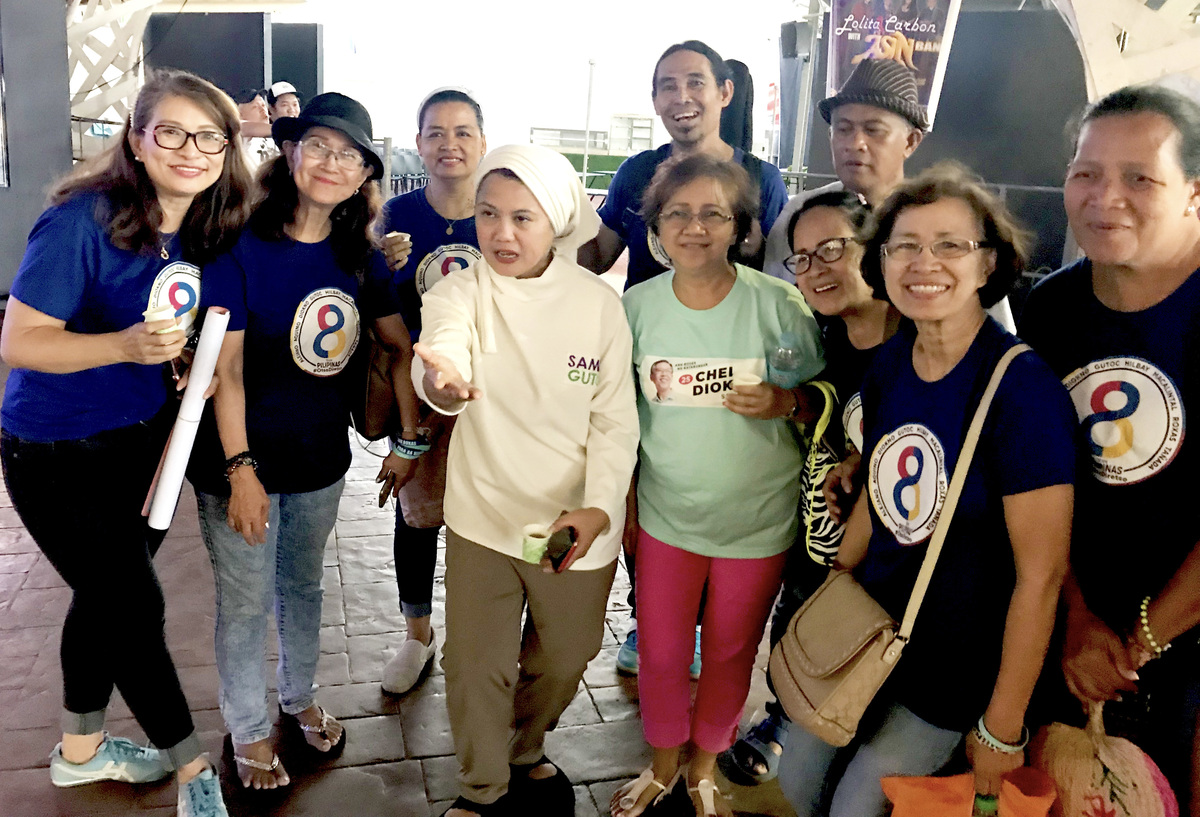 Samira Gutoc (center-left, in white) poses with a group of women who approached her after one of the Otso Diretso campaign rallies in Lucena.

At rallies, she is the fiery fresh face breaking Muslim stereotypes. She can break out into song about the loneliness of Filipinos who work overseas —some 2.3 million citizens.

As the daughter of a diplomat raised in Saudi Arabia, Gutoc recalls hosting Filipino "families of workers who had no homes. I saw their pain," she says.

A lawyer by training, Gutoc has worked as a civic leader advocating for women, the environment and marginalized groups. She returned two decades ago to her native Mindanao, the main southern island in the Philippine archipelago that is also home to many of the country's Muslims. Gutoc, who wears a headscarf wrapped turban-like around her head, served as a member of the Regional Legislative Assembly of the Autonomous Region in Muslim Mindanao. She She told Esquire Philippines that she's working hard to help "improve the lives of my family, my community, my people."

She herself is now exiled from her hometown of Marawi, the city on restive Mindanao that was laid waste in 2017 when Philippine government troops battled ISIS-linked militants who had dug into the city. Gutoc led volunteers in rescuing residents trapped during the five-month siege, an experience that animates her belief she can serve.

"It's one motivation that compels me to be in the public eye, because I can talk about their struggle," she says. "And it's also the struggle of anyone [trying] to find a house and shelter and safety."

Duterte had jokingly exhorted soldiers to commit rape during the Marawi siege. Gutoc called a remark offensive and quit a local peace panel to which Duterte had appointed her. In the campaign, she sounds the alarm about rape in a country where police data show on average a woman is sexually assaulted every 72 minutes.

"We have got to band together, join together and file a claim against that bastard who did it to us," she roars before an audience at De La Salle University in Manila.

Her call to report rape resonates. Michele Orbeta, 21, says, "When she opened up about that during the forum, I could tell — especially amongst my fellow students — it really got everyone's attention."

As she campaigns, women of all ages reach out to Gutoc, hugging her and ambushing her for selfies.

Marino Amado, 67, is among them. The retired bank manager is ecstatic over meeting Gutoc and, like many, finds Duterte's disparaging remarks about women distasteful. Amado says lack of equality is the most entrenched problem for women, and she sees Gutoc as a counterpoint to the president's swagger.

The opposition slate has faced the money and the machinery of their Duterte-allied rivals, and polls this past week showed they had not broken through to the electorate. Despite Gutoc's obvious appeal, her biggest hurdle in Monday's election may be name recognition. But on the ballot, each candidate is assigned a number that corresponds to their name. Hers is "36," and with a little self-deprecation, she hopes to lodge it in the voters' minds.

"Thirty-six is my ballot number," the stout Gutoc tells audiences, "and my waistline."