Accessibility links
NPR Review: 'The Farm,' By Joanne Ramos Joanne Ramos builds her own experience into this story of a young Filipino woman who ends up on a seemingly cushy "gestational retreat" where women — called "hosts" — carry babies for rich families.

Plutocracy, Not Theocracy Compels The Handmaids Of 'The Farm'

Plutocracy, Not Theocracy Compels The Handmaids Of 'The Farm' 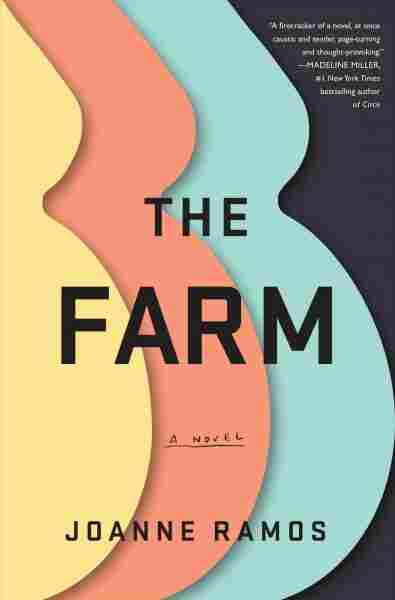 The Farm might serve only as an echo-chamber treatment of The Handmaid's Tale, were it not for author Joanne Ramos's deft way of creating characters. She peoples her book with figures who are appealingly engaging — or, at times, engagingly repellent.

Debut novelists tend to honor the precept "write what you know," and Ramos grounds the work solidly in her own experiences; the dizzying world of Manhattan investment banking plays off another kind of wealth, the author's richly textured Filipino background. The same control and exploitation of female reproductive organs occurs here as in Atwood's Gilead, though in Ramos' world, the motivating force is not prophets but profits, not theocracy but plutocracy.

The action takes place in the present day, which at times can seem to be merging with the bleak future of Margaret Atwood's classic. Golden Oaks, a technological harem for surrogate mothers known euphemistically as a "gestational retreat," houses a languid collection of residents who labor only in the maternal sense of the term. Also known as the Farm, the maternity ward-cum-spa operates in the countryside north of New York City. There and in Manhattan we meet the women who find themselves caught up in a drama with a heady, chilling impact.

Jane Reyes, the Filipino mother of newborn Amalia, has a tendency to make innocent mistakes. Babysitting for another mom's family, on impulse she suckles her employer's infant (he was hungry!) and gets caught doing it. Wet nurses don't go over big with Manhattan's monied set. The disaster ultimately leads her to Golden Oaks, a seemingly golden opportunity, but one which compels Jane to leave her own child with her cousin, the grandmotherly Ate. A baby nurse extraordinaire, Ate is so in demand by well-to-do Manhattan mothers that they schedule their deliveries around her availability.

The imperious mother superior of the Farm, Mae Yu, flexes her corporate muscles to keep the young women (called "Hosts") in line. Amateur photographer Reagan, something of an anomaly among the Golden Oaks surrogates in her defiant, questing ways, befriends a spitfire named Lisa, who will talk back to anyone, sneak her boyfriend onto the property (a more difficult task than it would seem), and at the same time carry three pregnancies in a row for one family. "I am my hormones," Lisa says sarcastically, yet with a minor note of pride.

Ramos tells their stories in alternating chapters, providing glimpses into the minds and hearts of her characters as they go on their journeys during the nine months Jane is enceinte. The tone changes with the depiction of each character — sympathetic when we enter Jane's world, cold and ironic when we visit with Mae. The circumstances of Mae's existence, the privilege, the grasping for prestige, are impeccably, savagely drawn.

The Hosts are cossetted, fed healthy delicacies, given the cushy robes that seem the universal marker for a spa setting — all they need do is submit to endless pampering. Each mother will earn a significant bonus upon successfully bearing a healthy newborn. But a surprising ending slams home the venality of the Farm's insidious dynamic.

Some novels are born with book club DNA, great narratives that can also spur energetic discussions.

If there is a hitch in the telling of this tale, it's that Ramos presents such a sunny picture of the Farm, the reader might feel an urge to check right in. Even though Mae and her cohorts refer to the Hosts impersonally, by number, surrogacy is not in and of itself especially shocking or shameful. Yes, there are cameras tracking Hosts around the Farm, yes, their diet is circumscribed (no candy bars for you!), and yes, after they return from walks outside they have to endure every cavity being checked for ticks. Until the shocking end of the book, though, these measures seem like petty inconveniences.

Some novels are born with book club DNA, great narratives that can also spur energetic discussions. Debate will rage around the treatment of the young women at the Farm, but the novel's complex mélange of personalities brings a somewhat improbable story stirringly to life.