Accessibility links
NPR Review: 'The Archive Of Alternate Endings,' By Lindsay Drager The storylines in Lindsey Drager's new novel take place across a millennium, from a version of Hansel and Gretel wandering the woods in 1378 to a girl fetching water on the dying earth of 2136. 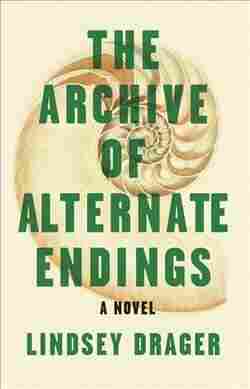 The Archive of Alternate Endings

It's fitting that Lindsey Drager's third novel, The Archive of Alternate Endings, comes out so soon after Dr. Katie Bouman and her team took the first photograph of a black hole. After all, a black hole is the opposite of a story: The black hole pulls matter into it without letting it escape, effectively making it disappear, while a story can continue to radiate meaning and matter into the world long after it is first told — as long as there's someone left to tell it. Drager's novel is all about the telling of tales, the passing on of knowledge, the way stories shift and mutate with time and reiteration, and how they can disappear into the black hole of unrecorded history if allowed to.

The Archive of Alternate Endings revolves around several storylines that take place across a millennium, from 1378 to 2365 AD, at regular intervals that match up with the appearance of Halley's Comet, which orbits elliptically, curving close to the sun and past Earth once every 75ish years before reaching to the edge of the solar system and coming back around.

One of Halley's appearances, in 1835, coincides with the lives of Wilhelm and Jacob Grimm, the famous pair of brothers who collected and recorded oral folklore, consolidated the various versions of common tales, and wrote them down, only to keep editing them further over the years, rendering many of the stories tamer. In the book's first chapter, the brothers Grimm listen to a woman tell them the story of a pair of siblings who are lost in the woods, a story they've recorded many times before. But no, the woman tells them, they've heard it incorrectly: "The story, she says, is about a sister who wants to save her brother. The woman says: the story is about a boy who loves boys and the parents who abandoned him because of it."

Meanwhile — because these stories occur simultaneously across the book, time curving back and forth on itself — a great-nephew of Wilhelm Grimm meets a writer in New York City in 1986, the last time Halley's Comet appeared, and the two men spend the night together. The great-nephew takes a book from the writer's shelf, an illustrated copy of the Hansel and Gretel story, which he takes with him when he packs up his things and drives South. He is ill with the disease that people have been murmuring about, and his family will not take him in, because he is a man who loves men. So he goes to a woman he has heard of who takes care of men like him — drawn from a real-life woman, Ruth Coker Burks, who cared for men dying of AIDS-related complications and buried those left unclaimed in her own family cemetery.

Other plotlines include the unnamed illustrator of the Hansel and Gretel book mentioned above; Johannes Gutenberg and his illiterate, storytelling twin sister; a version of Hansel and Gretel wandering a forest in 1378; Edmond Halley — after whom the comet was named — some years after his death, when his predictions about its return proved true; a girl on a future, ravaged Earth who fetches water for her dying community; and two space probes transmitting human knowledge into the universe after all life has disappeared from Earth. If the links between these disparate moments seem tenuous, that's only because listing them doesn't do justice to the way Drager weaves together their themes.

If the links between these disparate moments seem tenuous, that's only because listing them doesn't do justice to the way Drager weaves together their themes.

Take, for example, three moments that link hunger, thirst, and desire, words that are interchangeable when describing various kinds of want: First, the illustrator in 1910 considers the story of Hansel and Gretel and realizes that it is "full of mouths: mouths that cannot be fed, mouths belonging to children that fill themselves with the witch's bait, mouths of ovens that consume, the mouth of the witch who wants to eat the children." Another moment, in 1986, when a sister joins her brother on the journey to the house in the South where he dies, and where she remains to help: "We are always baking — in the middle of the summer, in the middle of the night. We are always making sure that when the men arrive they are offered something sweet." And one more, in 2136, when the girl fetching water for her people becomes tired: "She could stop right here, but their thirst. She is compelled to quench it. Mouths, the water carrier thinks. Her story is full of mouths."

There is something both nihilistic and deeply hopeful in Drager's looping novel. Nihilistic, because in so many ways it indicates that as parts of a continuum of human storytelling, life, love, and hate, none of us matter; but hopeful because that continuum means our stories are related, our narratives interlocking, and so while we may be insignificant, we are also never alone.