Accessibility links
President Trump Welcomes Hungary's Viktor Orban To The White House When the Hungarian prime minister met with President Trump on Monday, it marked a coming together of two leaders known for their nationalist worldviews and hard-line immigration policies. 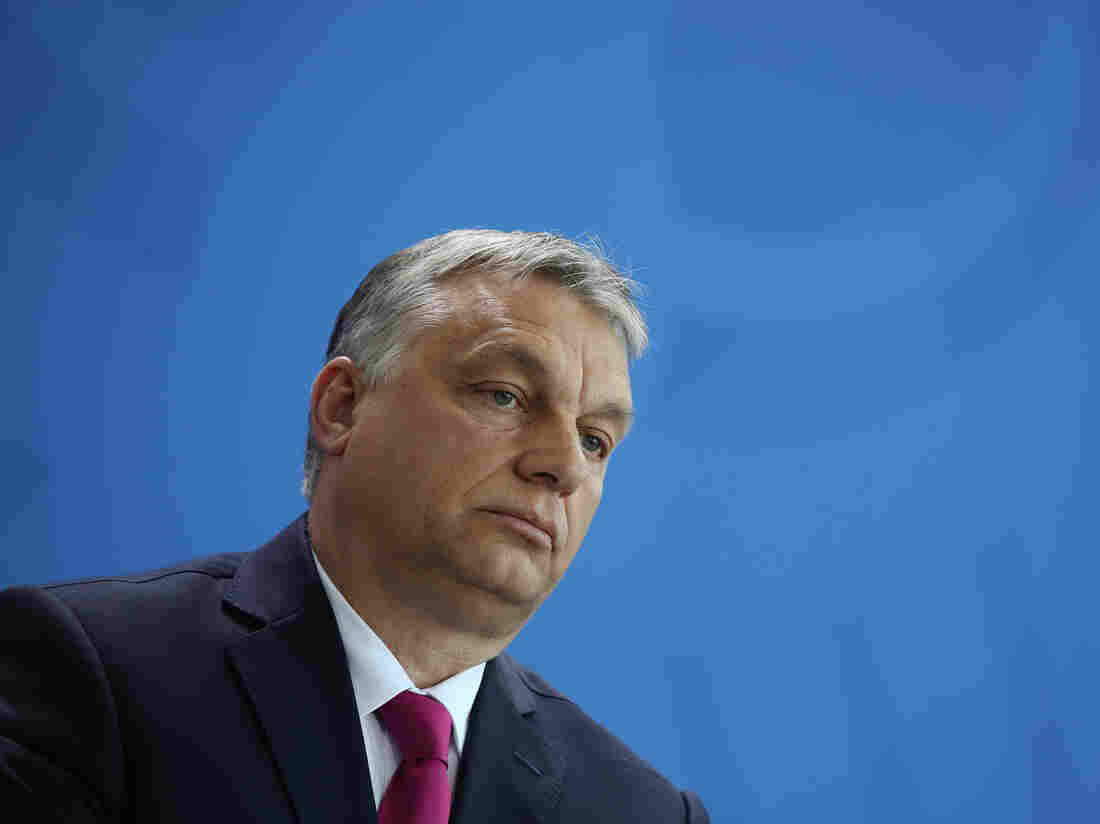 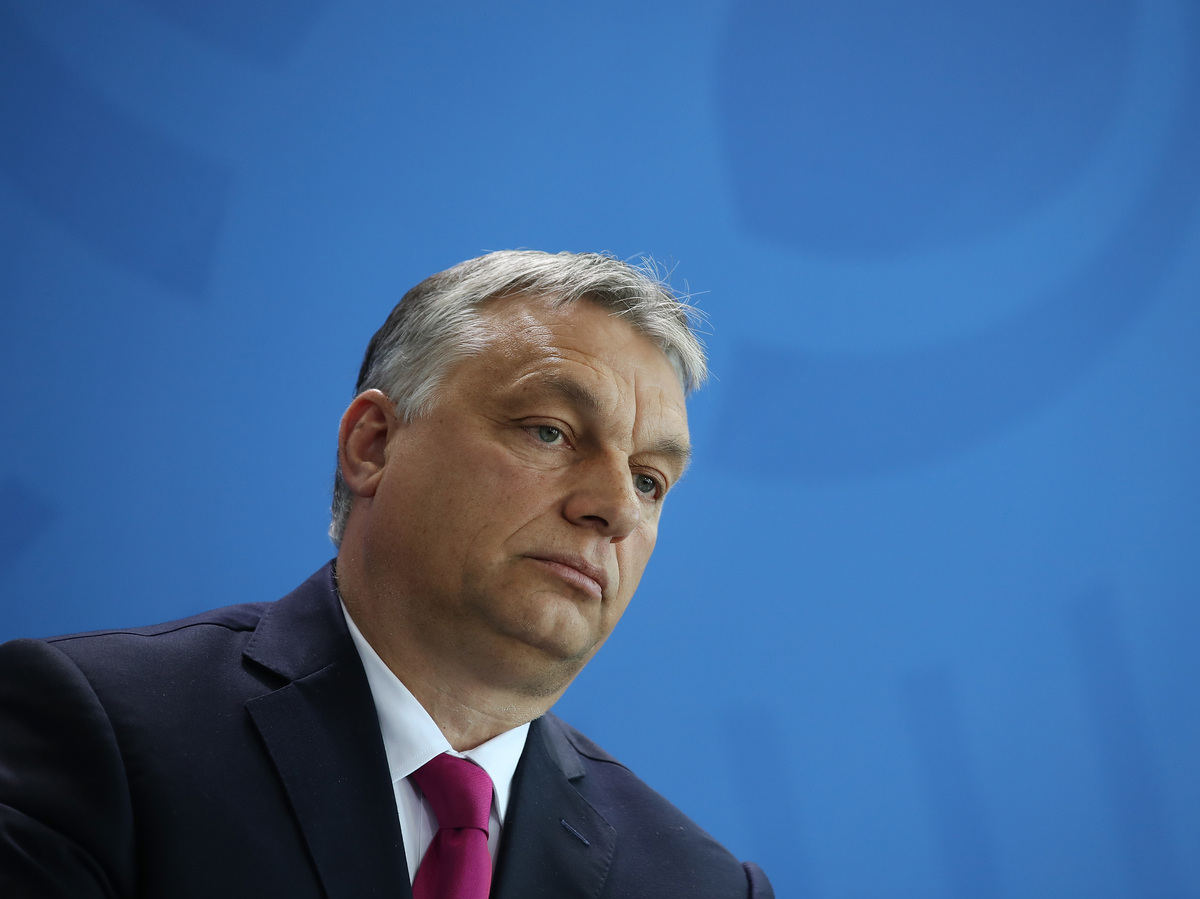 Hungarian Prime Minister Viktor Orban speaks to the media in Berlin on July 5, 2018.

Hungarian Prime Minister Viktor Orban visited the White House on Monday, his first formal meeting with a U.S. president in more than 20 years.

Then-President Bill Clinton received Orban, now one of Europe's most prominent nationalists, in 1998, back when the Hungarian leader was a 35-year-old reformist who had earned his pro-democracy street cred as an anti-Soviet activist. Orban had helped his country transition out of communism.

Today, Orban is running Hungary like a "soft autocracy," according to one biographer, and alarming the European Union. The Obama administration limited diplomatic ties with Hungary over concern that Orban is undermining democratic values.

But some analysts say the Hungarian leader has found a kindred spirit in President Trump, a fellow nationalist. Trump's former chief strategist, Steve Bannon, once called Orban "Trump before Trump." The two men both have hard-line views on immigration. They slam critical coverage as fake news. Both have strained relationships with traditional American allies in Europe, and both have spoken positively about Russian President Vladimir Putin.

"Both Donald Trump and Viktor Orban have made immigration their signature issue," says Kim Lane Scheppele, the Laurance S. Rockefeller professor of sociology and international affairs at Princeton University and an expert on Hungary. "Whipping fears and nationalist sentiments is exactly how they operate. So it would be really tempting to say that they're working from the same song sheet. And they sort of are, at the level of rhetoric and rallies and election campaigns."

The difference, according to Scheppele, is that Orban has had far more success turning his campaign pledges into law.

Orban is considered a brilliant political tactician whose ruthlessness was forged after his Fidesz party lost elections in 2002 and he found himself out of power.

"Viktor Orban is famous for his view that politics is war," says Gabor Gyori, a senior analyst at the Budapest-based Policy Solutions think tank. "This is destroy or be destroyed."

Under Orban, Hungary has rewritten its constitution to strengthen his control over parliament and has gerrymandered the country's electoral map. His party, which controls parliament, has weakened the courts. Orban supporters control most of the media; critics are either ignored or vilified. His administration is cracking down on nonprofits supporting migrants and minorities.

"This all has the veneer of legality, so you assume Hungary is still a democracy based on the rule of law and respecting fundamental rights and European Union values," says Petra Bard, a Hungarian constitutional law scholar now living in Frankfurt, Germany. "It's hard to stomach that laws have been used to drive a democratic country into authoritarianism."

Orban has told supporters that he wants to transform Hungary into an "illiberal democracy," balancing individual freedom with the interests of the nation. He promised Hungarians that he would protect the country's homogeneity.

"We must defend Hungary as it is now," he said in a speech last year. "We must state that we do not want to be diverse. ... We do not want our own color, traditions and national culture to be mixed with those of others."

That sentiment was most prominently on display in 2015, when hundreds of thousands of asylum-seekers from the Middle East and elsewhere trekked through Europe. Many tried to cross through Hungary to reach Western European countries like Germany and Sweden.

Orban was outraged that migrants, many of them Muslim, could cross into "Christian Europe." He eventually built a barbed-wire border fence to keep them out of Hungary. They instead rerouted to neighboring countries like Croatia and Slovenia.

"I would like to raise the voice of the people all over in Europe that they are full of fear," Orban told reporters in 2015. "And the reason why they are criticizing us is that we are not defending the European borders."

The message hit home in Hungary, where church bells ring every day at noon to commemorate a military commander who stopped an invasion by Ottoman Turks in 1456.

In the southern city of Pecs, Kazmer Szabo, a 79-year-old retired dental technician, considers Orban a protector. He points to an Ottoman-era mosque in the city square.

"At the end of the day, this is about history," he says. "Orban understands that we are a country that was once occupied for 150 years by the Turks. We know what that means."

The number of migrants arriving in Europe is now at its lowest level since 2014, largely because of deals struck by centrist politicians such as German Chancellor Angela Merkel and former Italian Interior Minister Marco Minniti. Yet Orban and his surrogates falsely accuse Hungarian American billionaire George Soros of encouraging migrants to come again.

During election season, Soros' face is plastered on billboards and anti-immigration ads. On recent billboards, he was pictured with Jean-Claude Juncker, the European Commission's president, who the Orban administration claims is working with Soros to revive migration.

"We have seen how George Soros and his network of NGOs, civil groups and lobby organizations ... have infiltrated European institutions," says Balazs Hidveghi, the spokesman for Orban's political party, Fidesz.

Because Soros is Jewish, this vilification unnerves Andras Heisler, who leads the Federation of Hungarian Jewish Communities in Budapest.

"George Soros is the emblematic Jewish capitalist," Heisler says. "To make a campaign with his face, his smile — this is playing with fire."

Soros founded Central European University, which he created as a bridge between post-communist eastern and central Europe and the more open West. Orban's administration has expelled the institution from Hungary, claiming it is forcing multiculturalism on a country that doesn't want it.

CEU is an American institution, but Orban doesn't seem concerned about upsetting the United States. It's not the first time. Late last year, his administration refused an American extradition request for two suspected Russian arms dealers, instead sending them back to Russia.

The White House said it hoped to use Orban's visit as an opportunity to lure Hungary away from Russia and China by signing agreements on arms and natural gas. But in a letter to Trump last week, members of the Senate Foreign Relations Committee said they want Orban to address his country's "downward democratic trajectory and the implications for U.S. interests in Central Europe."

The European Union has also issued warnings to Hungary about its backsliding on democracy, but Orban has faced no serious punishment.

Instead, says Scheppele, the Hungary expert at Princeton, he is inspiring nationalists across the world.

"Orban uses a language that's like a dog whistle not just in his own country but to autocrats and right-wing nationalists everywhere in the world," she says. "He's created in plain sight an autocratic regime in the middle of the EU, winning what look like real elections, passing what look like real laws. ... Other autocrats want to know, how do you do it?"