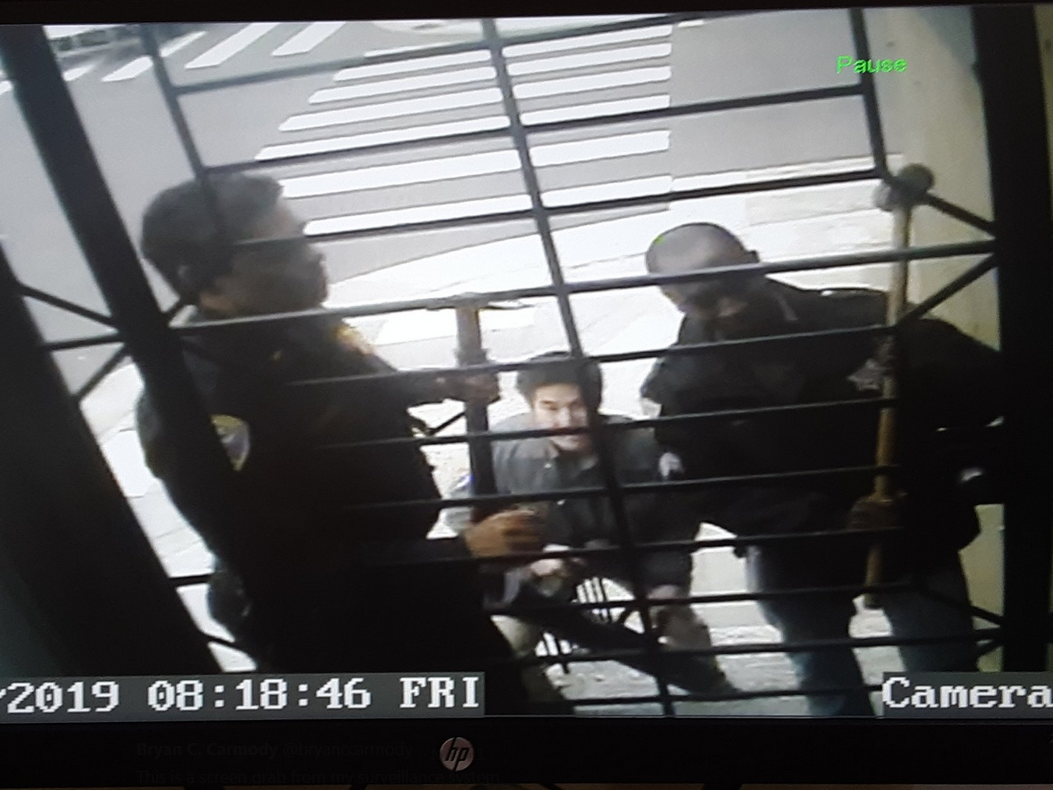 A still from a surveillance camera at the home of Bryan Carmody, which was raided by San Francisco police on Friday. Bryan Carmody hide caption A still from a surveillance camera at the home of Bryan Carmody, which was raided by San Francisco police on Friday.

San Francisco police raided the home and office of a freelance journalist on Friday, taking a sledgehammer to the gate of his house and seizing his computers, phones and other devices.

Their goal: to uncover the source of a leaked police report in the possession of freelance videographer Bryan Carmody.

The raids on Carmody's home and office are the latest in a series of events concerning the death of San Francisco public defender Jeff Adachi in February, at age 59.

Within hours of Adachi's collapse in a San Francisco apartment, details from a leaked police investigation into his death were already showing up in news reports, according to the San Francisco Chronicle.

A number of the details in the police report were salacious, suggesting that perhaps one or more members of the police department were trying to tarnish the reputation of Adachi, who was known as a police watchdog and fierce advocate for criminal justice reform. In San Francisco, the public defender is an elected position.

"There were leaks happening all over the place," Carmody recalled to the Los Angeles Times. Carmody told the Chronicle he sold the report to three TV news stations and explained that, as a freelancer, such work was how he generated income.

The city's supervisors harshly criticized the police department for the improper leak of the report. Adachi's widow called the release "despicable."

The coroner later determined that Adachi died as the result of an accidental overdose of cocaine and alcohol. 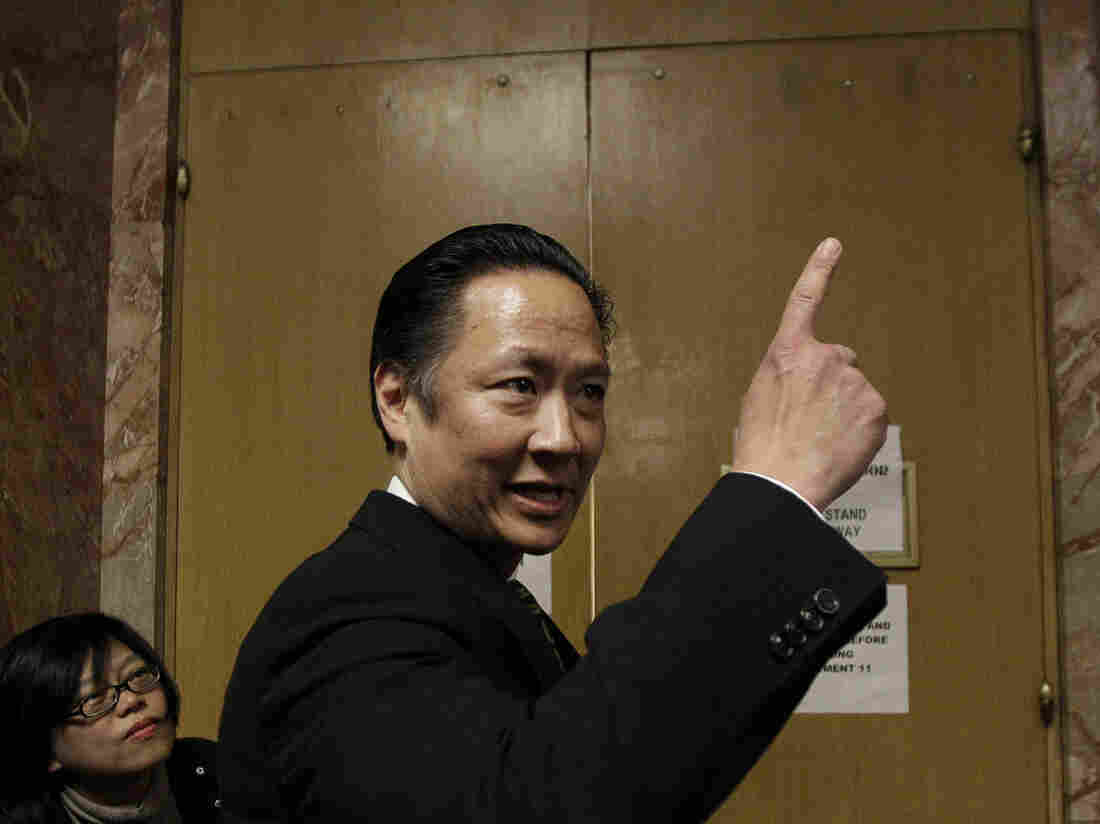 San Francisco Public Defender Jeff Adachi, who died in February, is seen here in 2012. A freelance journalist says his home and office were raided by San Francisco police after he refused to name the source who leaked a police report concerning Adachi's death. Jeff Chiu/AP hide caption 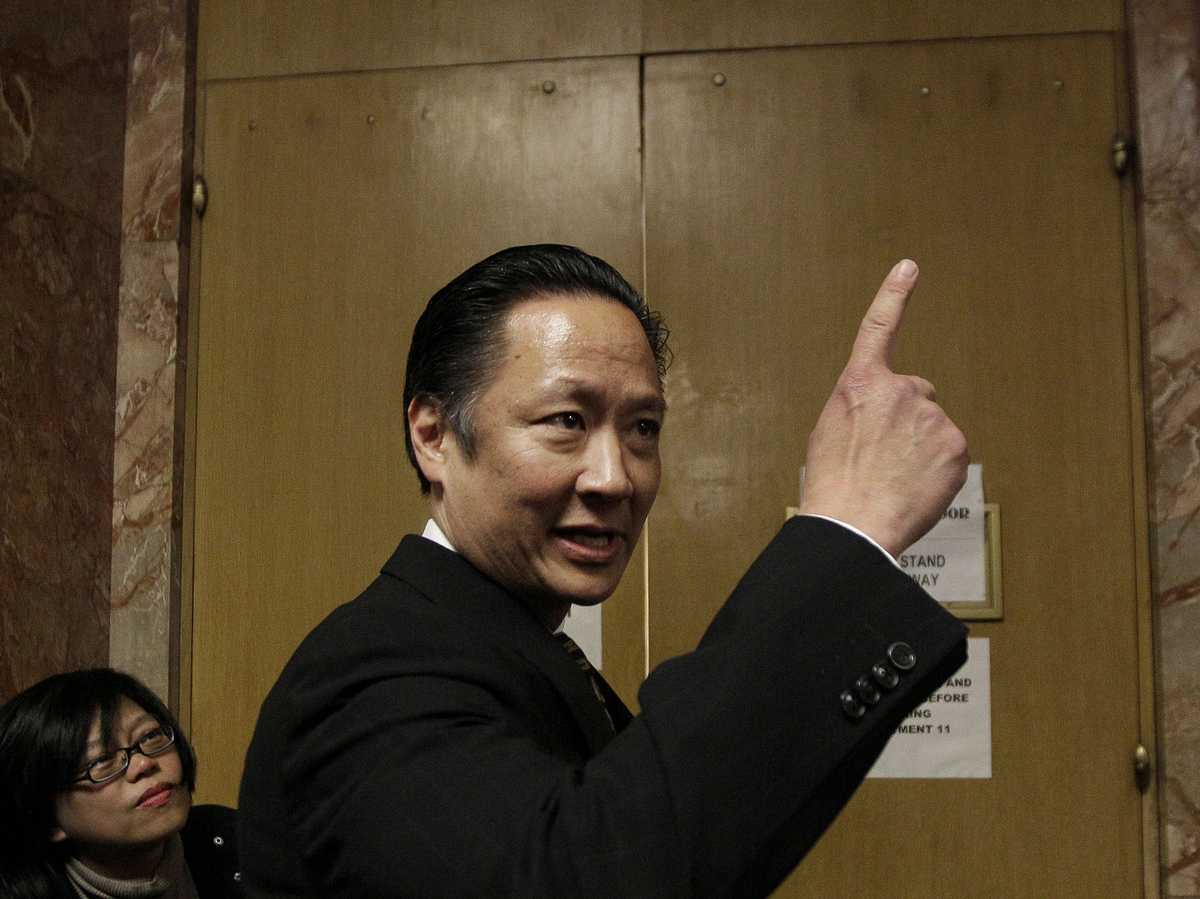 San Francisco Public Defender Jeff Adachi, who died in February, is seen here in 2012. A freelance journalist says his home and office were raided by San Francisco police after he refused to name the source who leaked a police report concerning Adachi's death.

Carmody says two police officers came to his house two weeks ago and asked him to reveal his source, which he declined to do.

On Friday morning, he tells NPR member station KQED, the officers attempted to break down his front security gate. Here's more of what he told the station:

"The officers then searched his entire home with their guns pulled and put Carmody into handcuffs before transporting him to his office, which they also searched, he said.  Carmody was detained for more than five hours before being released."

"I'm smart enough not to talk to federal agents, ever," Carmody told The Washington Post. "I just kept saying 'lawyer, lawyer, lawyer.' " He says police found the report in a safe, but there were no markings on it to reveal its provenance.

A spokesman for the San Francisco police said the "search warrant executed Friday was granted by a judge and conducted as part of a criminal investigation into the illegal release of the confidential Adachi police report." He called it "a step in the process of investigating a potential case of obstruction of justice along with the illegal distribution of confidential police material."

The FBI said it had two agents present to interview Carmody but did not participate in the search. He was released that afternoon.

"I don't think it was right to break my door down," Carmody told the Chronicle. "I'm one of the original independent media companies in San Francisco. This is outrageous." He continues to protect the identity of his source.

"It's designed to intimidate," Carmody's lawyer, Thomas Burke, told The Associated Press. "It's essentially the confiscation of a newsroom."

Burke said that normally journalists would receive a subpoena and then get a lawyer to ensure the proper protections. "So much information has nothing to do with the purpose of their investigation," he said. "If you are looking for one piece of information, that's why you issue a subpoena."

The Freedom of Information Committee of the Society of Professional Journalists' Northern California chapter released a statement condemning the raid, citing California's Shield Law that protects journalists from being held in contempt for refusing to divulge sources or unpublished information.

"That this search was carried out weeks after Carmody declined a request from San Francisco police to divulge his sources shows an alarming disregard for the right to gather and report on information," the committee wrote.

The group alluded to the notion that news outlets' publishing of the leaked police report didn't necessarily adhere to its ethics guidelines: "The Society of Professional Journalists Code of Ethics directs: '[D]o not pay for access to news' and says reporters should 'avoid pandering to lurid curiosity.' Journalists should consider the motivations of anonymous sources and news organizations should disclose when content has been provided by outside sources, whether paid or not."

The group says that in no way justifies the seizure of Carmody's equipment, which he estimated as being worth $30,000 to $40,000.

Adachi's successor as San Francisco public defender, Manohar Raju, said in a statement Friday to the Chronicle that "[a]ll of our criminal justice and City Hall leaders agree that the release of police reports in this fashion is wrong. ... I am pleased that Chief [Bill] Scott and others are keeping their word and working to get to the bottom of it."

Raju clarified his statement on Monday to NPR, adding that he had "no information regarding the justifications for the search conducted by police. Nothing about this statement should be interpreted as condoning specific police tactics in this matter."