Accessibility links
Felicity Huffman Pleads Guilty In College Bribery Scandal Huffman is hoping her guilty plea, and her unequivocal apology, will earn her some leniency at sentencing. In a statement last month, she expressed deep regret and shame for her actions. 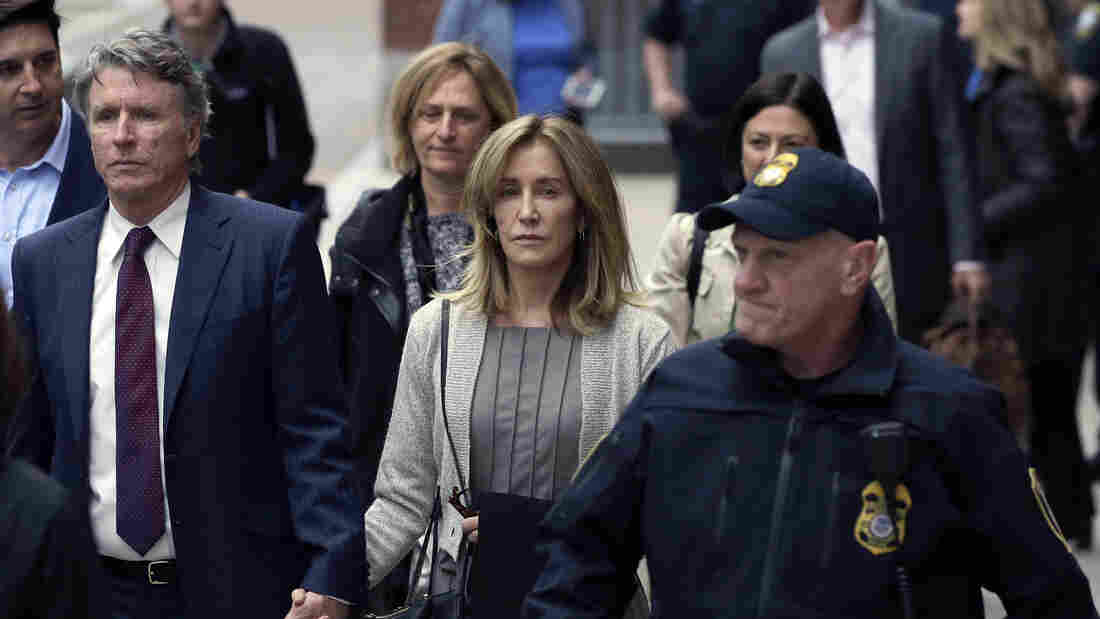 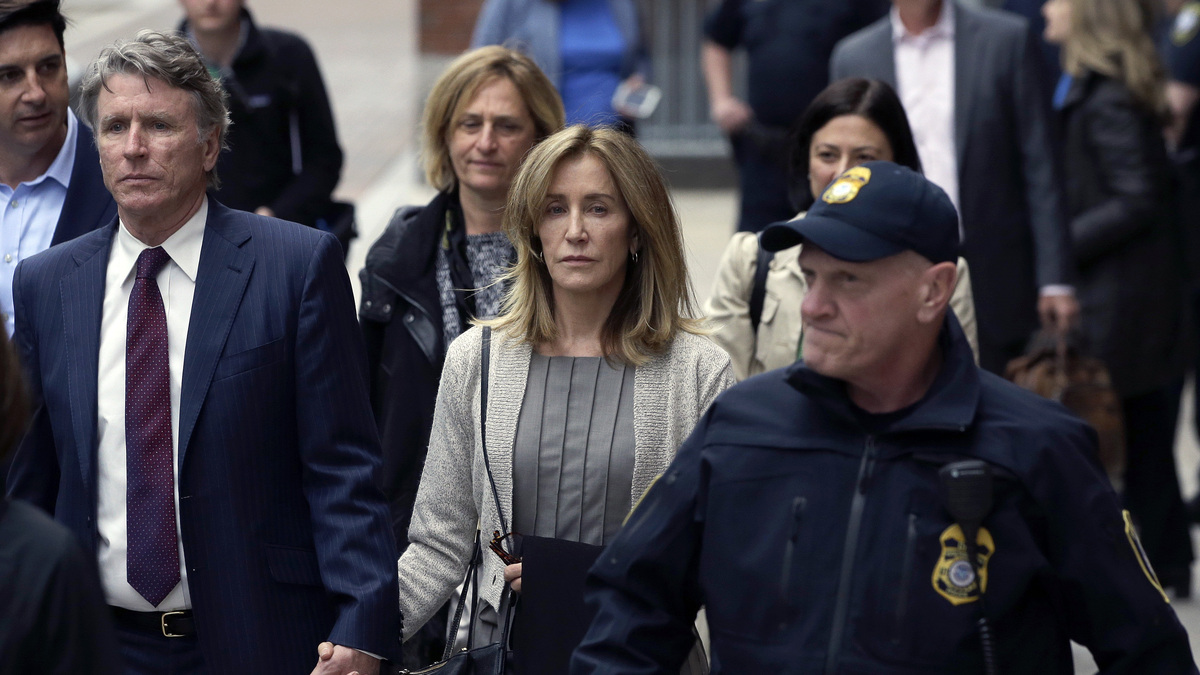 Felicity Huffman, center, departs federal court with her brother Moore Huffman Jr., left, Monday, May 13, 2019, in Boston, where she pleaded guilty to charges in a nationwide college admissions bribery scandal.

Actress Felicity Huffman, known for her role in Desperate Housewives, broke down in tears in federal court in Boston today, as she pleaded guilty to a scheme to boost her daughter's SAT scores.

Huffman looked straight ahead, ignoring the phalanx of reporters and cameras as she entered the courthouse to plead guilty to conspiracy to commit mail fraud and honest services mail fraud. Inside, she cried as she explained to the judge that her daughter knew nothing about the scam to inflate her test scores, and that her daughter's accommodation for extra time on tests was legitimate.

"Everything else" that prosecutors accused her of doing, she said, "I did."

That includes paying $15,000 to have someone correct her daughter's wrong answers, after her daughter completed the test. The person making the corrections has also pleaded guilty, while the exam proctor who allegedly allowed it to happen, has pleaded not guilty.

Huffman is hoping her guilty plea, and her unequivocal apology, will earn her some leniency at sentencing. In a statement released last month, she accepted "full responsibility for [her] actions" and expressed "deep regret and shame." She added, "I want to apologize to the students who work hard every day to get into college, and to their parents who make tremendous sacrifices to support their children and do so honestly."

Prosecutors are recommending $20,000 in fines and a four-month prison sentence. Huffman could end up serving even less, and possibly at a half-way house.

Another parent who pleaded guilty today, Los Angeles businessman Devin Sloane, is likely to serve a longer sentence. He paid $250,000 in bribes, disguised as charitable donations, to get his son recruited to the University of Southern California water polo team, even though his son was never a competitive player.

Sloane bought water polo gear on Amazon, including a ball and a cap, apparently for the student to wear during a photo shoot that would later be doctored to make it appear that he was in the water during a game.

When guidance counselors became suspicious, arrangements were made to have a conspirator from USC allay concerns by telling the USC director of admissions that the son played in summer water polo tournaments in Greece, Serbia and Portugal as "an attack perimeter player."

In Sloane's case, prosecutors are recommending a year in prison and $75,000 in fines.

Other defendants in the case, including Hollywood star Lori Loughlin and her husband, Mossimo Giannulli, are pleading not guilty and fighting the charges.

Some are taking the position they didn't believe they were doing anything wrong, and hoping to prevail at trial, despite the load of evidence against them. Prosecutors have amassed a heap of financial records and have recorded phone calls between the parents and with the scheme mastermind, William "Rick" Singer.

These parents could still change their pleas to guilty, but, after they declined to plead earlier, prosecutors charged them with a second count of conspiracy to commit money laundering, so they're now facing stiffer sentences.

In the meantime, the investigation continues to expand. From the beginning, prosecutors have said this is the tip of the iceberg. And many nerves are being tested as everyone waits for the other shoe — or shoes — to drop. For example, one payoff of $6.5 million to Singer has not yet resulted in charges. Also, attorneys say that some students are being targeted now for possible charges.

The government may be getting some help identifying additional conspirators from defendants who are now working as cooperating witnesses. Those who are cooperating may also be helping prosecutors boost cases against existing defendants.

Prosecutors know that any defense strategy will be to attack Singer's credibility at trial, portraying him as an admitted liar, willing to say anything that would get him leniency on his sentence. So having others to corroborate Singers testimony would be of value to the prosecution.