Accessibility links
Alice Rivlin, First Woman To Serve As Budget Director, Dies At Age 88 Rivlin overcame sexism in the world of economics and was a heavweight, serving as former President Bill Clinton's budget director and the first head of the Congressional Budget Office. 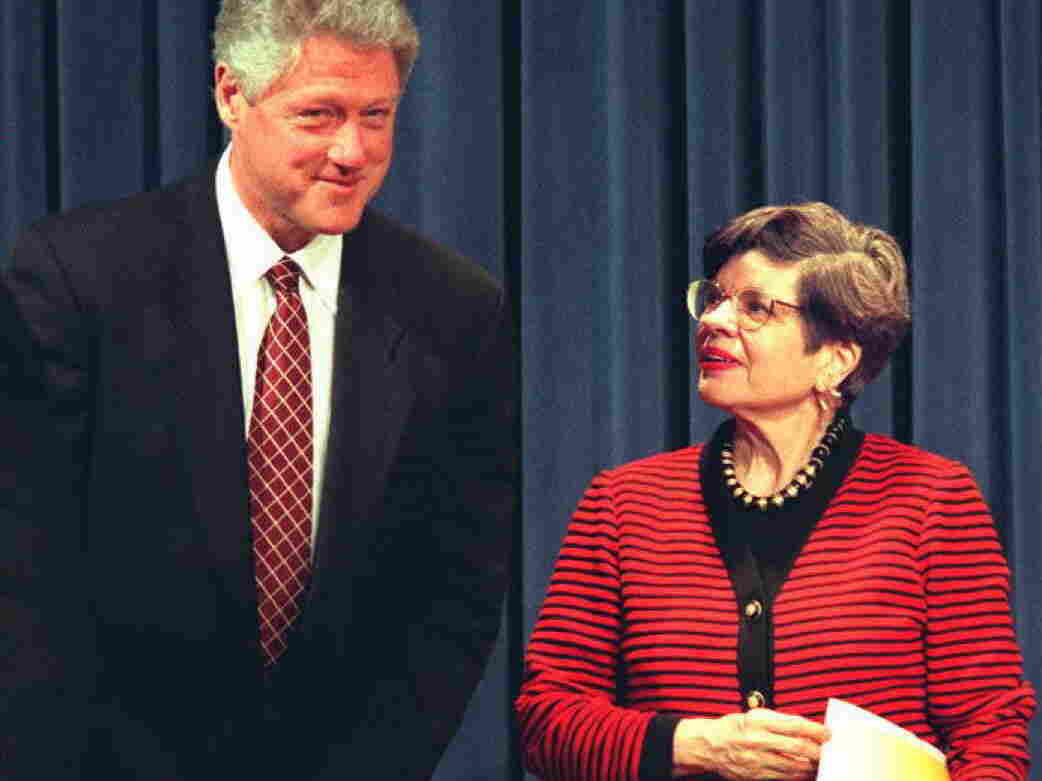 President Bill Clinton stands with Alice Rivlin, director of the U.S. Office of Management and Budget, at the White House on March 19, 1996. Rivlin was the first woman to hold that post. Richard Ellis/AFP/Getty Images hide caption 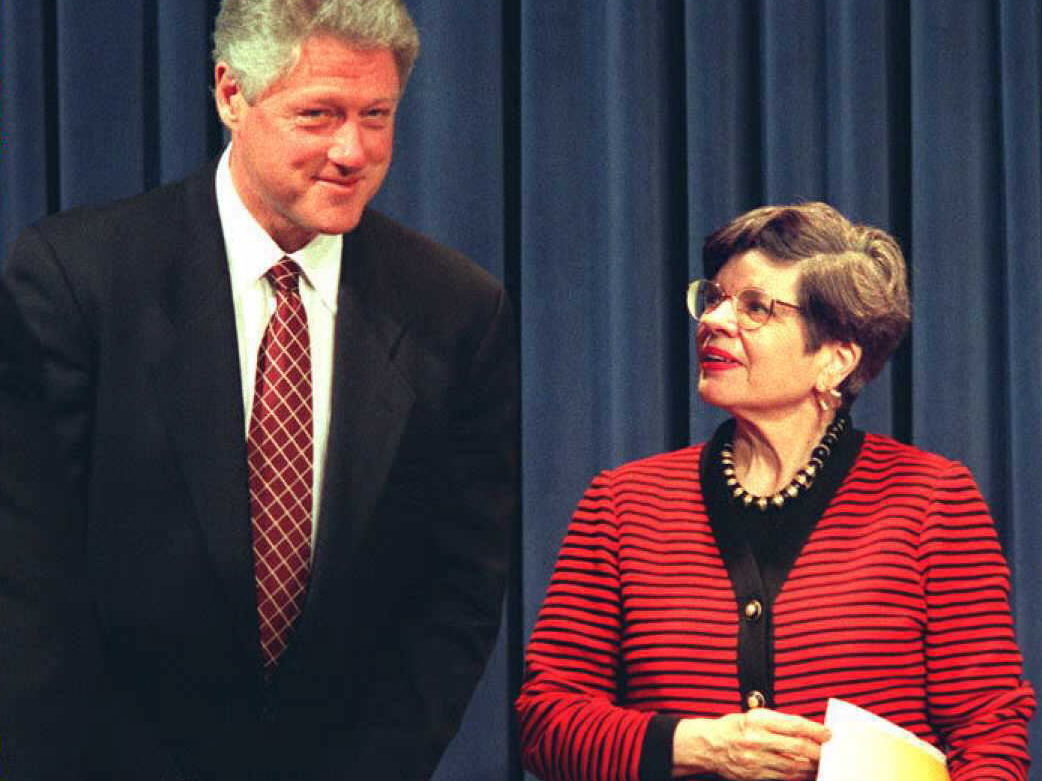 President Bill Clinton stands with Alice Rivlin, director of the U.S. Office of Management and Budget, at the White House on March 19, 1996. Rivlin was the first woman to hold that post.

Alice Rivlin, former President Bill Clinton's budget director who overcame sexism to become the first woman to serve in that role, has died of cancer, the Brookings Institution confirmed Tuesday. She was 88.

Her name may not be widely known outside of Washington, but she had a hand in five decades of the nation's economic policy. At the peak of her power, she was one of the most influential and respected nonelected officials in the country.

Getting there required getting past some of Washington's deeply entrenched prejudices. In 1974, for example, Rivlin had an enviable job opportunity: heading up a new government agency called the Congressional Budget Office.

She was already a respected budget analyst, with an economics Ph.D. from Harvard and policymaking experience in the Johnson administration.

But despite those qualifications, there was a problem:

"The head of the House Budget Committee was actually rather sexist, and he'd been heard to say that over his dead body would a woman have this job," she told NPR's podcast The Indicator in 2018.

But then, a Washington sex scandal changed everything.

"What happened was very bizarre," Rivlin said. "The chairman of the Ways and Means Committee was a very able congressman from Arkansas named Wilbur Mills, and Wilbur Mills had a drinking problem. And one night he was in his car with an exotic dancer named Fanne Foxe. And Fanne for whatever reason leaped out of his car and into the Tidal Basin."

A Washington Post report from the time fills in a few more details — police pulled over Mills' car for speeding and found both Mills and Foxe (real name Annabell Battistella) intoxicated. After they were pulled over, Foxe ran from the car and jumped into the water.

Foxe was fine. Mills left his spot on the Ways and Means Committee. And his spot went to Ullman — the sexist congressman Rivlin first mentioned. Which meant the budget committee got a new, less sexist, chairman, Washington Democrat Brock Adams.

Rivlin paraphrased what Adams told the Senate Budget Committee chair: " 'If you want Rivlin, it's all right with me,' and that's how I got my job. I owed my job to Fanne Foxe."

A series of seemingly chance incidents helped Rivlin get to that post. But her staying power in Washington was a testament to her deep economics knowledge and commitment to giving clear, nonideological answers to maddeningly complex policy questions.

As the founding head of the CBO, she helped change the way Washington makes policy, as she told Vox's Ezra Klein in 2018.

"In the late '60s, we were sending a slew of bills to the Congress often without any analysis of what the effects might be; the idea you could attach credible numbers to these things [was] very new," she said.

That kind of analysis — once so novel — is today one of the most watched aspects of policymaking on Capitol Hill. When a tax bill or health care plan comes out, the CBO score can make or break its chances of passing.

Rivlin served at the CBO for eight years. She then went on to build a distinguished résumé as an economist, winning a MacArthur "genius grant," then serving as president of the American Economics Association.

She also would hold still more top governmental posts. She headed the Office of Management and Budget under President Clinton — the first woman to do so. She was the deputy chair of the Federal Reserve — also the first woman to hold that position.

And Rivlin had earned a reputation for being a deficit hawk, and she went on to be a member of the Simpson-Bowles Commission, an Obama-era group dedicated to reining in the national debt.

That sense of how economics affects people's lives was the reason she chose the field in the first place, during her college days, as she told Vox.

"I became an economist in college. I thought I was a history major. And I still love history," she said. "But when I encountered economics in a first year course, I thought, 'This is really more useful. I can imagine it affecting something.' "

And because of her work in founding the CBO, she ultimately helped Washington policymakers better understand how their decisions affect people.