Accessibility links
In 'A Good American Family,' A Son Details How The Red Scare Upended His Father Pulitzer prize-winning David Maraniss immerses himself in family records and interviews with relatives of others to piece together how his parents paid for supporting communism in their youth.

In 'A Good American Family,' A Son Details How The Red Scare Upended His Father

In 'A Good American Family,' A Son Details How The Red Scare Upended His Father 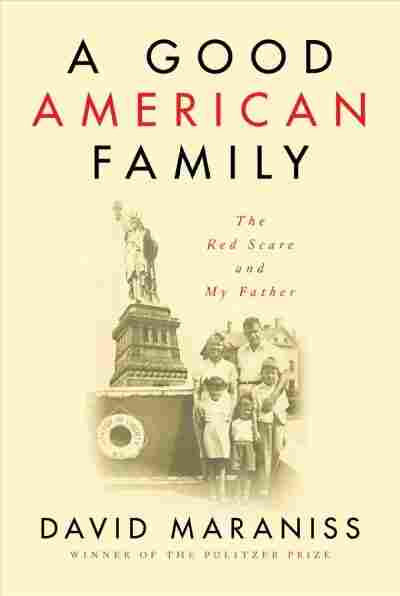 The Red Scare and My Father

On Feb. 29, 1952, a gifted rewrite man at the Detroit Times named Elliott Maraniss received a subpoena from the House Committee on Un-American Activities, which was in town holding hearings on "Communism in the Detroit Area."

His newspaper summarily fired him.

Maraniss' appearance before the committee 12 days later was brief and one-sided. Maraniss refused to say whether he was a member of the Communist Party, citing his Fifth Amendment protection against self-incrimination. He brought a prepared statement defending his patriotism which the committee would not allow him to read.

It left Maraniss essentially unemployable. For five years, he moved his young family from city to city — and one marginal job to another — a pariah, as Wisconsin Sen. Joseph McCarthy and his allies pursued communist subversion real and imagined. In a bit of irony Maraniss ultimately landed a secure job at The Capital Times in Madison, Wisconsin, a newspaper long critical of its U.S. senator.

This footnote to the Red Scare era is the centerpiece of A Good American Family, written by another gifted newsman, David Maraniss, Elliott's son. Maraniss has won two Pulitzer Prizes for his work at The Washington Post and has written best-selling biographies of presidents and sports figures, as well as histories of the 1960s. In this, his 12th book, Maraniss turns his attention to the story of his parents who in their youth were members of the Communist Party USA. The committee took it upon itself to define un-American activity; Maraniss offers his book as a studied rebuttal. He writes:

"To be labeled un-American by the committee meant that you were considered subversive, scary, alien, spineless, spiteful, and disdainful of wholesome American traditions. You probably hated apple pie and baseball, but also had no use for democracy and were intent on the violent overthrow of the government. I knew my father as none of those things... He wanted the reality of American life to live up to the words of the Declaration of Independence and the belief that all men are created equal."

Those long-ago hearings took place in Room 740 of the Detroit Federal Building, a marker which anchors Maraniss' narrative. In a prefatory "Author's Note" he writes: "Think of this story as a wheel. The hearing in Room 740 is the hub where all the spokes connect."

There are a lot of spokes, beginning with Elliott's parents, working class, secular Jewish immigrants from eastern Europe. Elliott grew up in Brooklyn, went to public school and the University of Michigan in Ann Arbor. He was a product of his place and time, when segregation and the Depression led many young people to conclude the American system had failed.

Some, like Elliott, saw the future in the Soviet Union and communism's promise of utopia. He would marry another radical Ann Arbor student, Mary Cummins, a midwesterner who watched the Depression take her father's livelihood as a civil engineer. She and her older brother Bob, also at Ann Arbor, were active members of the local party. Bob and several fellow students would fight against Franco in the Spanish Civil War. Bob returned alive — some did not.

Among the other spokes are the committee chairman, Georgia Democrat John Stephens Wood; committee member Charles E. Potter, Republican of Michigan, who lost both legs in combat in World War II; Frank Tavenner of Virginia, chief counsel to the committee, a lead prosecutor in the war crimes trials in Japan; Bereniece Baldwin, a grandmother, FBI undercover informant in the local Communist Party and the committee's star witness; Elliott's attorney George Crockett, a leading African-American figure in the civil rights movement.

Maraniss profiles them all, immersing himself in archives of every sort, family records and interviews with relatives of those long dead. There are many revelations. Maraniss provides strong evidence that Chairman Wood as a young man was a willing participant in the lynching of Jewish Atlantan Leo Frank. Many of the most ardent anti-communists in Congress were avowed segregationists and racists. Some were elected in the South's white-only primaries, a total disenfranchisement of African-Americans. "All this was tolerated, accepted, enforced," he writes. "None of it was considered un-American activity."

The Detroit hearings went on for two weeks and while most witnesses were berated and silenced, some emerged as heroes. One was Coleman Young, who 22 years later would become Detroit's first African-American mayor. His testimony was a thrilling rebuke to the racism and intolerance of the committee members. "I am fighting against un-American activities such as lynchings and denial of the vote," he said to Rep. Potter. "I am dedicated to that fight and I don't think I must apologize or explain it to anybody, my position on that."

Maraniss found his father's statement — the one he was not allowed to deliver — in a box at the National Archives. It was the statement of a decorated veteran of World War II, "a homeowner, taxpayer, and parent..." He wrote:

"I was taught as a child and in school that the highest responsibility of citizenship is to defend the principles of the U.S. Constitution... This committee reflects no credit on American institutions or ideas.... In this country we have never acquiesced in the proposition that persons could be punished for their beliefs."

Read an excerpt of A Good American Family

The son does not make excuses for his parents' youthful devotion to communism. He respects their commitment to equality and free speech, but writes that he and his siblings are "confounded" by their parents' blindness to the brutality of the Soviet regime and their continued allegiance to the party following the 1939 Molotov-Ribbentrop Pact, which for a time turned the Soviet Union and Nazi Germany into allies. When the hearings took place in Detroit, Americans were fighting and dying in a war with two communist powers, North Korea and China. The Red Scare was often led by opportunists and hypocrites, but for many the scare was real.

A Good American Family: The Red Scare and My Father has an unexpectedly lyrical sweep as it moves from Room 740 to biography and history and back again. The "wheel" of Maraniss' Author's Note is ultimately a deeply patriotic portrait of the first half of the 20th century, a prose poem to America's ideals.

"They were no innocents," writes Maraniss of his parents, "but nor did the fact that they had been communists make them traitors. They never betrayed America and loved it no less than officials who rendered judgement on them in Room 740 of the Federal Building in Detroit."

Mark Katkov is an editor at NPR.