Accessibility links
Alabama Governor Signs Abortion Ban Into Law The law bans nearly all abortions and is among the most restrictive in the country. It's part of a broader anti-abortion strategy to prompt the U.S. Supreme Court to reconsider the right to abortion. 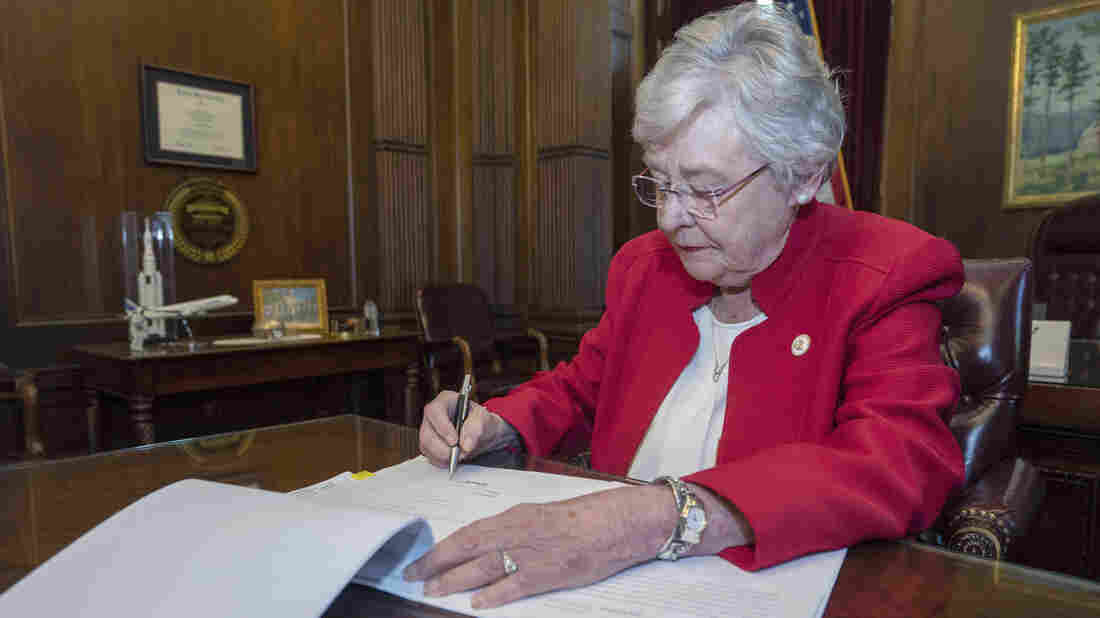 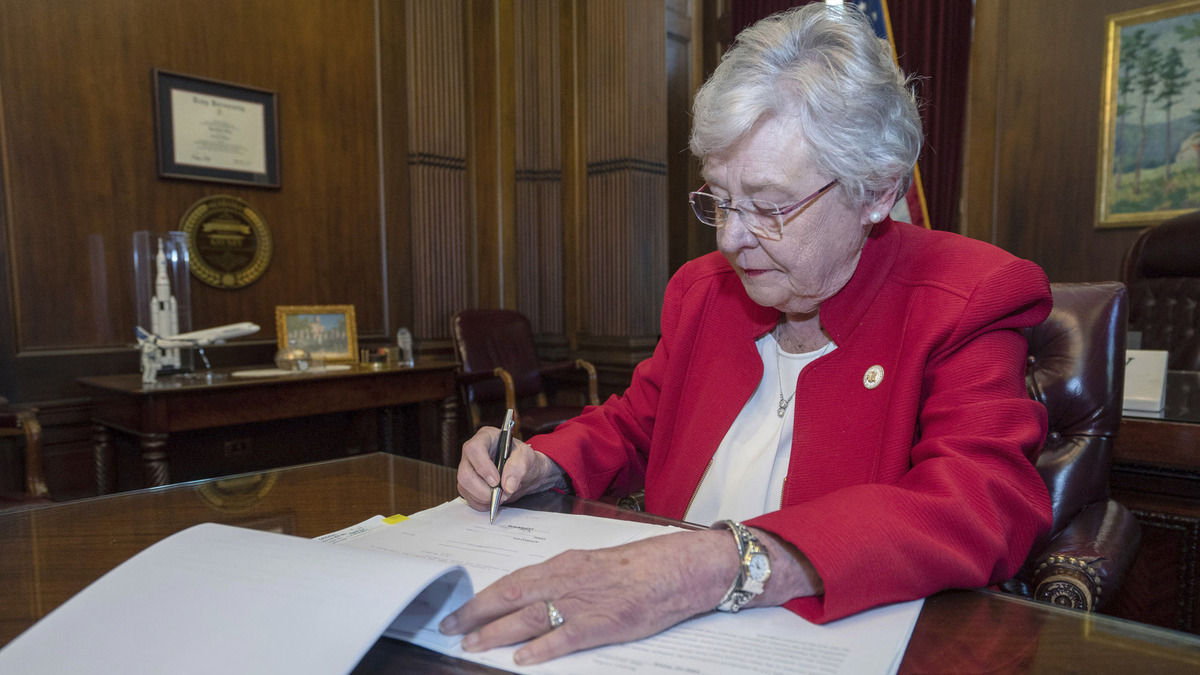 On Wednesday, Alabama Gov. Kay Ivey signed into law a ban on nearly all abortions.

It's considered the most restrictive abortion law in the United States. The law makes it a crime for doctors to perform abortions at any stage of a pregnancy, unless a woman's life is threatened or there is a lethal fetal anomaly.

Under the new law, doctors in the state face felony jail time up to 99 years if convicted. But a woman would not be held criminally liable for having an abortion.

The law does not take effect for several months.

The Alabama Senate passed the bill Tuesday evening. The state House had already overwhelmingly approved the legislation. It's part of a broader anti-abortion strategy to prompt the U.S. Supreme Court to reconsider the right to abortion. 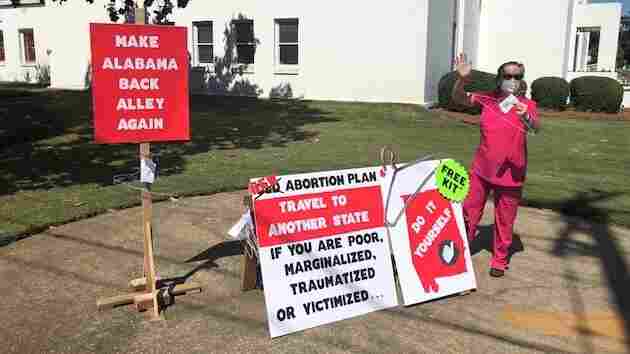 Laura Stiller of Montgomery protests outside the Alabama State House as the Senate debates an abortion ban. Stiller calls the legislation political and an "affront to women's rights." Debbie Elliott/NPR hide caption 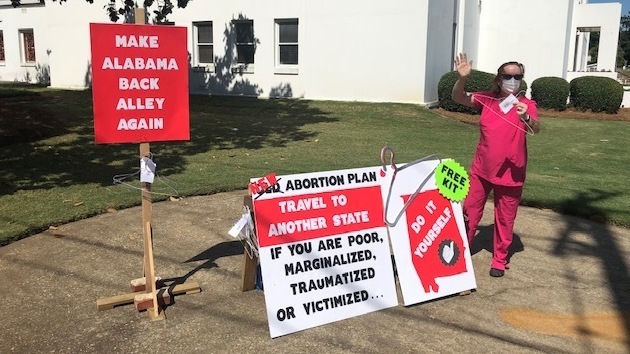 Laura Stiller of Montgomery protests outside the Alabama State House as the Senate debates an abortion ban. Stiller calls the legislation political and an "affront to women's rights."

Sponsors insist they wanted to limit exceptions because the bill is designed to push the idea that a fetus is a person with rights, in a direct challenge to the U.S. Supreme Court's landmark Roe v. Wade decision that established a woman's right to abortion.

"Human life has rights, and when someone takes those rights, that's when we as government have to step in," said Republican Clyde Chambliss, the Senate sponsor of the abortion ban.

The amendment has divided Republicans. Lt. Gov. Will Ainsworth, who presides over the Senate, posted on Twitter that his position is simple — "Abortion is murder." But other Senate leaders have insisted that there be exceptions for rape and incest.

‘Abortion is murder,’ those three simple words sum up my position on an issue that many falsely claim is a complex one. #PassHB314 #NoAmendments pic.twitter.com/NjpYW2wu8T

Democrats didn't have the votes to stop the bill but tried to slow down proceedings during the debate.

Democratic Sen. Vivian Davis Figures questioned why supporters would not want victims of rape or incest to have an exception for a horrific act.

"To take that choice away from that person who had such a traumatic act committed against them, to be left with the residue of that person if you will, to have to bring that child into this world and be reminded of it every single day," Figures said.

The ACLU of Alabama promised to "fight" the new law after it was signed Wednesday evening.

"This bill will not take effect anytime in the near future, and abortion will remain a safe, legal medical procedure at all clinics in Alabama," the organization tweeted Tuesday night, along with a map showing clinic locations in the state.

PLEASE REMEMBER: This bill will not take effect anytime in the near future, and abortion will remain a safe, legal medical procedure at all clinics in Alabama. #mybodymychoice #HB314 pic.twitter.com/vVohsiR5Md

"Abortion is still legal in all 50 states," the ACLU's national organization wrote. "It's true that states have passed laws trying to make abortion a crime, but we will sue in court to make sure none of those laws ever go into effect."

Chipping away at abortion rights

In recent years, conservative states have passed laws that have chipped away at the right to abortion, with stricter regulations including time limits, waiting periods and medical requirements on doctors and clinics. This year state lawmakers are going even further now that there's a conservative majority on the U.S. Supreme Court.

"The strategy here is that we will win," says Alabama Pro-Life Coalition President Eric Johnston, who helped craft the Alabama abortion ban.

"There are a lot of factors and the main one is two new judges that may give the ability to have Roe reviewed," Johnston said. "And Justice Ginsburg — no one knows about her health."

So states are pushing the envelope. Several, including Alabama's neighbors Georgia and Mississippi, have passed laws that prohibit abortion once heartbeat activity can be detected. But the drafters of the Alabama law think by having no threshold other than if a woman is pregnant, their law might be the one ripe for Supreme Court review.

The National Organization for Women denounced the ban's passage.

"This unconstitutional measure would send women in the state back to the dark days of policymakers having control over their bodies, health and lives," the organization said in a statement. "NOW firmly believes that women have the constitutional right to safe, legal, affordable and accessible abortion care and we strongly oppose this bill and the other egregious pieces of legislation that extremist lawmakers are trying to pass in what they claim is an attempt to force the Supreme Court to overturn Roe."