Accessibility links
In Executive Privilege Fight, Precedent Favors Democrats Over Trump Courts have tended to side with Congress when it comes to questions of congressional oversight of the executive branch. House Democrats hope they will again in a confrontation over the Mueller report. 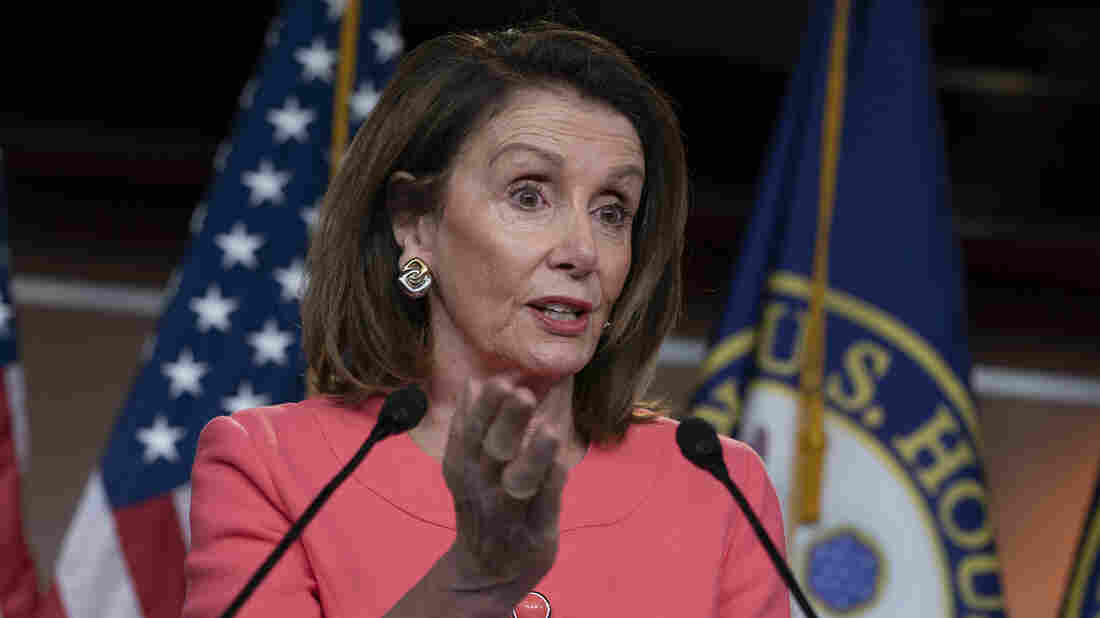 Speaker of the House Nancy Pelosi talks to the media at a news conference on Capitol Hill on May 2. J. Scott Applewhite/AP hide caption 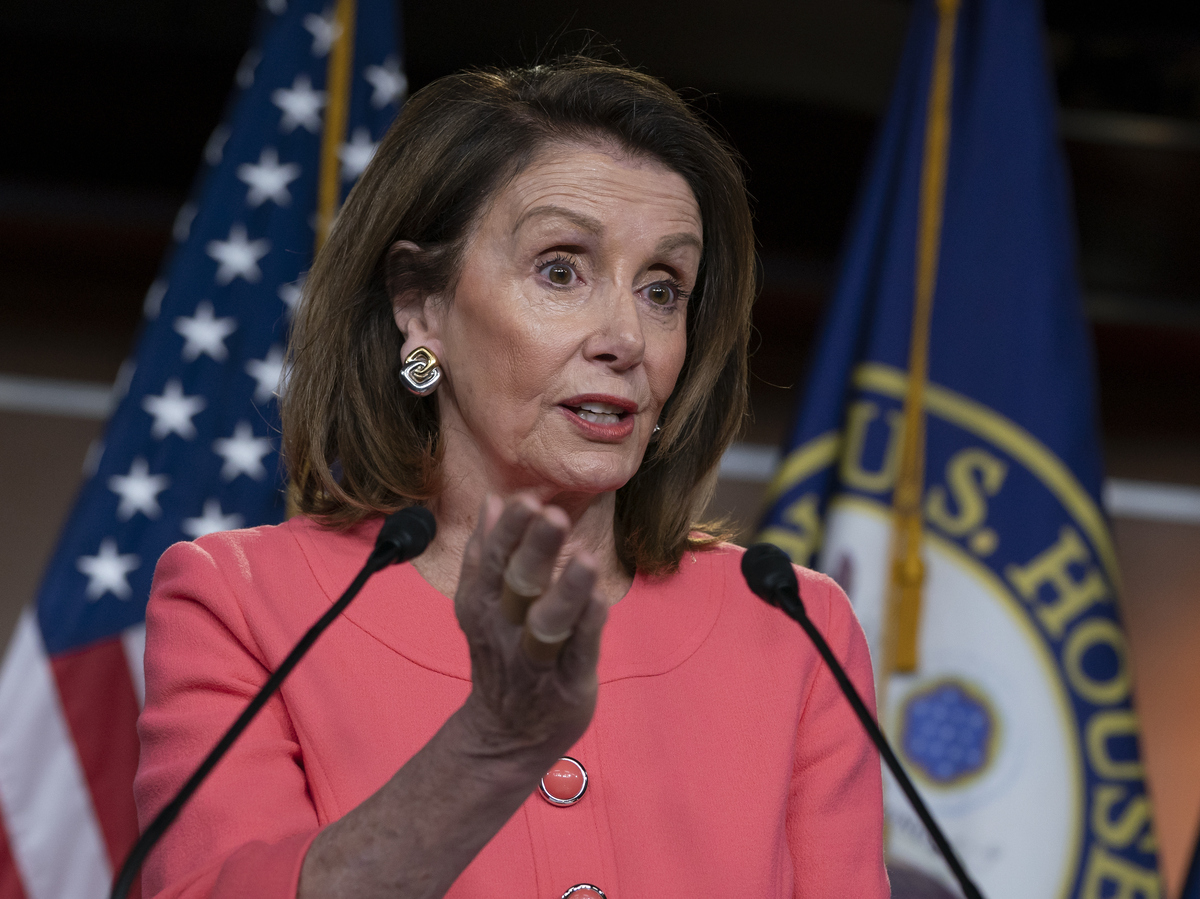 Speaker of the House Nancy Pelosi talks to the media at a news conference on Capitol Hill on May 2.

More than a decade ago, then-Speaker Nancy Pelosi declared victory over the Bush administration in a clash between Congress and the president's assertion of executive privilege to try to block members of his administration from testifying as part of a congressional oversight investigation.

"It's a triumph for the balance of power, checks and balances, the Constitution of the United States," Pelosi said in March 2009.

It's also a road map for Democrats in 2019, as they wage a similar fight now against President Trump and his exertion of executive privilege to block congressional oversight into the conclusions in special counsel Robert Mueller's report on Russian meddling in the 2016 elections.

Rep. Linda Sanchez, D-Calif., was there for both fights. "We knew the argument wouldn't carry the day" [in court] Sanchez told NPR. She was a member of the House Judiciary Committee in 2007, which at the time was trying to conduct oversight into a Bush-era scandal over how a number of U.S. attorneys were fired. Congress wanted to hear from White House Chief of Staff Josh Bolten and White House counsel Harriet Miers, but President George W. Bush exerted executive privilege to circumvent their testimony. The Judiciary Committee, and eventually the House, passed resolutions holding them in contempt and pursued their testimony in civil court challenges.

In July 2008, the D.C. District Court issued a lengthy opinion in Committee on the Judiciary v. Miers that largely rejected the Bush administration's arguments for blanket executive privilege protections and sided decisively with Congress on its authority to conduct oversight. "Congress's power of inquiry is as broad as its power to legislate and lies at the very heart of Congress's constitutional role," the court responded. "Presidential autonomy, such as it is, cannot mean that the Executive's actions are totally insulated from scrutiny by Congress. That would eviscerate the Congress's oversight functions."

Ultimately, Congress got what it wanted: Miers testified, and lawmakers got most of the requested documents. It also happened nearly two years after the start of the legal battle, which presents an increasingly difficult situation for Democrats politically: They might win in court, but it could be years from now.

"It is a little bit disappointing that it takes time to litigate these things in the court," Sanchez said. "My sense is if they want to try to overturn precedent and if takes time, that hopefully the judicial branch will come down very strongly and very clearly so that if you ever find yourself at that crossroads again, people will be forewarned that this is not a good venture to try to disobey what Congress is asking, and the penalty will be swifter and stronger with each case."

House Majority Leader Steny Hoyer, D-Md., downplayed the political stakes of having to wait for the courts to weigh in on Trump's privilege claims. "This is a very fundamental issue, so if it takes a year and a half it's a relatively short period of time in the course of the history of our country," he said. "This issue is beyond politics in the Democratic/Republican partisan sense. It is the politics with a small 'p' of how our democracy effectively represents the American people and prevents a dictator or authoritarian figure to impose his or her will individually on the rest of us. So this is a big issue."

A year and a half would be timely, compared to another recent precedent. House Republicans held former Attorney General Eric Holder in contempt in 2012 and fought him in civil court for documents related to the "Fast and Furious" operation, which involved illegal gun-running in Mexico involving the Bureau of Alcohol, Tobacco, Firearms, and Explosives. Holder declined to do so after President Barack Obama exerted executive privilege over them. In 2013, D.C.. District Court again appeared to side with Congress, echoing the Judiciary v. Miers precedent, but the case was finally settled only last week — with a legally murky conclusion — and more than two years after Obama left office.

The lengthy legal reality is changing the calculus in the House Democratic Caucus about how best to confront the Trump administration, not just over the Mueller report but in all other administration efforts to block congressional oversight, such as the Ways and Means Committee Chairman Richard Neal's request for copies of six years of the president's tax returns. Treasury Secretary Steven Mnuchin declined to comply with the request and is now facing a subpoena from the chairman.

Increasingly, rank-and-file Democrats are talking about beginning an impeachment inquiry since impeachment is a legal proceeding that could give the House a stronger hand in court to get the administration to comply with requests for testimony and documents faster.

There is also ongoing talk of invoking long-dormant inherent contempt powers that authorize Congress to detain and arrest people who do not comply with congressional subpoenas, although that may be politically unfeasible. House Intelligence Chairman Adam Schiff, D-Calif., is making the case instead for imposing fines of up to $25,000 per day for people who don't comply with subpoenas. "That may be an even swifter remedy if we need to embark on it, and we may have to," Schiff told MSNBC.