Accessibility links
'Big Bang Theory' Finale: Writers Bid Farewell To Their 'Surrogate Family' It's a bittersweet ending for the team of writers and creators behind the hit CBS show. Writer Dave Goetsch says he simply cannot bring himself to turn off his daily Google alert for physics news. 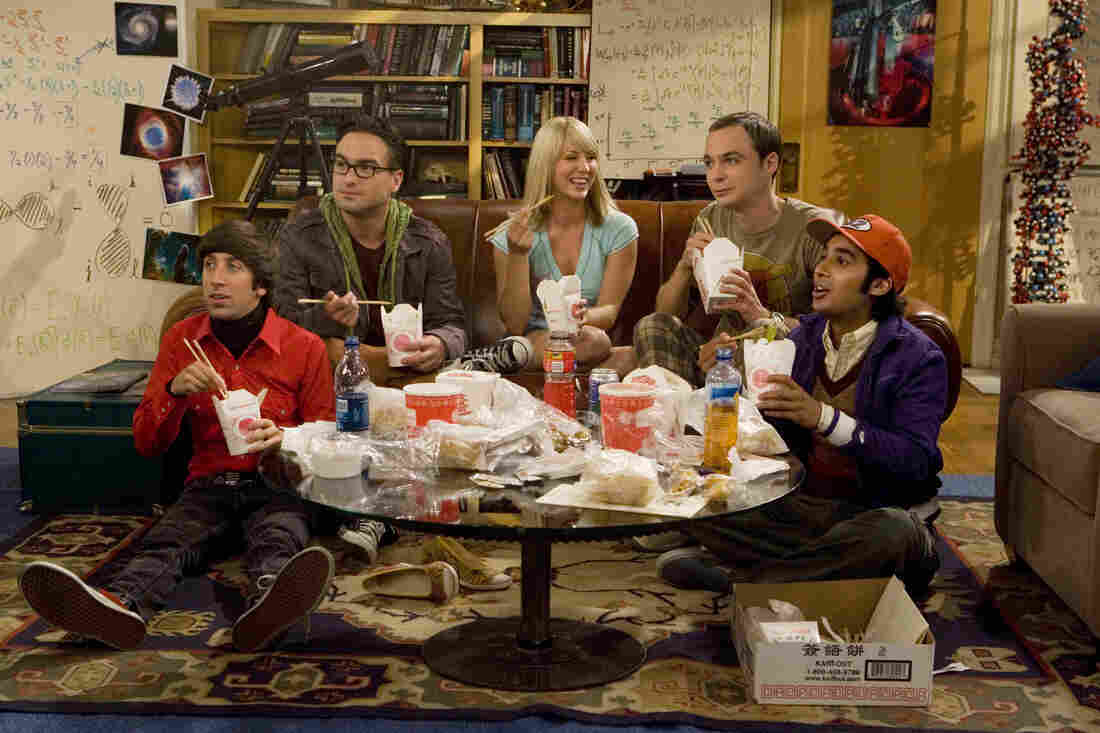 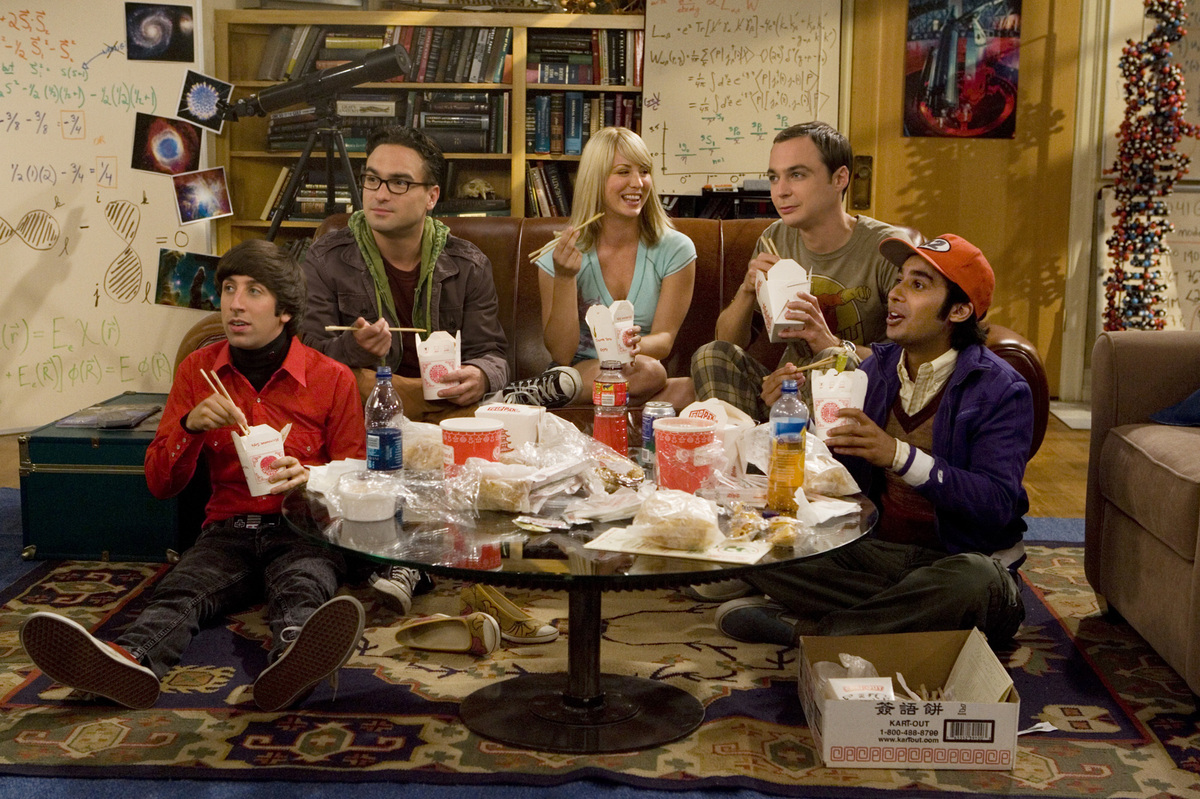 The hit TV show The Big Bang Theory is signing off after a 12 season run – and the show's writers and creators aren't quite ready to say goodbye. For more than a decade, the writers have pitched storylines and traded jabs from their creative space at Warner Bros. studios.

On their long conference table you'll find Star Wars toys, e-mail about the structure of DNA, and the collected work of physicist Richard Feynman. There are Star Trek screensavers on the TV monitors.

The Big Bang Theory was always a show for and about geeks and nerds, and that's why it's worked, says executive producer Chuck Lorre: "The characters were outliers and felt somewhat disenfranchised from the world and clung to each other – they created a surrogate family," Lorre explains. He's proud that the show connected with viewers who didn't always fit in. "This is for the rest of us who weren't the king and queen of the prom," he says.

Lorre co-created the show with Bill Prady, who long ago wrote computer software that he says was "sold in your neighborhood Radio Shack." He talked with Lorre about how brilliant his coworkers were at programming — but how bad they could be interacting with people — women in particular.

Prady knew one programmer who could do amazing calculations in his head but couldn't manage to tip the waiters in a restaurant. When he shared that story, Lorre said, "Hang on, I've never seen that guy on television."

The writers say one of their favorite moments was when Penny gifted Sheldon a napkin from the restaurant where she worked. It was autographed, "To Sheldon: Live Long and Prosper. Leonard Nimoy."

When she apologizes for the napkin being dirty — "He wiped his mouth with it," she explains — Sheldon gasps: "I possess the DNA of Leonard Nimoy!?"

Writer Steve Molaro says this scene was key to the evolution of the show. "That was the first truly electric moment," he says. "You could just feel what we were doing vibrating." 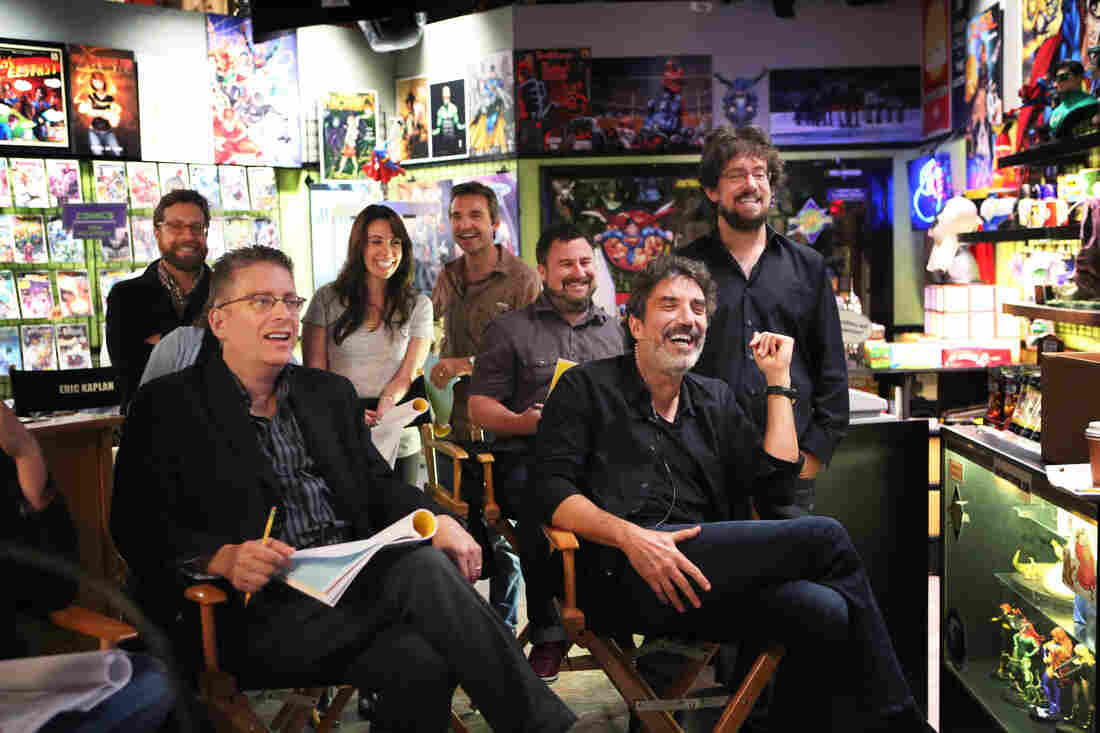 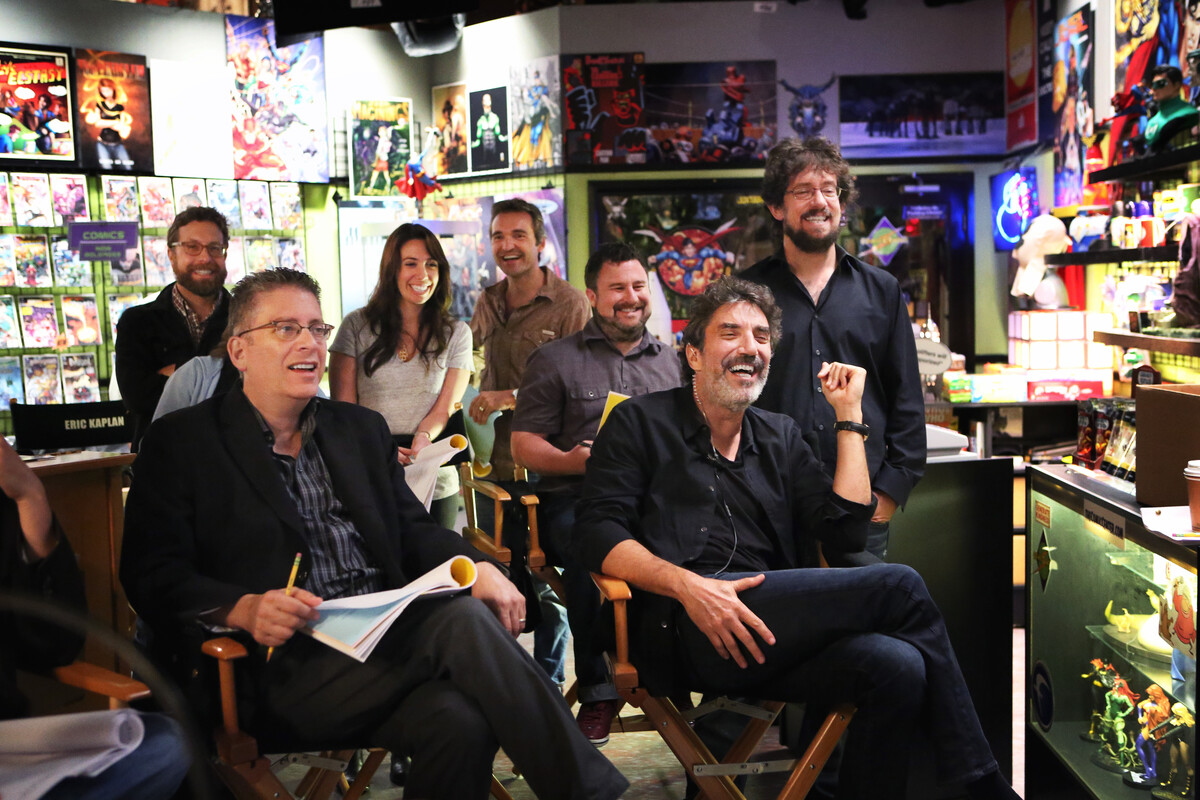 The writers say they also treasured quieter scenes — like the time Sheldon's friends throw him a birthday party and he gets overwhelmed and Penny finds him in the bathroom. She tells Sheldon that years ago, she would never have been friends with someone like him, but now he's one of her favorite people.

"If what you need is to spend your birthday in a bathroom, I'm happy to do it with you," she tells him.

"But everyone will think I'm weird," he says.

"Sweetie," she responds, "You are weird."

Over the years, the show has welcomed appropriately nerdy guest stars: Nobel laureates, astronauts, actors from Star Wars and Star Trek — even physicist Stephen Hawking. The writers took cues from the latest scientific breakthroughs and they regularly consulted with UCLA physicist David Saltzberg to make sure their scripts were scientifically plausible.

"Sometimes you just send him the script with big blank sections to be filled in with appropriate science so that we're not ridiculed," says Lorre.

Writer Steve Holland adds "sometimes, we say things to him like 'Sheldon and Amy need to have a discovery that could be worthy of a Nobel Prize but [it] can't be something anyone else has already thought of. So: go!"

Saltzberg came up with the fictitious theory of "Super Asymmetry," which was sort of a riff on the real-life physics theory of Super Symmetry.

"Theoreticians love symmetrical equations, but the world around us is clearly asymmetrical," Saltzberg says. "What theoretical physicists often do is create a theory with lots of symmetry, but then then break it, to explain our world. ... The brilliance of Amy and Sheldon was to include asymmetry into their theory from the start.'

Saltzberg adds that he hopes a physicist watching the show would at least chuckle — and then think about it seriously. "As for details, I will need to read Amy and Sheldon's publication very closely to tell you more," he says.

Super Asymmetry may made-up, but in 2010, scientists did end up winning a Nobel Prize for research into "graphene" — a subject that was mentioned on a whiteboard in the background of The Big Bang Theory earlier that year. The prize-winning scientist cited the episode in his Nobel lecture.

Most of writers have been together for 12 years, and many are now also executive producers of the show. Maria Ferrari says she'll miss this writing team. "Most jobs, you go off and you write your scripts and then you come back and you punch it up together," she says. "Here, we write it all together. That's the only thing I feel like I know how to do: is write, in this room, for this show. It is so hard to leave it behind."

Bill Prady gets emotional when he talks about how fans have connected with the show — and for him, it's personal. "All of the people who have said that they see themselves in the show because they were outsiders and people who didn't fit in — that was me," he says.

No spoilers for the show's emotional final episode — which airs Thursday on CBS — but no doubt it will end as it all began, with a Big Bang.