Accessibility links
Another Rule Trump Could Break: Primary Challengers Doom Incumbent Presidents The last three sitting presidents to lose reelection — George H.W. Bush, Jimmy Carter and Gerald Ford — all faced strong opponents within their parties. But Trump has strengths they did not. 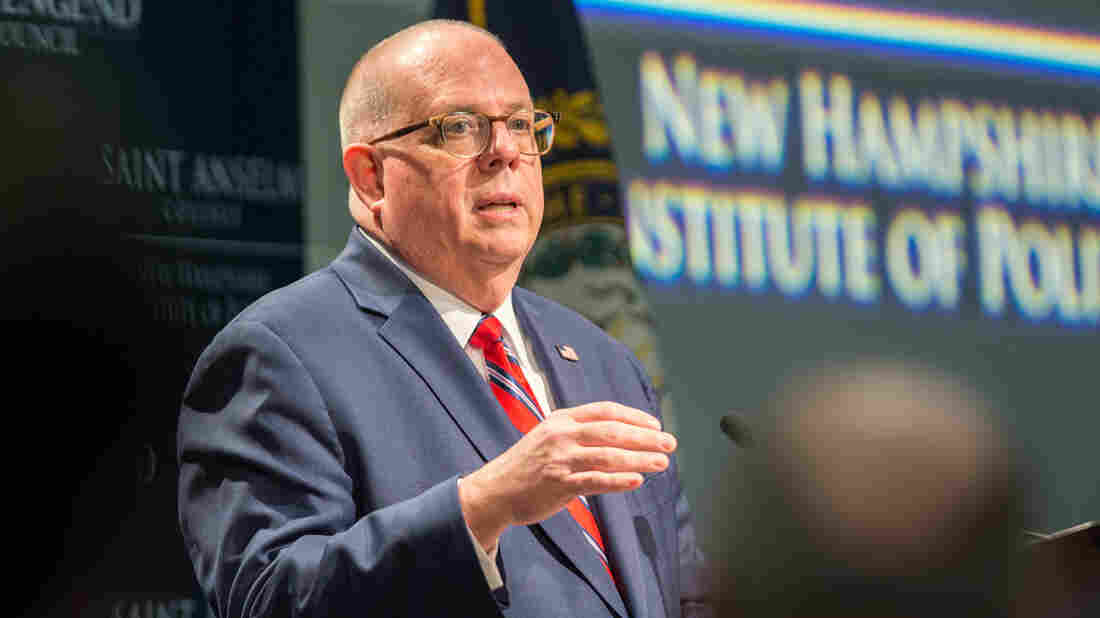 Maryland Gov. Larry Hogan speaks at the New Hampshire Institute of Politics on April 23. The centrist Republican has criticized President Trump and holds open the possibility of challenging him for the GOP nomination in 2020. Scott Eisen/Getty Images hide caption 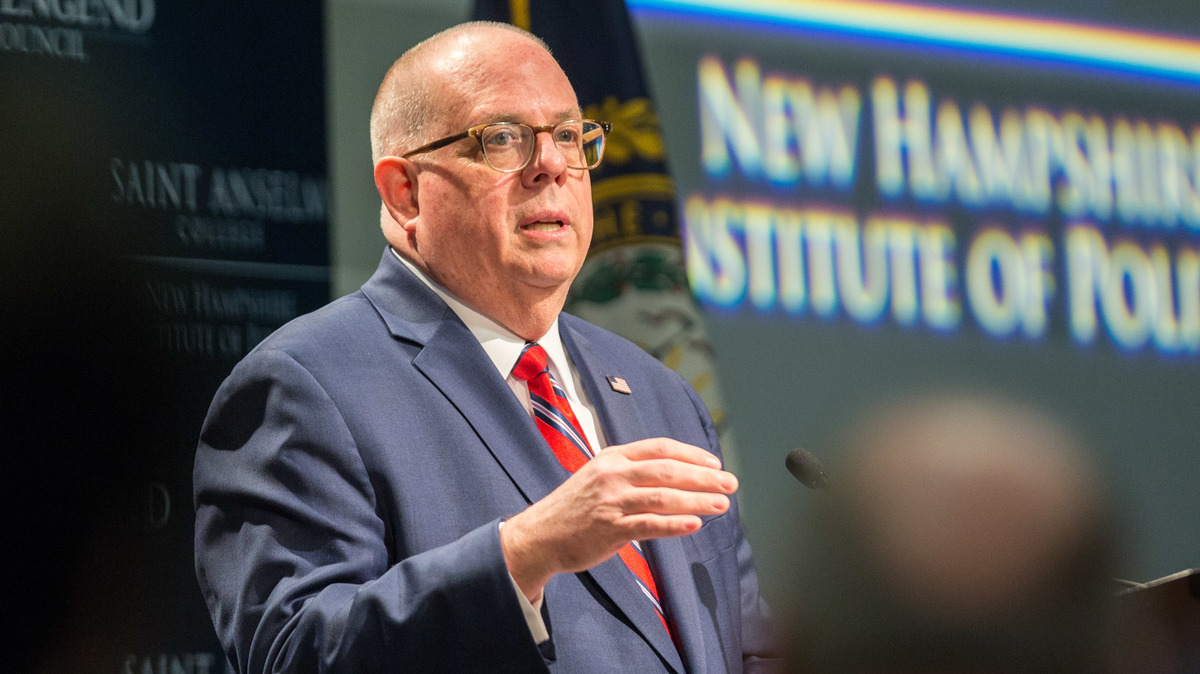 Maryland Gov. Larry Hogan speaks at the New Hampshire Institute of Politics on April 23. The centrist Republican has criticized President Trump and holds open the possibility of challenging him for the GOP nomination in 2020.

An incumbent president with a middling approval rating and mounting controversies is usually an easy draw for primary challengers.

Look to Gerald Ford, Jimmy Carter and George H.W. Bush. All three presidents survived intraparty battles, but those primary fights left their reelection campaigns so hobbled — exposing longstanding weaknesses with their bases — that each went on to lose out on four more years in the White House.

But even if a viable GOP challenger to President Trump does emerge, it's unlikely he or she could make much headway or have a lasting impact on the president's chances in November. That's because Trump's firm grasp on the Republican Party could help him emerge not only victorious, but relatively unscathed by a primary challenge.

Political polarization is higher than ever, according to Princeton University professor of history and public affairs Julian Zelizer. And the slice of the electorate that likes Trump isn't budging, no matter what the president may say or do. Meanwhile, those who don't like him are resolute in their disdain, leaving a smaller block of persuadable voters than there were in previous elections.

"Trump has essentially remade the Republican Party in his image," said Zelizer. "So many people aren't going to believe anything that the Mueller report says, and they take whatever Trump says as gospel. That just to me is another stumbling block that you probably didn't have in a post-Watergate era."

In 1976, President Gerald Ford was already in a debilitated position. The Republican was an incumbent that had never been elected president (or even vice president) and was uniquely challenged in the aftermath of the Watergate scandal, President Richard Nixon's resignation and his own subsequent controversial pardon of Nixon. So it's not surprising former California Gov. Ronald Reagan mounted a near-upset bid against him.

During the primaries, momentum swung back and forth between the two GOP candidates. The first ballot of voting at the 1976 Republican National Convention was razor-thin: 1,187 delegates for Ford and 1,070 for Reagan, just a 117 vote difference. But Ford did narrowly clear the 1,130 delegates needed to secure the nomination. Such a fractious ending would prove prescient months later as he lost to former Georgia Gov. Jimmy Carter, netting 240 electoral votes to the Democrat's 297. 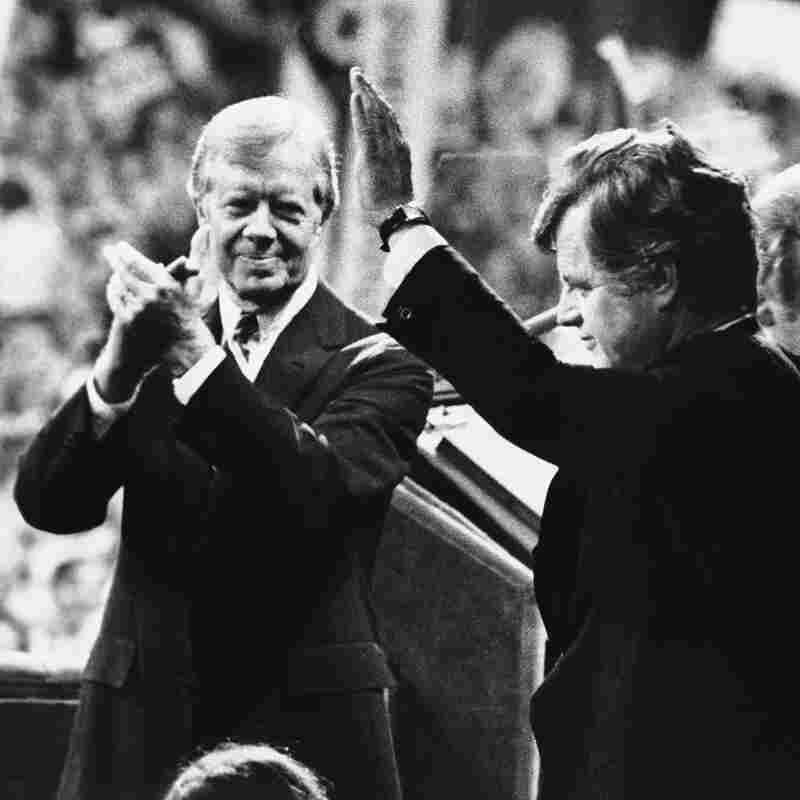 Four years later amid a sagging economy and the hostage crisis in Iran, Carter himself would be hamstrung as he sought a second term. Massachusetts Sen. Edward Kennedy, whose brothers had both sought the presidency, saw an opening. But despite strong numbers at the outset of the primary, Kennedy would peter out as his personal scandals surfaced and Carter simply out-organized him. Their fight would continue through 1980 Democratic convention though, where Kennedy, having finished with just over a third of the primary votes, admitted he couldn't win.

The famous not-really-a-concession speech Kennedy gave at the New York City convention laid out his own idealistic vision rather than trying to boost Carter.

"For me, a few hours ago, this campaign came to an end," the political scion told the crowd. "For all those whose cares have been our concern, the work goes on. The cause endures. The hope still lives. And the dream shall never die."

As a result, it was Kennedy who got the raucous applause and seemed like the hero of the 1980 DNC, not the incumbent president who had actually won the nomination. Facing a renewed Reagan in the general election, Carter was walloped, winning just 49 electoral votes to the Republican's 489. 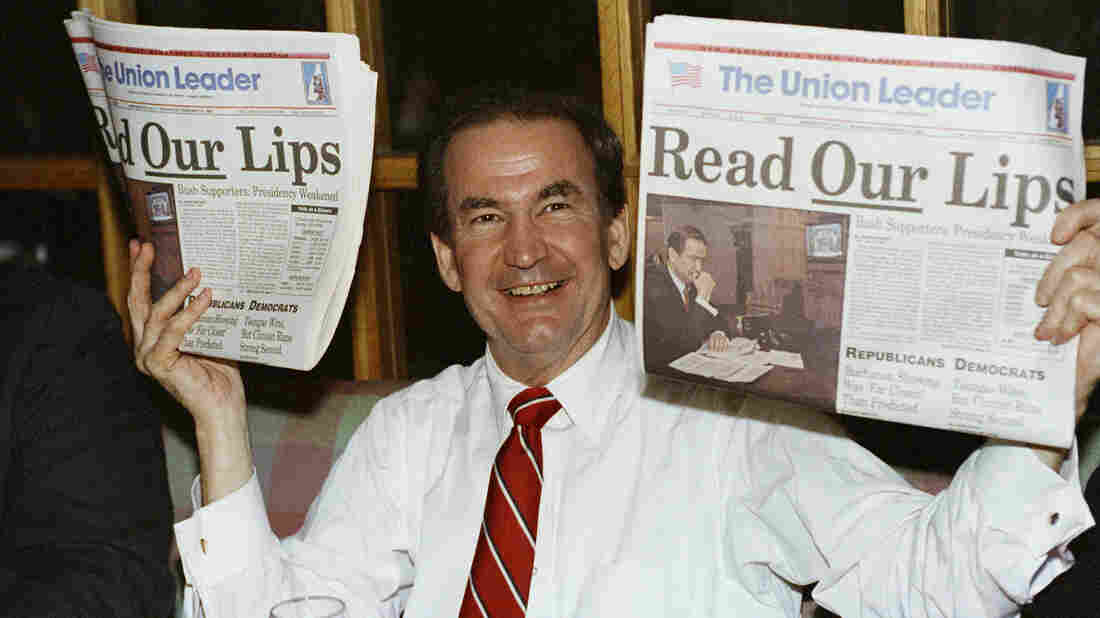 After claiming over one-third of the vote in the 1992 New Hampshire GOP primary, candidate Pat Buchanan holds up copies of a local newspaper with a headline evoking a broken campaign promise of incumbent Republican President George H.W. Bush. Pat Sullivan/ASSOCIATED PRESS hide caption 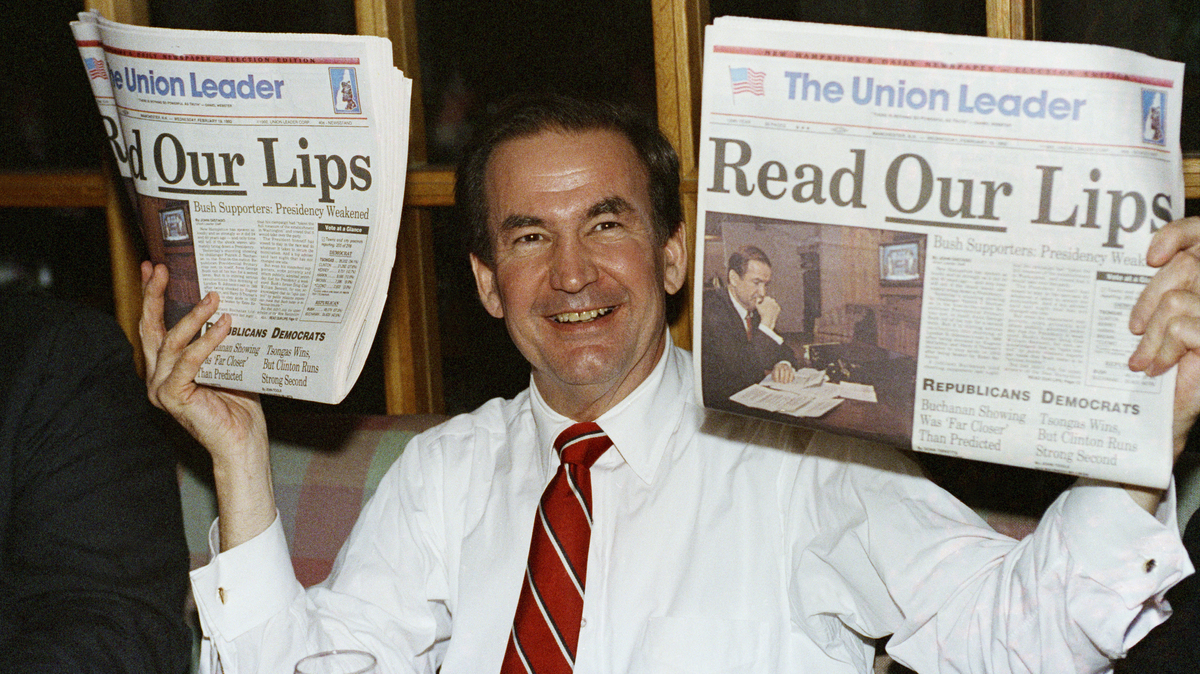 After claiming over one-third of the vote in the 1992 New Hampshire GOP primary, candidate Pat Buchanan holds up copies of a local newspaper with a headline evoking a broken campaign promise of incumbent Republican President George H.W. Bush.

Perhaps it's President George H.W. Bush's re-election battle that best foreshadowed the era of Trump. The former vice president and CIA director saw sky high approval numbers in the aftermath of the Gulf War. But the economy would slow, giving conservative commentator Pat Buchanan a divide he could exploit by waging a bid based on fighting the "culture wars."

Buchanan would falter and end up taking less than a quarter of the primary vote away from Bush, and billionaire Ross Perot running as an independent in the general election also deeply harmed the incumbent's chances. But there was an anti-establishment vein within the GOP Buchanan may have helped awaken. It might have taken decades to fully manifest, but many saw Trump as the eventual embodiment of what Buchanan helped to shape.

Trump seems to have a stronghold on his party that no candidate can shake. As Barbara Perry, director of presidential studies at the University of Virginia's Miller Center put it, Trump has simply proven, time and time again, "that all previous rules do not apply."

"When we look back at the lessons of history, they may repeat themselves, but they haven't so far," Perry said. "He may get a challenge by either a strong gadfly or a strong personality or a strong presence in the party," just as Ronald Reagan was to Ford in 1976 and Ted Kennedy was to Carter in 1980. "But I don't see that person on the horizon."

There are some possible challengers emerging to Trump, but Perry is right that less than nine months before the nominating process begins, no Republican has stood out as a formidable alternative.

Former Massachusetts Gov. Bill Weld is the only major announced candidate so far after running for vice president on the Libertarian Party ticket in 2016 along with former New Mexico Gov. Gary Johnson. But Weld certainly doesn't seem to have the heft of past White House challengers that could irrevocably damage a sitting president.

Some of the potential heavyweights who are still mulling bids include former Ohio Gov. John Kasich, who also sought the GOP nomination last time, and popular centrist Maryland Gov. Larry Hogan, who's already made some early state moves.

Frequent Trump agitators like former Arizona Sen. Jeff Flake and former Tennessee Sen. Bob Corker were also floated early on. Flake has since ruled out a 2020 run, but the recently retired Corker still sounds open, saying recently that Trump "purposely seeks to divide" the American people and someone should challenge him.

"Philosophically, you could look at it and say that it would be a good thing for our country should that occur," Corker said during the TIME 100 Summit last month. "If you had a real primary, where you had someone that was really being listened to, and of substance, things that we were talking about — and I could go through a list of them — they would actually be debated in a real way."

There might once have been other names on that list — prominent 2016 doubters like South Carolina Sen. Lindsey Graham or former South Carolina Gov. Nikki Haley. Despite their blistering criticism almost four years ago toward the polarizing reality TV show host and businessman, they too have come around and been loyal allies of Trump in the case of Graham, or a onetime part of his administration, with Haley serving as UN ambassador until last year.

The president's poll numbers reflect the waning influence of the once vocal critics may have had within the party — winning over converts, even if he may have polarized more independent voters.

The most recent NBC News/Wall Street Journal survey shows a staggering 90 percent of Republicans approve of the job Trump has done, leaving little room for a challenger to grab a foothold. And for now, there's no GOP option who seems like they could truly compete with Trump, given the unprecedented way he has tried to centralize the Republican National Committee around his re-election bid and ward off a primary challenge.

Tribalism is a force that Corker also lamented, saying at the TIME event that Trump "has an unusually visceral contact with the Republican base as it's made up today... That's in some ways where the electorate is today, where it has become very tribal in nature."