Accessibility links
CFPB's Kraninger Says Education Department Is Blocking Student Loan Oversight The Consumer Financial Protection Bureau's Kathy Kraninger says the department is getting in the way of efforts to police the student loan industry. The revelation comes in a letter obtained by NPR. 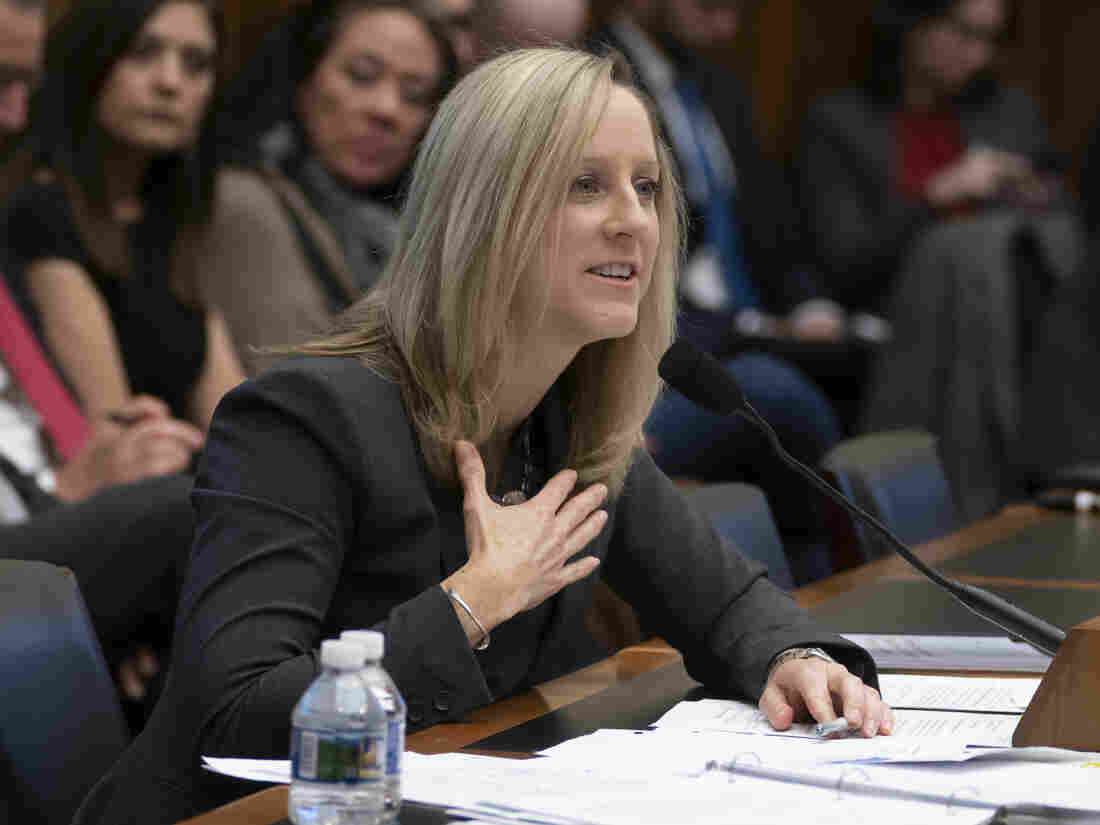 Kathy Kraninger, director of the Consumer Financial Protection Bureau, says in a letter that the Department of Education is getting in the way of efforts to police the student loan industry. J. Scott Applewhite/AP hide caption 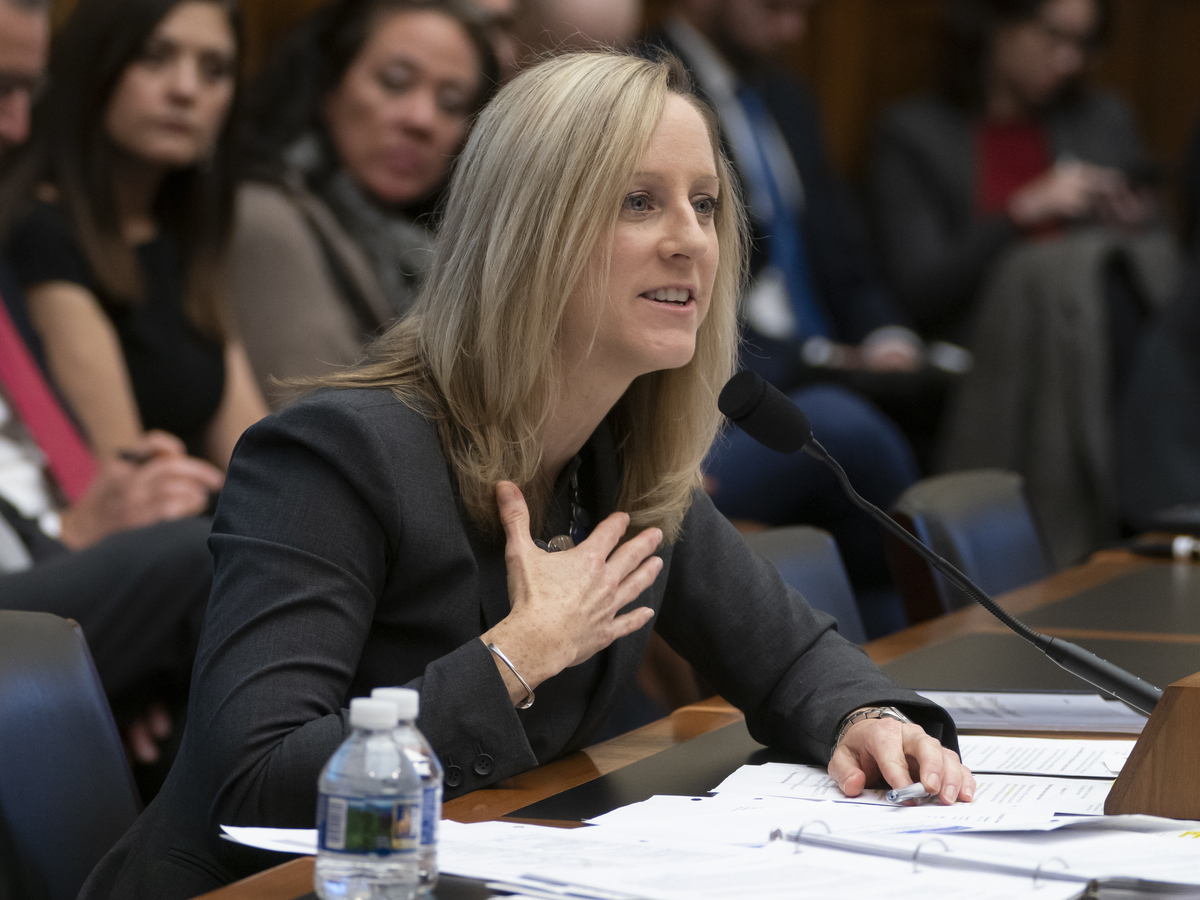 Kathy Kraninger, director of the Consumer Financial Protection Bureau, says in a letter that the Department of Education is getting in the way of efforts to police the student loan industry.

The director of the Consumer Financial Protection Bureau says the Trump administration's Education Department is getting in the way of efforts to police the student loan industry. The revelation, in a letter obtained by NPR, comes at the same time that lawsuits allege that widespread wrongdoing by student loan companies is costing some borrowers thousands of dollars.

CFPB Director Kathy Kraninger explained the problem in an April letter responding to questions from Sen. Elizabeth Warren and other lawmakers about whether the federal regulator had "abandoned its supervision and enforcement activities" related to more than $1 trillion in student loans.

A central issue is that companies that manage student loans, known as student loan servicers, are refusing to share information that the CFPB says it needs to perform proper oversight.

"Since December 2017," Kraninger wrote in the letter, "student loan servicers have declined to produce information requested by the Bureau for supervisory examinations" related to federal student loans.

She said servicers are not sharing the information because the Department of Education has issued guidance telling them not to do so, citing "privacy" concerns. Kraninger also said that information from student loan servicers is "necessary for supervisory examinations."

The letter is a carefully worded response to senators' questions. But Kraninger, a Trump administration appointee, is in essence saying that the CFPB is trying to do its job protecting student borrowers and supervising loan servicing companies, but the Education Department is getting in the way.

"It's actually quite remarkable," says Seth Frotman, executive director of the nonprofit Student Borrower Protection Center. "The head of the Consumer Financial Protection Bureau is telling the world that the secretary of education has put in place a series of policies that are obstructing federal law enforcement officials from standing up for the millions of Americans with student debt."

Now Kraninger, the administration's hand-picked director for the bureau, is pointing the finger, albeit in a less dramatic way, at the Education Department for hindering efforts to protect student borrowers.

The Department Of Education Cuts Off A Student Loan Watchdog

In response to Kraninger's letter, Elizabeth Warren, Sherrod Brown, and three other Democratic senators called the revelations "disturbing" in a round of letters they fired off this week to loan servicing companies.

The lawmakers say in their letters that since Kraninger says the CFPB has attempted to get documents it needs for supervision and been rebuffed by the servicers, that "reveals that the Department under Secretary DeVos, has removed the most potent weapon from the CFPB's arsenal to fight illegal behavior and mistreatment of borrowers by student loan servicers, and that federal student loan servicers, who are paid by the federal government, are ignoring federal regulators' requests for information."

The senators' letters add that no "guidance" from the Department of Education "can absolve servicers of their legal responsibility to comply with state and federal consumer protection law."

When Jessica Saint-Paul heard about a program called Public Service Loan Forgiveness, she was ecstatic. For borrowers who work in qualifying public service jobs — such as police officers, government workers, people who work at nonprofit organizations — the program promises that if they make loan payments for 10 years, the remainder of their student debt will be forgiven. Saint-Paul had about $80,000 in student loans and she wasn't making much money working for a nonprofit that provides services to foster children.

"I was just like, 'Oh, this is perfect,' " Saint-Paul says. So she called the company that was servicing her student loans and says she was told she was all set — after 10 years, she should be eligible to get her loans forgiven. That was nine years ago.

Saint-Paul said she called back over the years, including once when she changed nonprofit jobs in 2014, to say, "just making sure I'm on track." She says she was told, " 'OK, no problem.' The conversation was quick; they were so kind."

The call center workers might have been friendly, but Saint-Paul says she was getting bad information. She says she found that out just last year at a conference she attended. There was an information session on loan forgiveness, and she was told she was in the wrong kind of loan and wrong payment plan so she couldn't qualify. She says many other people were finding out the same thing alongside her at the conference.

"It was like a support group almost it turned into because people were like, 'No, that can't be true,' " Saint-Paul says. "I went on my phone, people were on their laptops checking what kind of loan they were in. We were all sitting there just frantic."

Saint-Paul says that if nine years ago her loan servicer had just told her to convert to the right loan and payment plan, everything would have been OK. Instead, she says she feels as though someone stole tens of thousands of dollars from her.

"I just cannot believe this happened to me," she says. "That's like criminal, it's not right."

Many people agree that it's not right — regulators and advocacy groups are filing a growing number of lawsuits against loan servicing companies alleging mishandling of the loan forgiveness program. Saint-Paul is a plaintiff in one of them.

Many of the consumer complaints and lawsuits involve allegations that servicing companies gave borrowers bad information or advice that resulted in them thinking they were getting credit toward loan forgiveness, when in fact they were in the wrong loan or payment plan.

The Education Department revealed late last year that about 99% of borrowers who thought they had reached that 10-year milestone and applied for forgiveness were rejected. More than 1 million people are actively pursuing loan forgiveness under the program and hoping to qualify.

That's why Democratic lawmakers say they want to make sure that perhaps the most powerful watchdog — the CFPB — is on top of all this.

Fears that the watchdog has been asleep

Since 2011, the CFPB has monitored loan servicers, lenders and complaints from student borrowers and brought enforcement actions when it discovered wrongdoing. For example, the CFPB in 2015 returned $480 million to allegedly defrauded students of Corinthian Colleges.

In 2017, the CFPB brought a lawsuit against one of the nation's largest student loan servicers, Navient. The bureau said Navient "created obstacles to repayment by providing bad information, processing payments incorrectly, and failing to act when borrowers complained. Through shortcuts and deception, the company also illegally cheated many struggling borrowers out of their rights to lower repayments, which caused them to pay much more than they had to for their loans." That lawsuit is ongoing.

Navient disputes the allegations in the CFPB lawsuit and other suits brought by state regulators. "The allegations made in the claims are unfounded, and we are vigorously defending our record in court," a Navient spokesman says.

But since Richard Cordray, the bureau's Obama-era director, stepped down in November 2017, consumer advocates have been worried that the Trump-appointed interim director, Mick Mulvaney, and now the permanent director, Kraninger, have backed away from protecting student borrowers.

But in her letter, Kraninger said the consumer protection bureau takes that job seriously.

"As with all industries subject to the Bureau's supervisory or enforcement authority, the Bureau will continue to monitor those subject to its authority — in this case, student lenders and student loan servicers — to ensure they are complying with the law," she wrote.

At the same time, Kraninger also explained that the Education Department has created obstacles that are getting in the way of the CFPB doing its job. In addition to the guidance to student loan servicers that is impeding oversight efforts, back in 2017, the Trump administration's Education Department ended information sharing agreements that it had with the CFPB. In her letter, Kraninger said an information-sharing agreement (called a Memorandum of Understanding) is required under law and it is "a priority" for the bureau to get a new one in place.

Some advocates say the CFPB should do more than acknowledge such problems in a letter to lawmakers. Frotman, of the Student Borrower Protection Center, says the bureau has broad powers to compel student loan servicing companies to turn over the information it needs about student loans and student borrowers.

"I think just identifying this fact is of little solace to student loan borrowers who desperately need the help of a consumer financial watchdog that is supposed to be independent," Frotman says. He says he'd like to see Kraninger more directly demand that the Education Department change its guidance to loan servicers and tell them to cooperate with regulators. The CFPB could also take loan servicers to court to get the information it needs., Frotman says.

In a statement to NPR, the CFPB said: "The Bureau continues to supervise the student loan market, as well as taking action against those who fail to comply with the law." And the bureau says it is confident it can resolve the issues to achieve its mission of protecting borrowers.

But for its part the Education Department appears to be defending its stance — that loan servicers not hand over information to the CFPB. The department says in a statement that it takes privacy seriously along with the need to "protect customers' personal data." It says requests for information about student loan borrowers should be made to the department.

The attorneys general said "student loan information is vital to our efforts to protect consumers from illegal, unfair, abusive, or deceptive practices by actors in the higher education industry, in which the Department historically has been an important partner. However, the Department's policy reversal impedes states' ability to enforce the law and shields unprincipled industry actors from regulatory enforcement, harming student loan borrowers nationwide."

The industry group the Student Loan Servicing Alliance told NPR in a statement, "As contractors of the Department of Education which owns its federal student loan data, federal servicers must follow federal law and ED guidance on disclosure and data sharing."

It's not clear why the department is blocking state and federal regulators from getting information from servicers to do oversight presumably aimed at protecting the rights of student borrowers.

Jason Delisle, a fellow at the conservative-leaning American Enterprise Institute, says there may be a turf war going on here. Even if a particular student loan program has problems, Delisle says the department may feel, "this is our program and we're designing it the way we want to design it and we're running it the way we want to run it." And Delisle says if there are problems the department may feel it can sort them out by itself.

Frotman says that's not the issue. He says the Education Department may not like having regulators looking into alleged wrongdoing within the companies managing its loan programs, but "this isn't about reasonable disagreements, it is about following the law versus obstructing law enforcement."