Accessibility links
Massachusetts Same-Sex-Marriage Anniversary: How Making History Unmade A Family Fifteen years ago, Hillary and Julie Goodridge married hours after Massachusetts became the first state to allow same-sex marriage. But less than five years later, they were getting divorced. 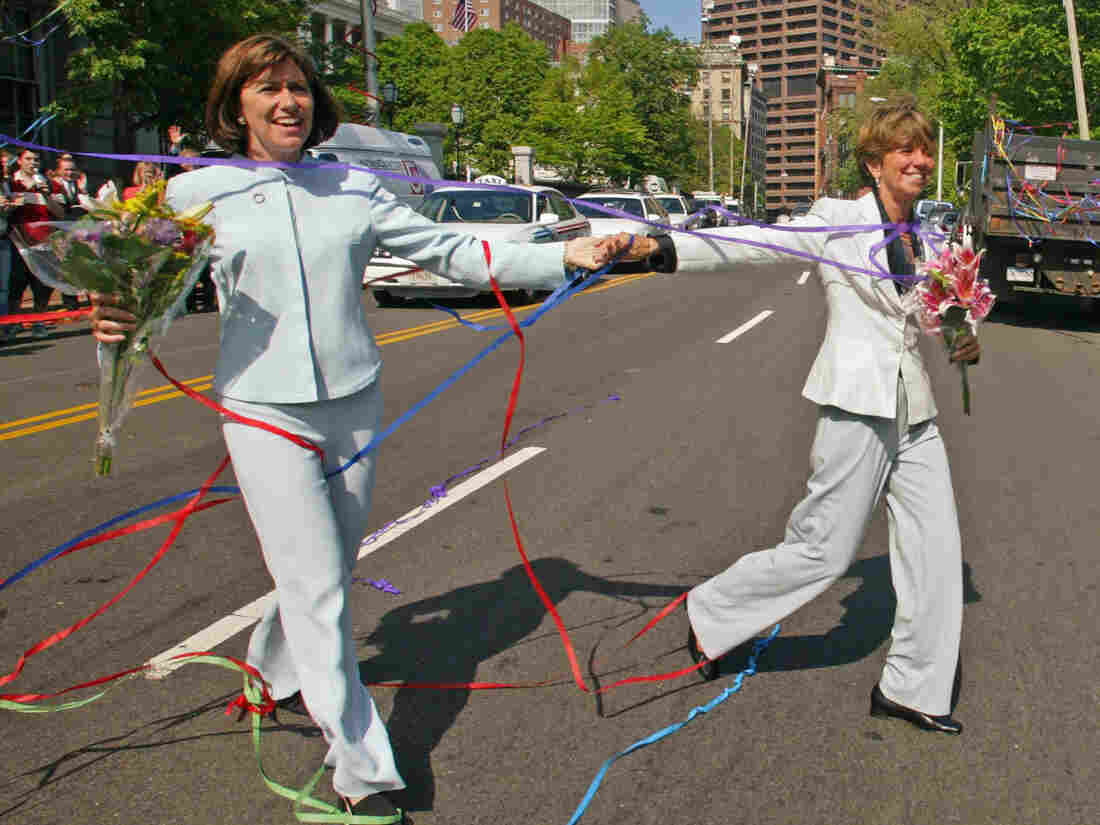 Julie Goodridge (left) and Hillary Goodridge were the face of the movement to legalize same-sex marriage in Massachusetts. They got married on May 17, 2004, just hours after that state became the first in America to allow same-sex marriage. Winslow Townson/AP hide caption 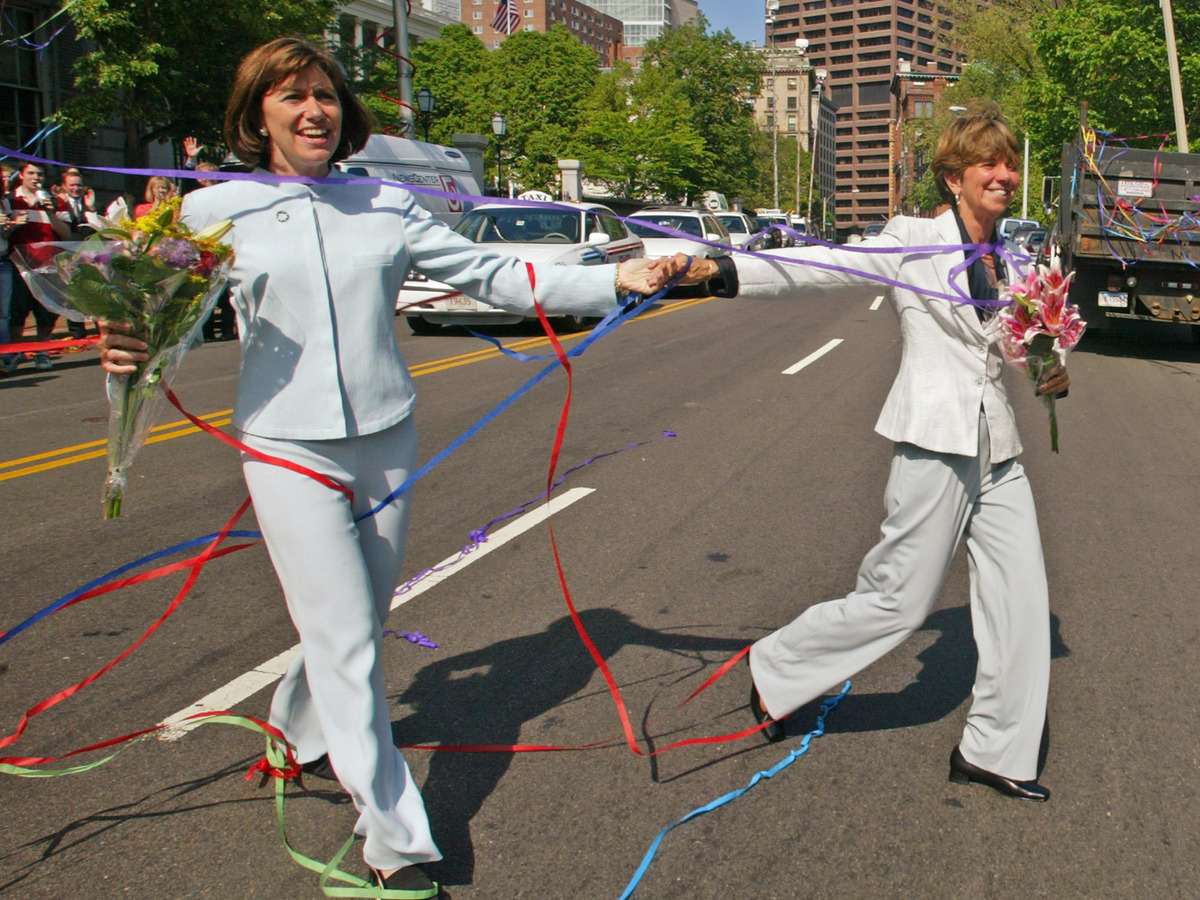 Julie Goodridge (left) and Hillary Goodridge were the face of the movement to legalize same-sex marriage in Massachusetts. They got married on May 17, 2004, just hours after that state became the first in America to allow same-sex marriage.

In pastel suits, with broad smiles and colorful streamers, they exchanged vows and rings just hours after Massachusetts became the first state in America to allow same-sex marriage.

The Goodridges were the face of the movement. The lawsuit that made gay and lesbian marriages a reality bears their name: Goodridge v. Department of Public Health. Historians often divide the equal-marriage movement into "before Goodridge" and "after Goodridge."

But less than five years later, they were getting divorced. In winning the right to marry, they lost their own marriage.

Now, Hillary, Julie and their daughter, Annie Goodridge, are speaking more candidly about the entirety of their experience.

"If you look at any interview that we've done, we've never talked about the trauma," says Julie Goodridge. "But I think that it's important to tell the full story."

The making of a family

Many years into their relationship but long before Hillary and Julie were involved in any court case, they were dreaming about having a child.

Because they were a lesbian couple, marriage was forbidden. But they wanted to do something to mark that they were a family. So, they say, they dug through their family trees and picked a common last name: Goodridge. 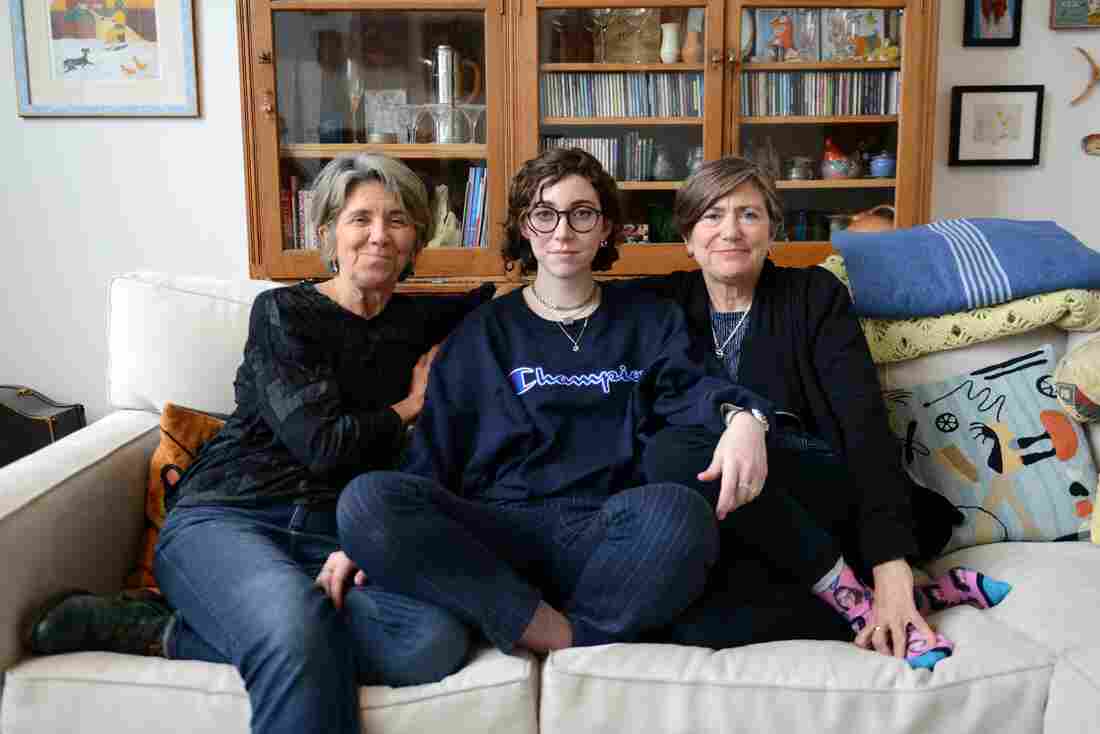 Hillary and Julie Goodridge with their daughter, Annie (center). "It was a lot of stress for all of us, all the time," says Annie, now 23, of her parents' involvement in the lawsuit that made same-sex marriages legal. "When you have to be on all the time, it's hard to turn yourself off." Meredith Nierman/WGBH hide caption 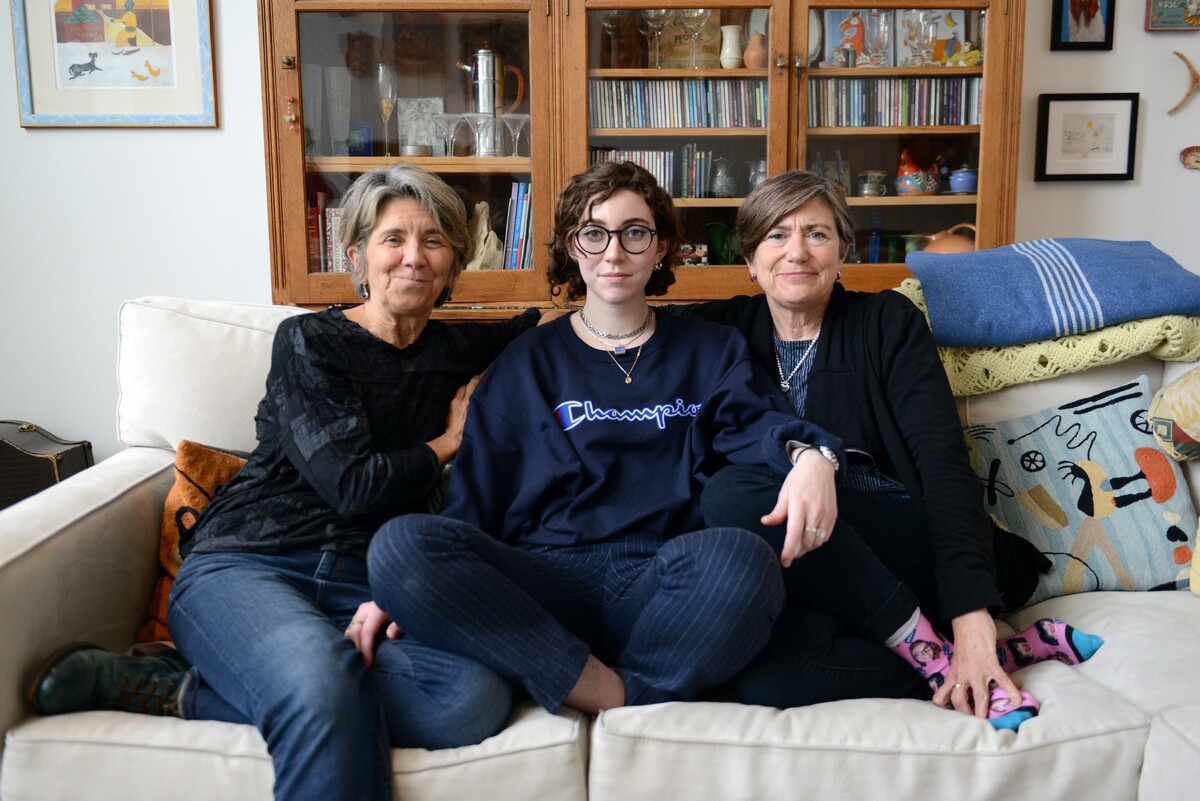 Hillary and Julie Goodridge with their daughter, Annie (center). "It was a lot of stress for all of us, all the time," says Annie, now 23, of her parents' involvement in the lawsuit that made same-sex marriages legal. "When you have to be on all the time, it's hard to turn yourself off."

A few years later, their daughter made a dramatic appearance. She was rushed to the newborn intensive care unit, and Julie, her biological mother, was also in critical condition receiving intensive care. But Hillary was stuck in the hospital's waiting room. With no legal relationship to either of them, she was unable to visit or help make medical decisions.

"It's not like that happened and we thought, 'We have to sue for marriage equality,' " remembers Hillary. But later, that was one of the memories that motivated them to find a way to formalize their relationship, she says.

As the story goes, the immediate impetus was a simple question from 3-year-old Annie: "If you love each other, then why aren't you married?" By the time Annie was 5, they were the named plaintiffs in the lawsuit that would spur a decade of intense national debate.

The trauma of perfection

As the lawsuit gained momentum and the questions of same-sex marriage consumed the country, Hillary and Julie Goodridge say, the pressure mounted and the resistance grew. Now, with 15 years of distance, they say the trauma they experienced during that time took a few different forms.

Initially, Hillary says, they felt the pressure to be perfect.

It was "the stress of feeling like I have the entire community resting on our being likeable," she says. Every TV outlet wanted shots of Hillary flipping pancakes, Julie ironing, and Annie eating breakfast.

"We had to look like the girls who could be next door," says Hillary. "Not too threatening." No leather. No piercings. Just two moms and their curly-haired daughter.

The trauma of being a target

The Goodridge lawsuit became a call to arms for opponents of same-sex marriage, including then-President George W. Bush. In his 2004 State of the Union address, just a few months after the decision came down, he declared to thunderous applause: "Our nation must defend the sanctity of marriage."

"I remember watching that and thinking, 'Oh my gosh. He's talking about us,' " Hillary says. "It really got crazy very quickly."

Across the country there were efforts to ban same-sex marriage. Forty-one states ultimately limited marriage to heterosexual couples.

In the middle of it all, Hillary got a voicemail from her mother that went something like this: "Hi, darling. Well, I see today you've managed to piss off the pope and the president. But when you get done with that, please give your mother a call."

The pope and the president were pissed off, and soon Annie's playmates were, too. Elementary school classmates refused to come to her house; she was called homophobic slurs; and opponents sent around a flyer.

"It went into our sex life and how we were harming our daughter," recalls Julie. "It was a mass mailing." And Annie remembers, "it was sent to the house of every family that was at my school."

Julie says walking into Annie's school, "we felt a little bit like animals being looked at that were in cages in a zoo."

"We kind of went our separate ways in the house," says Julie.

Annie echoes that sentiment: "When you have to be so public about every tiny detail of your lives, it really exacerbates any minute divide between how you deal with stress and what you need to do at the end of the day."

Hillary and Julie says seeking couples counseling wasn't an option. "We couldn't do that. It felt like too much of a risk. It felt like the word would get out," remembers Julie.

Less than two years after getting married, Hillary and Julie had separated. A few years later, they were divorced. When news of their split was leaked to the media, it sent shock waves through the gay community.

Julie remembers receiving "an incredibly nasty email about how we were going to be destroying the gay community. It went on for several pages. And I just felt like saying, 'This is not what I chose. I'm doing the best I can.' "

"I felt like our family let everyone down," says Annie, who was 10 when her parents separated.

The Supreme Court has now guaranteed same-sex couples the right to marry nationwide. Public opinion has shifted dramatically in support of gay and lesbian marriages. And the Goodridges have been able to step out of the limelight.

The three of them still spend Christmas together. They exchange Mother's Day gifts. When their dog was alive — affectionately named "Mary Bonauto" after their lawyer in the case — they all helped care for her.

And, in some fundamental ways, they still think of themselves a family. "Would I ever consider changing my name? The answer is no," says Julie.

In Julie's office, there's a picture from a gay-pride march. Somebody is holding a sign that said 'Brown Roe and Goodridge.'" Their state lawsuit was printed alongside monumental Supreme Court decisions. "I just kind of love that," Julie says.

Then, they tell a story: A few weeks ago, a waitress at a nearby restaurant showed them pictures of her wedding. Looking at the shots, they saw two smiling brides staring back.

"I remember thinking, 'She has absolutely no idea who we are.' And that's what was kind of great," says Julie. "She was just showing us because she could and she felt comfortable to bring her pictures to her place of work."

"Every single time that I scrolled through them, I would cry a little bit because you would see they're so happy and you feel like you had a part in that," says Annie.

After all, the Goodridges say, it is nice to have their family name stamped on something that made so many gay couples happy.