Accessibility links
What's Behind Redactions In Robert Mueller Russia Investigation Report The House is waging a political war with the Justice Department over the full results of the Russia investigation. If Congress wins, here's what more lawmakers — and maybe, Americans — could learn. 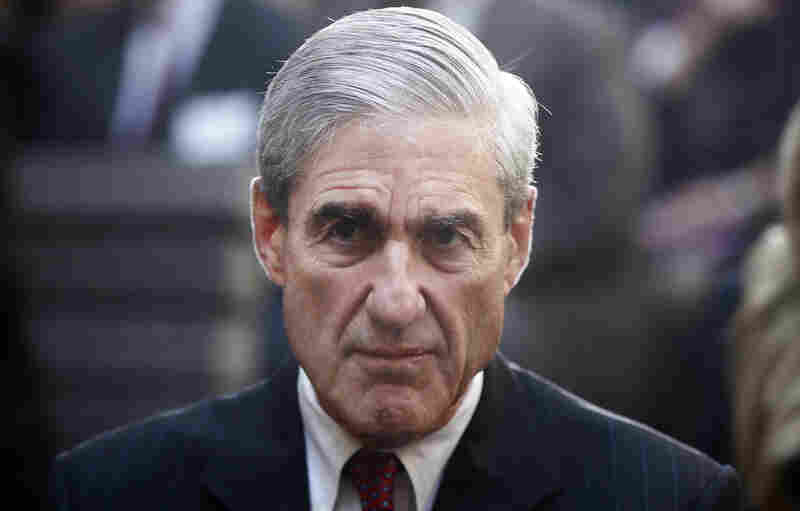 Congress and the public have only seen a portion of the final report filed by Justice Department special counsel Robert Mueller. If the full document ever appears, it could reveal more information. Charles Dharapak/AP hide caption 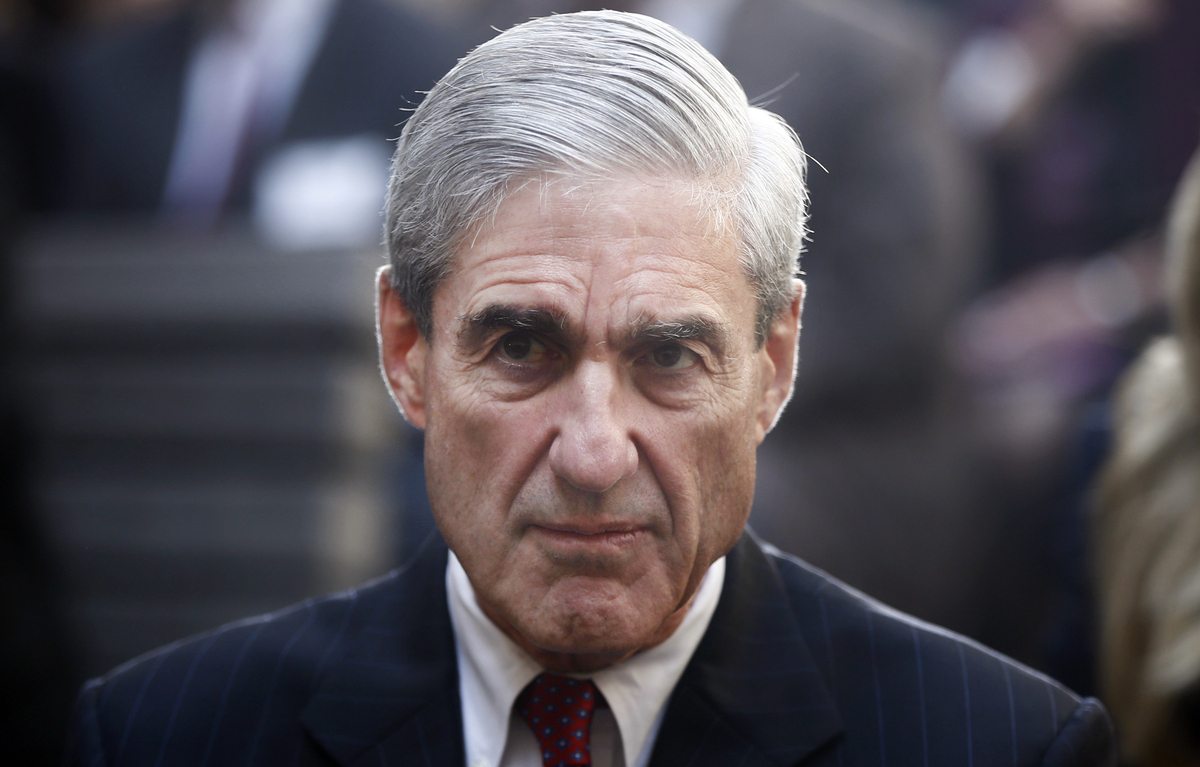 Congress and the public have only seen a portion of the final report filed by Justice Department special counsel Robert Mueller. If the full document ever appears, it could reveal more information.

What's behind all the black bars in Robert Mueller's investigation report? Members of Congress could get an answer — eventually.

Congressional Democrats are gearing up to escalate their political war with the Justice Department over access to Mueller's full report. The House of Representatives could soon vote to hold the attorney general, or others, in contempt of Congress.

That dispute could go to court, and there's no telling how long it might take to resolve. But if lawmakers eventually won, they — and potentially the public — could learn more about what Mueller uncovered during his roughly 22-month investigation.

A federal judge already has ordered the government to unveil the redacted portions of the report, and other materials, that pertain to former national security adviser Michael Flynn, as part of prospective sentencing. Flynn pleaded guilty to lying to investigators but has been cooperating with them.

Here are some other important redacted portions of Mueller's report, why they're obscured and what they might reveal if they were ever unmasked. Click on the images or links below to see the excerpts in the context of the full report.

This redacted section raises as many questions as it answers.

What underpinned the strategy used by Russia's "Internet Research Agency" in organizing the "dozens" of rallies that investigators have connected with its outreach?

The last readable passage here before the redaction says the "reach and success of these rallies was closely monitored" — suggesting this aspect of the campaign wasn't haphazard. The page that follows this one in the document is fully blacked out.

What prompted the Russians to select particular locations or themes? Who was responsible for driving this aspect of the interference?

Investigators say they didn't find any Americans who helped organize these real-life rallies who knew they were dealing with foreigners overseas.

Although that suggested there was no conspiracy with anyone inside the United States, it also reinforces how difficult it might be to keep the Russians or another foreign power from interfering in this way again.

All it took was for these influence-mongers to pose as Americans on Facebook and reach out to real politically active Americans to seek their help in gathering people, organizing venues — and even hiring people to dress up or otherwise perform.

Russian political interference specialists didn't only rely on social media agitation. They also made substantial use of cyberattacks, including those that focused on state-level elections officials, their vendors and others.

This section suggests the U.S. intelligence community knows a great deal more about these cyberattacks. But revealing how American authorities learn about what happened would compromise "investigative techniques," according to this, so this section is heavily redacted. 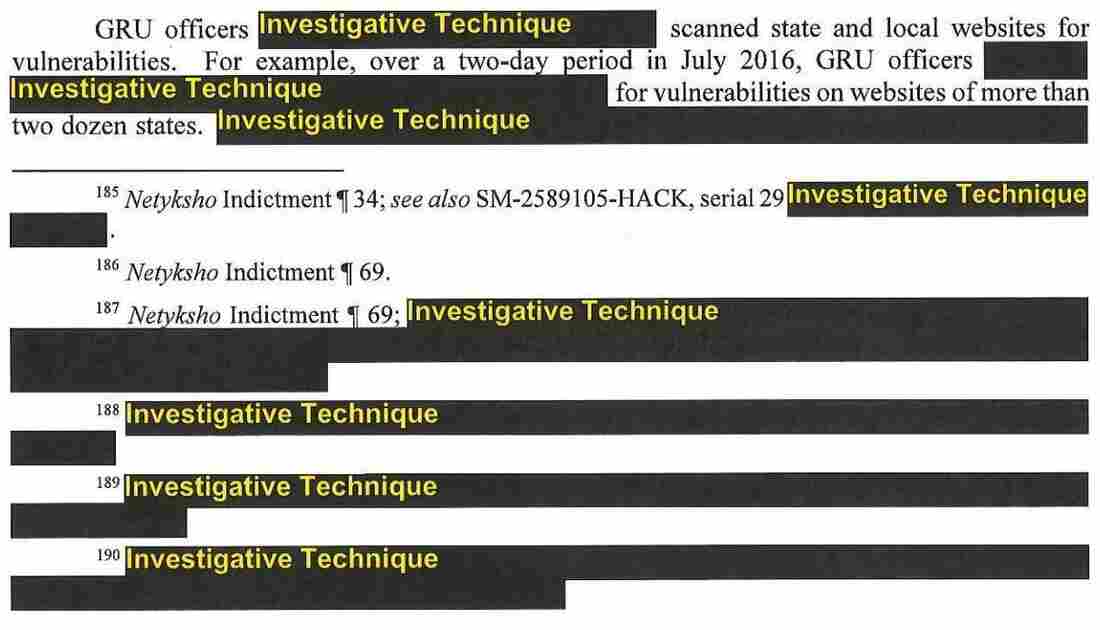 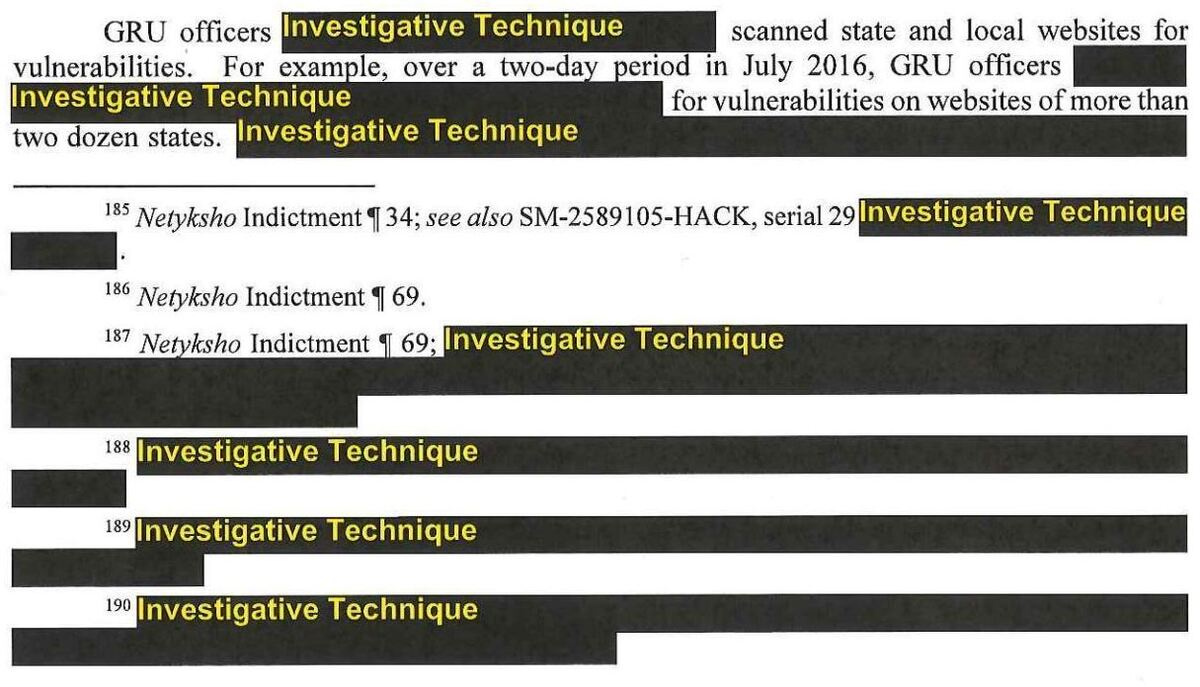 State and local elections officials have complained since 2016 that they were kept in the dark about these attacks and they still aren't overjoyed about their relationship with the FBI or the Department of Homeland Security.

Federal officials, meanwhile, have said they're often constrained about what they can reveal — because of "investigative techniques" or other reasons.

For example, Florida Gov. Ron DeSantis only just revealed that two counties in his state had been compromised by cyberattacks — but said he couldn't say which ones or discuss more about the briefing he'd received from the FBI.

Passages like this one, if it were ever revealed in full, would give a fascinating look not only into how widespread American cyber-vulnerabilities were in the last presidential election, but how much the FBI and National Security Agency know about them.

The most famous Russian cyberattacks were the ones that yielded a huge trove of stolen data from political targets across the United States, especially Democrats.

Russia's military intelligence agency, the GRU, released some of what it stole on its own and gave some other material to WikiLeaks. Trump's campaign was apparently so pleased about WikiLeaks' disclosures that it sought to find out more about what was coming so that it could exploit it if possible.

This section describes the "excitement" then-campaign chairman Paul Manafort expressed at the prospect of the WikiLeaks releases and how he told then-deputy chairman Rick Gates to keep in touch with someone — possibly political consultant Roger Stone — to try to learn more.

Stone has been charged with lying to Congress and trying to obstruct its investigation as it looked into the potential WikiLeaks connection. He has pleaded not guilty and says he has done nothing wrong.

Regardless of how Trump campaign aides received information about WikiLeaks, they came to expect more releases of stolen material, the report says. The campaign even apparently built that information into its ongoing plans, as this section describes. 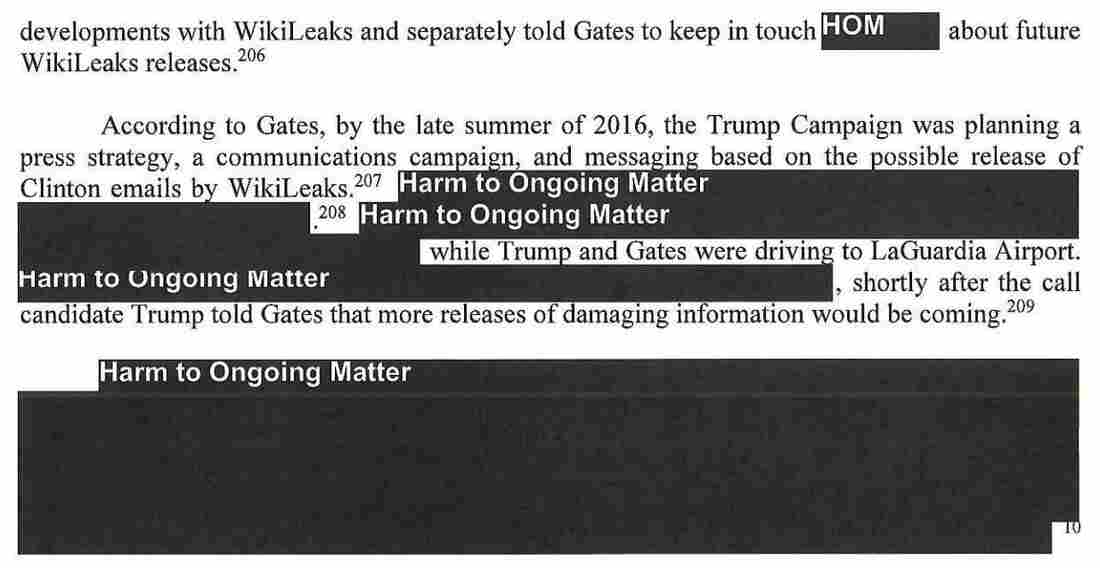 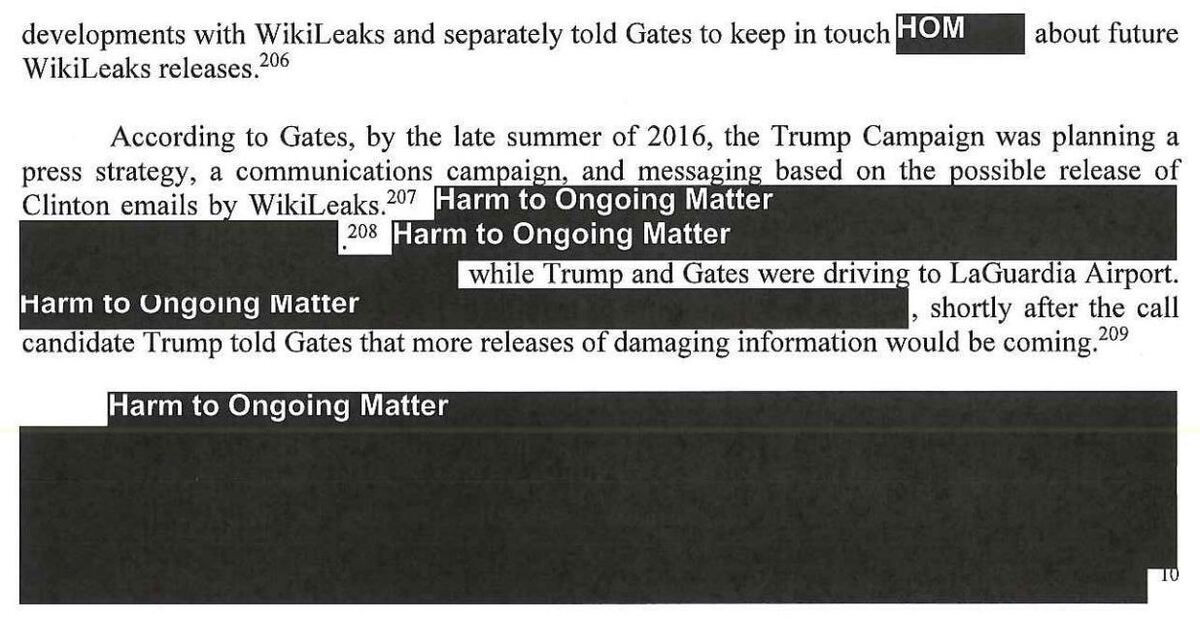 Mueller's office ultimately concluded that this eagerness about WikiLeaks did not amount to a criminal conspiracy.

One subplot from the Russia investigation that may live on the longest in Washington is the story about a junior foreign policy adviser, Carter Page.

Republican critics point to Page's case as an example of what they call abuse of power by the FBI and Justice Department in 2016. Officials collected Page's communications — including after Trump's inauguration — based in part on questions about Page's contacts with Russians. But Page hasn't faced any criminal charges.

All the same, the exact nature of Page's activities remains unclear, as this section describes. Neither House intelligence committee investigators nor Mueller's office ever have said they fully understand exactly what he did.

Another subplot from the Russia investigation that continues to live on: the story of Donald Trump Jr. hosting a delegation of Russians at Trump Tower following a promise that he would get "dirt" on Hillary Clinton.

The Justice Department concluded that Trump Jr. and the other participants — Manafort and Trump Jr.'s brother-in-law, Jared Kushner — won't be facing criminal charges connected with the meeting.

Some questions about it and the subsequent investigation, however, remain unresolved, including whether Trump Jr. might have invoked his Fifth Amendment privilege not to give evidence to a grand jury. That's what's suggested by the redaction in this section.

Trump Jr. has the right under the Constitution not to testify like any other citizen — but if Democrats could establish for certain that he had declined, that could become the basis for political attacks on him and the president.

Trump has been contemptuous about the Fifth Amendment in the past, suggesting that people who use it have no other reason but to conceal their guilt.

Grand jury material, however, is secret — which is why this section is redacted and why the attorney general, William Barr, says he can't reveal anything about it to anyone, including members of Congress. That is one basis for the slow-burning showdown between Barr and the House Judiciary Committee.

Trump Jr., meanwhile, may be asked about the Trump Tower meeting by members of Congress before the end to the dispute between House Democrats and the administration. Trump Jr. has agreed to respond to a subpoena by the Senate intelligence committee and talk with members of Congress.

That session could reveal yet more about the Russia saga well before the dispute about the full Mueller report is resolved.