Accessibility links
NPR Review: 'Rules For Visiting,' By Jessica Francis Kane Jessica Francis Kane's new novel follows a prickly, 40-something gardener who — inspired by the friendless fate of Beowulf's monstrous Grendel — decides to reconnect with four of her oldest friends. 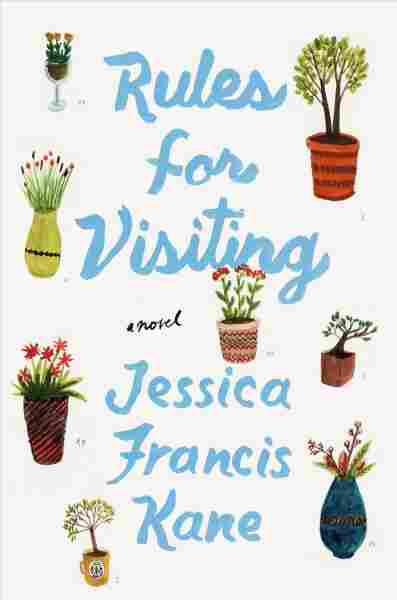 It's been a minute since I've read a book whose narrator I didn't like at first. Maybe it's because some part of me, the perfectionist hungry to be loved and eager to be accepted, shies away from protagonists who don't care about such things. Maybe I just haven't been reading many narratives told in first person recently. Probably, it's a mix of both. The night before I write this, a friend asked me to list what about me could possibly be unlikeable, and I had to laugh — if I began that list, I wouldn't stop — but her question reminded me that I deeply fear being disliked, a fear that threatens to spill over into judgment. In preparation for this review, I decided to reread Roxane Gay's essay on the subject of unlikeable female protagonists, where she suggests that "unlikable characters, the ones who are the most human, are also the ones who are the most alive. Perhaps this intimacy makes us uncomfortable because we don't dare be so alive."

May Attaway, the narrator of Jessica Francis Kane's Rules for Visiting, is not very likeable — at least at first. On the book's second page, she stumbles over the end of a moving walkway at an airport, nearly tripping a young mother behind her: "I apologized, she swore at me from behind her stroller (the child was young, and, I hoped, deaf), and I rolled my suitcase off to the side, out of pedestrian traffic." Everything about this rubbed me the wrong way, for reasons I can barely articulate — did I want May to grovel, not merely apologize? Was it her throwaway comment on the child — a strange tic that feels insensitive to the complexity of the deaf community not to mention silly, because swear words don't harm children — that bothered me? Whatever it was, I was pretty quickly disposed against her. She's prickly and judgmental and sort of cold, and my initial reaction to her is, I suspect, exactly what Kane was hoping for.

May is a 40-year-old gardener who lives in the house she grew up in, with her 80-year-old father occupying the basement — his choice, not hers. May's mother died at age 40, and it is this parallel that, among other things, seems to kick off the narrator's decision to change some things about her life. The other catalyst is a series of events at work that find May rewarded with a month's worth of paid leave days to use however she wants. After much musing over the meaning and definition of friendship, May plans four visits to women who have been her friends, but with whom she doesn't really keep in touch: Two are from her childhood, a third is from college, and the fourth is from graduate school.

One of the reasons friendship is on May's mind is that she's been thinking about how friendless people are made into monsters. A fan of old epics and a dabbler in linguistics, May shares her thoughts about Beowulf, summarizing it as "a violent epic about the dangers of being friendless. There's a party. The misfit is not invited, he sulks outside, then comes in, wreaks havoc, and is killed. Quite simply: Without friendship, you become Grendel."

By the end of the book, I loved May as a character, and I understood her; she reveals elements of her own history and choices slowly, in dribs and drabs.

But this isn't a book about the easy intimacy of women's friendships; these visits don't save May from some kind of sad or lonely life, nor do they always affirm the friendships themselves. They're complicated, like May is, because — and I don't mean this in a simplistic way — life is complicated. One of her friends is going through a divorce when May visits, while another is a new wife and a stepmom to two boys, and in both cases, May is aware of how her presence is changing the dynamics of their daily lives. She recognizes the generosity in this, and tries to make herself fit into their space so as to be the least bother. She sees her friends, even if she doesn't always understand their choices, and in this way, she is generous too.

Rules for Visiting has too many fun, hilarious, and extremely touching twists and turns to detail further here, and its coming out right around Mother's Day is no coincidence. By the end of the book, I loved May as a character, and I understood her; she reveals elements of her own history and choices slowly, in dribs and drabs. She doesn't need me to like her, though. She has her plants, her father, some new or revitalized friendships, and her own sharp and witty mind to keep her company. She is no Grendel — only a deeply alive human.